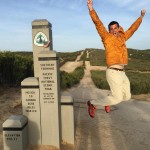 A Great Day For Trail Magic

After having a leisurely day on Sunday it was time to Pay It Forward to the PCT Class of 2017. A stop at Smart N Final yielded two large watermelons, popsicles, and three dozen sodas. I needed to kill about 15 minutes before three large pizzas were ready next door at Little Ceasars. The plan was to drive about 20 minutes up and over into Bouquet Canyon. A perfect spot in between Agua Dulce and Casa de Luna. Temperatures were forecasted to be in the 90’s and with a water cache just off the road odds were that it would be easy to surprise a group of hikers. When I rolled up around 11:30am the sound of talking in the distance was promising. As I walked over a group of nearly a dozen people were lounging in the shade.  “Do you guys want some trail magic?” The cheering ensued and a couple people helped carry everything across the road. I never had the pleasure of eating any pizza on trail in 2016 but I can imagine it was pretty damn amazing. I also, made sure all of the sodas (Coca-Cola, Sprite, and Lemonade) were ice cold. Plus, the watermelon and popsicles were a hit. After visiting for awhile I decided to break out my umbrella and hike a little ways south bounding to see if any other hikers were going to roll in. It was nice to be walking alone on the PCT in the desert heat. My precious shade and a slight breeze made it tolerable but since I wasn’t carrying any extra water only went up a little over a mile. 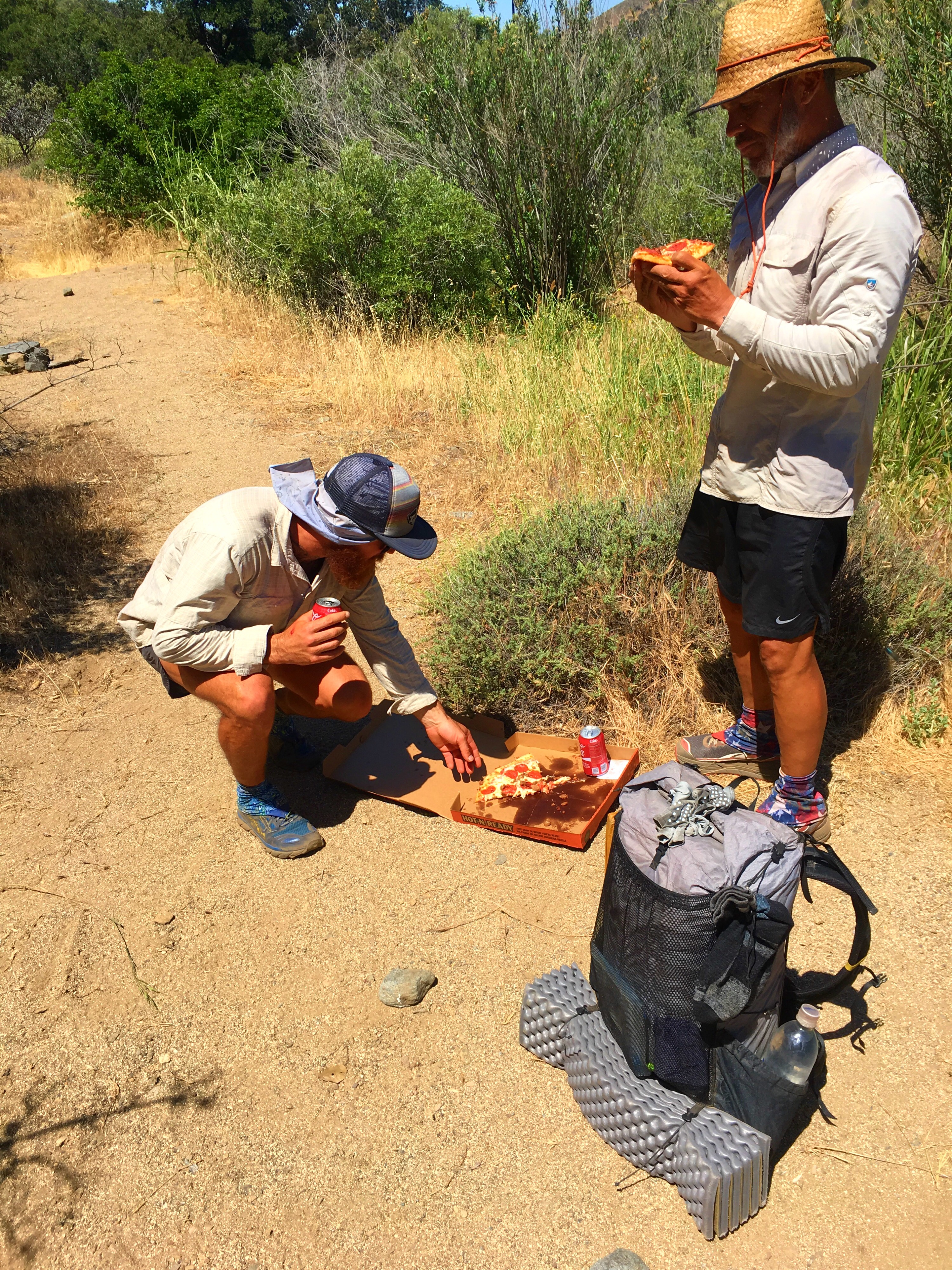 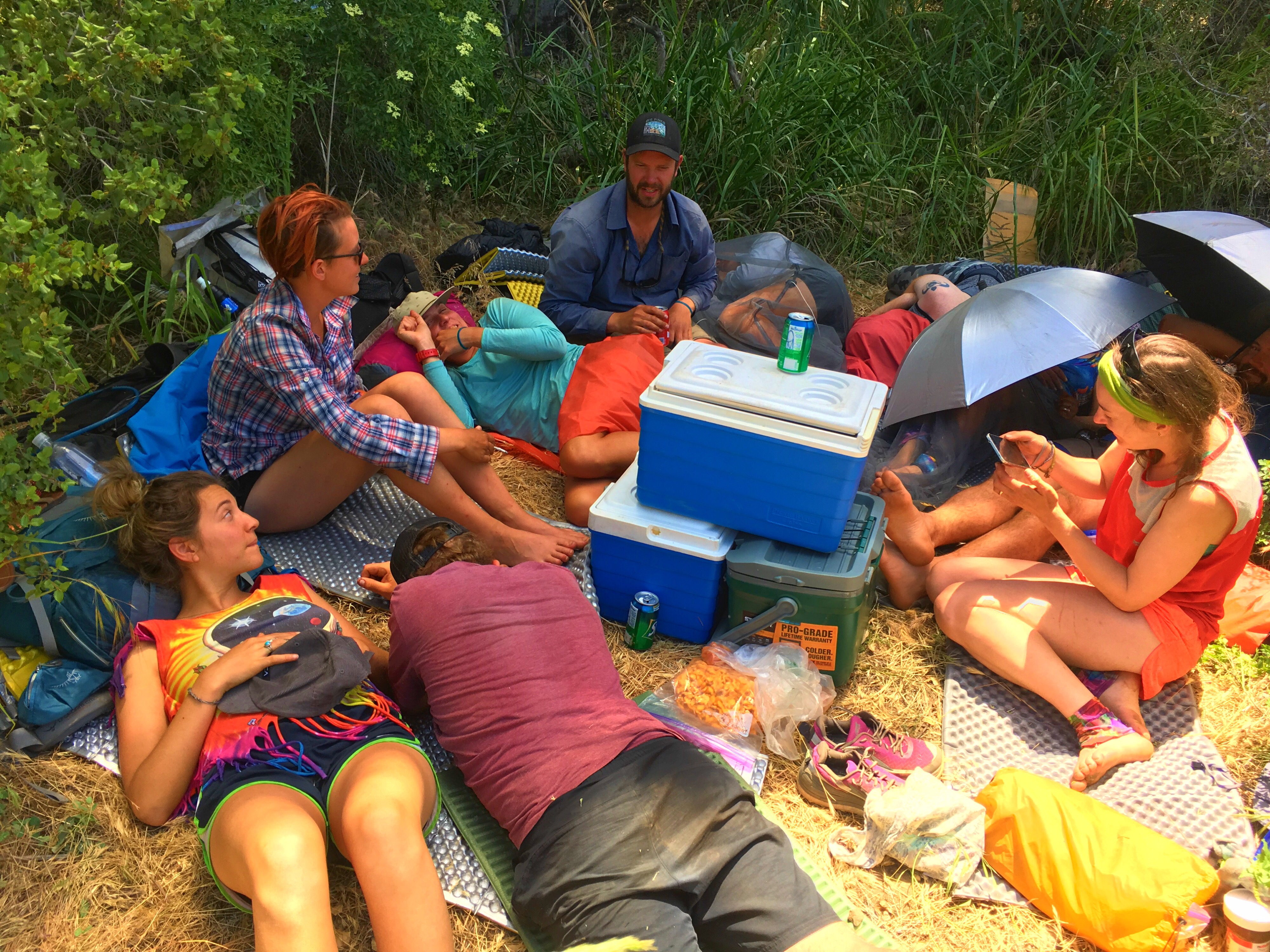 Afternoon Siesta In The Shade

A short time later two more groups rolled in and were thrilled with the simple surprise of cold beverages in the desert. We chatted for a little while. I offered up some encouragement for the remaining miles and was asked what advice I’d offer as a finisher. This year the snow pack is nearly double from last season. So the conversation naturally steered towards the Sierra snowpack, climbing over the passes, and creek crossings. I told them to stay positive and keep a sharp mental focus. Don’t get caught up in all the negativity and worrying about what lies ahead. Hikers made it through in 2011 in an even higher snow year. The time was close to 2pm and my next objective was to drive around the mountain and help shuttle hikers down to Casa de Luna. It was only a little over 20 minutes away. A few hikers even were thrilled with the thought of potentially seeing me twice in one day. Managed to surprise one final Hiker before driving off. 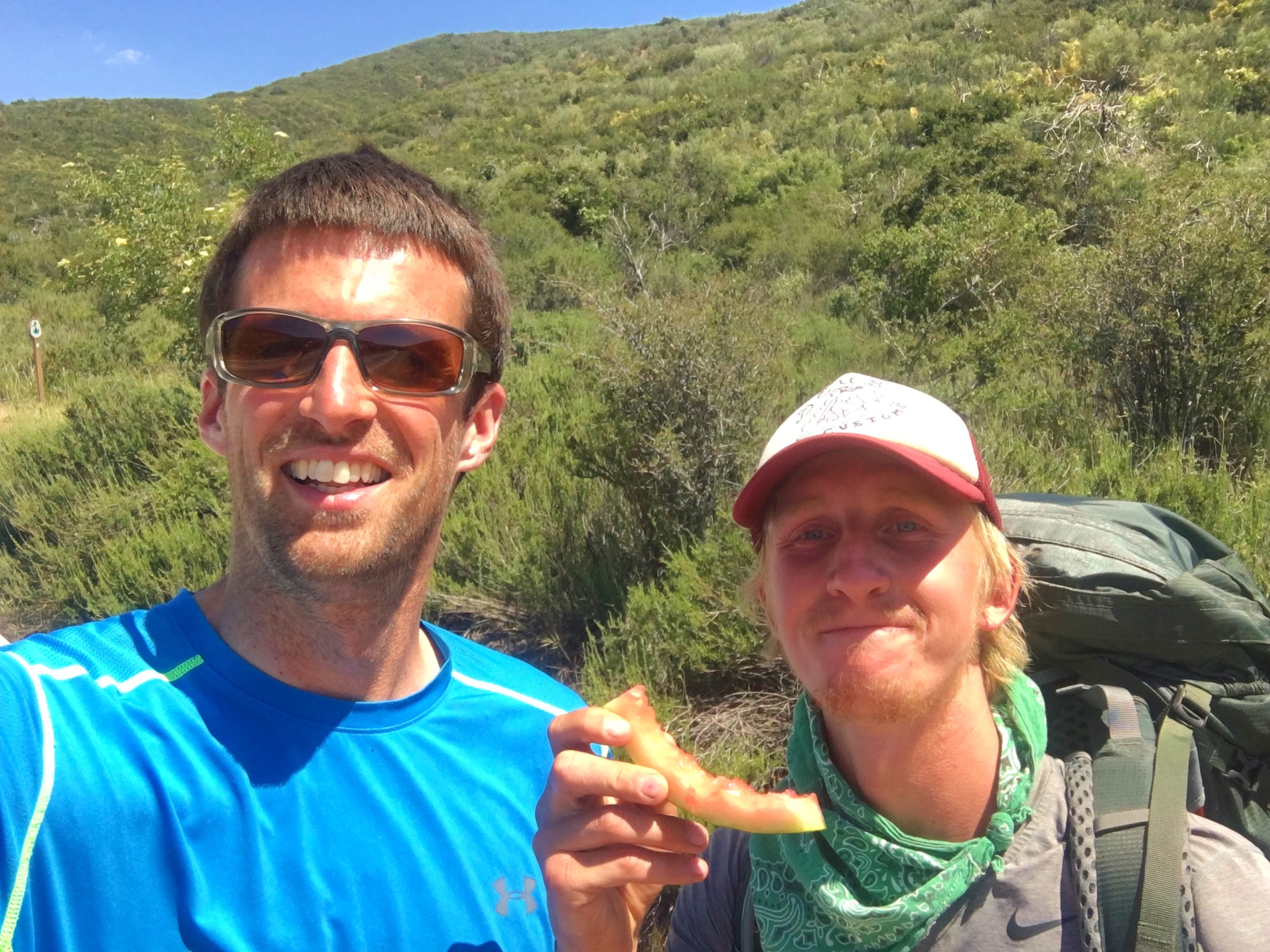 Bear Can Was Thrilled, Caught Him Just As I Was Ready To Leave 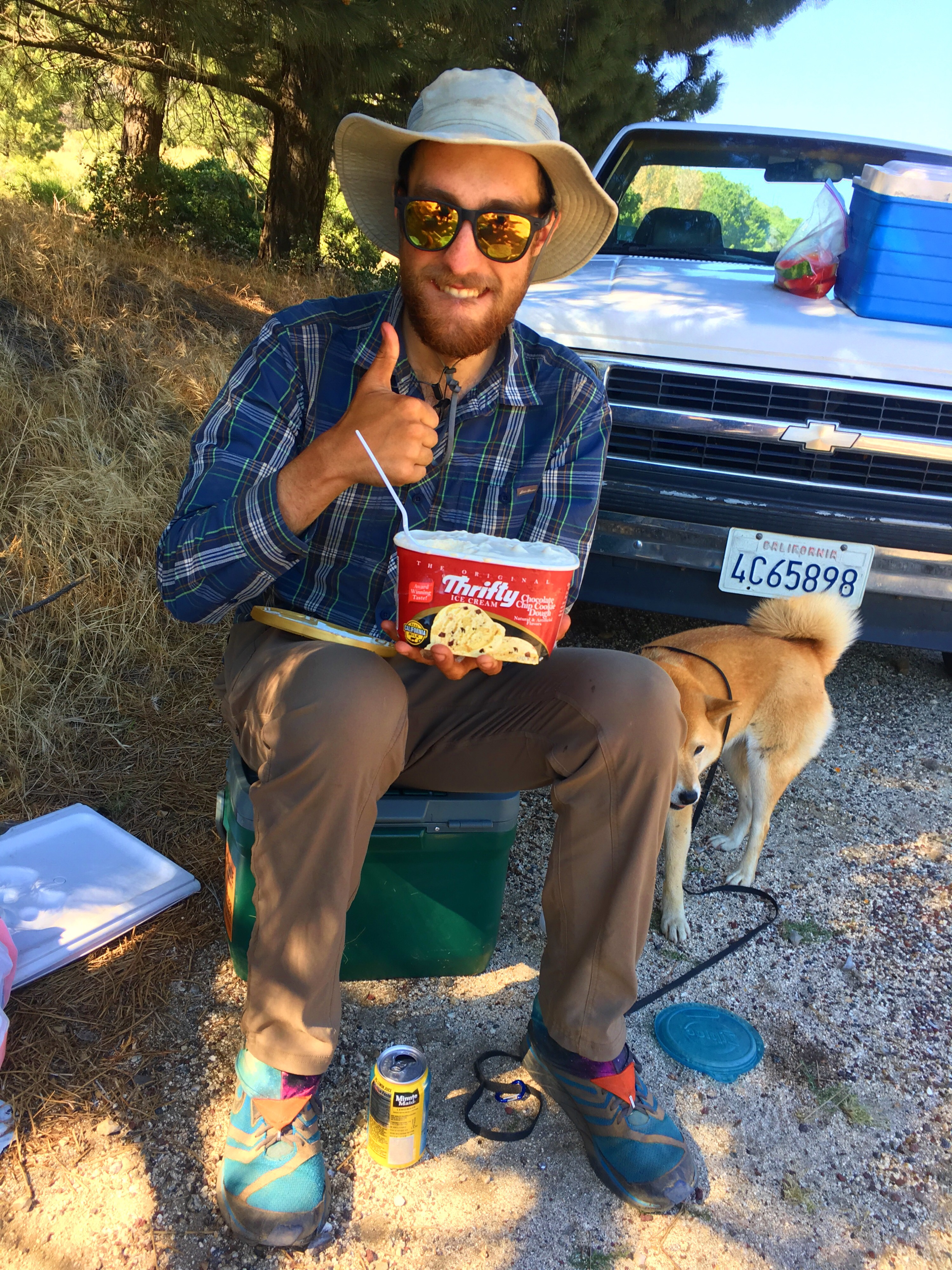 “Do You Want Some Ice Cream?” Umm…Yeah Dude ?

With no cell service and running low on gas my first task was to find a place to refuel in Green Valley. A small group of hikers were clearly enjoying themselves in the classic “Hawaiian t-shirt” look. So, I offered a ride in exchange for finding directions to Casa de Luna. Which was only a few blocks away. After that I shuttled another group back to the store and picked up some more sodas then at the last minute splurged on some ice cream. Most of the popsicles were eaten earlier but they only lasted two hours in the cooler. After driving a couple of hikers from Israel back to the fire station it was over a half an hour wait in the shade. A perfect opportunity to work on a little blogging. I’m starting to write again and anybody whose typed on their phone knows that it tasks some time and discipline. Not long a young man from Germany showed up. “Are you the guy who brought pizzas? I just missed you by a couple of minutes.” He was out of water and very thirsty so eagerly downed a soda, and a couple slices of watermelon. Then politely asked if he could have another Sprite. More and more hikers rolled in. Even a few that I saw earlier that afternoon. There was barely enough room in the back of the pick up to shuttle hikers and Packs down the hill. I clearly remember road walking this stretch last year. At one point a woman driving in a convertible BMW stopped to ask, “Why are all these people walking along the road?” Then after I explained what the PCT was she just drove off. Seriously, WTF?? Funny that I ended up making five trips to Casa de Luna.  Overall, it was a very gratifying experience to help out some PCT Hikers. Who knows I might see some of them further up the trail…. 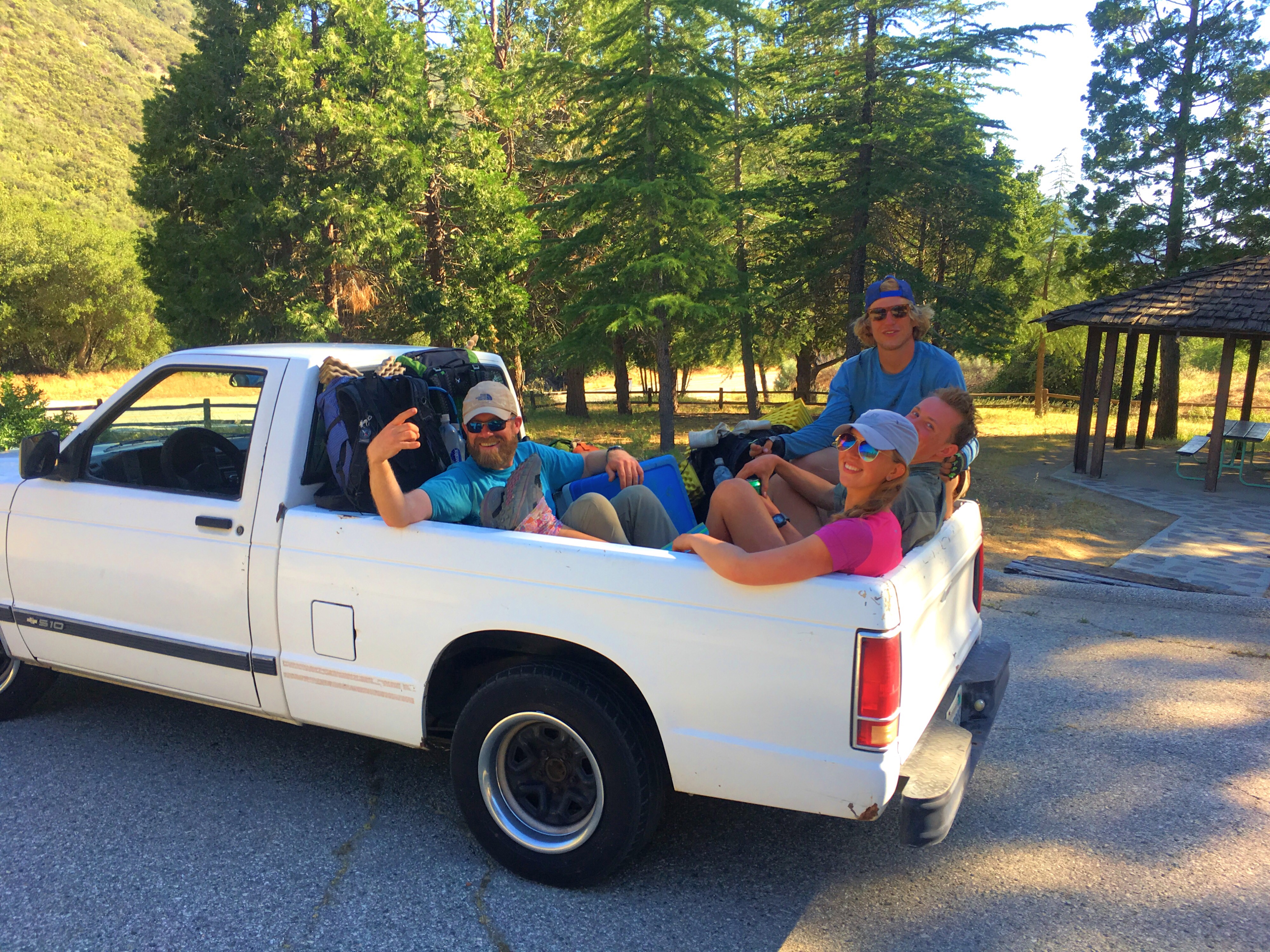