A Left Turn at Hikertown

The Kern Motel in Lake Isabella was cheap, clean, and comfortable. I woke up at five, and after a breakfast of Zebra Cake Rolls, walked to the bus stop. I was the only person on the six a.m. bus, and an hour later, the only person on trail. Smoke from the fires in Sequoia National Park had thickened by late morning, as I was crossing the crest of the Scodie Mountains. The crest is a wide plateau rather than a sharp ridgeline, so I wouldn’t have been able to see very far anyway. Early afternoon, the trail dropped back down into the desert, and the pine trees were quickly outnumbered by Joshua trees.

The next day would be the last time I’d see wildfire smoke. After climbing out of the desert, I stopped for a late lunch at Landers Campground. There’s a huge spring-fed fire-tank there, and its overflow was producing a liter every few seconds. Luxury! I took my time relaxing and rehydrating before setting off to find somewhere to camp. Not long afterward, I met the only person I’d see on that section of trail: a USFS surveyor. He told me about the outbreak of norovirus among NOBOs who’d stayed at Landers Campground in the spring. (At which point, I remembered that filters don’t remove viruses.) Still, I’m pretty sure I would have drunk the water, even if I’d known about the outbreak beforehand. 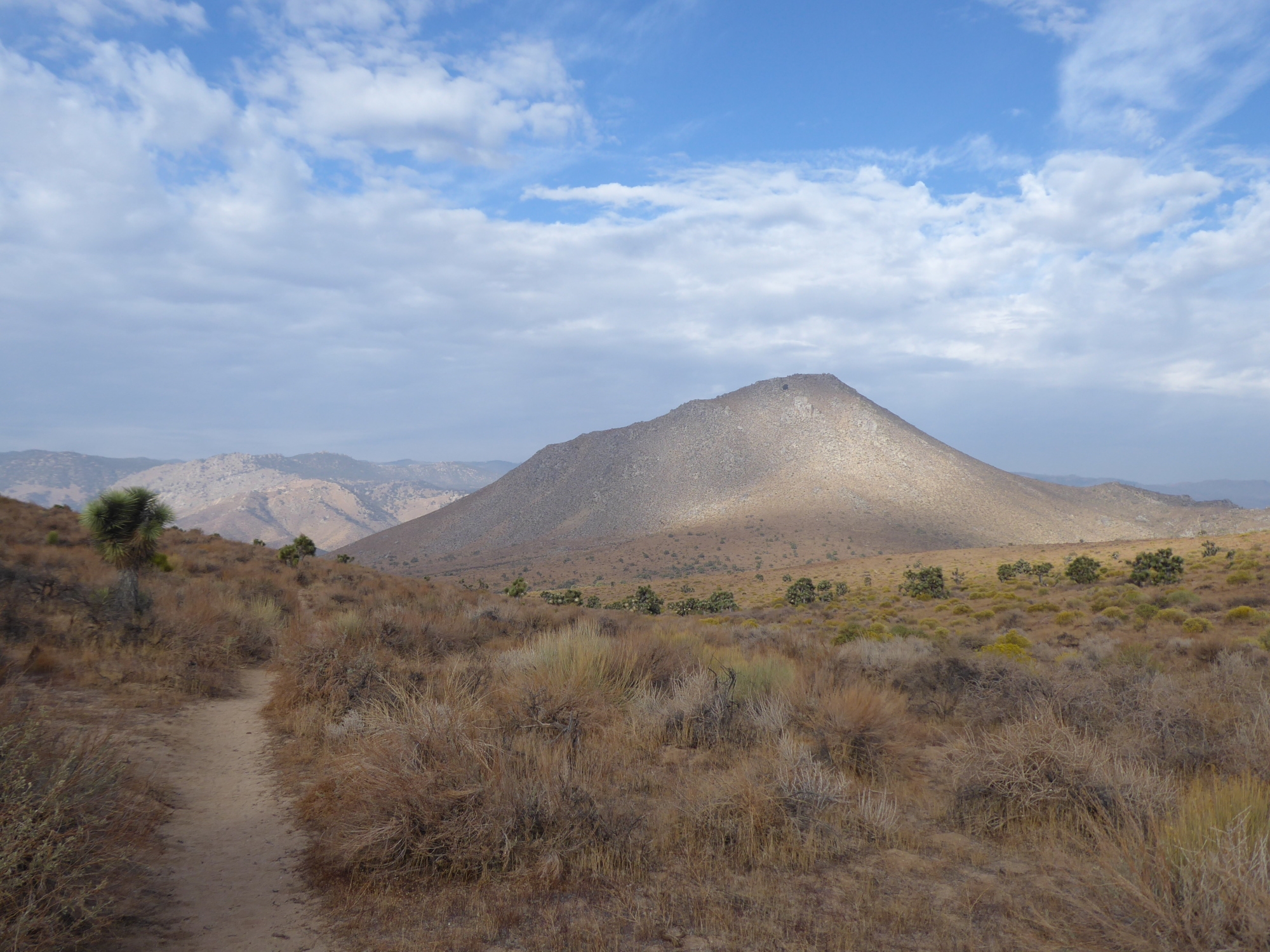 Overcast but warming up.

During the next few days, I began to realize that southern California has only two wind-speed settings: “Off,” and “Gale Force.” Since rejoining the PCT at Cottonwood Pass, I’d experienced only warm weather and very little wind. That all changed as I neared Tehachapi Pass. Noisy wind turbines sprouted from the landscape, and shelter from the wind became my top campsite priority. I only had to get up once in the middle of the night to replace tent stakes before learning my lesson.

After a wind-assisted descent to Highway 58, I checked the bus timetable and saw that I was in luck. I called Kern Transit to request a pickup at Cameron Canyon Road and had to wait less than an hour before a passing bus stopped for me. My thanks to Alania, one of the passengers, who gave me my fare when I discovered that I didn’t have the exact change. In Tehachapi, I completed the usual town activities: lunch, check-in, shower, laundry, resupply. (Walmart had a surprisingly large selection of trail-mixes.) Back at the hotel, I checked the regional weather forecast for the next few days. “Sustained winds of 60 mph, gusting 90 mph in places.”

The next day was the calm before the storm. I was back on trail mid-morning, under a hot sun and almost no breeze. An army of wind turbines stood silently in anticipation, and they didn’t have to wait long. That night, the wind returned with a vengeance. The first day of the windstorm was the worst, and it was difficult to remain on the trail at times. I was also constantly blinking the dust from my eyes while peering out from under the floppy brim of my hat. Once, the brim was bent so far down over my eyes that I could only see about three feet of trail in front of me. At the last moment, I managed to avoid stepping on a large California kingsnake.

Looking down into Antelope Valley, the dust plumes made it look like the surface of Mars in a science fiction movie. I descended most of the way to the valley floor and camped about a mile south of Tylerhorse Canyon. It was starting to get dark when two more SOBOs blew into camp: Bunkhouse and Spud (B&S). I didn’t know it at the time, but we’d leapfrog each other all the way to the southern terminus.

The wind had dropped slightly the next day, but the air was cold. I started hiking at sunrise, and after five miles, left the wind turbines behind. The Los Angeles Aqueduct guided me the rest of the way to Hikertown. The place was deserted, but I really enjoyed staying in a cozy little room out of the wind. When B&S arrived, we all went for dinner at Neenach Café & Market. 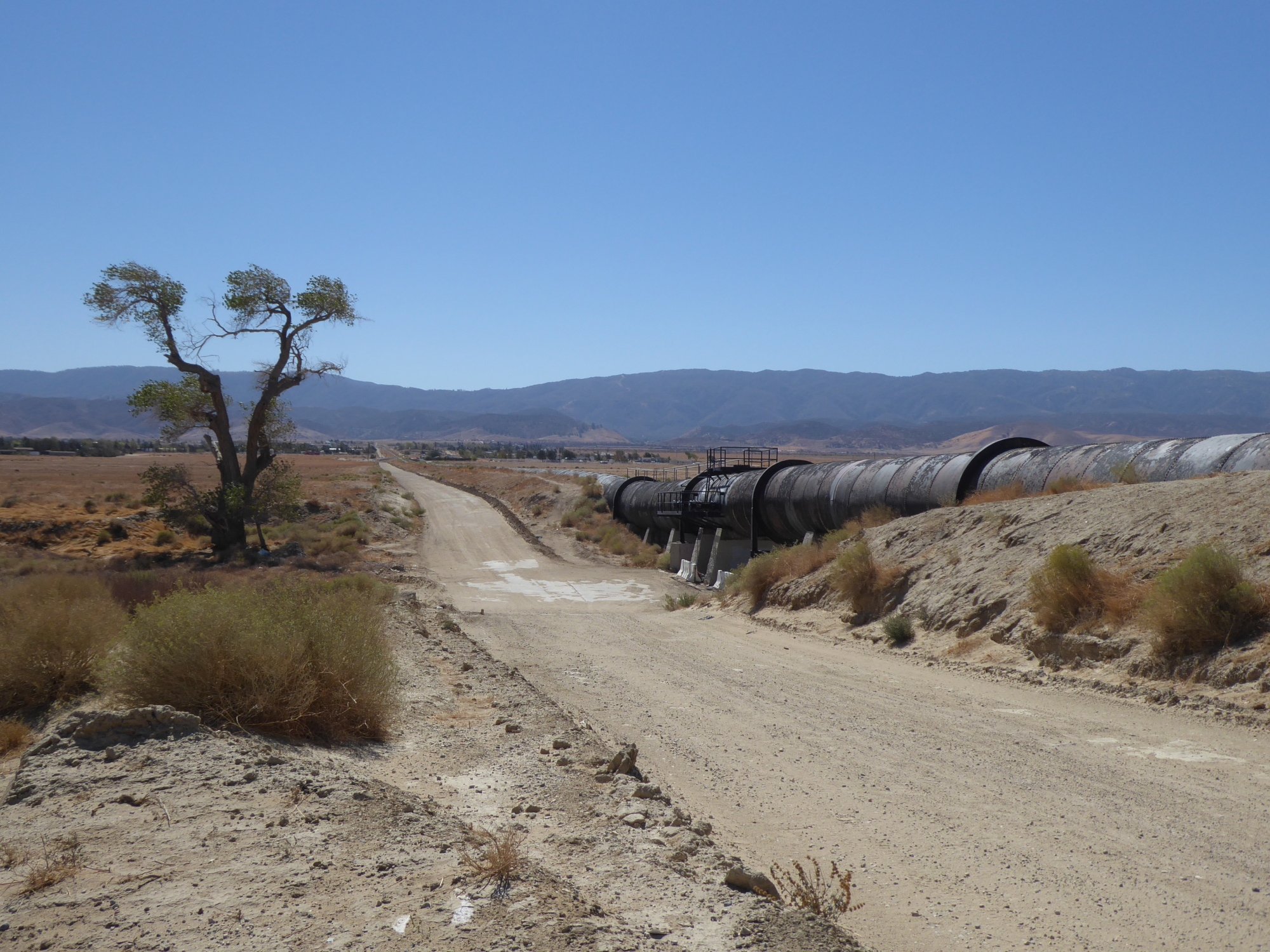 Following the aqueduct to Neenach.

From Cottonwood Pass to the southern terminus, the PCT can be divided into three sections of roughly equal length. The middle section runs east-west rather than north-south. After Hikertown and a 2000 foot climb, I turned east. The trees were autumnal and the weather calm once again. My first southern California zero would be at Acton KOA, and I took the next four days to get there.

On day four, I stopped for breakfast at “Home Made” in Agua Dulce before continuing the walk through town. Vasquez Rocks was hosting the “Spacerock Trail Race” that morning, and the last of the half-marathoners were still out on the course. At times, I felt like a salmon swimming upstream, but stepping aside for the runners was the least I could do. Some of them really looked to be suffering in the hot and windy conditions.

My campsite at the KOA was sheltered, shaded, and a perfect place to spend the next two nights. B&S also camped there for a night, and we shared a couple of large pizzas for dinner. After they departed the next day, I spoke to a local trail angel who gave me a ride to the “New Acton Market.” (Thanks Jim!) Back at the campground, with all of my chores complete, I spent the rest of the afternoon in the gazebo. Just me, feet up, working my way through a six-pack of Blue Moon.

That Monday morning at Acton KOA was noisy. The freight trains were joined by commuter trains, and the road traffic started early too. I got up slightly sooner than planned and hit the trail about half an hour before sunrise. It was cold and cloudy with an occasional hint of rain – perfect weather for the climb into the San Gabriel Mountains.

Evening in the San Gabriel Mountains.