The west becomes a movable feast in the summer, when the mountains aren’t just alive with wildflowers and fauna, but when the nature also becomes EDIBLE. The PCT corridor’s beloved berry season is in full swing by July and runs well into September. So clean the old ramen out of your smelly Talenti jars and take an extended siesta with some of these edible, easy-to-identify, and delicious fruits.

I suppose it goes without saying, but this isn’t an exhaustive list of berries on the PCT by any means. But hopefully, it will serve as a useful introduction to sustainable foraging along the trail. Once you’re comfortable identifying these common edible berries—all of which I found in abundance along the PCT in 2021—it will help you to recognize others (like bilberries, raspberries, and currants).

Obligatory disclaimer: Poisonous berries do exist. If you’re unsure which type of berry you’re looking at, always err on the side of caution rather than risk being sickened by a misidentified fruit. A general rule in berry foraging is that “50% of red berries are edible; 90% of blue, black, or purple berries are edible, and 99% of aggregated berries are edible.”

5 Common Edible Berries of the PCT 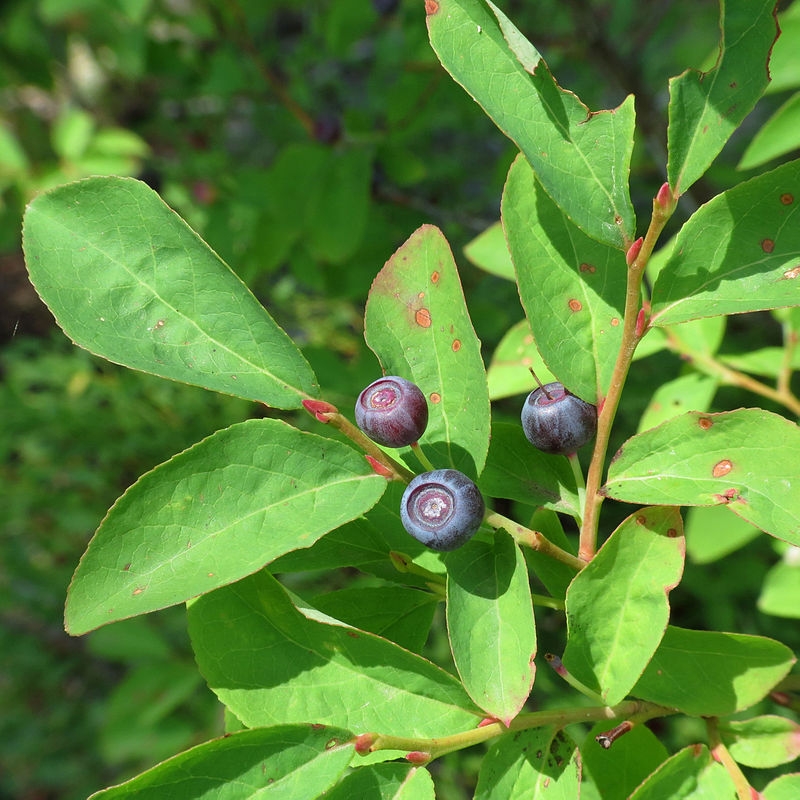 An indicative close-up of mountain huckleberries. Check out that butt. (credit: Wikimedia)

Huckleberry season has to be one of the best parts of the Pacific Northwest (PNW), and you’ll find them growing in abundance throughout most of Oregon and Washington. There are some days on the PCT when you can almost forego all those bars you’re sick of and just snack down on edible berries for hours with impunity. Plus, they make a lovely, tasty substitute for jelly in those infinite peanut butter wraps that are borderline nausea-inducing by this point in the hike.

The mountain huckleberry is the most common, most flavorful, and easiest to recognize of the few varieties in the PNW. Once you’ve got a good idea of what it looks like, you’ll see them growing everywhere. Look for the extremely fine-toothed, ovular leaves, as well as the characteristic “butt” of the berry—which it shares in common with other closely related, edible types of huckleberry. 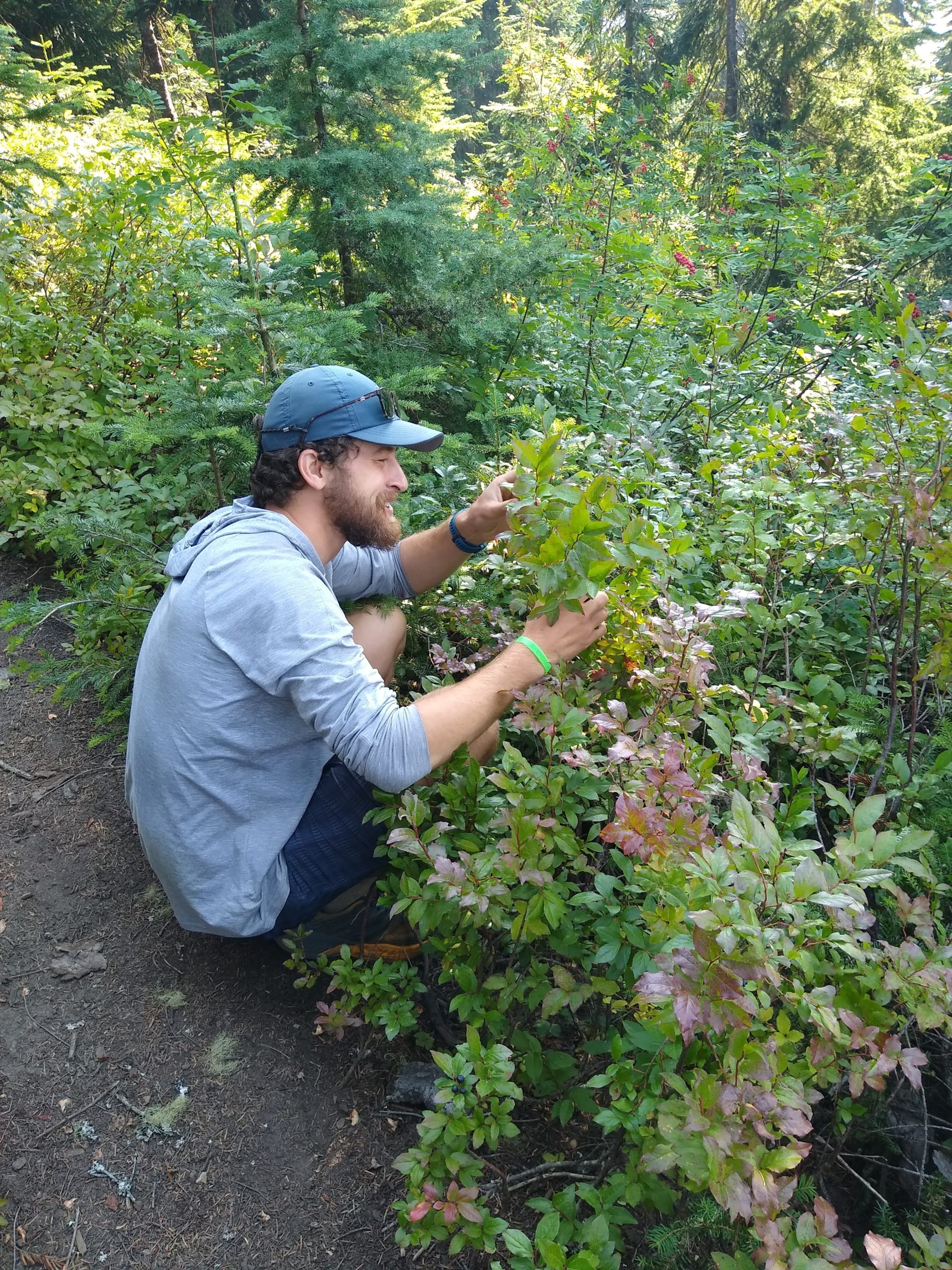 U-pick huckleberries in Washington is fun for the whole tramily, isn’t it? @ryanpetit

Huckleberries are also an important part of the history of the PCT. Near Trout Lake, Washington, the trail passes through the length of Indian Heaven Wilderness, which was named after the abundance of huckleberries in the area, and similarly for the indigenous peoples’ reliance and annual harvests of the berries there. 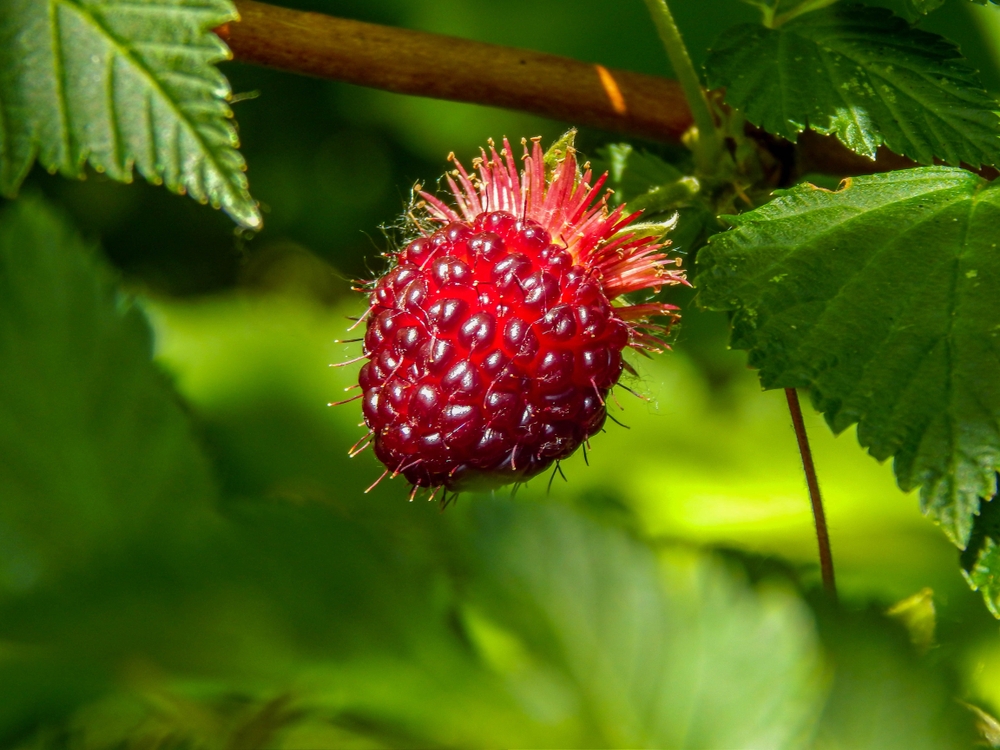 A potentially under-ripe salmonberry, with the characteristic “rocket” look of hairs coming out of the back.

I found salmonberries growing solitarily in a lot of the more temperate, wet pockets of the Cascades, often on the west-facing slopes of mountains. Although they are also aggregate berries and closely related to raspberries and blackberries, they have their own distinct flavor. Since the salmonberry is a “bramble,” it has pointy, serrated leaves, similar to the blackberry as well. Look for the stem and the rocket shape of the hairs sticking out at the end. Once you’ve seen a couple, you won’t have any trouble distinguishing them, but sometimes it can be hard to know if they’re ripe. Their color ranges from pale orange to salmon pink to the deeper red pictured above. The best way to know for sure is how easily the berry is removed from the stem (and the taste).

This berry decidedly does not taste like salmon. Some say it’s so-named because a good crop of salmonberries corresponds to a good run of salmon later in the year—and indeed, the berry and the fish were both found in historically similar habitats. Others say the fruit got its name because it has traditionally been served with salmon or because the pale orange fruits are similar to the color of salmon. Can somebody please invite me to dinner if they’re making this dish? I’ve been wanting to try it for ages, thanks. 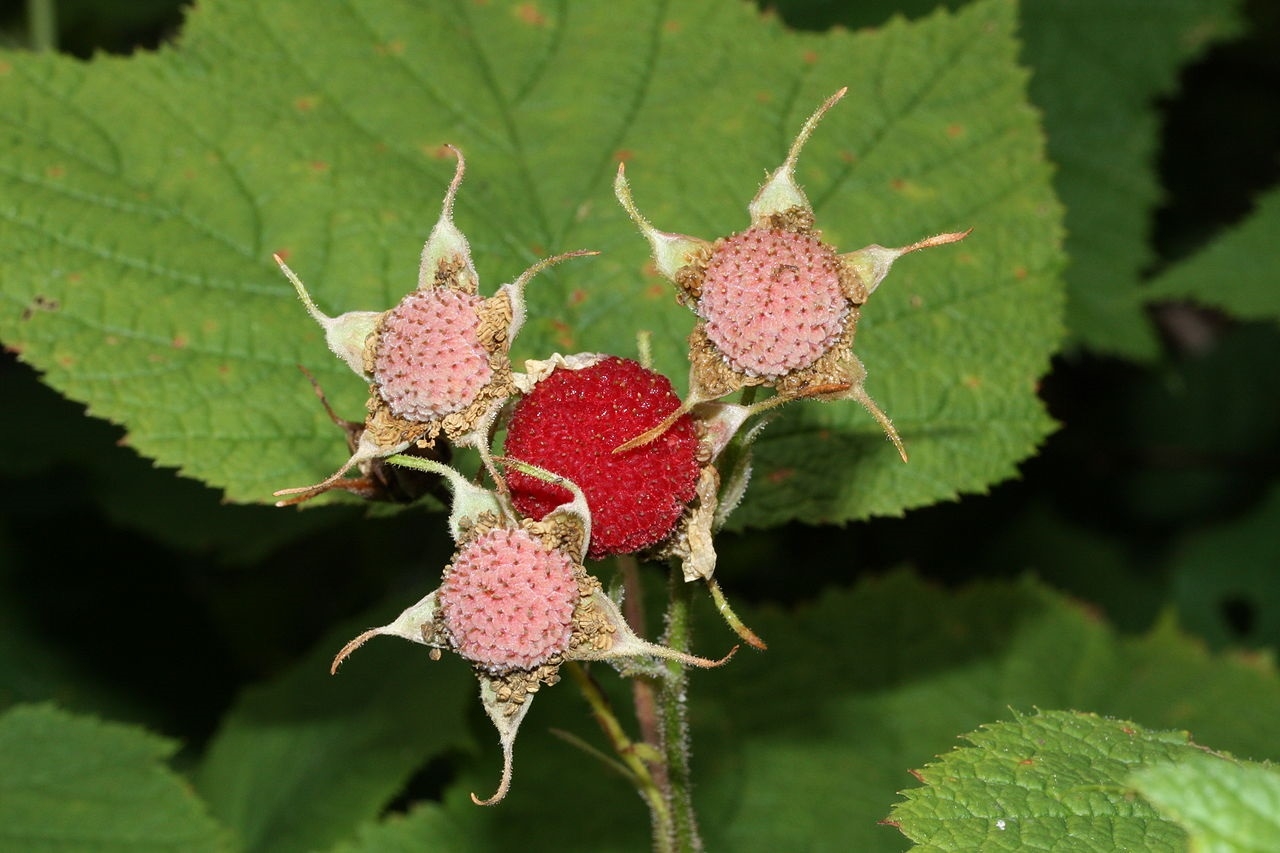 You’ve probably seen a million of these already.

Thimbleberries always reminded me of a little galaxy growing inside of a dying star. I guess it’s probably because of the way the white flower hangs on after it blooms. At any rate, they are closely related to raspberries and have a similar taste to them (although I find the texture a bit more mealy).

You’ll see thimbleberries all over the trail starting in NorCal, and it’s easy to know when they’re ripe to eat because they’ll be that deep shade of vibrant red that’s pictured above. They like sunny spots in mixed deciduous forest, as well as recently burned areas. So you’ll definitely be able to get your fill anytime you like. 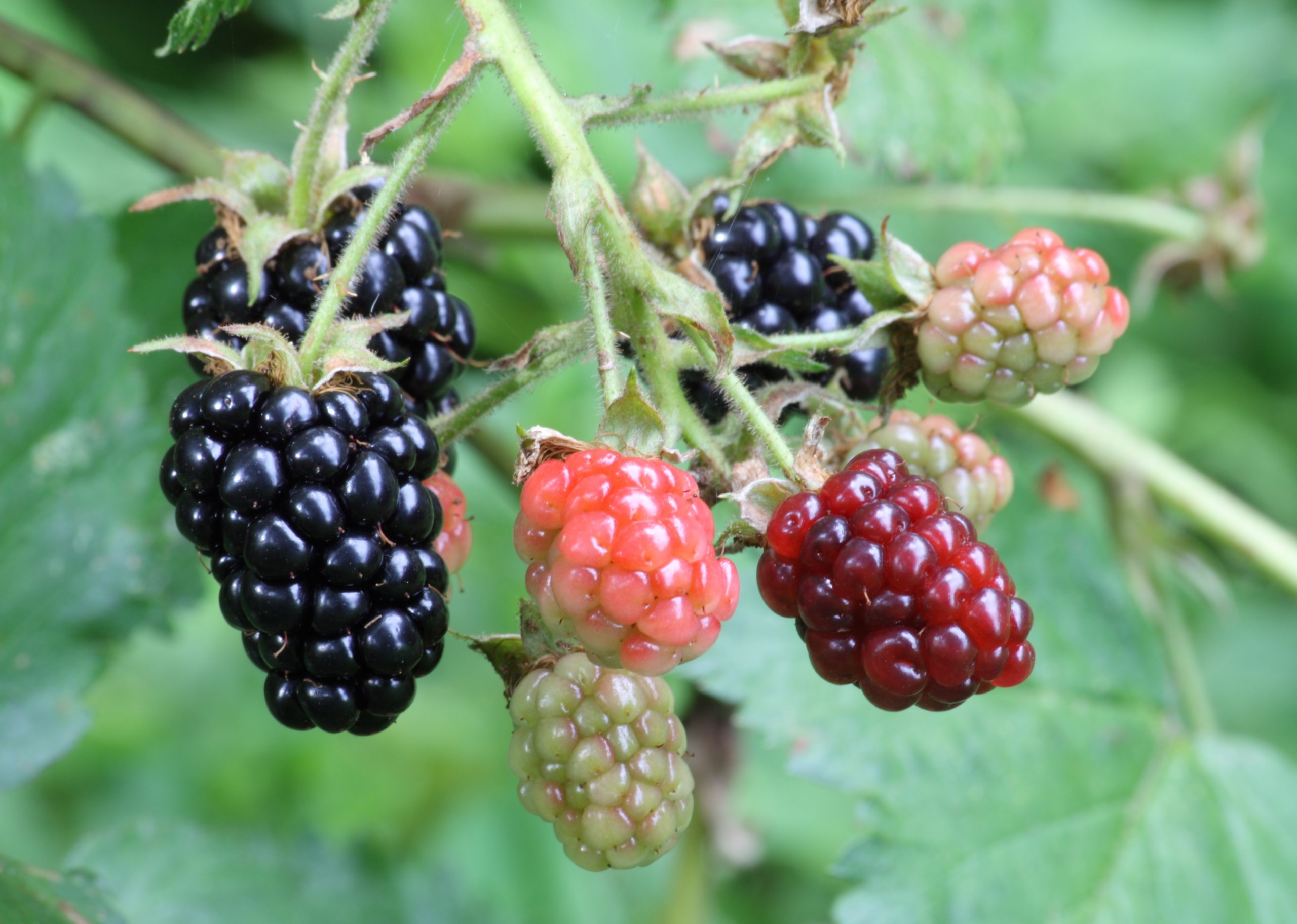 A good indicator of different ripeness levels. The dark berries on the far left should be good to go at that color.

Season: July-September (on the PCT)
Location: Anywhere sunny and “disturbed” from California-Washington
Lookalikes: IDK, maybe mulberries. These guys are pretty unmistakable though.

Once you get well into NorCal, these bad boys grow almost ubiquitously along the trail, especially closer to urban areas. Throw them into oatmeal, a peanut butter wrap, or pair them with a melted-ass Snickers to enter another trash food dimension. Blackberries are another example of aggregate berries with little danger of misidentification or misclassification.

The only lookalike of the blackberry along most of the PCT might be the mulberry, which is equally edible and delicious. The main difference is that mulberries grow on trees/bushes and are a lot longer and ovular, whereas, since the blackberry is a “bramble,” you’ll find it growing lower to the ground. And oh, what a glorious time-suck picking these things turned out to be on some days. 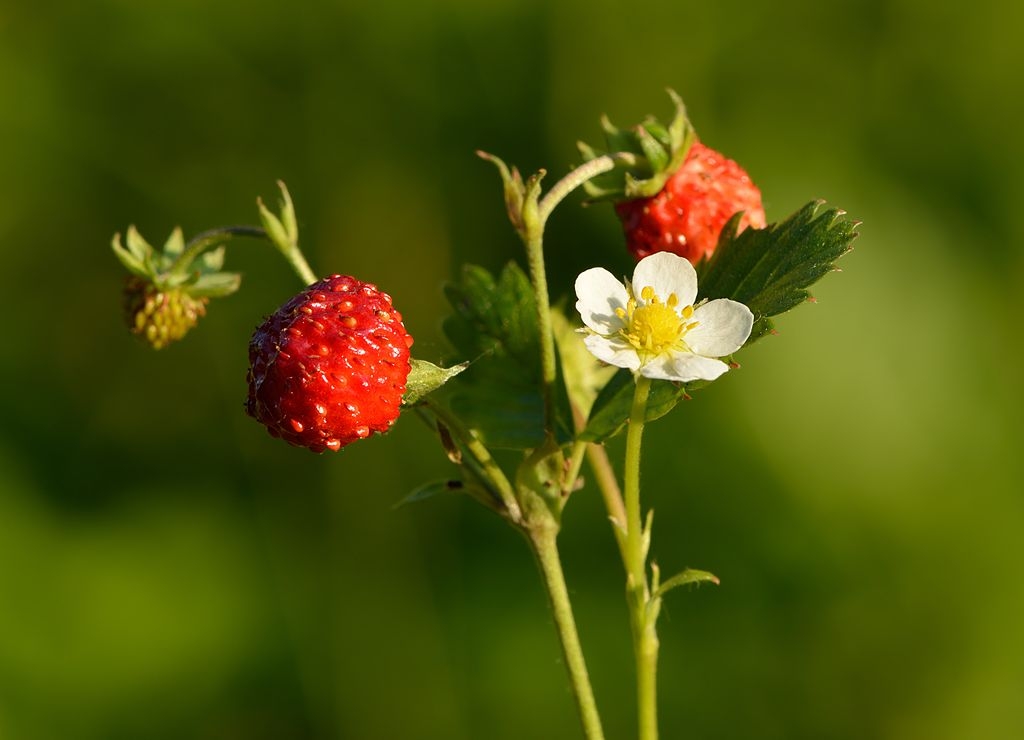 For reference, both the berry and the flower are probably less than 1″ long in this photo. Deceptive.

Season: May-July
Location: Northern Oregon-Washington
Lookalikes: None, except maybe commercial strawberries. But those are about 13x bigger

Apart from the fact that this berry shares a name with Ingmar Bergman’s best movie, they also share a fundamental trait: CRIMINALLY overlooked.

If you’re not looking for wild strawberries, you’ll probably walk right past them all the time. I know I did. One of the best ways to spot them is to notice the abundance of white flowers protruding from what looks like regular shrubby understory. This is a really good example of typical wild strawberry habitat: 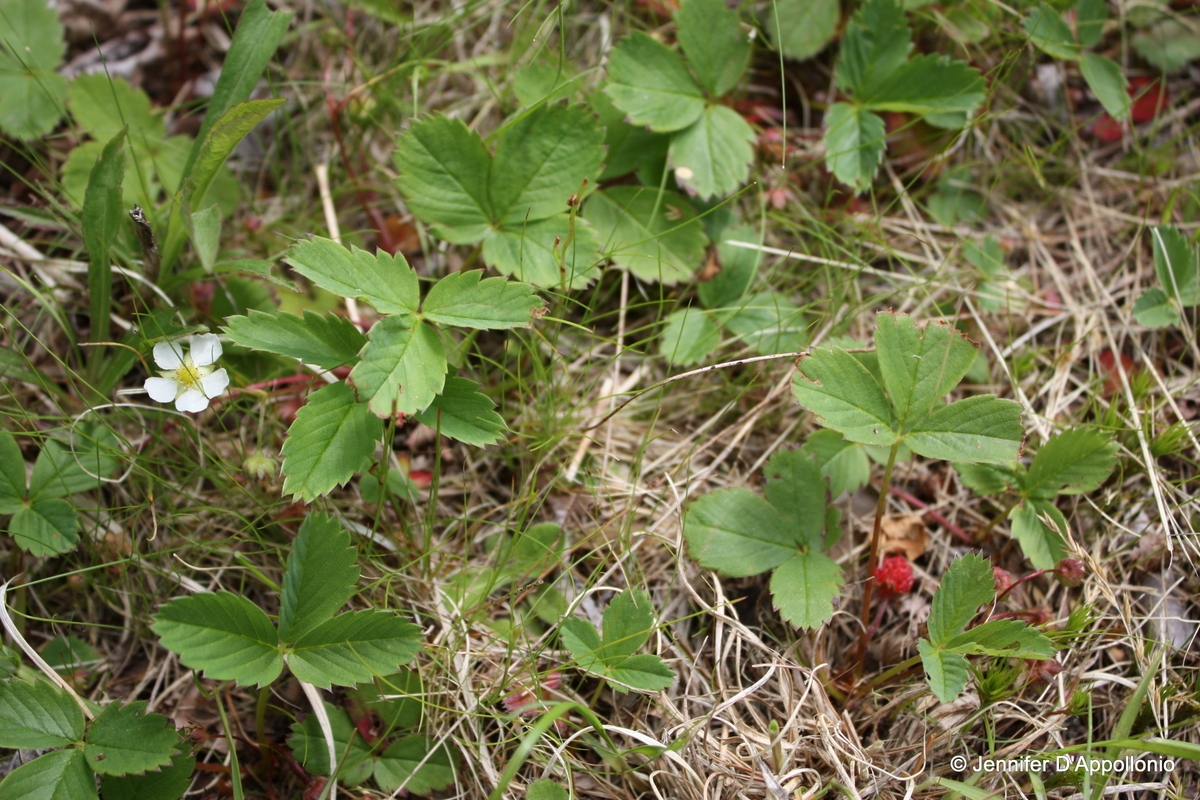 The berries are often hiding underneath the three-leaved stems.

I suppose it’s worth noting here that the wood strawberry is also particularly abundant along the PCT corridor—and it looks almost identical to the wild strawberries pictured above. They are also both perfectly edible. Oftentimes, the foliage from the strawberry plants will be so thick that you have to get down and look between them, but I swear it’s worth it, y’all. You’ll still get the miles. It’s summer, there’s plenty of daylight. The fruit is rarely larger than your pinky nail, but it’s honestly incredible how much flavor can be blasted into such a small berry. They’re like the Dorito’s nacho cheese powder of nature.

Just like when you hit a bit of trail magic, it’s always good to remember that timeless adage: “Think of the hiker behind you.” And, in the interest of leaving no trace, it’s a similarly good idea to do the same when you find edible berries on the PCT. If you hit a totally sweet jackpot of huckleberries at just the right time in the afternoon, make sure to take just a few from each plant, leaving plenty behind—not just for your pals bringing up the rear but also for your furry friends who depend on them for survival.

Especially as it gets later in the season, black bears will be out foraging berries with you, trying to stock up on calories for the winter. Don’t worry, though;  you can just leave ’em all the lowest hanging berries that probably all got peed on by rodents anyway (wink). 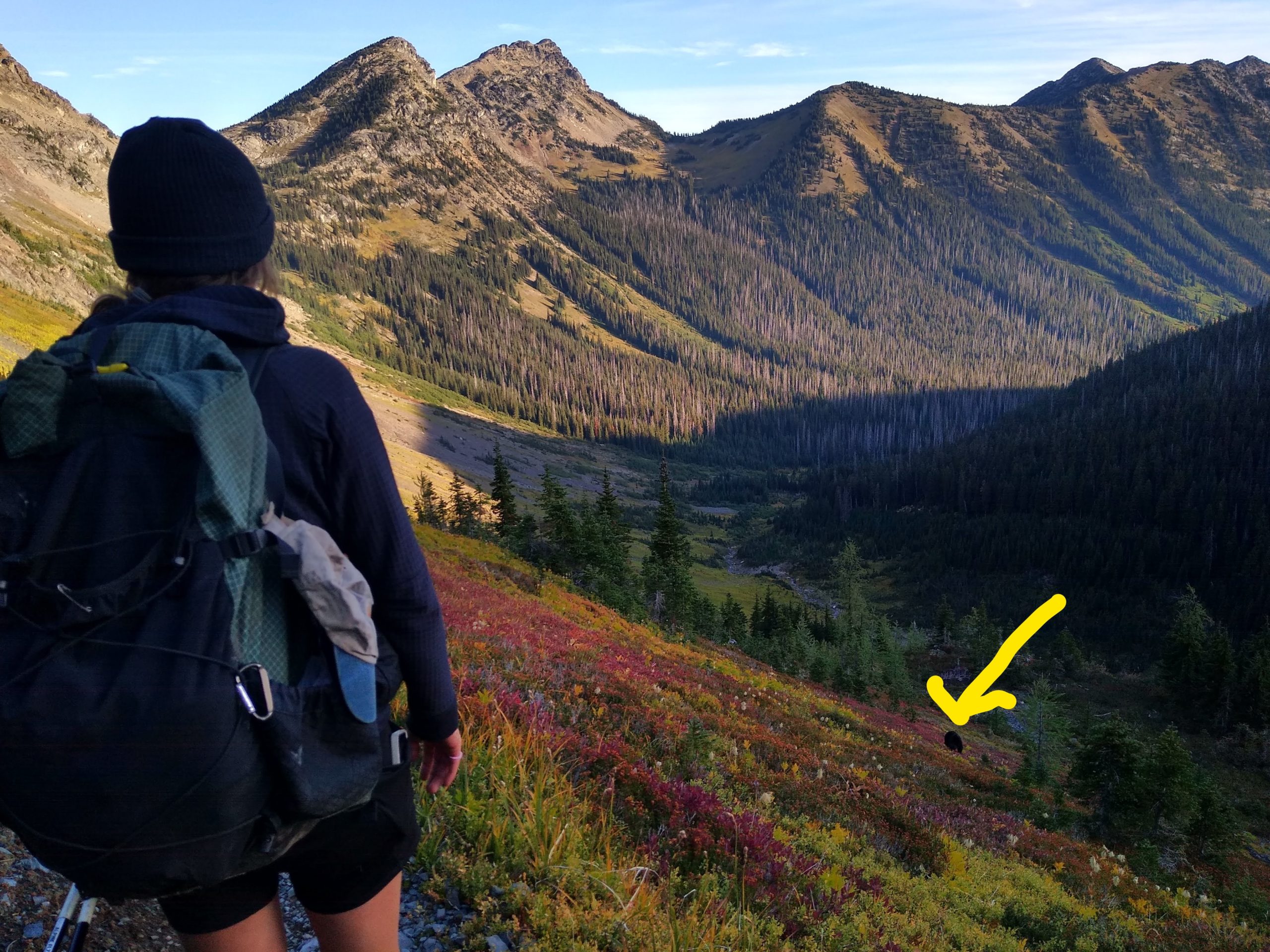