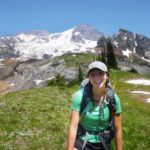 Accepting Failure on the Trail

Everyone’s story with the PCT is different. I’ve met some who knew it was something they wanted to do since 11 years old and finally got a chance to live out their dream 20 years later. Some who have crossed my path were in their late 40s and were booking it up a mountain as I trudged behind huffing and puffing. To my surprise, I’ve even met some who are thru hiking it for the second time. And I’ve met plenty who have hiked sections of it.

I became intrigued with the idea after reading “Thirst” by Heather Anderson, who holds the Fastest Known Time record of any self-supported hiker. I was awestruck. Slowly but surely I fell madly in love with the idea of thru hiking the PCT. I felt it was exactly what I needed. A transition out of a job I was unhappy in, a physical and mental challenge, a change of scenery, and a way to connect back to myself.

Somewhere along the way, I convinced my partner to join me on this journey and in May of 2022, we set off to hike the PCT. We both left jobs that didn’t serve us, moved out of the house we lived in for two years, lightened the load by selling most of our things, put our remaining belongings in storage, and shut the door on our conventional lives. After months of packing, planning and preparing, it was a physical and metaphorical transition point for us and we were beyond excited to start our 2,650 mile journey.

We set out with the goal of completing the trail in 140 days.

I’m embarrassed to admit this looking back now, but we had a very detailed spreadsheet of the schedule we wanted to follow. (Little did we know, it would turn out nothing like we planned.) We planned on working our way up to an average of 22 miles a day, starting with 15 miles. As relatively healthy and active people, this seemed reasonable despite not having ever hiked 22 mile days consecutively for almost five whole months. But who really has an opportunity to train for a 2,650 mile hike by doing a 2,650 mile hike?

When we got to the Southern Terminus, we hit the ground running, almost literally. At the end of the first day, we had clocked five additional miles than planned. The second day, the same thing happened. By the end of the first week, we were ahead of our schedule by a full day but at the cost of skipping a much needed zero day that could have prevented an injury and saved the remainder of our hike.

Early on, my partner was experiencing inflammation in his lower leg. We were crossing a road that would take us into town, but our resupply stop was still 30 miles further. We monitored it, but at the time, it was still usable so we persisted. Three days and 30 miles later the pain was unbearable and his whole foot was swollen to the point of concern. After a couple rest days in town along with a visit to the local doctor, the sinking feeling that our hike was over started to dwell on us. The injury wasn’t improving and we didn’t have the funds to maintain a hotel room for an indefinite amount of time while we waited for it to heal.

We made the difficult decision to call off our PCT plans for the remainder of the year.

Within the first 10 days of starting our first PCT attempt, we wound up right back where we started. Back in Seattle, back to work, back to reality, scrambling to put the conventional lives back together that we had so carefully broken out of only one week earlier.

I was upset, disappointed, ashamed, scared, and angry. Really more than anything, I was angry at myself that I believed I could run away from it all so easily. I wasn’t prepared to come back to this life. I’ve since learned that running away is never the answer. Because it’s hard as it is to leave a life behind, it’s even harder to come back and build a new one.

Our plan to hike the PCT was two years in the making and there we were – at the starting line, on the trail, doing the damn thing – only to be brutally reminded by some twist of fate that this was not our time. As hard as it is to accept, this is just not our year to complete the PCT and that is ok. Though short, our time on the trail taught us a lot about how well we prepared and trained, or lack thereof.

After talking to many other hikers and trail angels, I realized that this situation is more common than I thought. Everyone has their own unique experience on the trail and there is no right way to do it. But that is the beauty of it, right? Taking the leap to start a trek of this caliber takes courage, even more so to accept the fact that you don’t know what the outcome might be.

Our relationship with the PCT is far from over, with a second attempt in our future and more careful training, the journey has really just begun.

A Pacific Northwest transplant who enjoys spending her time in the woods for miles on end.