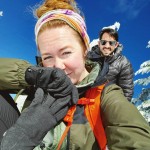 Adjusting Back Into Hiking Solo on the PCT

Reality is a weird concept.

Have you ever wondered if the experiences you go through are actually movies/books that someone else is watching/reading?

I was recently broken up with,

Left with the overwhelming sense of lost.

After breaking up we hiked together and landed in Big Bear, CA right off the PCT by week twoish. Took a zero here to organize new gear, and tie up loose strings. Physically, I did not need a zero, but the way a body handles stress is a whole other ordeal.

We stayed at Kenny’s Place, a super welcoming Trail Angel in town. Kenny picked us up, took us to his house, and catered to our needs, all while dealing with the pain of getting a tooth pulled that morning!

The next night Kitty and I stayed in a hotel down the street. We had booked it before realizing that we would make it into town a day sooner. Getting there a day early meant we made Post Office hours and could pick up our packages (New tents) without having to wait around in town for three days. After town we began the hitch back to the Onyx Summit Trailhead.

We said our goodbyes.

I use the term “we” pretty loosely…he said his goodbye while I stood and cried rather uncontrollably. Then I sat, and waited an hour or so for him to get a head start for the day.

The head start guaranteed I would not run into him on a break through the day. Once I started hiking I kept a decent pace, and decided to listen to a podcast.

On the AT I actually hated listening to podcasts, if anything it slowed me down. However, on the PCT it finally peaked my interest, and the terrain/elevation was easy enough to listen.

I started listening to the Backpacker Radio (Highly Recommend). Zach or Juliana, if you happen to be reading this you have shookith me.What I did not know is how and why, what happened next even came to be.

I listened to episode three,

I forget the title, but trail romance was the topic. A guy named Reptar proceeded to tell a story, and when I say I felt as if I was listening to a story about myself, I genuinely mean it! Reptar hiked the AT years ago and into Damascus he meets a woman, her name…HICCUPS! They hit it off and finish the AT together, so far pretty similar. They do life together for a moment and make the decision to hike the PCT as well. Three weeks into trail HE LEAVES HER!

Excuse my caps but I still to this day cannot handle the fact that my first day on trail being single again, I listen to a story that is in fact my story. Summarized as girl and boy meet, fall in love, hike, hike some more, then boy leaves. Devastated! I could do nothing else but hike and cry aggressively.

That night I stopped early for two reasons: to let him go further, and to learn how to set up my new tent. A single walled (built in rainfly ordeal) tent that used trekking poles to set up instead of regular ones. It took me two hours…but I did it.

disregarding being majorly upset I actually hiked hard. I put in big miles, and set an average of around 27 a day. Regardless of my average and burning a ridiculous amount of calories, I was not eating very much.

The lack of appetite started a little before the break up. However, I had assumed my hiker hunger would kick in soon. Once the break up happened it only proceeded to worsen. Not only lacking appetite my body now rejected food. I’d open a protein bar, barely get the package open and start gagging.

if I could make it to Kennedy Meadows South I would stay on but, the idea of hiking 600 more miles sounded so far fetched, considering the lack of consumption. I carried a majority of my food from Big Bear all the way to Wrightwood without eating it.

There were still good times and good people along the way. It was nice setting my own pace and meeting people without having the fight over a conversation as a couple I have to admit.

I ran into Godfather again and enjoyed much of my hiking time with that sarcastic human. We went through heavy water carries, hot days and random McDonald’s on trail. The days were tough and glorious.

The night before Wrightwood Kitty told us about an Airbnb that had been booked for two nights. A hiker named Gatsby made the aggressive decision to front the money and collect hikers to fill this place up. They stayed two nights, I had only stayed the second. Fifteen or more hikers in this Airbnb! This was the first real hiker huddle that I had been in on the PCT and man it was fun.

For the most part, in the back of my head I still had trouble letting go. I drank, I did my resupply, a very small resupply at that since I still had most of my food.

Candy Corn, White Rabbit, Resupply a few others and I went and got breakfast downtown. After breakfast even though I felt worse than I had ever, White Rabbit and Purple Eagle convinced me I should at least step back on trail.

This morning was tough.

I planned on just getting to trail finding a spot to take a nap and rest. Today would have been extra stressful anyways.

Around Vincent Gap there is a fire closure to Road walk around. Some were choosing to go through since it was not an active fire and had been closed for a long time. That concecpt stressed me out even more and I found myself falling into a cycle of nausea and dizziness.

not to go into the fire closure, my body relaxed. I turned on my music and danced through the road walk, with maybe a fall or two out of pure clumsiness. Trail beers were provided through the day (Thank you trail angels), and I ended the day hitch hiking the last 5 mile stretch as Godfather hitched the whole way and convinced me to hop in!

In the parking lot of three points

More beer was awaiting us. As well as a few hikers. In the small gaggle of hikers, there he was, Kitty Titty. I had enough to drink that turning around and seeing Kitty Titty standing there was less traumatic than it could have been.

To drunk to walk any further the other hikers and I cowboy camped close to the parking lot with the privy.