After This Year’s Fire Season, Is a Southbound PCT Thru-Hike Still Possible?

Let’s not beat around the (burning) bush: wildfire season in the west is starting earlier every year, and it’s lasting longer. It has become increasingly common to see hikers wearing smoke masks on trail. Some even say that including the Air Quality Index (AQI) with the weather forecast was the greatest innovation in outdoor technology since the wag bag (unverified claim).

These conditions are starting to have a tangible impact on the PCT’s traditional hiking season—especially for southbound hikers. What was already a fairly tight window for SOBO thru-hikers is going to be made even smaller by the threat of wildfires at any given time.

This year, for example, most 2021 SOBOs were immediately thrown into a trial by fire (I’m so sorry for these puns). The Delaney Creek Fire effectively closed the final 60 miles of trail between the Canadian border and Rainy Pass by early July. So, if you’d followed the conventional wisdom that an early July start date is ideal to begin a SOBO hike from Canada, then you would’ve immediately been met by wildfire smoke and the threat of imminent closures. Cara “Trail Spice” Dixon, who started a southbound hike, on July 15th, nearly got caught in the fire in Mazama Village near Hart’s Pass.

“The flames were crawling over the ridge the night we got into town to correct a couple gear malfunctions and by the time we left, they were creeping into town,” says Dixon. “We could hear it from the room we were sleeping in. By the suggestion of the owner of the Mazama Ranch House, we went to bed with everything packed up in case of an evacuation. I had nightmares about running from the flames all night.” 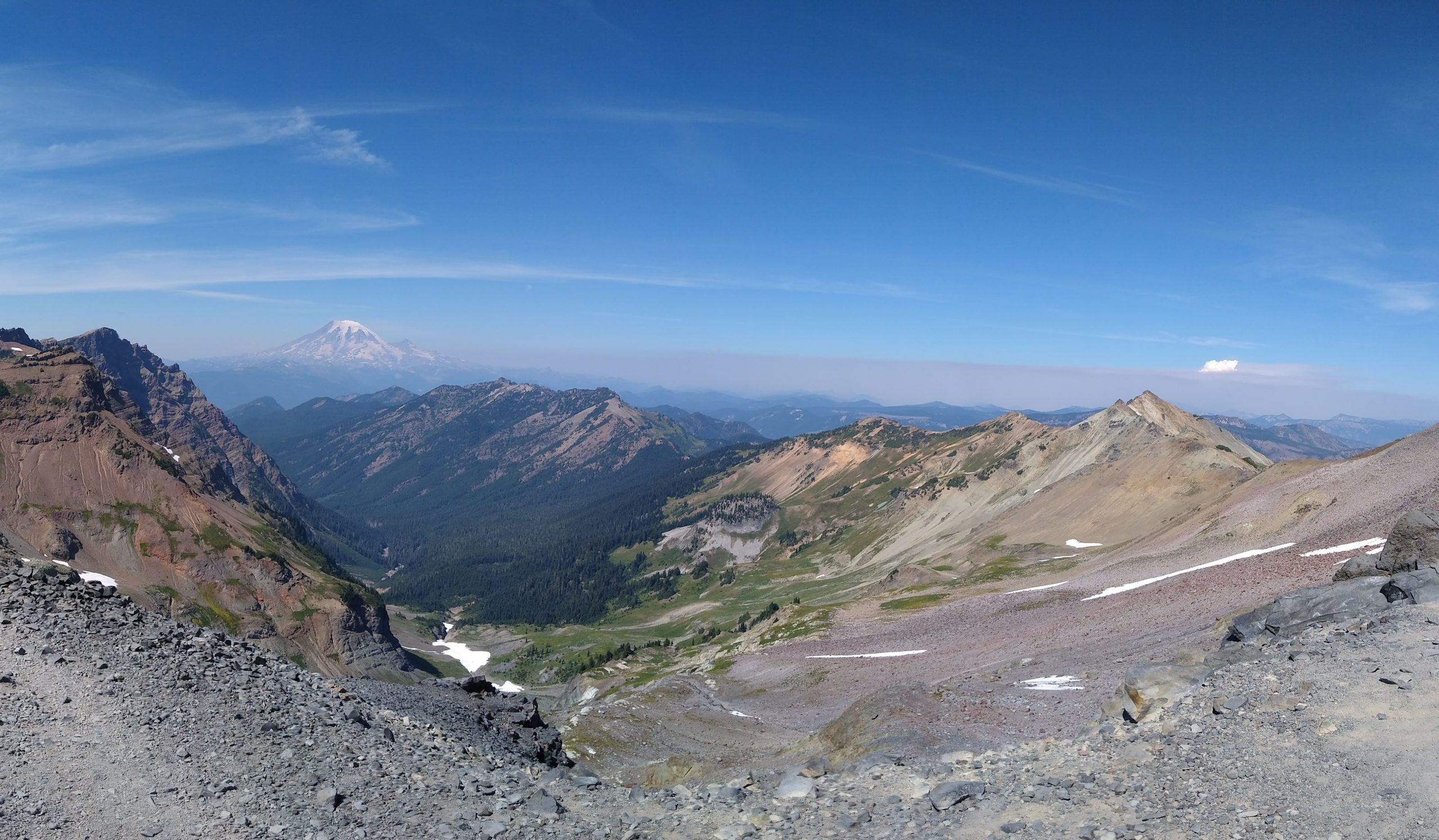 A huge afternoon smoke plume from the Schneider Springs Fire, just east of Mt. Rainier around late August 2021 in Washington.

Of course, this isn’t the first time that the trail near the border has been closed to due wildfires. It was also closed in 2015 and 2018 for similar reasons. But this year feels different. If not just for the magnitude and number of wildfires, then for the sweeping number of trail closures implemented due to them. Scott Wilkinson, director of communications and marketing at the Pacific Crest Trail Association (PCTA), hints that a tipping point may have finally been reached.

“For the 2022 season, sections of the PCT damaged by wildfire will be closed. We used to spend time trying to identify detours for these sections, but the size and intensity of megafires has increased to the point where for some of these closures there is no detour (and people will simply have to find transportation to a different part of the trail).”

In this sense, it seems that not just the future of southbound thru-hikes, but northbound as well, will look a lot different. At this point, it becomes less a question of maintaining a continuous footpath, and more a question of how to simply enjoy as much of the trail as possible. And in that regard, based on the beginning of wildfire season, a northbound hike seems much more favorable.

For example, by the second week of August this year, the Bootleg Fire in Oregon had raised the AQI along nearly all of the Oregon PCT to a dangerous level. Along with this, the PCTA had announced the closure of effectively all of the trails in Northern California, due to either active wildfires or extreme wildfire danger. That’s nearly 600 miles of the PCT that was suddenly inaccessible to all hikers, at a time when almost no southbounders would have even made it to California from Canada. And shortly after this, on September 1st, it was official that all national forests in California had been closed. 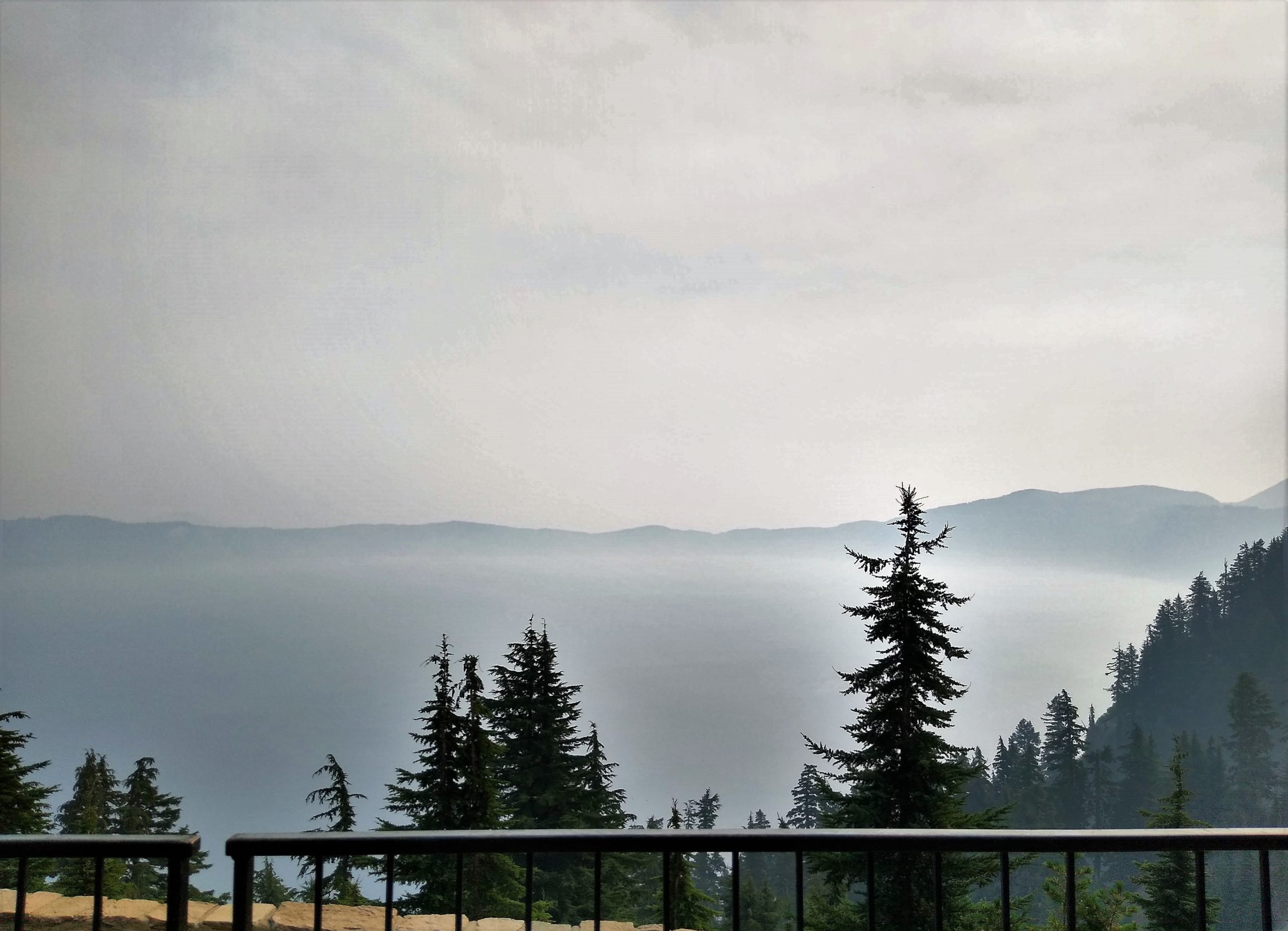 Our view of Crater Lake on a 130 AQI morning in late July (although the smoke blew out that afternoon).

If conditions like these persist in the future, then it’s impossible to imagine a southbound thru-hike being an option for most people. It is true that the increasing frequency of heat waves and low snow years open up the possibility for earlier starts from the Canadian border, but hedging one’s bets on that kind of unpredictable weather is a huge gamble.

In the early season, the possibility of powerful, icy storms with fast-melting snow and high river crossings could spell a very dangerous hike. Especially for folks who might be attempting their first thru-hike and don’t have those skills or experiences, immediately being thrown into those conditions could quickly become perilous. It’s important to remember that a lot of Washington passes through wilderness areas, where there are no roads or evacuation points in case of emergency. Some trails that lead out to roads are also currently closed due to fire activity (as of writing this), and many old bridges in Glacier Peak and the surrounding areas have collapsed in the last few years.

Ultimately, although it’s impossible to predict if or when a fire will start, there are certain things that Wilkinson agrees will not change:

“Regarding the future of PCT thru-hikes in either direction, the short answer is we don’t know. What we do know—and this message was crystal-clear in the IPCC’s August 9 report—is that the Earth’s climate will continue to warm in the future. So it’s reasonable to assume that in a broad sense, the pattern we’ve seen in the past few years will continue, and that wildfire and drought will continue to impact the West (including the PCT) in coming years.” 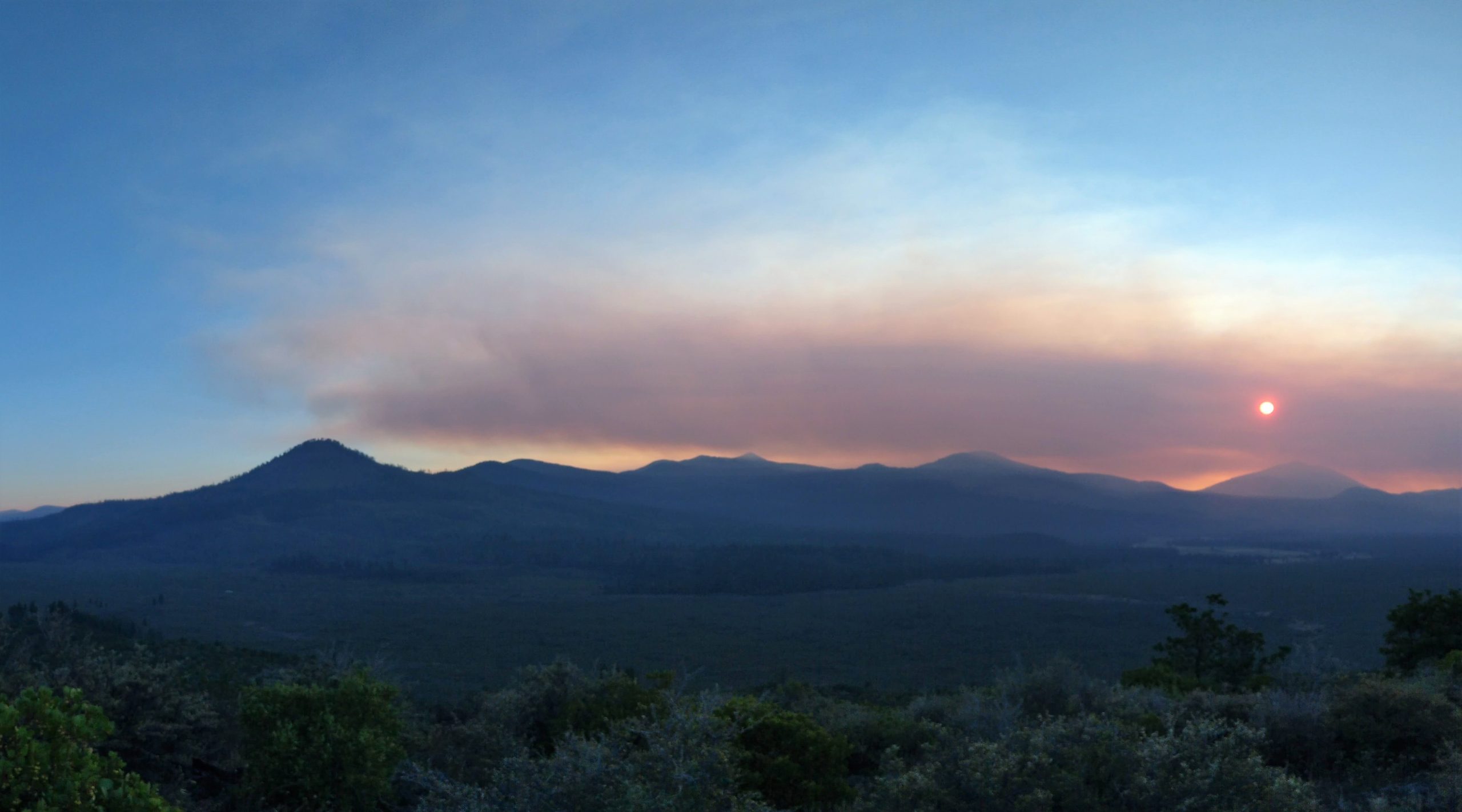 A sultry sunset on the Hat Creek Rim, after smoke blew in from the Dixie Fire.

Is it still worth risking it?

All this being said, the reasons for traveling SOBO on the PCT have always been fairly self-evident. From the relative solitude of the trail to better conditions in the Sierra and Southern California, there are plenty of folks who prefer a SOBO itinerary to the larger crowds heading NOBO and the potential snow danger of the Sierras.

The problem is that, by the time most southbounders have reached the Sierra in recent years, the smoke has already been so bad that the point becomes moot. Some 2021 hikers were spending most of their time in towns planning the logistics of how to get around closures and smoke. The Sierra was one of the only sections of trail still open on the PCT in September this year, but it was mostly symbolic. The smoke was so bad on most days that many JMT hikers (and the SOBOs who were left) opted to postpone their trips altogether.

Of course, this is something that’s impossible to predict. So for hikers who are willing to risk these things, or whose schedule only permits traveling south, then it will of course remain an option. Scott Wilkinson of the PCTA says that permit numbers for 2022 will be the same as for 2021:

Particular caution and flexibility are advised for hikers wanting to travel south. So then it really becomes more of a question of ideology. Is it too optimistic to think that next year will be better? Is it too fatalistic to think that it’s just to get worse every year?

Hope for the best and plan for the worst.

A quick consultation of the infinitely expanding list of hiking-related aphorisms reveals that it’s always wisest to “think optimistically and plan pessimistically.” Hope for the best and plan for the worst, in other words. And so it seems like the most optimistic thought for someone who wants to hike the PCT would be: “I want to hike as much of the PCT as possible.” And if that were indeed your goal, it seems like moving forward, northbound is the way to go. It is almost a certainty that there will be closures from the previous year’s fires in the future.

This year, I had to miss 110 miles due to closures from previous fires during my NOBO thru-hike. And I consider myself extremely lucky to have only missed 25 more due to active fires (I hit Belden, CA the morning that the Dixie Fire started). And so if you are a southbound hiker you can most likely plan on encountering those same closures from the previous year’s fires, but then you will also have to factor in missing a much larger number of miles due to a higher number of active fires. 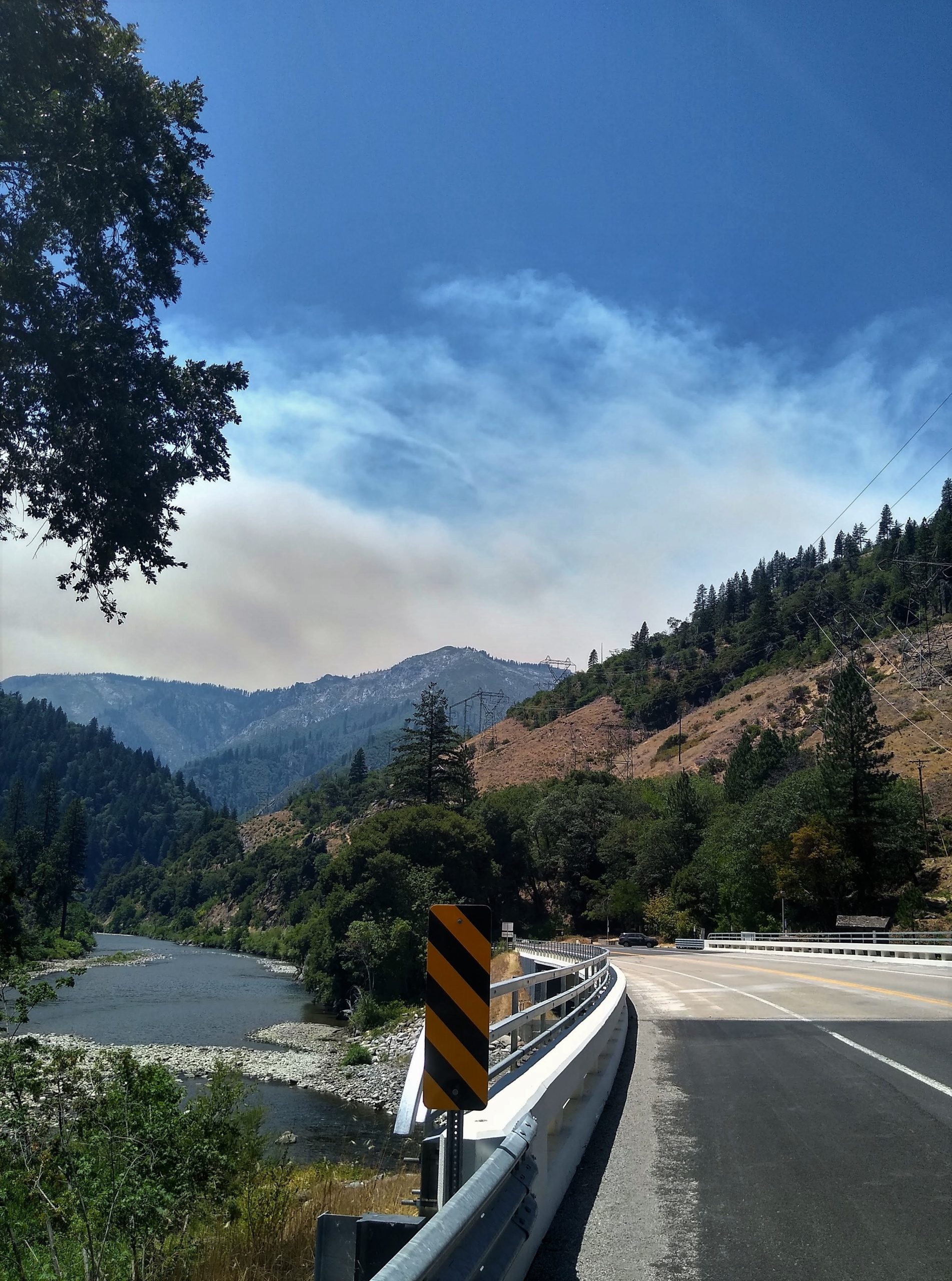 Looking down Highway 70 towards Belden, watching the smoke blow in over the ridge on the first morning of the Dixie Fire.

It’s true that lots of folks who were heading north this year also had to skip huge numbers of miles due to the Caldor, Dixie, Tamarack, and other fires; and the debate about what defines a “thru-hike” is always going to be ebbing and flowing, but the point remains that a majority of the miles that NOBOs had to skip are all miles that only became closures afterward.

At the end of the day, hiking the PCT should always be a positive experience. “When all the trail closures came into effect, the realization that my thru-hike was now a section hike of the PCT made me stubborn. I knew this couldn’t be the journey I was expecting,” says Dixon. “I started to wonder if it’s worth continuing a trail if I’m not getting the best possible experience out of it.”

Wilkinson echoes that sentiment: “It’s a great idea to hike every mile,” Wilkinson says. “But if you really want the best possible experience, you might want to rethink that.”