Allow Me to (Re)Introduce Myself

TLDR; I’m hiking because I’m sad my mom died and a medium told me to go to the woods to find myself.

Skeptical? Fair enough, I would be rolling my eyes if I were you.

Hi there. Allow me to (re)introduce myself. My name is Ellie, aka “Sparky,” I blogged for The Trek seven years ago when I hiked the Appalachian Trail  (AT) and now I’m about to embark on a southbound Pacific Crest Trail (PCT) hike starting in mid-July. 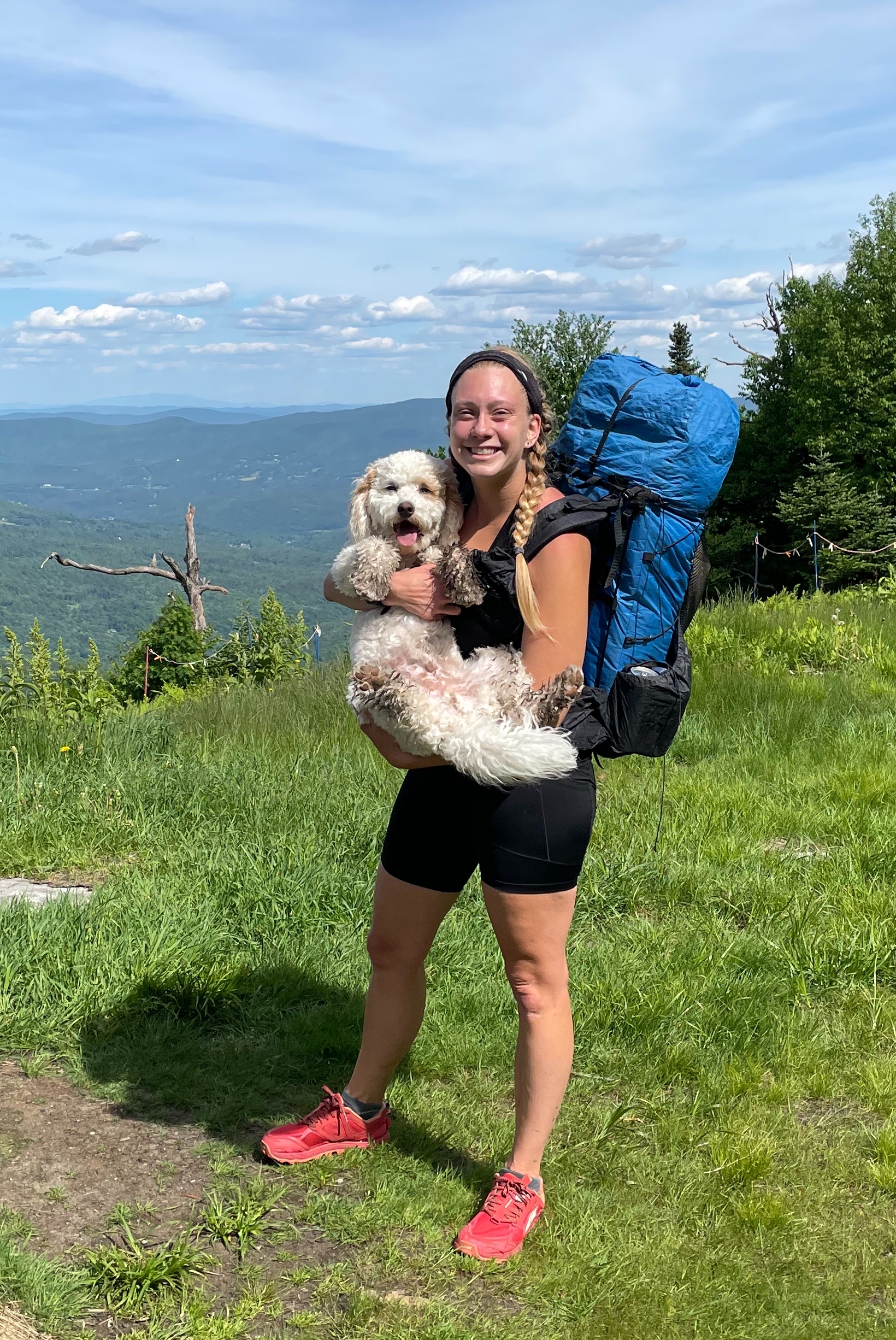 Champ and I hiking in VT last weekend.

I’ll start by getting some of the basics and hiking history out of the way. I’m 30 years old and from the great(est) state of Vermont, so naturally, my first long hike was the Long Trail. I hiked it in 2010 with my brother and it got me hooked. I went to college at Claremont McKenna College in southern California and hiked the AT the season after I graduated (2014). After the AT, I went to grad school at the University of Edinburgh in Scotland, where I was able to squeeze in some magical time on the West Highland Way and Skye Trail (2015). After grad school, I went to New Zealand and hiked Te Araroa, a 3000km trail from the northern tip of the North Island to the southern tip of the South Island (2015-2016). When I finished that trail, I moved to Washington D.C. after a short stint at home in Vermont. I have about two weeks left at my job at a non-profit that does economic development policy work on behalf of Native American Tribal Governments that I’ve been doing for the last three and a half years. During my time in D.C. I managed to get out for a few “short” week-long hikes on the Laugavegur in Iceland (2017) and the Tahoe Rim Trail in CA/NV (2018). Pre-COVID, my plan was to leave D.C. a year ago and hike the Continental Divide Trail (CDT). As with all of us, this year has come with a lot of adjustments and plan Bs.

Honestly, it’s good that the CDT fell through last summer. The trip derailment was a blessing for the way things worked out in my life, despite the cause being a global pandemic. I left D.C. last year in early August to come home for my brother’s wedding. It was an intimate ceremony in the Adirondacks, and even pre-covid the celebration was always going to be small and outside. I initially planned to come off the trail for a few days to attend, but once the trail was no longer in the cards, I planned on spending the month here at home and then going out west to live a socially distanced life on the beach for the rest of the year while my physical location didn’t matter for my job. 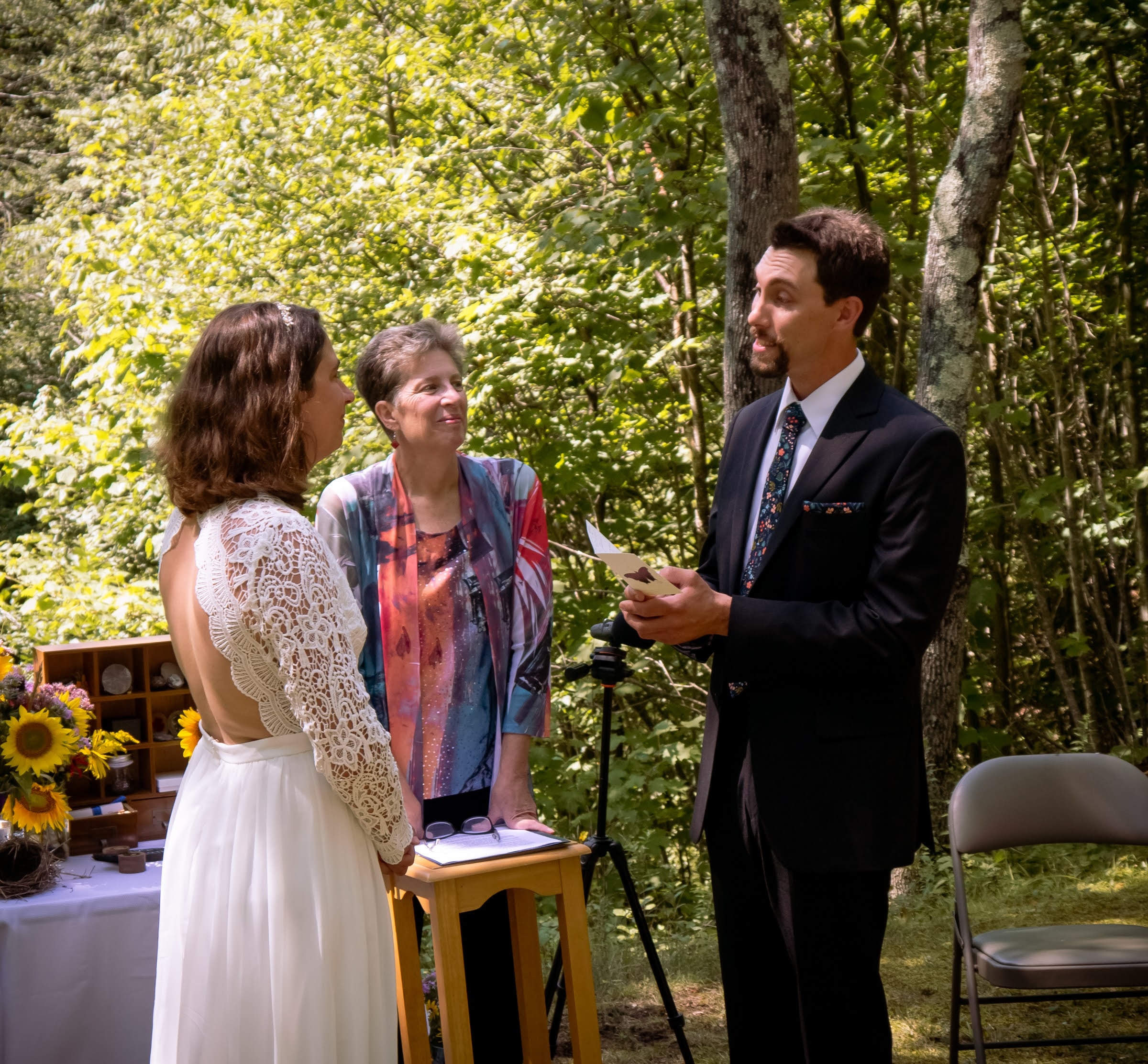 The wedding was beautiful; such a happy event in the midst of a challenging year. However, the year was about to get much more challenging for me and my family. My mom died 10 days after the wedding. I was able to be there with her and say goodbye; an opportunity that few get, and one that wouldn’t have been possible had she passed a month before or after, or if I hadn’t already been in Vermont, or if I had I been on the CDT.

It wasn’t entirely unexpected when given full knowledge of her prognosis (which I never had). Even if I had known the severity, based on how strong my mom was and how well she deflected attention I never thought it was possible that she could die. She was truly an inspirational person. She died from a complication related to cancer that she developed caused by inhalation of toxic fumes during her two deployments to Kuwait in 2004 and Iraq in 2010. If you didn’t know, and most people don’t, it’s common practice for the U.S. military to burn their hazardous waste—including batteries, medical waste, amputated body parts, plastics, ammunition, human waste, animal carcasses, rubber, chemicals, and more—using jet fuel in burn pits on the edge of their forward operating bases in the Middle East.

My mom spent a year living in the same square mile inhaling toxic fumes day in and day out. Though the effects of these fumes on human health are well documented, the VA denies benefits to most veterans who develop fatal diseases due to this exposure, because the onset is delayed and they allege that they can’t definitively prove the connection between the service and disease. Luckily for my mom (and I do mean luckily, because this is rare), she was able to get her cancer 100% connected to her service due to persistence and a great medical team. She received health coverage from the VA for all medical-related expenses incurred. She retired in March 2020 and intended to spend her retirement helping other affected veterans navigate the VA system to help them get coverage for their burn pit related health complications. 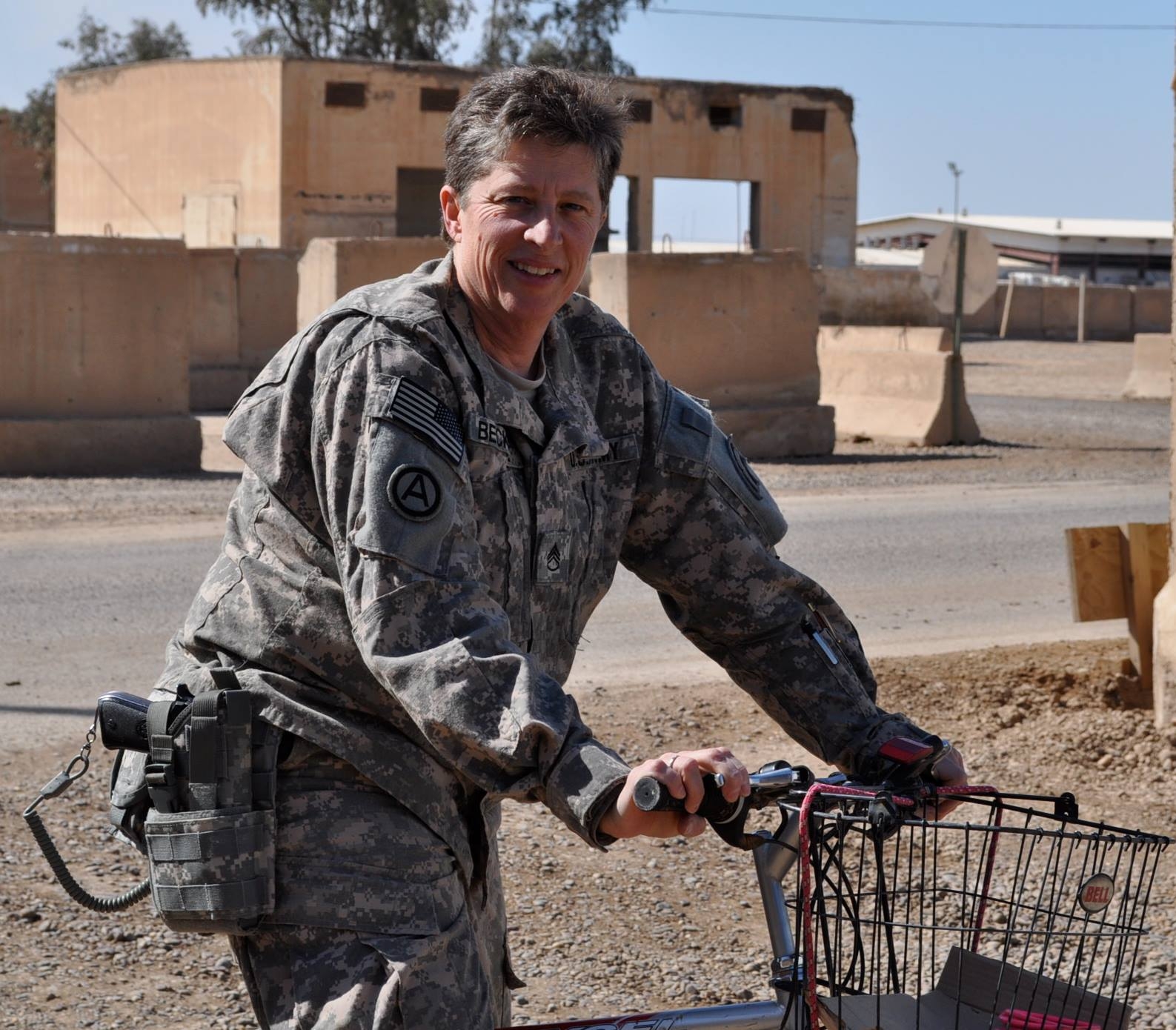 My mom died because she was brave and selfless enough to serve her country, and her own country killed her, not the forces with whom we were at war. This fate was entirely avoidable. While we always seem to have endless money for our troops, we still fail to protect their health and fail to provide their health coverage for the fatal diseases they later develop in connection to their service. I hope you’ll excuse me for getting a bit off-topic for a hiking forum, but it’s an important piece for understanding my motivation for getting out on the trail, and the anger and sadness I’m hoping to work through out there.

If you want to learn more about this issue, donate, or get involved, see burnpits360.org.

Since mom passed, I have really fallen apart. Outwardly I think people think I’m generally fine. I still have my job, an apartment, I got a puppy, I’m generally pretty capable of presenting very positively—mentally, though, I was already on a bad track and this has pushed me over an edge I didn’t know I was teetering on. To add to matters, COVID made it difficult over the winter months to see the friends and family that would have helped keep me from an emotional spiral. I’m sure over the next few months I’ll delve into this a bit more, but since you’re just meeting me that might be a bit much for post number one. 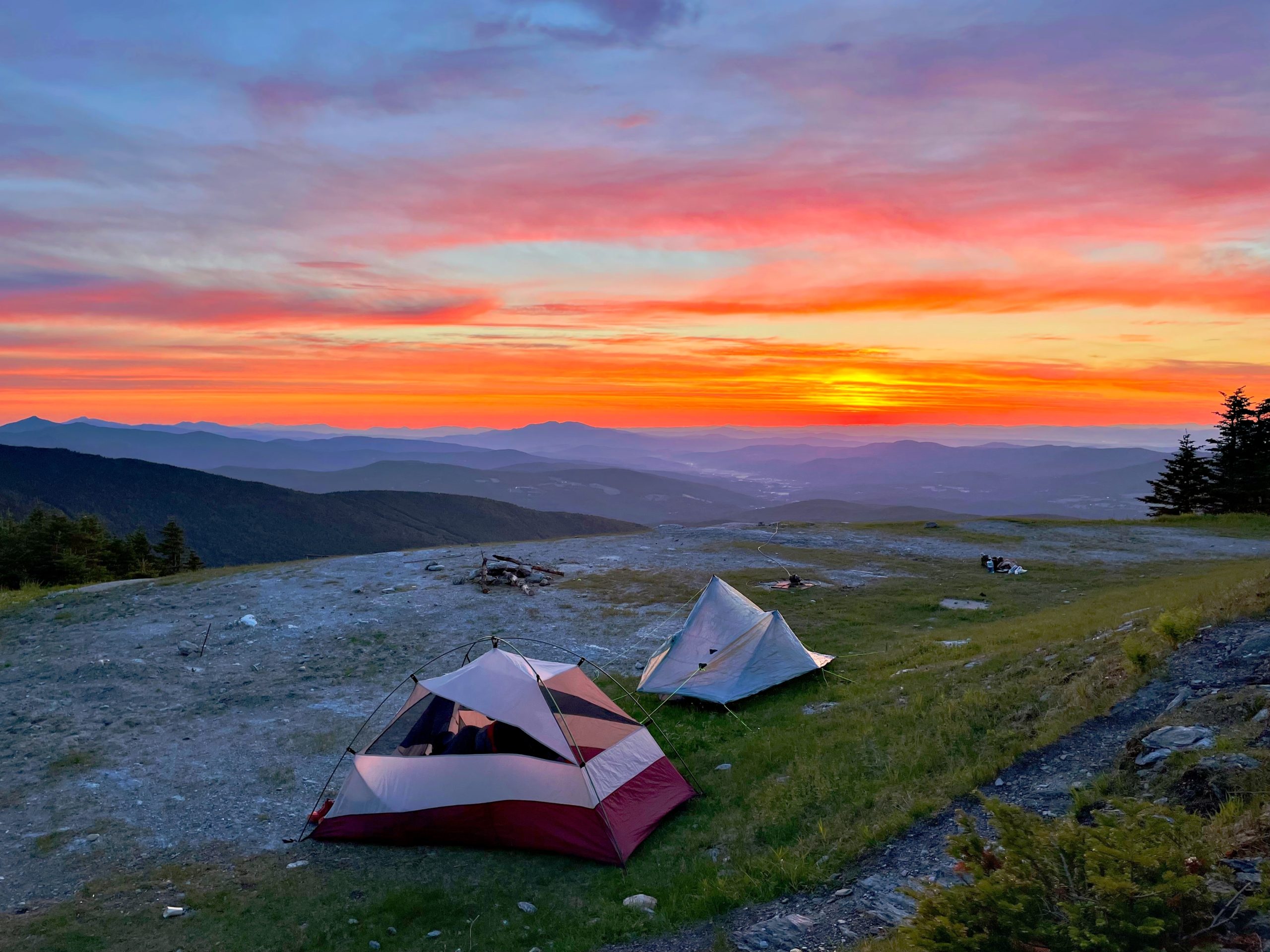 I wasn’t planning on doing a long hike this year. Back in January, when I was at my lowest emotional state, I had a conversation with a friend about a spiritual coach that she talks to and had been tremendously helpful in her life. Shortly after, I booked a session. I wasn’t looking for anything in particular, just wildly curious. I never considered myself spiritual, but such a deep loss made me open to it, and I figured a conversation couldn’t hurt but could potentially help. She immediately picked up on a strong energy encouraging me to be in the woods. She wasn’t sure if it was literal or metaphorical but after talking about my hiking history she was very insistent that a long hike would help me heal and help me find confidence and direction.

Initially, I was very resistant—I had just signed a lease on an apartment that I love and got a puppy that I would never have fathomed leaving. She asked me to consider if those were actually deal-breakers or if I was making excuses. I spent the next few months considering if a hike was feasible and if it was what I wanted to do. I was hesitant to talk about it to friends and family, thinking they would view the trip as irresponsible as I did at first. The more I considered it though the more I believed this hike would be my unique way of healing and that the opportunity may not present itself again. So, while the decision was mine to take on this trip, I would never have given myself the permission to consider it without this push from an unexpected source. After working out several logistical challenges and scoring a hard-to-get PCT southbound permit, here we are!

As I reread some of my old posts for the first time in years, they reaffirm the way I still think about my time on the trails before. Hiking was always more fun for me than anything else. I didn’t need anything emotionally from the trail and my posts at the time reflected that and were very lighthearted. I still imagine my posts will include all the silly and fun that the trail entails, but I also think there are more layers to it for me this time around.

I’m excited to be Sparky again, to take in beauty and challenge each day, to make lifelong connections, to have time to process this past year. I hope you enjoy taking this journey with me, nice to meet you! 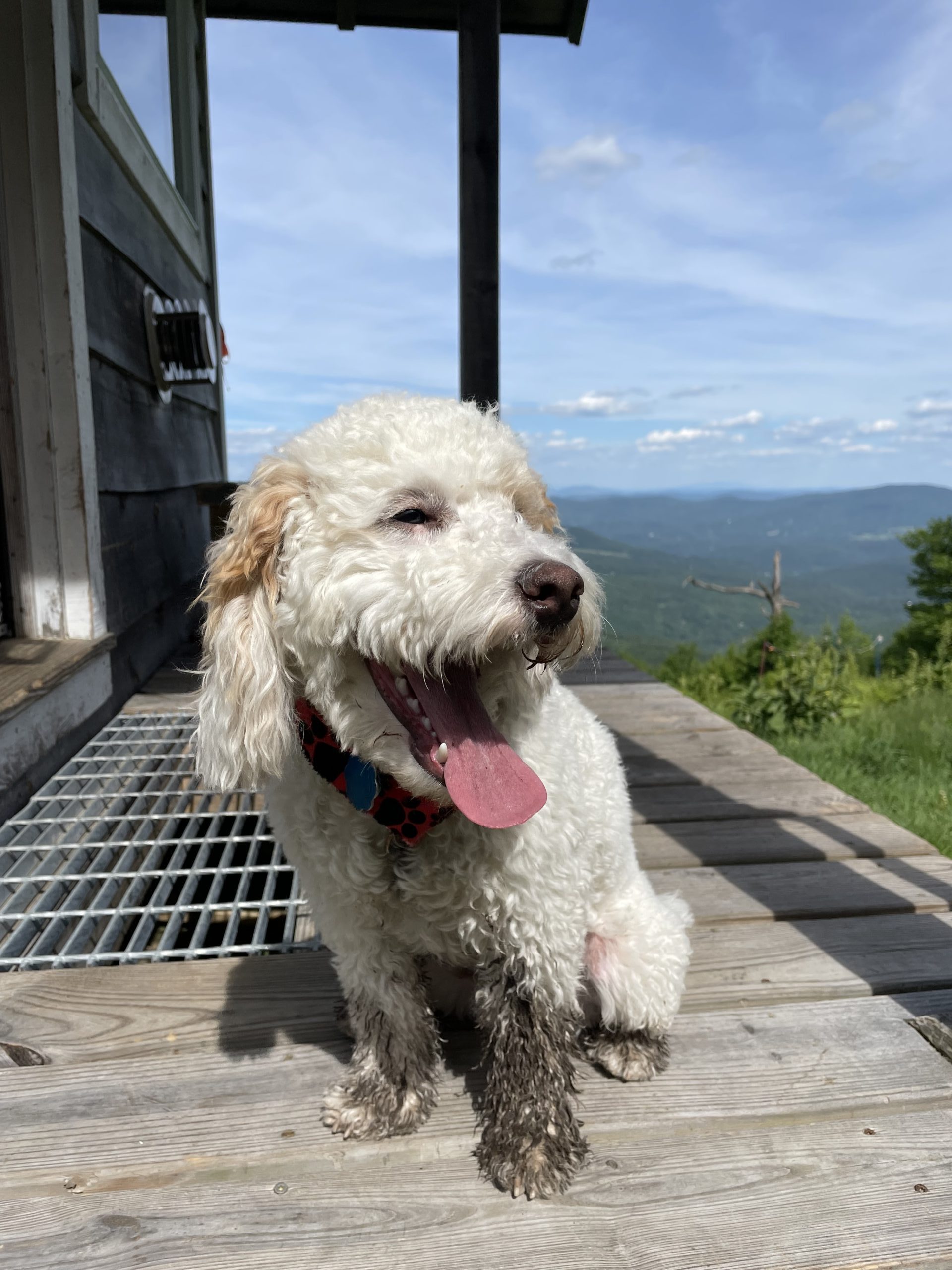 Thanks for sticking it out to the end of this post! As a reward, here’s a picture of Champ, my happy little hiker pup.