Among Angels and Cows 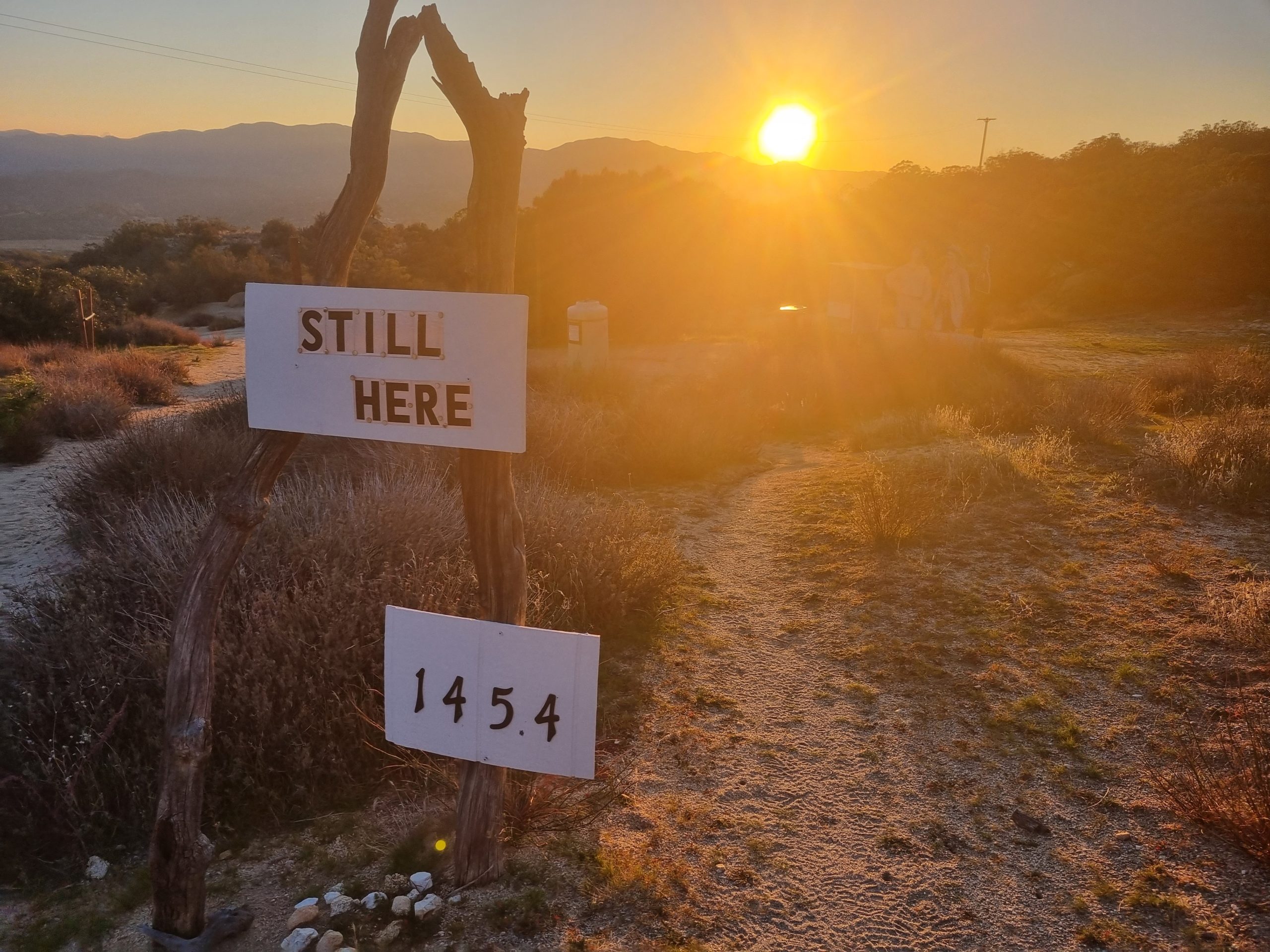 I couldn’t sleep later than 05:40 and Nine Beers slept one hour later. We prepared some breakfast in the kitchen, I ate two eggs and whole six bagels since my hiker hunger was pretty bad. It took forever to pack our resupply.

We were trying to find a place to sleep in Julian for the coming and the final section but finally decided to book a place at Ranchita in Montezuma that was apparently a good place to nero in. That would be only 50 miles away and after that it would be 100 miles to the end. Since we had time more than enough we decided to take it slow and enjoy the last days on the trail only hiking during the daylight hours.

Our wonderful host Mama Jeanina drove us to the trailhead and even to the Mt Jacinto trailhead just to see that there was indeed a lot of snow. The dog Kaya got crazy every time we got out of the car and in again since she is suffering some kind of a memory loss.

We started hiking and had a lunch break after about two minutes. Some day hikers stopped to wonder where we are going and were impressed at just about everything we said about the hike.

We walked a while and I was wondering why it felt we were going a wrong direction. In fact we were and we had already walked 0.7 miles NoBo before we realized the mistake.

By the road we found some trail magic: nuts, soda and one beer. Nine Beers got very happy by that.

The hike was short and easy and we made it to the hiker oasis before dark. Nine Beers camped right behind the carbon Muir, Thoreau and Whitman. There was even a hiker library to borrow some books and printed poems. You could also write what you have learned during the hike. I wrote only that not everybody gets hiker legs.

I had forgotten my groundsheet in Idyllwild and the amazing trail angel was going to send it to me to LA.

We drank our half a bottle of beers and ate dinner by the picnic tables watching the sun set over Aguanga town. 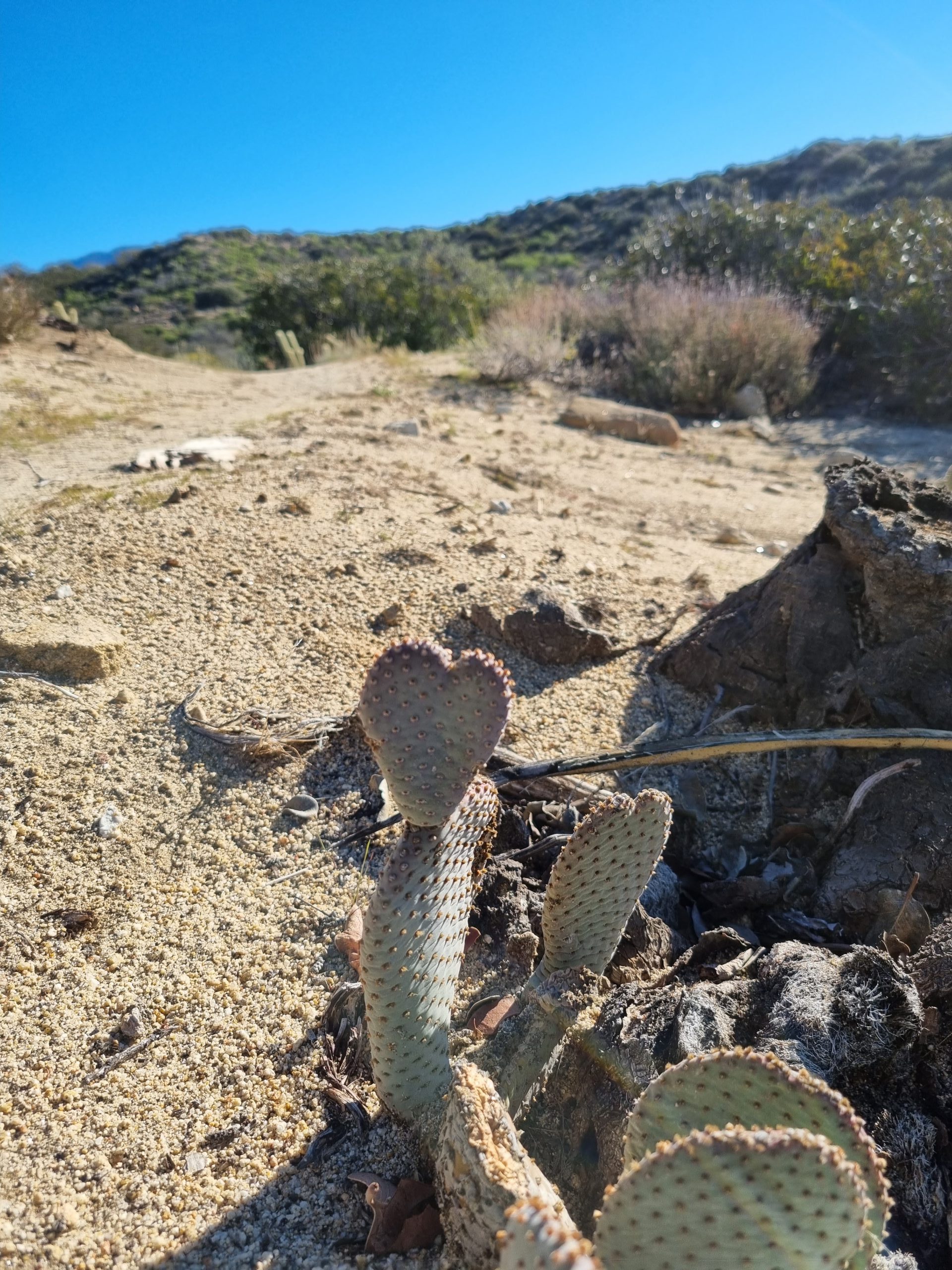 I was surprised in the morning since the tent was not frozen, neither was the quilt even damp. The night had been warmer than the nights before.

We ate breakfast at the campsite since we were going to do a short day to avoid camping high up (read: over 5000 feet) at an exposed campsite.

The trail was pretty okay the whole day, besides going through some scratchy bushes that ripped my legs bloody. There was a long water-carry that we were already used to.

We took a 20 minute nap after lunch although Nine Beers had just seen a tarantula and was afraid another one might come crawling over her.

It was very warm for a couple of hours and then it got cold again. We didn’t see any other hikers this day either.

We set our camp between some sticky bushes before the sun was down, so we were at camp longer than moving. I noticed I had lost my beanie which was not so fun as the nights were mostly cold.

The tent was frozen AGAIN on the inside as we woke up at 05:30. I had been freezing without my beanie the whole night and had strange dreams where my parents were still alive or I had forgotten to work half a year but had to pretend that I had been working.

I had a headache since I had drunk too much coffee in town again and had to double my trail coffee portion to keep up the caffeine level similar to the previous day.

We had cell service and saw that Sniff, Fish, Hoot, Barefoot, Autopilot and some others had made it to the border. Autopilot had even saved the first whiskey we bought before the trail to the end. Boy I would not have survived this trail with only one whiskey. It takes more than one whiskey or nine beers to make it with comfort.

The trail was relatively smooth and passing desert landscapes. We filled water near Mike’s place and had lunch in the middle of sticky bushes. The bushes were indeed annoyingly sticky and tearing off my clothes. At some point we saw a lot of people sitting by the trail with their helmets on and they wished us good trails. Only afterwards both of us had realized they were trail maintenance and were bummed we hadn’t thanked them. After them the trail was perfectly cleaned of the annoying bushes and the walk was smooth for once!

We met three NoBos from 2020 who were filling up the gaps now. It felt strange when they were already congratulating us for the achievement.

We filtered some water by a stream which hadn’t happened in days because there were almost no flowing streams left. I took off my socks and Nine Beers wondered: “Are you going to wash your feet?”
“Noo!” I replied. “I just have a stick in my sock.”
It was only three days earlier we had showers. Too much hiker hygiene is just too much.

We camped below 3000 feet by an open sandy area between cacti, eating dinner and drinking once again our whiskies. It was only 111 miles to the end and we were hoping not to freeze again at night.

Surprisingly there was no ice inside the tent when we woke up. It is always as exciting in the morning to see if you’ll need to dry out the tent during the day. Fortunately it is almost always sunny and dry during the afternoon hours.

We walked a nice path in leaf forests towards Walker’s Pass. We passed some cow pastures and at point there were some cows. I heard one of them more far away mooing and then starting to run towards us. I was pacing up my walk but Nine Beers was closer to the crazy cow that was running towards her. Luckily the cow was keeping a distance but the rest of the day we tried not to walk too close to the cows we passed.

We got to the famous Eagle Rock and even there were some cows with babies (I don’t know what they are called in English). It was super windy and we stopped for a short moment only.

We hiked fast and had lunch on the trail. Then we were picked up by a nice assistant working at the Montezuma retreat where we had booked one night.

The place was great, we had a warm room and showers and could wash laundry. There was self service beer and a huge room for drying marijuana. There were also tipis around the yard and cats running around. The assistant took our shopping list since she was going to a town. She even had found a beanie for me that I could have.

We had dinner with the host who had made my favourite meal, vegetarian lasagna. She offered us even some red wine, fresh salad and bread and still warm brownies. It was amazing and the house was very cozy. We slept well in our wide beds.