Be Careful What You Wish For

Continuing south from Snoqualmie Pass, I wished for cooler temperatures. Nothing much changed. There was a distant rumble of thunder, as if to acknowledge my wish, but the hot weather continued. The trail gradually became less rocky while the dirt roads and clear-cuts became more frequent. I caught my first glimpse of Mount Rainier, 35 miles southwest of me, as I passed beneath some powerlines at Stampede Pass. Also, the salmonberries and thimbleberries were slowly being outnumbered by blueberries and huckleberries. I wasn’t choosy – if it looked edible, it was fair game.

A Change in the Weather

By the time I reached the Norse Peak Wilderness, my wish was starting to come true. Overnight, clear skies became overcast, providing ideal hiking conditions the next day. Unfortunately, Mount Rainier disappeared into the clouds, and a day later, I woke to the sound of wind and rain. I spent the morning in swirling cloud, wind in my face, squinting to see more than fifty yards ahead. Mid-morning, I took a wrong turn at an unsigned junction. I dropped down from a ridgeline following a steep trail that initially looked OK but deteriorated rapidly. By the time I realized my mistake, I’d lost about 200 feet of elevation. Rather than turn back, I checked my GPS and saw that the trail reconnected with the PCT in about a mile. I tiptoed across several chutes and washouts before eventually getting back on track.

The PCT descended out of the clouds as it approached Chinook Pass, and visibility improved. The number of day-hikers gradually increased, none of them deterred by the rain. A few miles after passing the trailhead, I camped on the south shore of Dewey Lake, where the water was warm and the mosquitoes were huge. OK, “huge” is a bit of an overstatement – some of them were maybe 50% larger than normal. I only noticed the size difference because they all wanted to shelter under my rain-fly. And that gave me an idea.

If you have a double-wall tent, then you too can play mosquito baseball. All you have to do is select a mosquito that’s sitting on the outside of the inner wall. Then try and flick it.

To be honest, I didn’t give much more thought to how points are scored. I briefly considered using some combination of the following.

The reason I never came up with a proper scoring system? My games of mosquito baseball always degenerated into a home run derby. Also, I got distracted trying to think of other ways to pass my time on trail. Inspiration eventually failed me, because these are the only ideas I could come up with.

The weather was still wet and windy as I left Dewey Lake, so I reduced my mileage and camped early. It was a good decision because the wind picked up, the rain got heavier and the temperature dropped. The mosquitoes all went home, and I had to cancel my game of baseball.

The hike to White Pass was cold and windy, but at least the rain had stopped. I collected my resupply and spent about three hours at the Kracker Barrel. While my hands warmed up, I charged my devices, ate some proper food, and chatted to some of the hikers. I also caught up on news from the real world, and quickly wished that I hadn’t. The only useful thing I learned was that the Delta variant was spreading rapidly. Suddenly, spending time indoors with a group of strangers didn’t seem like such a good idea. I gathered my belongings and hit the road. 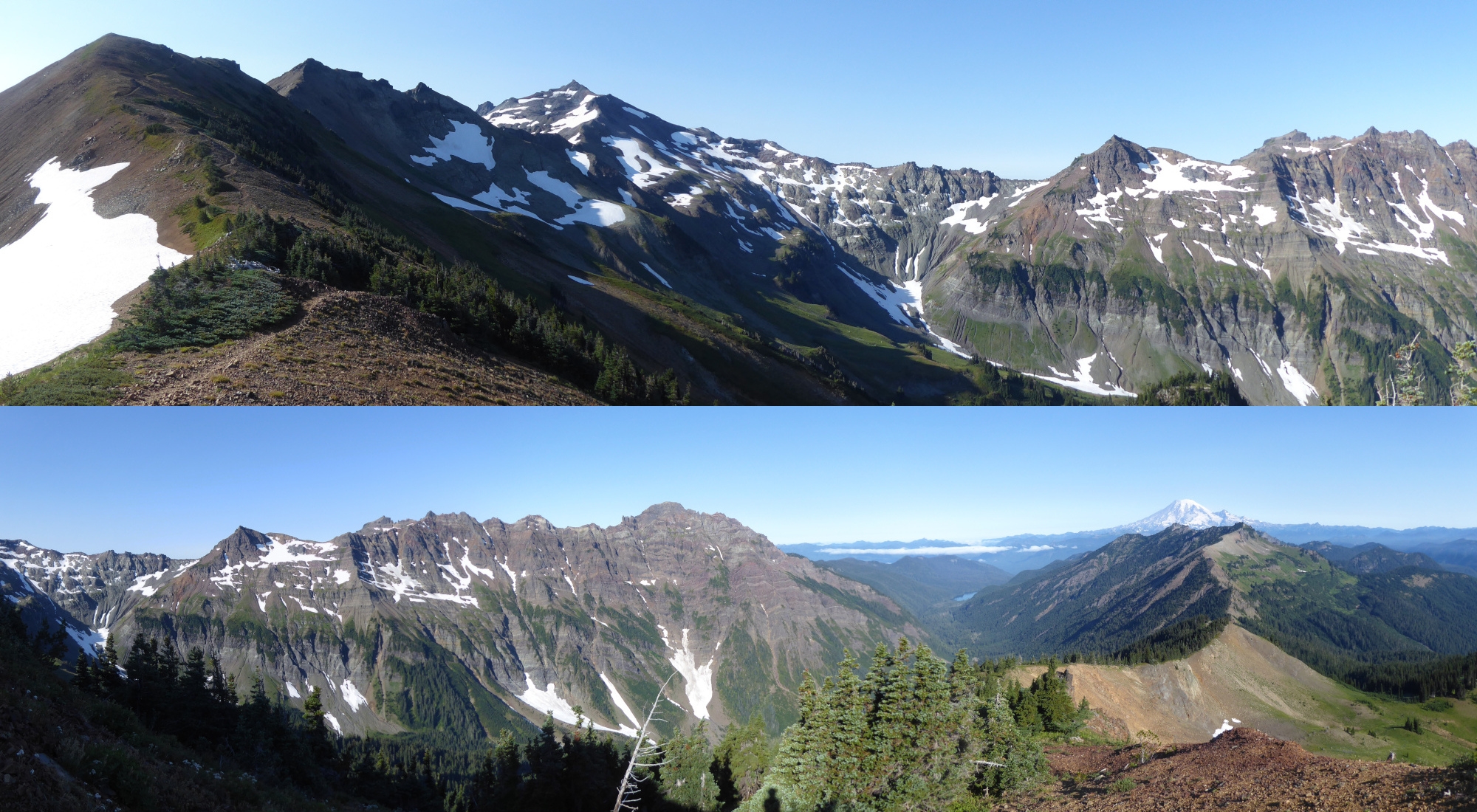 Many of the NOBOs I’d spoken to mentioned the scenery of the Goat Rocks Wilderness. Luckily, the day I hiked the Knife’s Edge, not only had the bad weather moved on but it had taken most of the wildfire smoke with it. The skies were clear, the temperature perfect and the scenery spectacular. I passed a trio of hikers who enthusiastically described the view from the summit of Old Snowy Mountain. They then told me that I had to see the view for myself. It was easy to get caught up in their excitement, so when the time came, I took the Old Snowy alternate. The climb up the final ridgeline is steep and rough, but worth the effort. Adams, Rainier, and Saint Helens were all clearly visible, between 20 and 40 miles away.

It took me a week to get from White Pass to Cascade Locks. Back when I was planning my resupplies, I decided to skip Trout Lake in order to save time. This meant carrying a large amount of food, and it turned out that I still didn’t have quite enough. My apologies if you hiked through Washington after I did. In my defense, all I can say is that I did try to leave you a few huckleberries. The night I camped at Trout Lake Creek, I shared the campsite with two other pairs of hikers. One of the couples was finishing their hike at Trout Lake, and the other couple was resupplying there the next day. They very kindly gave me their leftover food, so for my final three days in Washington, I ate like a king. 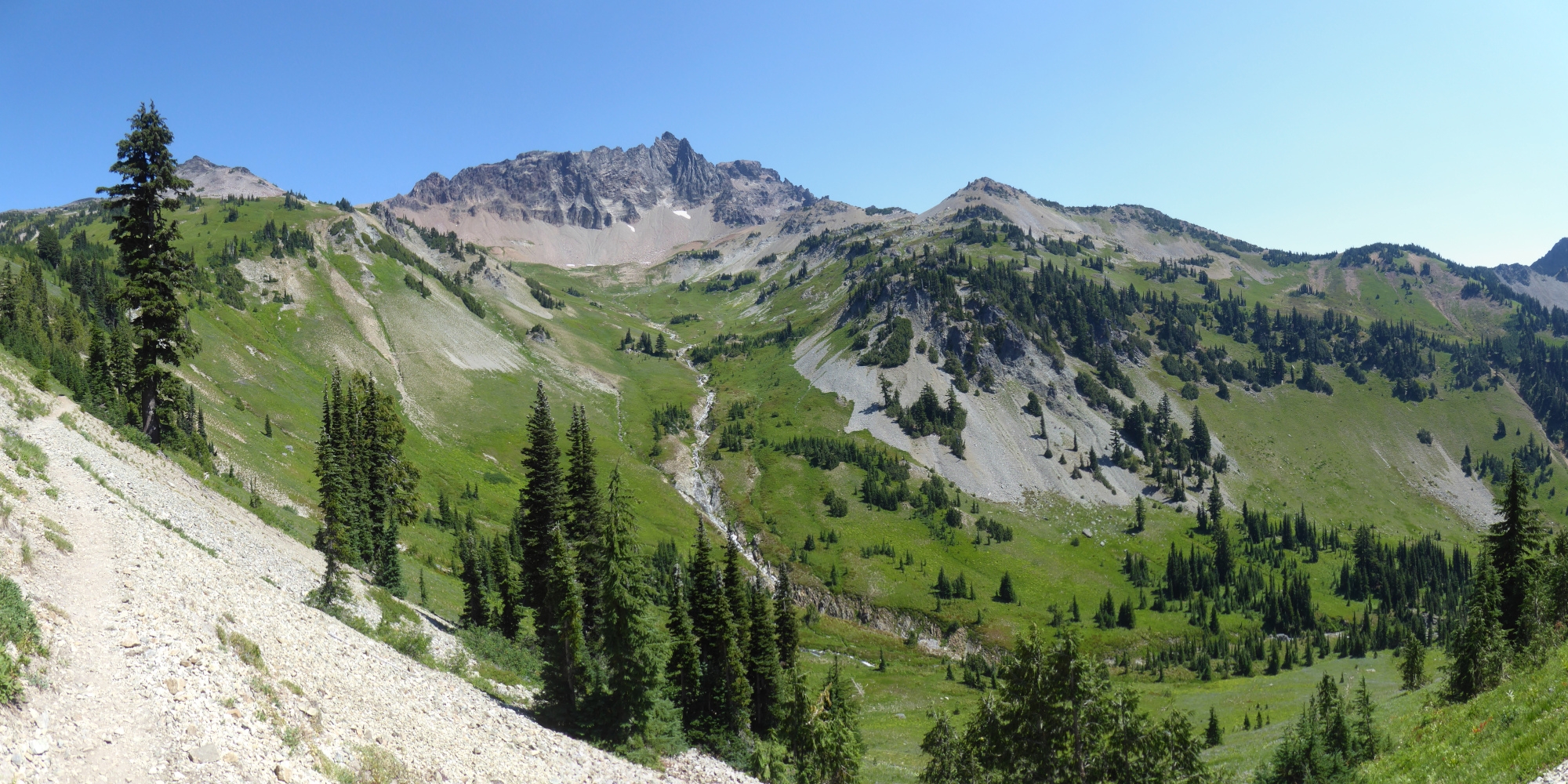 The two rainy days reminded me not to take good weather for granted. When things heated up once again, I kept my wishes to myself. Besides, this was the Evergreen State, and there were plenty of places to cool off. I doused myself in a waterfall near the Cispus River; I swam in Blue Lake. On the hottest and haziest day so far, I soaked myself in Panther Creek. My last full-mileage day before reaching the Columbia River ended with a long water carry, a decent climb, and a dry camp. I soaked my t-shirt in Rock Creek, drank as much as I could stomach, then started the 1800 foot ascent. The combination of heat, humidity, and gradient made things uncomfortable, but for some reason, enjoyable. I soon forgot about the effort, becoming completely distracted by the steady rhythm of sweat dripping off my nose.

My reward for reaching the dizzying heights of Three Corner Rock was a tiny campsite, no mosquitoes, and two bars of cell service. I wasted no time in booking two nights at the Columbia Gorge Inn, then spent the rest of the evening anticipating my first zero. As the sun sank towards the horizon, it dissolved in the smoky sky, which glowed a deep red in every direction. With just 15 miles between me and my first trail town, I felt like a kid on Christmas eve. This, I had no doubt, was going to be good.

Congrats to these 2021 PCT Thru-Hikers: Week of October 25

Useless fact: I named my left quad "brute-force" and my right quad "ignorance". Alternative fact: originally from the UK, I've lived in the USA for over twenty years. I've spent most of my trail-time in the western states of the US, but also hiked in Scotland, Canada and New Zealand. I planned on being in the PCT class of 2020, but then last year didn't go according to plan. With any luck, I'll be heading SOBO on the PCT in July 2021. --Richard-- somehikes.com