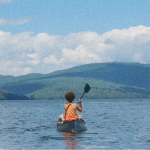 And so it Begins… My Solo PCT Trek

Deciding to Hike the PCT

While growing up I was always the girl that hated doing make-overs and playing with dolls. I spent most of my time as a young girl playing in the woods either camping or pretending like I was in the army with my friends. As I’ve grown older I have found it somewhat hard to find connections with the other girls my age because of the different interests. It wasn’t until I turned 15 that I realized that there was a whole different group that was just like me; hikers! I started hiking and immediately fell in love, I never thought that I would find something so simple and so enjoyable all at the same time. As I continued hiking, my love just grew stronger and around the time that I turned 16 I knew I was ready for a bigger challenge. I laid in my bed night after night thinking of what I could do to really challenge myself. When I stumbled along a blog about the PCT I knew that I had to do it. I read blog after blog, book and after book, and watched movie after movie. After I was sure I wanted to do it I remembered that I would have to tell my parents…

Getting my parents to let me hike the PCT might be a bigger accomplishment than actually completing the trail. After weeks of

studying the trail, its terrain, the people, and the conditions, I felt ready to pitch the idea to my parents. I sat them down and told them my idea and initially they laughed and thought was crazy to even think of that as a possibility. Honestly, when I said it out loud I thought it was crazy too. After they took some time to think about it they decided they would let me and that was only because they didn’t think that I would actually follow through with the plan. That was almost a year ago… I’m still going strong with the idea and it’s too late now for them to take back their approval. I still think that they’re hoping for a last minute drop-out. But as the hike has gotten closer they surprisingly have continuously become more and more excited for me. It did take some time but now we’re all on the same page.

Once I got my parents to agree to this absurd idea I knew that the next biggest problem would be that I would need to leave right in the middle of my junior year of high school. Don’t be mistaken, I care about my education very much and I am a high achiever in school. On that note, I’m only going to be young once, I have the rest of my life to learn calculus. I then took time to sit down with my school counselor (she also thought the idea was insane) and figured out what I would do. It took a lot of time but we managed to pull a plan together. It’s going to take a lot of work when I get back for my senior year but I mean a plan’s a plan… right?

Hi, I'm Liza! After living on the West Coast for the past 16 years I have only gotten to explore Oregon and I am ready to see what California and Washington also have to offer. I will be heading out on the Pacific Crest Trail in April of 2018 and I can't wait for you to experience it with me!