The Best Hitchhike in the History of Time

The bags that had formed under my eyes after a punishing 5-day stretch were easily large enough to haul all of my gear. Sleep deprivation and misery will do that. Little did I know that my impossibly bad mood was about saved by a magic school bus.

It was 11:30pm, approximately two hours after drifting to sleep.  I woke up to the sensation of a root poking me in the ass and a chill running down my back, a result of my sleeping pad being almost entirely deflated.  I must not have closed the valve fully, I told myself.  Even then, I knew I was in denial.  This was a gear malfunction I was all too familiar with after using a budget sleeping pad for the duration of my AT thru-hike. I re-inflated my pad—ensuring an extra-tight twist to seal the valve—and drifted back to sleep while praying for mercy from the gear gods. About two hours later, I again woke up on the cold, hard forest floor.  There was no denying it. My sleeping pad had sprung a leak.

I waited until morning to attempt a field repair, in which I miraculously located the pinhole tear. I applied the patch and packed the pad away, assuming the problem was solved. The next night I woke up on the cold ground again. It was clear I was mistaken.

The gear malfunction was bad, the timing was worse. The leak surfaced the evening before entering into Glacier Peak Wilderness, a 108-mile stretch without access to town. My options were to either backtrack a full day to Rainy Pass or press forward and deal with some truly dog shit sleep. The only thing I dislike more than a bad night’s sleep is backtracking—a fact I learned that day. 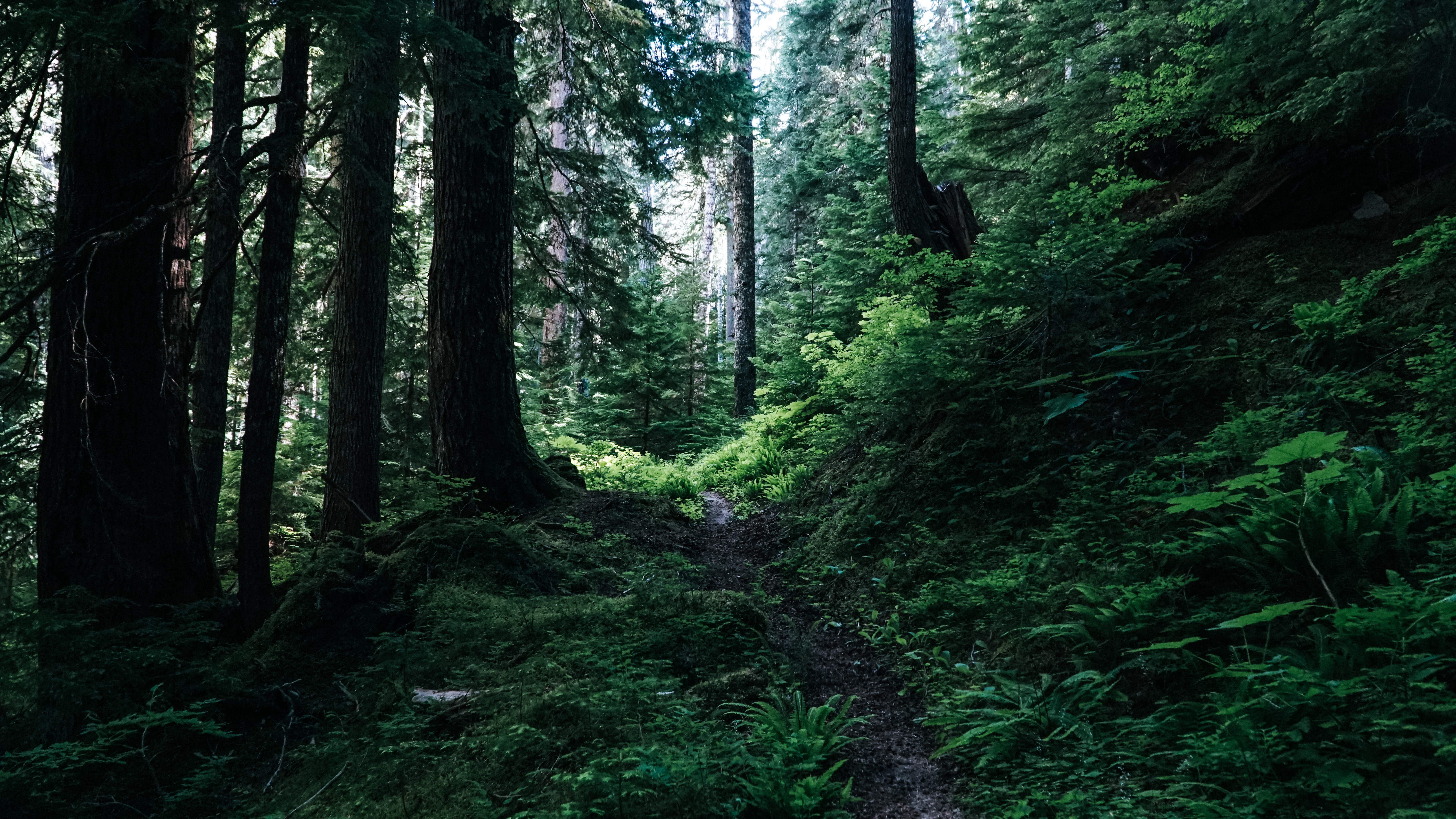 Glacier Peak Wilderness is commonly regarded as the most challenging section on the entire PCT, thus arguably the worst place to miss sleep, as adequate overnight muscle recovery is necessary to not suck at life. Each day throughout this section my mood, energy, and zest for being above the earth’s surface would set all-time lows. 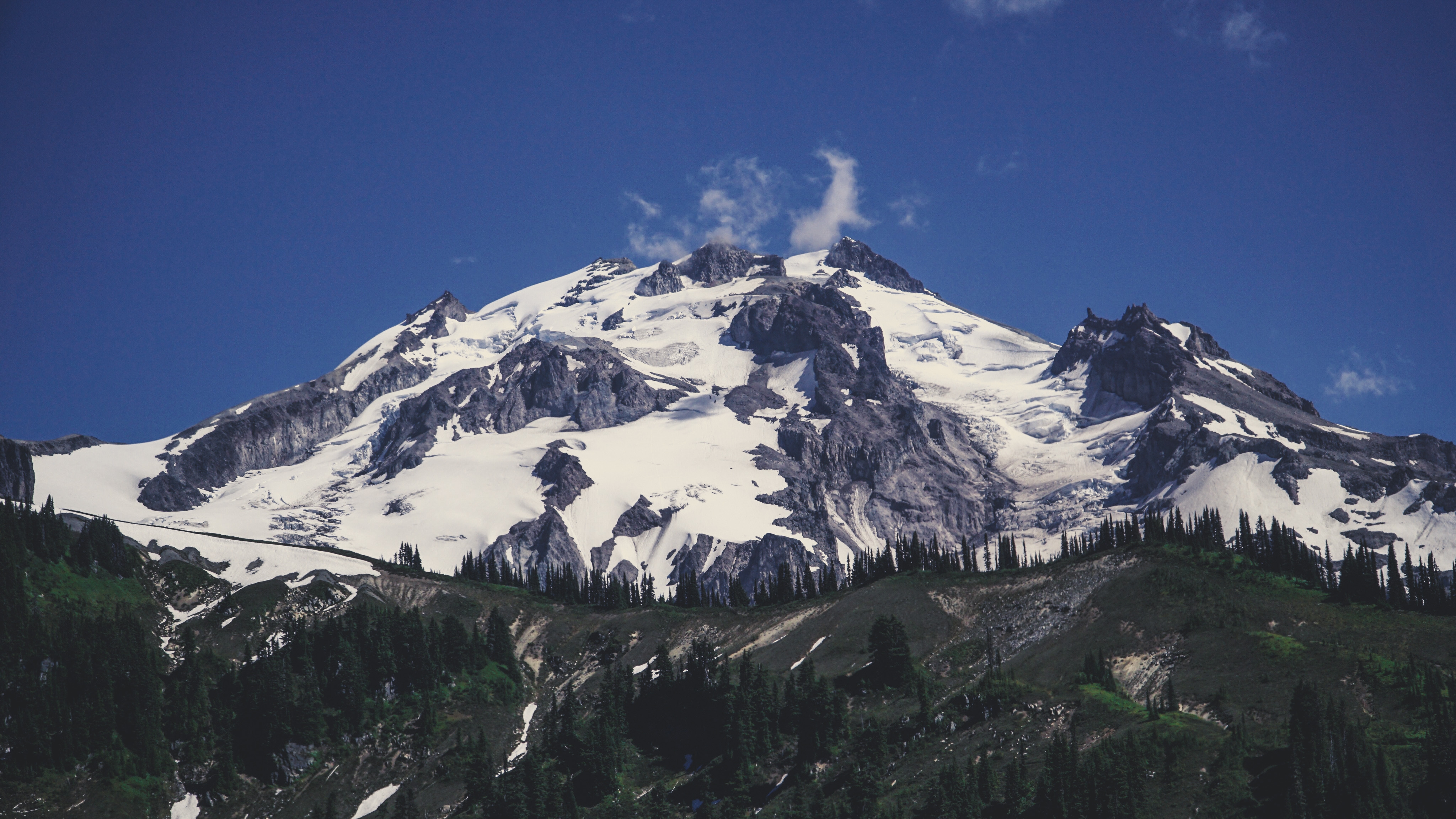 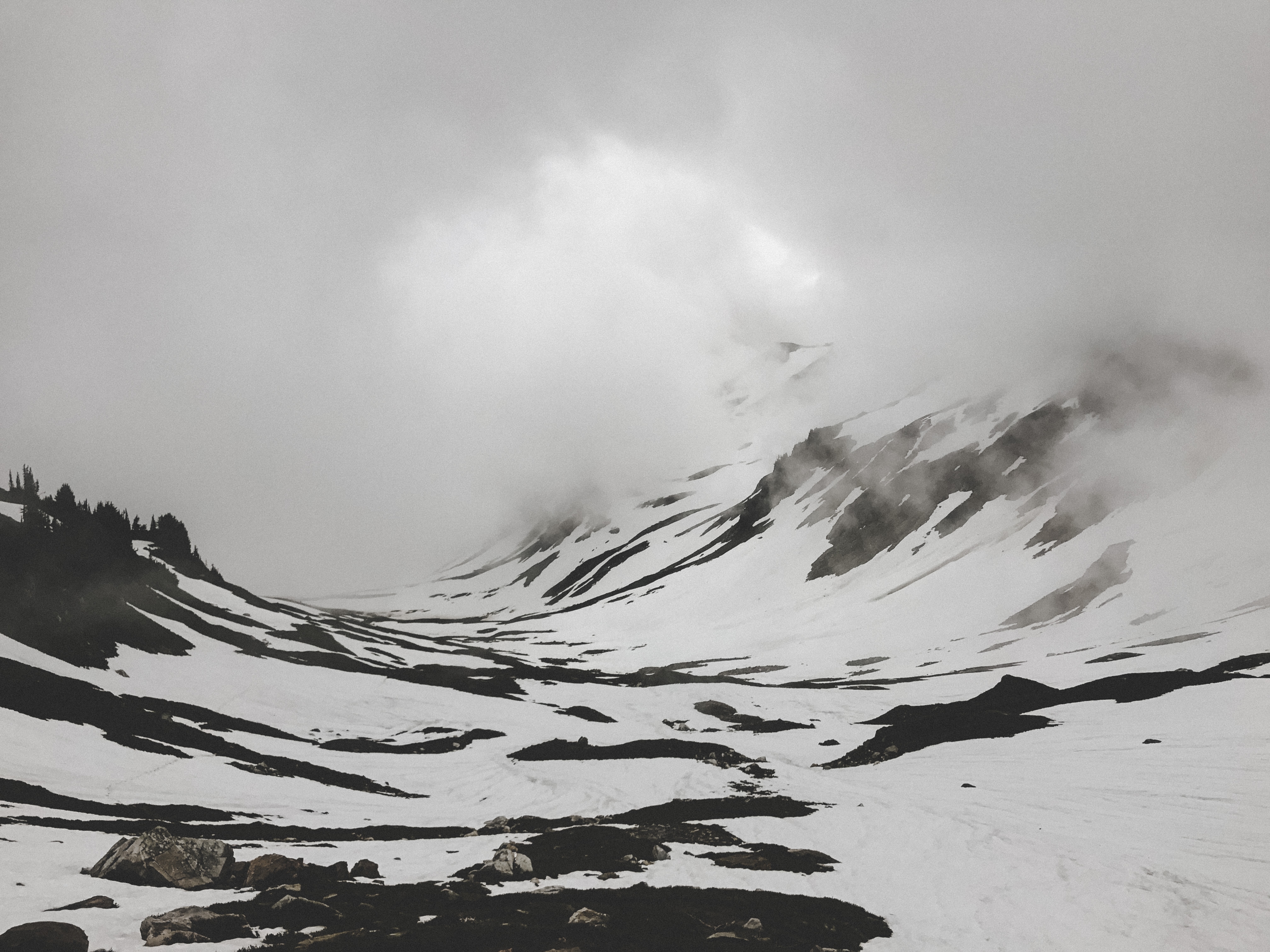 After four-and-a-half grueling—albeit gorgeous—days, we finally reached the southern end of the section at Steven’s Pass. 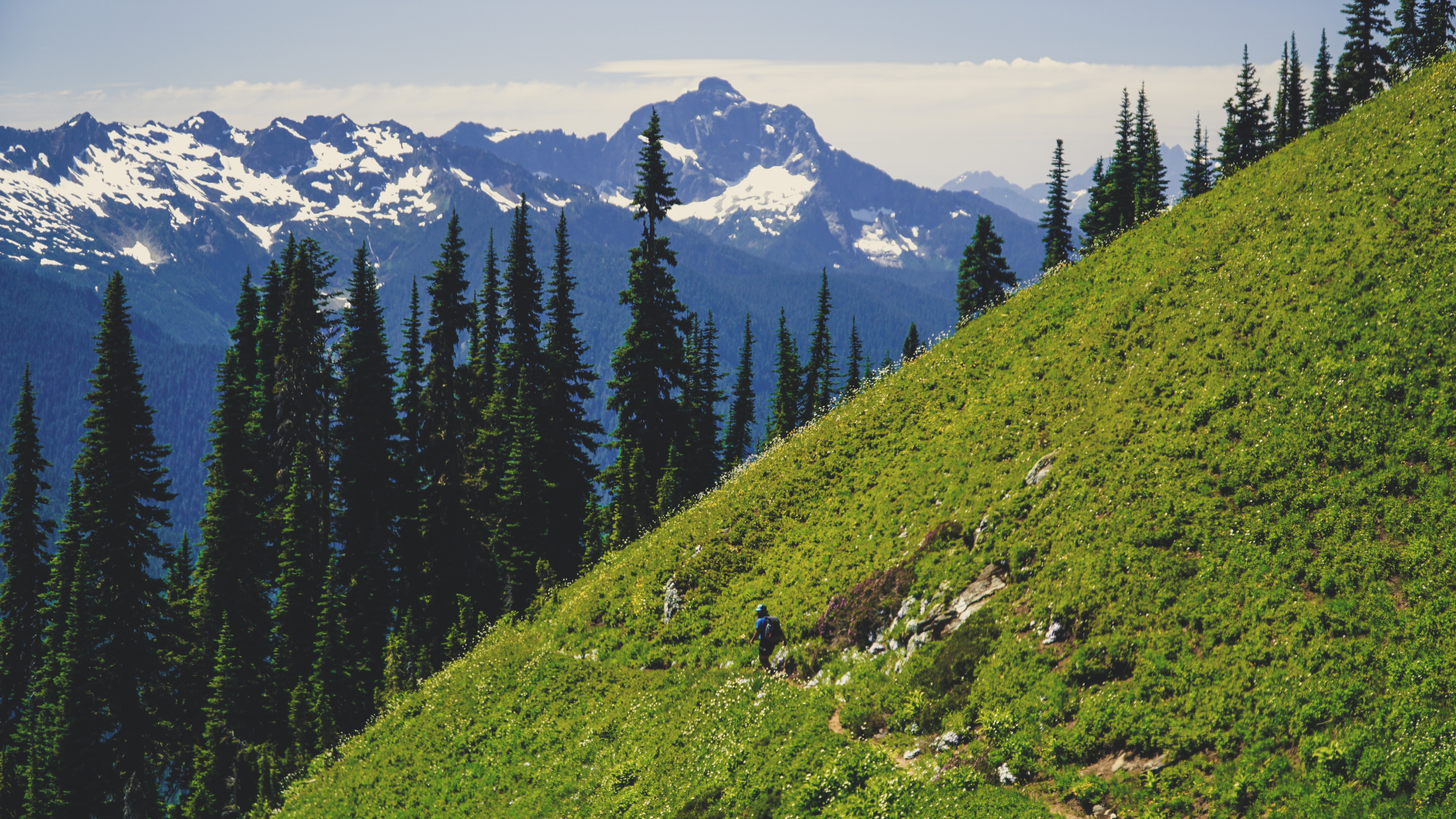 Despite feeling like hot garbage, I was also largely relieved, as a new NeoAir Xlite would be waiting for me at the resort.  Or so I thought.  After digging through their stack of hiker boxes for 15 minutes, the nice people at the front desk were unable to track down my package. They informed me that when packages don’t reach them, it’s typically because they’re being held at the Skykomish post office.  It was 2pm on a Friday, the post office would be open for another 90 minutes. “No problem, plenty of time to hitch to town,” I thought.  Again, I was wrong.

Thirty minutes pass, as do hundreds of cars. No luck. I grew increasingly anxious, but still confident overall. Another 30 minutes go by, still no hitch.  At this point my level of chill has completely bottomed out.

I called the post office to confirm that they even had my package and hopefully figure out a solution in the very-likely scenario I was unable to arrive before closing its doors for the next 2.5 days.  I called. Someone answered. I explained my situation. They asked for the name on the package. I gave it. They didn’t have it. Fire and blood came rocketing out every hole in my head.

Typically, Jabba derives great pleasure from pushing my buttons, but in this scenario, he knew better.  Instead of documenting my misery in the form of an Instagram story (his go-to), he joined in the pursuit of a solution.

We did some recon to see where in Skykomish I could buy a new sleeping pad, should we ever be able to get a ride. Google informed us that the town’s population is 198 and that we could politely go fuck ourselves.

The only other option, we learned, was an outfitter in Leavenworth, a bizarre Bavarian-styled tourist town forty minutes in the opposite direction of where we had been trying to hitch for the last hour.  We crossed the busy WA Highway 2 in hopes of thumbing down a ride going the other way.

Another hour and a half passed. Another 90-minutes of unsuccessful hitching. I accepted our inevitable fate that Steven’s Pass was our new permanent home. Defeated, I planted my sad ass on the guardrail and left the hitching duties to Jabba.

A few minutes later, a short school bus pulled into the parking lot entrance. Whistles and screams poured out the windows. This served only to momentarily raise our hopes, as they continue past us to the public bathroom. Ten minutes later, as the bus doubled back toward the highway, its doors swing open. Eagerly, Jabba asks “where are ya heading?” Without missing a beat, a lady’s voice responds, “Wherever you are. Hop in!”  We look at each other, grab our stuff, and run into this undeniably peculiar.

As we stepped onto the bus, we were greeted by a chorus of screaming women. The space was filled with coolers between seats, streamers and balloons hanging from the sides, Top 40 tunes, energy, and estrogen. We had just walked onto a bachelorette party bus.

After two and a half hours of unsuccessful hitch hiking, we had just walked onto the greatest hitch of all time.

“Take off your clothes!” yells one of the girls as we meander through the crowded aisle between 11 appropriately intoxicated women.  “Here, drink this!” Another member of the party hands me a McDonalds cup half full of warm tequila. I took a swig and passed to Jabba. He promptly chugged the rest.

In addition to sleep deprivation and physical exhaustion, an unadvisable amount of tequila and Coors were now pumping through my system on an empty stomach. The next 40 minutes were a blur of screaming, incoherent conversing, and imbibing. A streamer hung from the front of the bus read, “CHEERS, BITCHES”, a rallying cry I would continually yell, which was promptly met by screams of affirmation and more drinking.

Before I knew it, we had arrived to our destination.  A 45-minute ride went by in the blink of an eye. We had stepped onto the bus broken and defeated (at least I was).  We were now stumbling off the bus laughing and high on life and ethanol. Jabba and I passed out hugs and thank you’s to our intoxicated saviors, took the obligatory group photo, and crossed the street toward town the city center.

Yesterday we got to Steven’s Pass and after almost 3 hours of unsuccessful hitching…we finally got our ride. It just so happened to be a short bus bachelorette party booze cruise into Leavenworth, Washington. I couldn’t make it up if I tried. Great success!! Photos of last stretch to come…

As it turned out, we had been dropped off across the street from the outfitter, the sole purpose of our hitch, a stress which had escaped me during the previous 45 minutes. I entered and bought their last Therm-a-rest Zlite pad. At this point, it was late and we were drunk, a bad combination for getting back on trail.  We got the last room at the cheapest motel in town, and ended our night with Bavarian sausages, giant steins, and ice cream with The Director and Moose, a pair of SOBO buddies who had also ventured into town.

Thru-hiking is a roller coaster of emotions (a subject I’ve written about at great length before). This was perhaps the biggest contrast I had ever experienced in a few hour span. At 3pm I had achieved peak frustration and fatigue, an unfortunate combination. By 7pm, we had walked off a borderline movie script hitch, solved a gear issue which had been draining my quality of life for days, were sprawled out in king-sized beds, full of pork and German lagers, and rehearsing the day’s events to confirm we hadn’t dreamt the entire thing.

Thru-hiking has taught me many lessons, and this day’s lecture was a refresher course: The Trail Provides.