Bites, Stings, And Other Things

In general, I prefer dry-camping to sleeping near a water source. Carrying extra water is a small price to pay for the chance of a campsite with a long-range view and fewer mosquitoes. However, sometimes it’s just more convenient to stop at a lake or creek that’s near my target mileage. And that’s what happened every day between Kennedy Meadows North and South Lake Tahoe. The nights were warm and there was never much of a breeze, so I just had to put up with the mosquitoes.

The night before going into South Lake Tahoe, I camped at Showers Lake. As the sun went down, the mosquitoes really stepped-up their game. I sat on my bear canister, cooking dinner, watching each annoying little creature land on my legs. They’d wander around, probing, looking for a way to get down to my skin. I have hairy legs: a useful first and last line of defense given that I didn’t have insect repellant. (Also, it was warm enough that I didn’t want to wear my rain-gear.)

My defenses held, mostly. I also did a lot of swatting, swearing, and scratching. The next morning, as usual, I was pursued by a cloud of ravenous little blood-suckers. A mile or two before arriving at the highway, I realized they’d found a weakness and were exploiting it. A line of itchy bites was accumulating behind each of my knees, where my legs aren’t quite as hairy. They’d found my Achilles heel.

It was a relief to discover that South Lake Tahoe was a skeeter-free zone. I arrived mid-morning, which gave me plenty of time to enjoy the amenities of the real world. After visiting the deli counter at Safeway, and eating a little too much, I walked back across town. As I passed the Cold Water Brewery, I decided I might just have enough space for a beer.

Three beers later, I continued, slightly unsteadily, along Lake Tahoe Boulevard. Fortunately, my to-do list wasn’t long: resupply, check-in, laundry, dinner. That evening, as I sat outside Artemis Mediterranean Grill, the power went out along the boulevard. And it stayed out for several hours. The electronic lock to my motel room still worked though, and I camped in comfort in the dark.

I took an Uber back to the trail the next day, curious to see if the bear situation was as bad as I expected. Four days earlier, the US Forest Service had started requiring anyone camping in the Desolation Wilderness to use a bear canister. There’d been several incidents where bears had stolen food, and I wondered if PCT hikers were to blame.

During my time on the PCT, I only saw one food-hang that looked like it would work. The other food-hang I saw definitely wouldn’t have worked, although to be fair, that one belonged to a USFS trail crew. I did see a trail crew using bear canisters in an area that didn’t require them, but only one hiker I spoke to mentioned that she routinely used one. Most hikers I met at Kennedy Meadows North had rented a bear canister for the Sierra Nevada, and were hastily trying to extend their rental to include the Desolation Wilderness. I don’t think it’s a giant leap to conclude that the only time most hikers store their food securely is when the regulations require bear canisters.

I think more people would voluntarily use a bear canister if they thought about it slightly differently. Obviously, if a bear can’t get their food, it’s less likely to harass some future hiker. They might be that future hiker. Instead of telling people that “A fed bear is a dead bear,” I’d simply ask them to “Pay it forward.”

Farout’s Echo Lake waypoint comments beginning in early July painted a picture in which the Desolation Wilderness bears were running amok. I half expected to be mugged by one of the marauding animals as I passed Lake Aloha. However, things were quiet. (My only bear sighting in northern California would be four days later. The animal was a juvenile, almost completely blonde, and it sprinted away as soon as it saw me.)

A short walk from my campsite led to a view of Dicks Lake.

After enjoying a bear/mosquito-free campsite below Dicks Pass, I hit the trail just after sunrise. A few minutes later, I passed a pair of NOBO’s camping nearby. While we chatted, one of them (trail name: Nope!) realized that he and I had met before. He was right. I’d passed him going south on the PCT during a weird day in Oregon, in 2021.

After Dicks Pass, I met several more hikers, and there were rumors of trail magic up ahead. I didn’t dare believe them, but then I met Hobbes. He confirmed that the trail magic would be provided by one of Sign-Tap’s friends. (I’d been leapfrogging Hobbes and Sign-Tap for ten days at this point.) The trail magic was even announced in a Farout comment, which is legally-binding in California, I believe.

I next saw Hobbes waiting with two other hikers as I crossed Bear Lake Road. There was no trail magic, and all three were looking slightly disillusioned. (Pun very-much intended.) I kept moving. Two miles later, I arrived at the Barker Pass Trailhead, which was the actual location of the trail magic. The trail angels were in the process of packing-up, but they left me and a handful of other hikers with some food.

I sat down at the nearby picnic table to eat my watermelon and cookies. During the approximately ten minutes it took to finish them, there was an influx of hikers. Someone had updated the Farout comments with the correct time and location, but the wave of hikers arrived too late. And they knew it. I’d never seen so many dirty, downcast faces in my life. I gave them my commiserations between mouthfuls of food, which admittedly didn’t help. However, fortunes were about to change.

It was at that moment that Trail Angel v2.0 arrived, and his name was Graham. He quietly set about unloading coolers, bags, and boxes from his car. There were chilled cans of soda, domestic beer, craft beer, potato chips and dried-meat snacks. On the filthy faces of everyone around the table, looks of disappointment were replaced by disbelief and then delight. They’d just experienced a short, steep section of the PCT’s emotional rollercoaster.

As a steady stream of hikers came and went, I stayed and chatted for about four hours. I was enjoying myself, and the campsite I was aiming for was only about a mile away. Besides, any distance I didn’t cover today was simply a problem for the me of tomorrow. (And that guy’s the worst: he’s always complaining that I didn’t go far enough or leave him enough food.) Eventually though, my time was up. I hiked to the next water source, filtered water, backtracked a short distance, and camped at an overlook with a view of Lake Tahoe.

The wind changed direction during the night, bringing with it plenty of smoke from a large wildfire. The Oak Fire, I found out later. It had started two days earlier in Yosemite National Park. 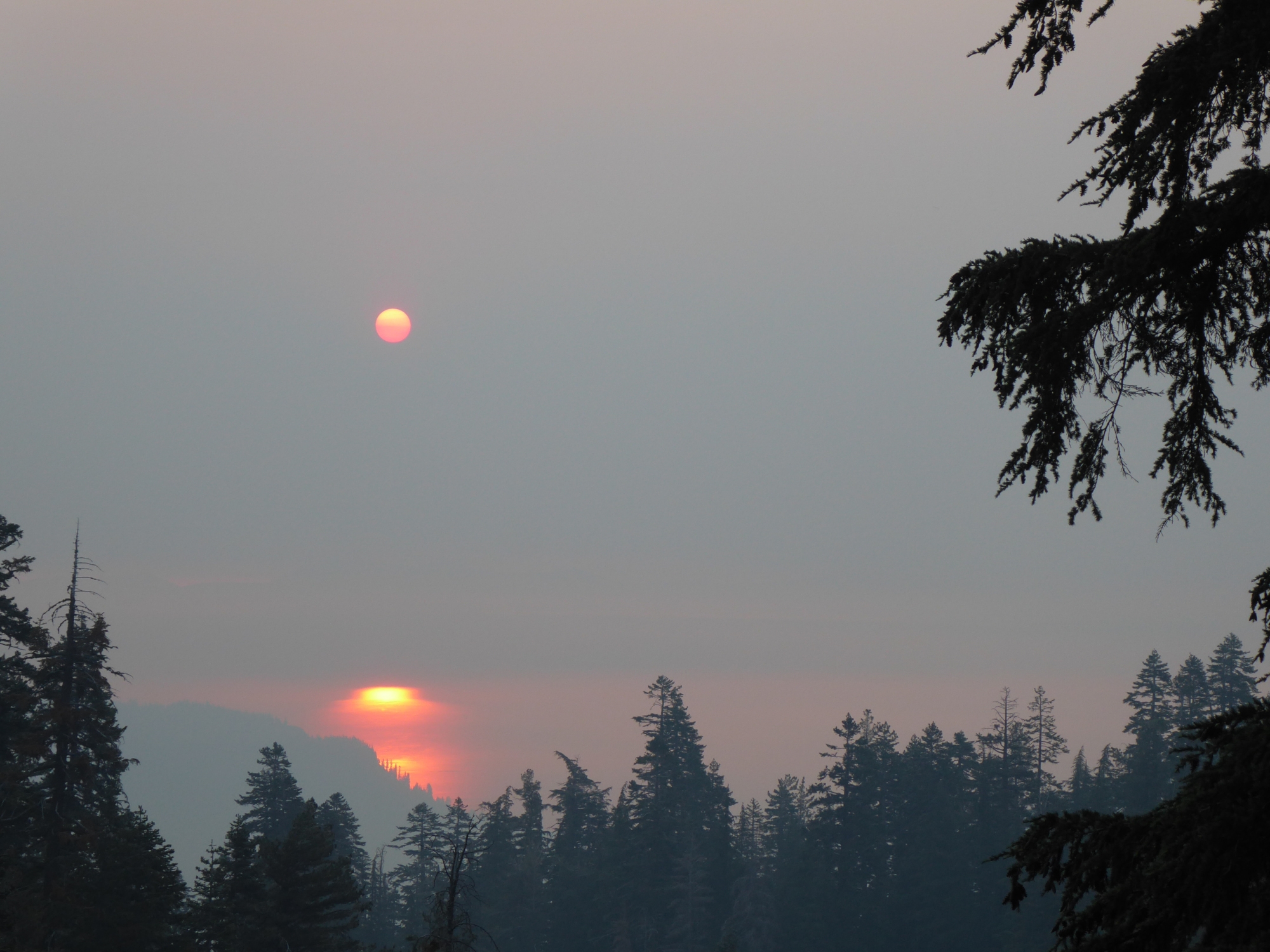 It ended up being a hot, windy day. It was also smoky, then just hazy, then smoky again. I wasn’t aiming to reach Donner Ski Ranch, but that was the target of everyone I spoke to, so I hiked a few extra miles. (I really should have hiked farther the previous day. And I should have rationed my snacks better.)

I arrived at Donner Ski Ranch around 5 PM, and saw a few familiar faces. There was also a large group of hikers who I didn’t recognize, and who’d probably been there all day, judging by their state of inebriation.

I dumped my pack, went inside to wash my hands, then came back outside to pick a table. I caught the eye of one of the drunks “tired and emotional” hikers from the large group. He separated from the pack and meandered in my direction.

His opening declaration was short and to the point, “You’re shiny!”

He was quite right. Not only am I bald, but I’d re-shaved my head when I was in South Lake Tahoe. That was also the last time I’d showered, and it was three days ago. By now, I was covered in a layer of dirt, salt and grease for each day I’d been on trail. All of that was topped with a sheen of sweat.

Worse-for-wear guy pointed to my head, “Can I touch you?”

I eventually managed to convince him that there would be no touching. He took the news well. As he turned to go back to his group, he spotted a pair of female hikers. He wandered casually over to them, sat down, and started trying to persuade them they needed a foot massage.

However much the bartender was getting paid, it wasn’t nearly enough. Somehow, she was managing to stay on top of food orders, preparing drinks, waiting/bussing tables, and rebuffing several carbon-copies of worse-for-wear guy. Most of the interior tables were occupied, as was the entire length of the bar. While I waited for a space at the bar to open up, my nostrils gradually became accustomed to the smell of alcohol-combined-with-unwashed-hiker.

The Farout comments assured me that I could claim a free 40 oz. bottle of malt liquor if I showed my permit. Sure, I was only hiking from Tuolumne Meadows to Siskiyou Summit, but it never occurred to me that a free beer might come with terms and conditions. The guy in front of me moved away from the bar, and I took his place. When I eventually got the bartender’s attention, I ordered food, and handed over my permit. She looked at the details, handed it back, and shook her head. She also gave me a sympathetic smile and a quick explanation. 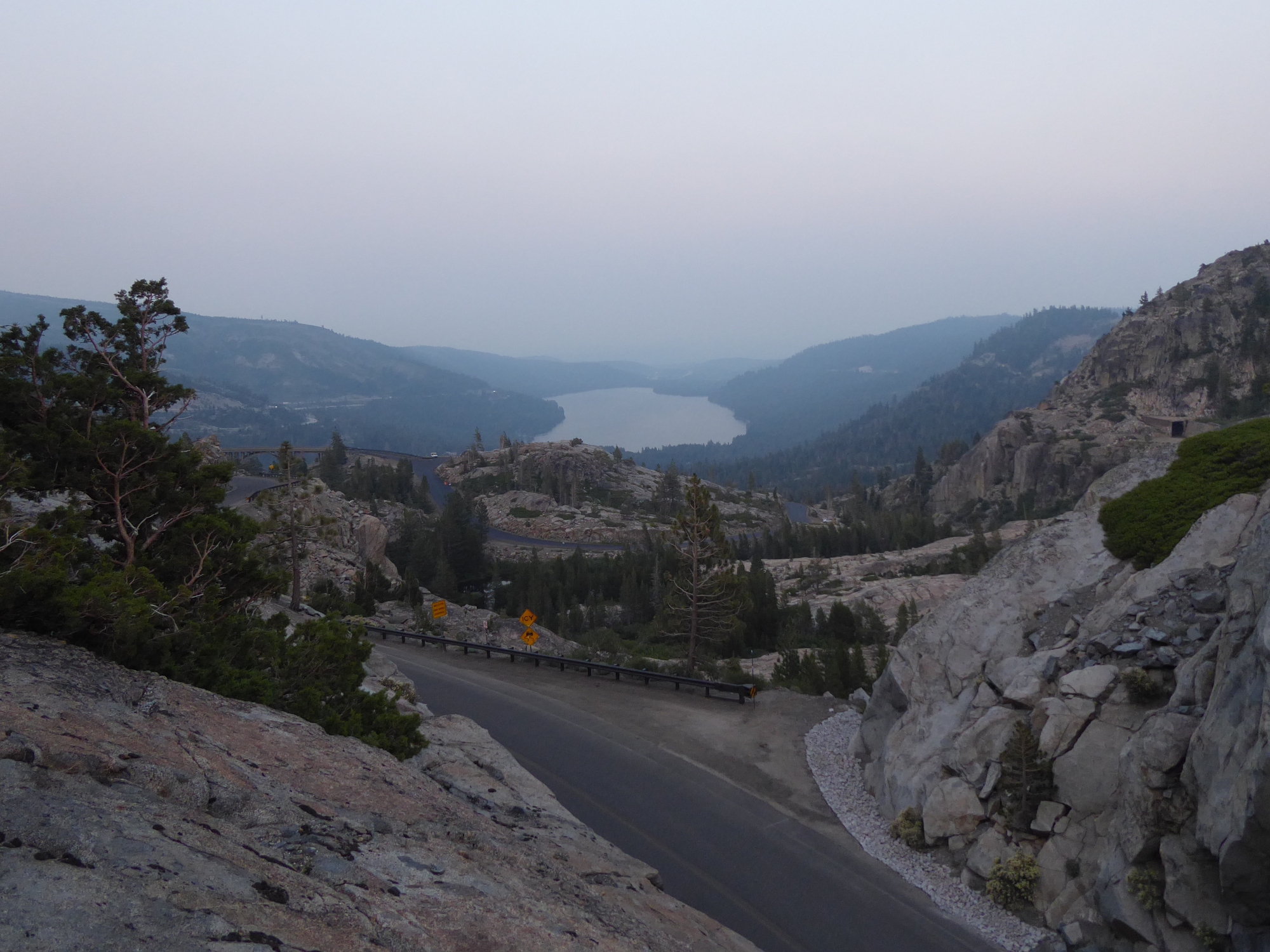 Going back to the PCT after Donner Ski Ranch.