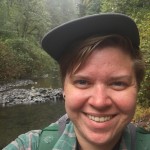 In my first few weeks on trail, I learned a lot of lessons the hard way. One hundred miles from Campo, I’d endured blisters stacked within each other, been given a pretty great trail name, and found an even better hiking partner.

I started hiking from the PCT’s Southern Terminus on April 4, after spending the night at Scout and Frodo’s house in San Diego. They’re a very generous couple who host PCT hikers overnight and provide shuttle service to the trail. I started hiking in a group of 26 people whom I’d met and had dinner with already. Lots of those people have become my close friends, and several of us are still hiking and camping together.

I decided in the beginning to start hiking slowly. I’m hoping to avoid overuse and stress injuries by gradually building up my daily mileage. Luckily, I’ve met lots of other people who had the same idea. It’s taking time for our bodies to adjust, but we’re all looking out for each other and taking care of each other. People are starting to group into duos and trail families already, and I’ve been surprised at how quickly I’ve become invested in all these other hikers. We seem to care about and trust each other almost immediately. 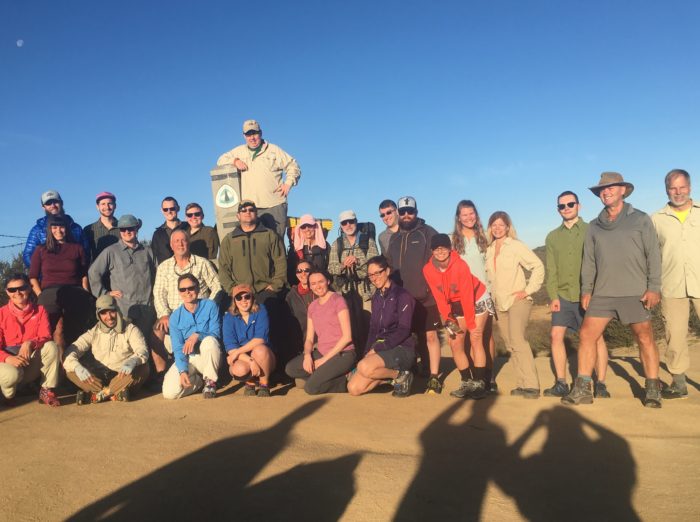 Our group from Scout and Frodo’s.

Almost everyone has gotten blisters. Some of us have been more unlucky than others. I’ve been plagued with bizarre blisters from the beginning, including a few left over from my time on The Lone Star Trail last month. I’ve been experimenting with different shoe and sock combinations, and learning a lot about first aid.

I started the trail in Salomon Speedcross 4 trail runners. They were men’s size 8.5; I typically wear men’s 7.5. I’m usually hiking in Injinji liner toe socks with Darn Tough hiking socks over those, although I’ve also tried Injinji Trail 2.0 hiking socks, Injinji compression socks, and Wrightsocks occasionally. By the time I made it to Warner Springs Community Center at mile 109.5, the Salomons were getting too tight. I had large blisters on the bottoms of my feet and the ends of a few toes. Pilsbury with 2 Foot Adventures was there to the rescue and outfitted me with a pair of Altra Lone Peak 3.0 trail runners in a men’s 9.5, and some Leukotape. I’d been taping my feet with duct tape and sweating it off. The old blisters are now healing. I’m still getting a few new smaller ones and trying to figure out why. But that might just be part of the trail for right now. 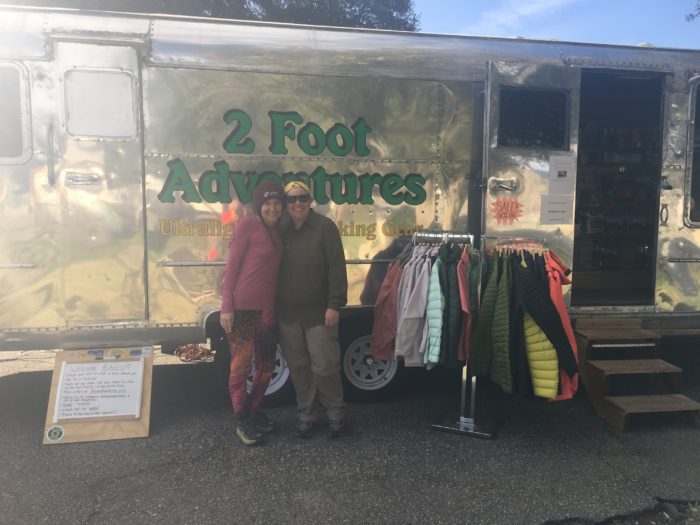 Pilsbury and me in front of 2 Foot Adventures mobile gear shop.

Getting a Trail Name

On the PCT, most people end up using a trail name, often based on something you’ve done or a personality trait. To be honest, it was one of the aspects of trail life I was most nervous about. A trail name is usually given to you by someone else. I was pretty sure I’d end up doing something dumb and earning some hilariously constant reminder. It felt out of my control before I got here, although so far everyone I know has had the chance to accept or decline their trail name.

Some people started the PCT with trail names already. I met people like Rewind (now called The Rainbow) and Trainwreck at Scout and Frodo’s house. Other people got their names early on. Rebecca became Chef when she cooked spaghetti for a dozen of us in Julian. Jason started the trail with a waterproof backpack but popped a water bladder inside it, landing him the name Fishtank. Lindsey became Tribute after she found a paracord bracelet placed in the desert by U.S. soldier Brian Brackus’s father. (We later learned that Brian’s dad, Dragon, is also hiking the PCT this year.)

After 109.5 miles, I hiked into Warner Springs alone and with no trail name. I saw Tiny in the parking lot of the community center. We’d started the trail together but hadn’t seen each other in a few days. She said she’d been brainstorming with our new friends about a trail name for me. Tiny wanted to call me Spirit. She said, “For so many of us starting out you were like our spirit guide and got us all through the first few days that were really rough.” I was pretty shocked and just sort of dumbfounded. I mean, how can you beat that? I’m honored to be Spirit; it feels like a good challenge to live up to. 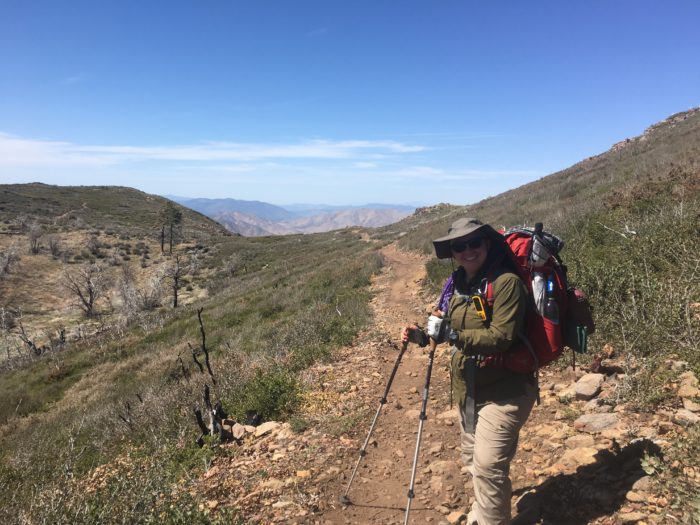 Me in the early days, before I had a trail name.

Finding Roy, and Losing Him for Now

I met Roy from Tennessee at Scout and Frodo’s house. We sat together at dinner and breakfast, and he seemed to be the only other person I met right away who was planning to hike strictly ten-mile days early on, just like I was. We both knew we were capable of biting off more than we could chew, and we’d both preemptively set limits on our early days. Roy also seemed genuine and spontaneous, but in a uniquely funny and kind way. We clicked immediately.

In the morning, Roy left the Southern Terminus shortly before me. I caught up to him after lunch, and we hiked together the rest of the day. We were inseparable for the first week. Roy and I had very similar hiking strategies. We both preferred to wake up around 4 a.m. to hike before the heat of the day. We’d sometimes cowboy camp (sleeping on the ground with no tent) to save time in the mornings. We also generally hiked at the same pace.

Roy and I got to know each other, spending our predawn mornings sauntering through the desert together. We’ve got vastly different backgrounds and he’s my mom’s age, but we became close friends very quickly. We had similar personalities; he could take my crap and dish it back. He put up with me when he had no reason to. One day in camp I saw him sitting with people, making new friends. I walked over, threw his hat in his lap, and told him to wear the damn thing if he was going to sit in the sun. He said, yes ma’am. Then someone asked how we were related, and we both acted disgusted by the idea.

At some point during the first few days, Roy and I decided to be hiking partners. We took care of each other like family. We decided that for the beginning of the trail, our loyalty would be to each other, and we’d pull each other through, even though our partnership could likely be pretty temporary. I helped him pull cactus out of his backpack on day three, and he helped me learn how to tape all my new blisters. 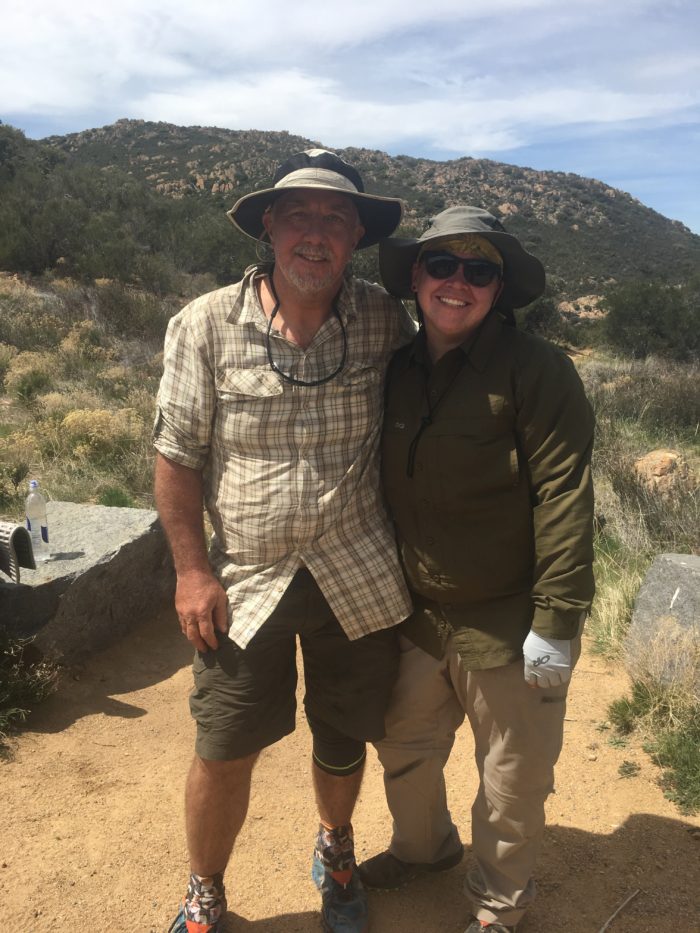 Roy and me. His backpack is in cactus in the background, but we didn’t know it yet.

Roy and I hiked 76 miles together, and camped at Stagecoach RV Park outside Julian, Calif. We both knew our first separation would happen eventually, but we didn’t know how soon. We were sitting by the pool in the shade of the early morning, talking about our plans for the day. I needed a zero day (a rest day without hiking any miles), and Roy wanted to keep going. We both genuinely want each other to do what’s best for ourselves individually. Our split was amicable and loving, albeit sudden and strange. We got a ride from the RV park toward town, and our hitch dropped Roy off on trail along the way. We hugged and said our first “I love you” on the side of the road at Scissors Crossing.

We’ve seen each other a few times when our zero days have overlapped and we miss each other like family, but I’ve now hiked over 100 miles without Roy. He also took a few extra zero days along the way, and so he’s a few days behind me right now. I’ll be excited to see him again, but for now half the fun is wondering when he’ll catch up.