Blood and Tears in the Sierras 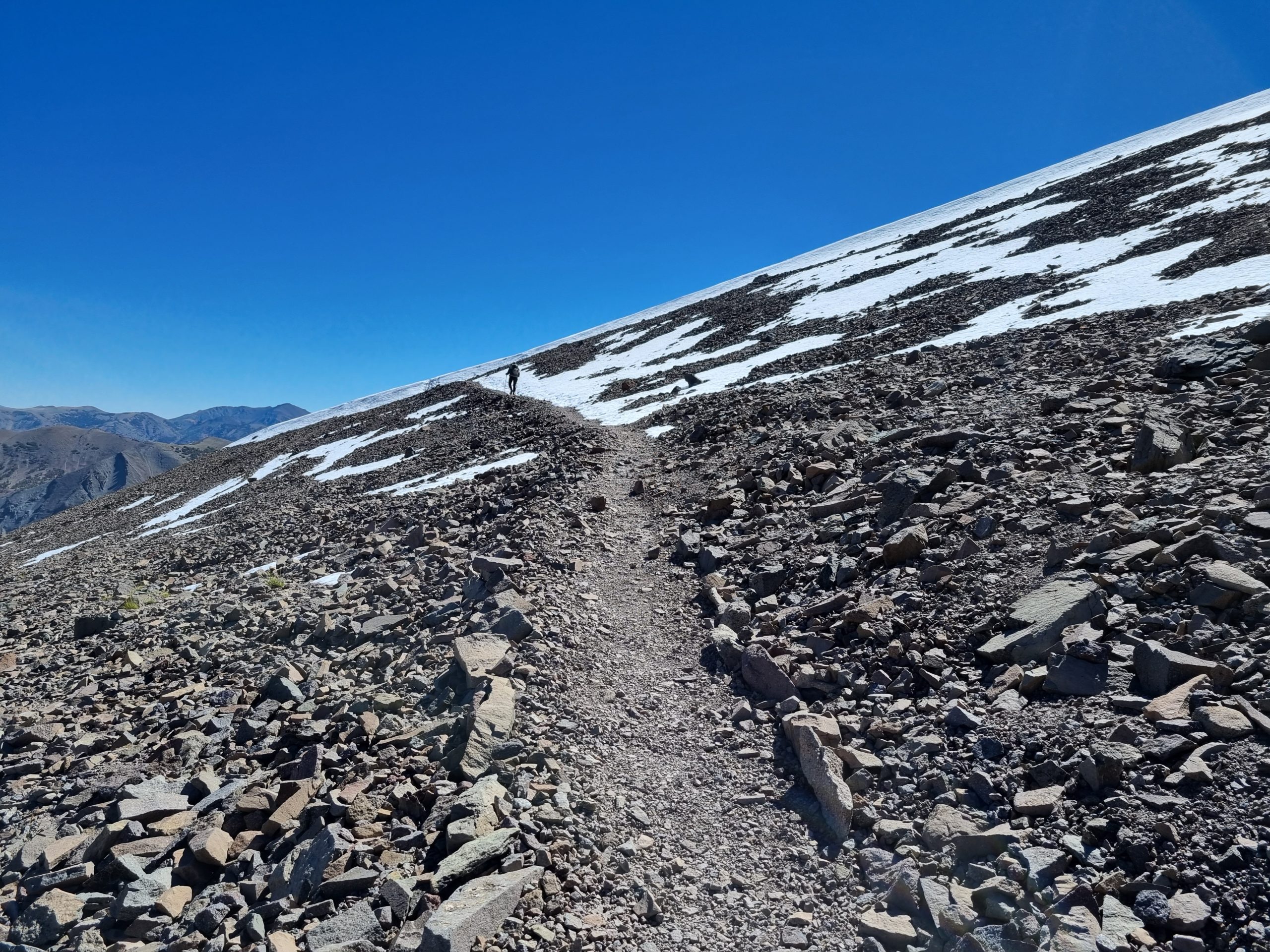 I woke up at 5 when the resorts generator went on but fell asleep again and slept until 06.30. I went to have a breakfast and chatted with two flip-flopping NoBos.

I sent my bearbag to the Southern Kennedy Meadows, I had forgotten to send it when I got my bearcanister.

Me and five other got a ride to the trail. We started hiking with Nine Beers and hiked the whole day with her. Train and Charger were not far behind. It was super windy! I have never experienced a wind like that. We had to climb to 11 000 feet and the trail was as steep as the Knife’s Edge. That in combination with the insane wind made it quite scary. I couldn’t wear my hat as it would have blown off in a second. You could barely hear another person shouting as the wind was so loud. There was also a small patch of snow left at some point from the snowstorm one week before.

The trail was very beautiful, though. After about eight miles over sandy and exposed mountains we descended to more forestry landscape and then rocky areas with streams and lakes. We managed to hike good 19 miles despite a late start and a lot of climbing. We camped by an amazing lake at 9200 feet and had dinner by a lake. It turned out that we both had hiked The King’s Trail in Sweden the same time last year and we hade similar experiences from it. It was nice to not need to camp alone for once. 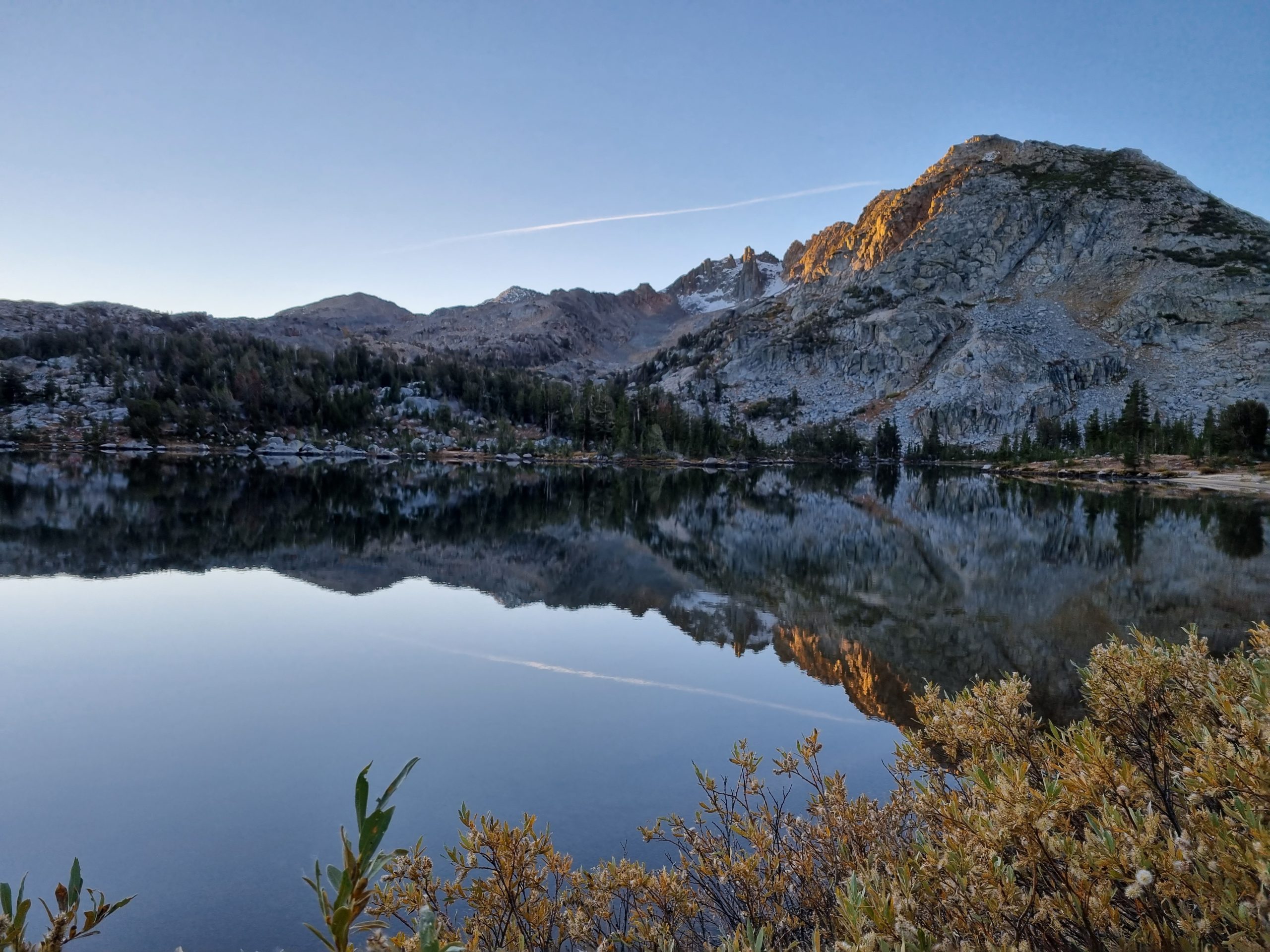 My alarm went on 05.15 and I felt it was freezing cold outside. I was not eager to get up but managed to start walking at 6. Nine Beers is not a fan of early mornings so she kept on sleeping until seven.

I got up to Dorothy Pass and it was crazy beautiful but very cold. After that I got into Yosemite wilderness and the first lake I saw there was just like from a broschure for tourists. Unfortunately it was still too cold to have breakfast there so I had to walk until half past eight before I could stop.

The landscape was again crazy beautiful and I saw so many potential climbing rocks I was going crazy. I was feeling tired and was having many breaks. I stopped for a lunch at Wilma lake and Nine Beers caught up with me there. We were telling poop stories and Nine Beers gave me some cream for my crazy mystical rash I am having in my legs. It has been keeping me awake at night.

I was listening all day Steven Fry in America and learned about states I barely knew existed. I almost forget in which country I am sometimes when all focus is going on counting how many miles and how much elevation gain one has to do each day. This days climbs were surprisingly hard as they were very steep and the path was rocky with very long steps that were exhausting.

I got to a tentsite at seven and had to stop there as I was exhausted. Nine beers had continued on but I assumed I would be passing her the next day as she was not an early bird. 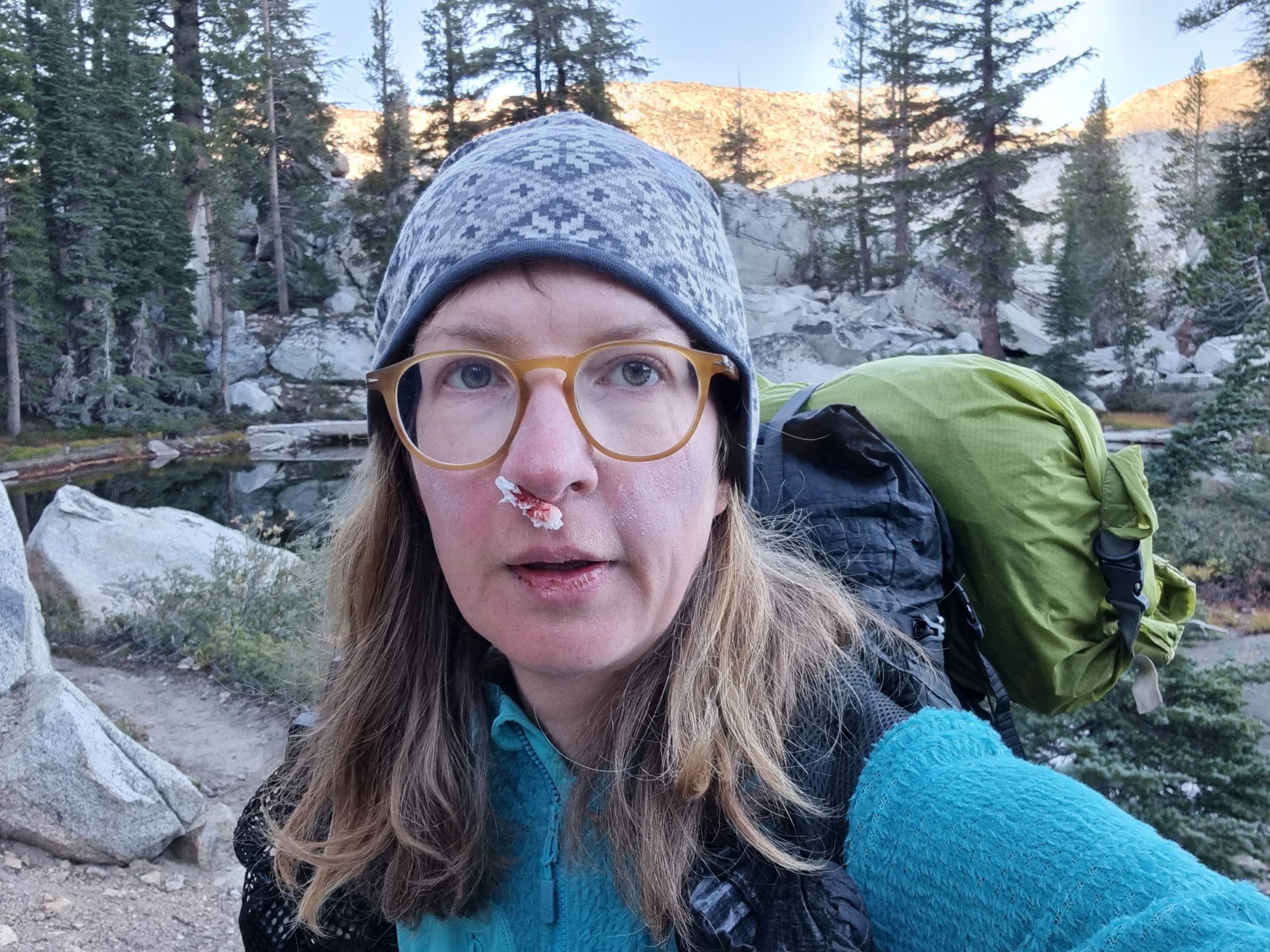 I got up into a cold morning and started walking around quarter to six. I got nosebleeding and had to stop by the trail. That is a typical problem I have when it’s cold and dry and I was afraid to get one of those major bleedings. It is not fun to have blood all over ones clothes in the bear country.

I climbed over some amazing passes amd stopped for a breakfast by an idyllic lake. No sign of Nine Beers, probably she got ahead of me just before.

It was a lot of climbing, the worst one going up to 10 500 feet to Benson pass. By Smedberg lake I met Frank & Kelly and had lunch with them. It was almost warm enough to swim, I should have done that.

The climbing almost killed me and I was very slow. There was another amazingly beautiful lake,Miller Lake that had a sand beach. Unfortunately it was too cold to enjoy it.

I ate my dinner before camp and came down to a creek and set up my tent in the dark. I saw a headlamp approaching and knew it was Sherpa as I’d heard he was behind me. He decided to camp at the same spot where I was in his hammock. 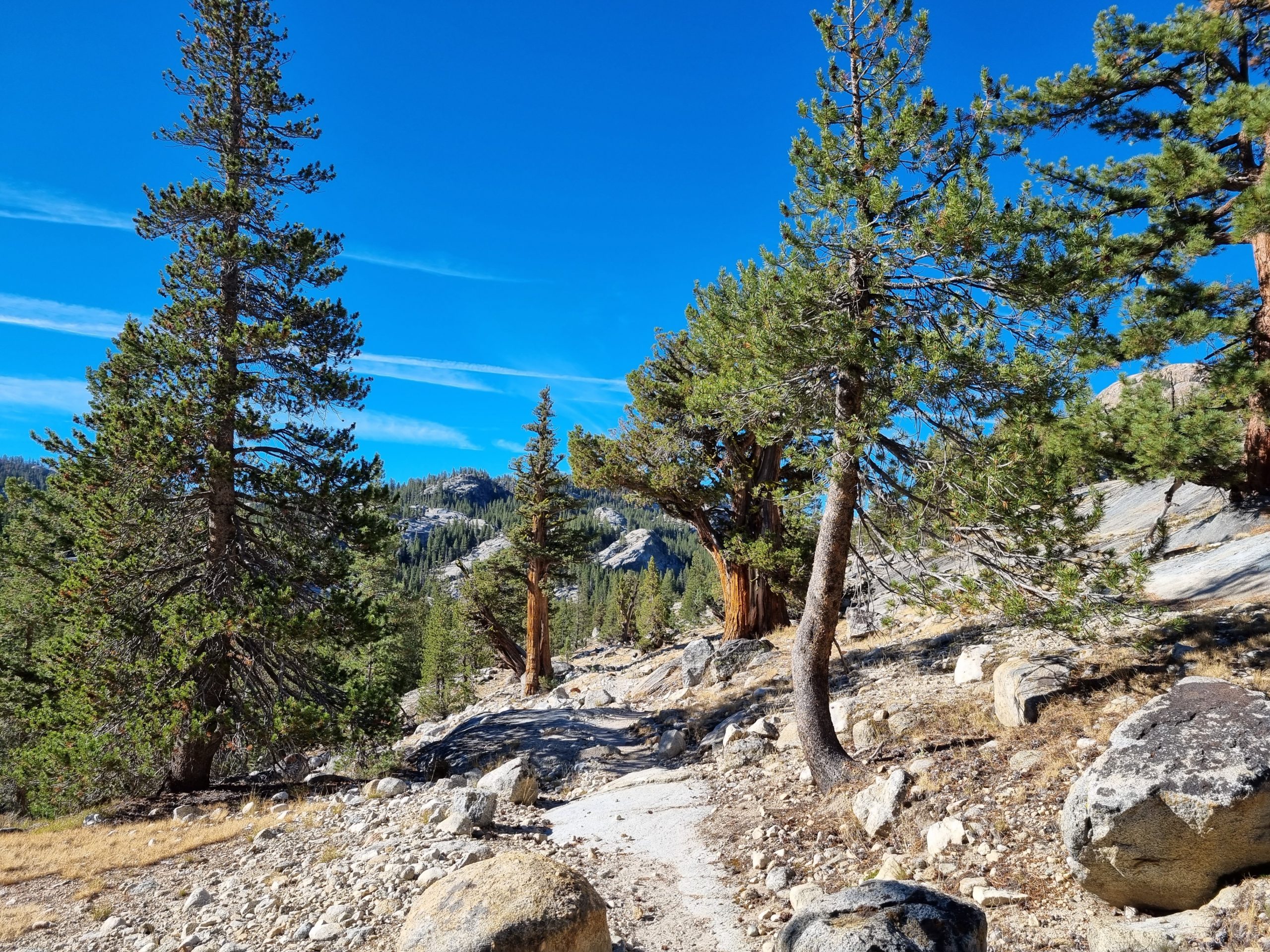 It was very cold when I got up at 05.15. My shirt I had rinsed had frozen solid and it was cold to filter water. I was out of breath starting a climb but fortunately the rest of the day was relatively flat. I met Sherpa who had frozen his ass off that night.

It was already almost eight before I could stop and have a breakfast. By nine it was so warm I could walk in my t-shirt. I washed myself in a stream and it was heavenly.

There were a lot of sectionhikers as this was Yosemite and passing the John Muir Trail. I had been listening to John Muirs essays so it was cool. I had lunch by the McCauley Cabin unusually by a picnic table!

I walked on but never saw the other SoBos. I had some tortillas and whiskey by a river and it started to get cold at 6 p.m. already but I was up at almost 9000 feet. I walked past a campsite that was busy and to the next one where a couple was making a fire. I asked if I could camp there and they invited me to join by the fire. They were from Czech and doing a four days hike. They were impressed when I told I was doing the PCT. We had a nice talk and they gave me an apple and I gave them a mini whiskey.

Day 87: 22 miles. Tentsite by Lyell Canyon to a forest near Middle Fork of the San Joaquin River 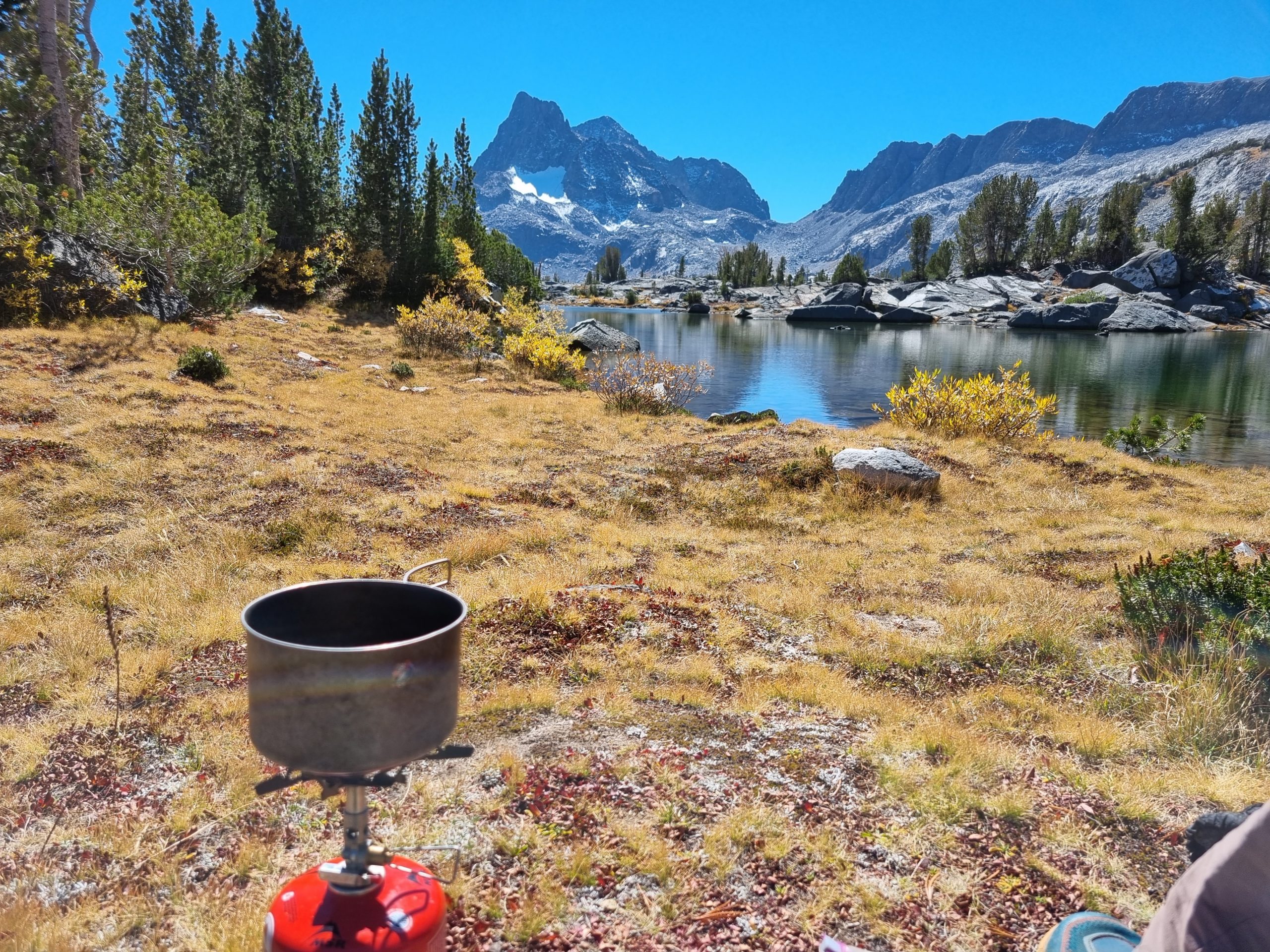 It was really cold in the morning and since I had closed the both tentdoors the tent got condensation that had frozen on the inside of the walls.

I started hiking at six and had a crazy 2000 feet climb to Donohue Pass. I stopped at 10 000 feet and had a breakfast. The climb was insanely beautiful, though. The whole day was one of the most beautiful on the trail with snowy mountains, lakes, streams and meadows. The Thousand Island Lake was really beautiful too.

There were surprisingly many section hikers considering it was a Monday in October. A man hiking with a leg protesis said there was exceptionally lot of water in the streams for this season, all because of the snow a couple of weeks ago.

I had lunch by the amazing Island pass and one of its lakes. I dried my damp stuff and saw that the cold had drained out my powerbanks. The rest of the day I tried to navigate without my phone and didn’t listen to any podcasts or audiobooks to save battery. Since the morning started with a slow climb I was compensating it by half running from 2 p.m. to 7 p.m. when I got to camp earlier than I had thought which was good since I couldn’t charge my headlamp anymore. I camped in the middle of a forest.