How does that old song go? What a difference a day makes?

I woke up at the hostel, gorged myself at the Driftwood Cafe, took my third shower, and was ready to go by noon. Rene from the other day had given me her number and told me to call her if I needed a ride, and true to her word, she scooped me up and I was back on trailer by about 1pm.

I fell in with a Tahoe Rim Trail (TRT) hiker named Cody and we hiked on and off for a few miles. When we got to Echo Lake, who was there but Faceplant! We caught up briefly over ice cream milkshakes, $8, and made a plan to meet up at around 1102. She had a few chores to take care of while we still had cell service, but I had no doubt she would catch me later. The trailer wound gradually up and along Echo Lake and then veered off uphill towards Aloha Lake. Except the uphill was an easy climb over the next 3 miles where I did not even break a sweat. 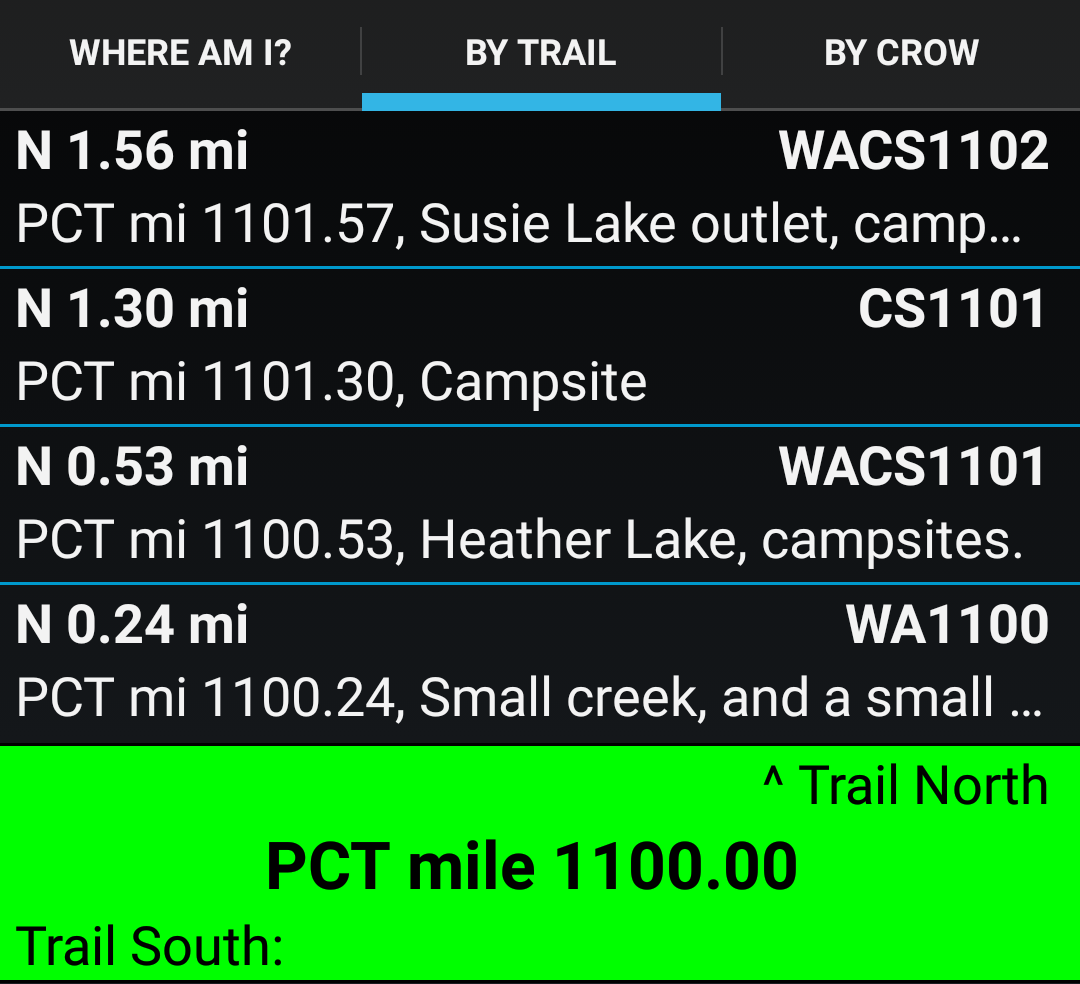 Eventually Cody and I found a tent site which was not full and he was done for the day. I pushed on to 1102, only to find that the water source was a mud puddle and it was full of mosquitoes. Backtracking a bit to Susie Lake, I found a spot a little bit up into the wind but still close enough to the water to get it easily. 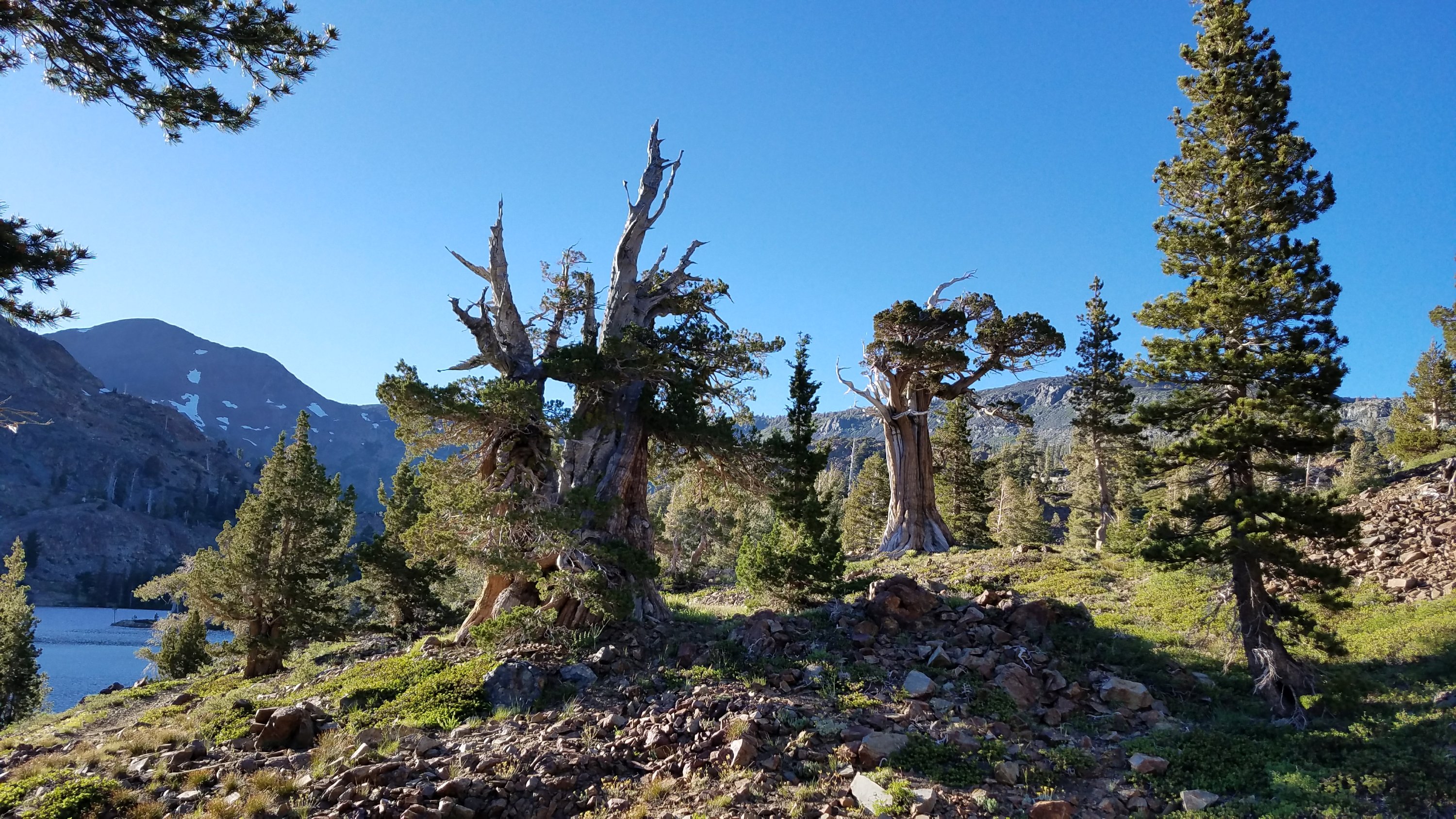 I am convinced I heard this tree say “Hoom Hom!” as I passed. Its another pretty Entish place. 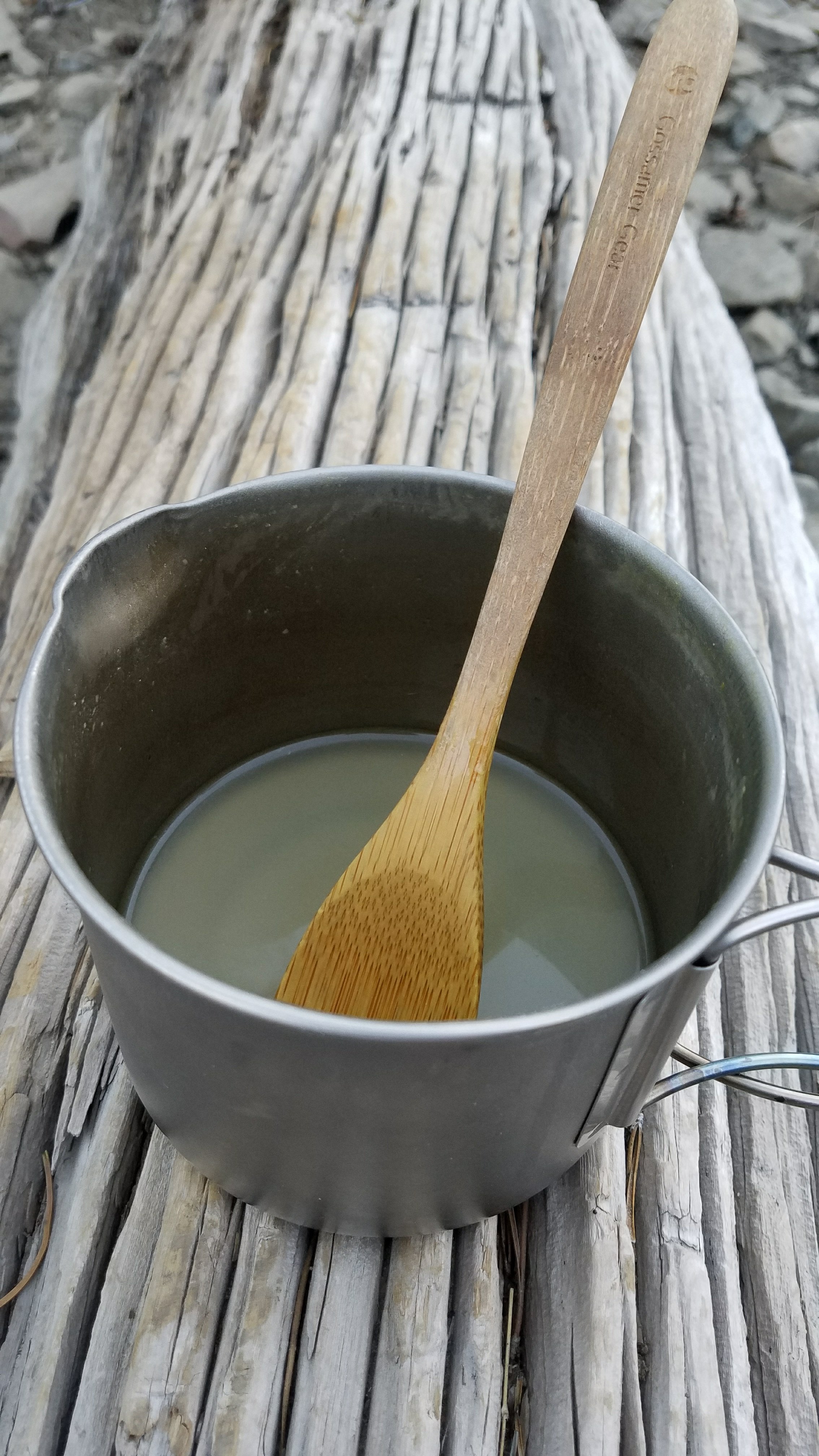 Today marked the possible temporal halfway point of my trip. If the average trip is 5 months that’s 152 days. Today was day 76. 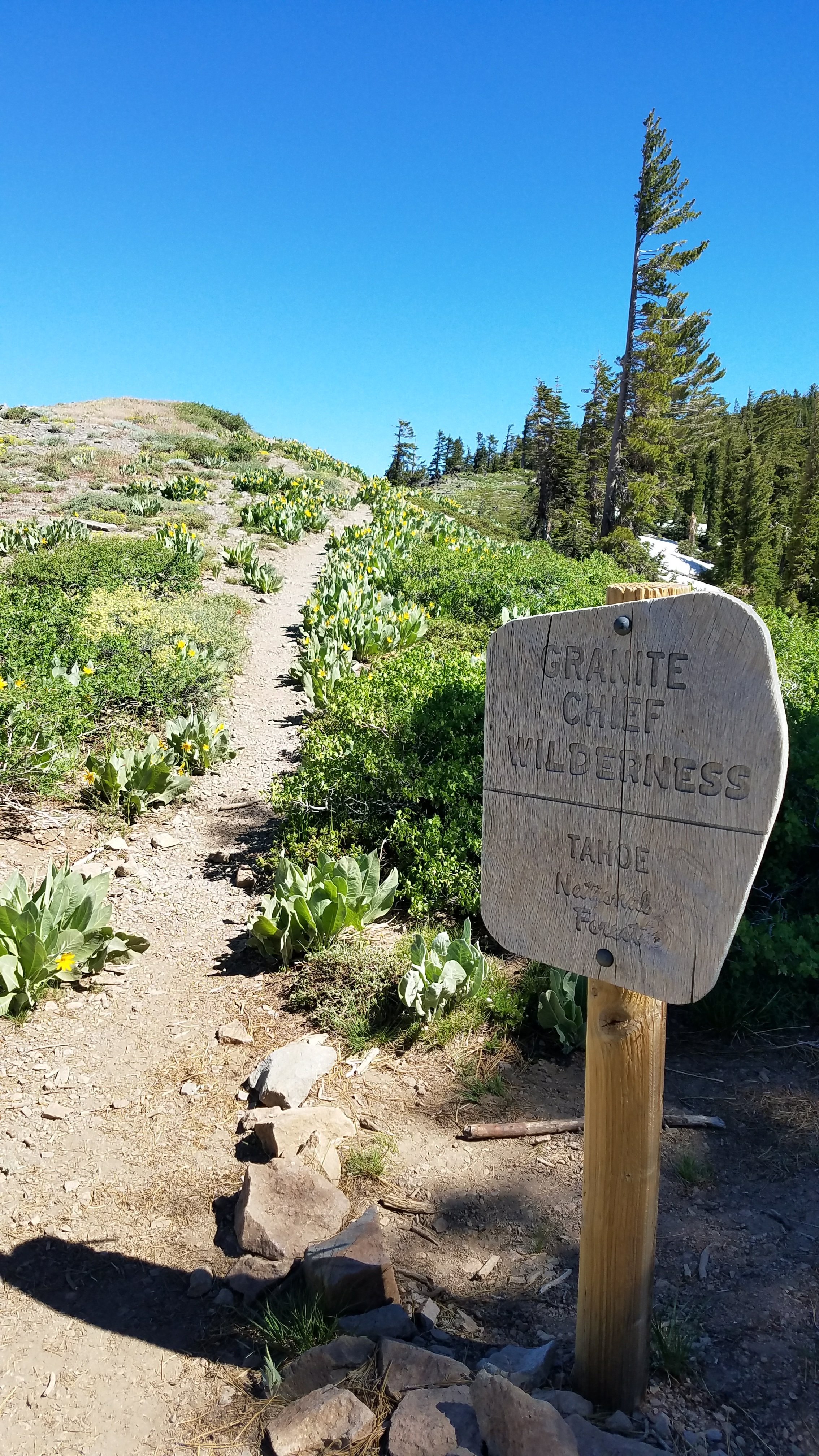 And not a bad day, I’ll things considered. I did just under 22, which is right around what I’m looking to do every day. Ideally I would be doing 20 / day and taking no zeros, however, if I do 21 or 22 per day it kind of saves up some miles for me so that I can take a zero without messing up my schedule.

Speaking of schedules, I am not really on one. But, I have no desire to walk in multi-day rain storms, snow, or extended periods of sub-freezing temperatures when I get to Washington. I have kind of pencilled in mid-September as my ideal end date. September 1st would be better, but I need to be realistic. With my feet, back, and lungs the way they are, I think 20-22 miles per day is a realistic and achievable goal. If I needed to get to Canada in a hurry, I would take a plane.

Today had a couple of big climbs but right in the middle around lunchtime I got to do a multi mile ridge walk along this spine of the mountains that separate the Tahoe basin from everything else. The wind was crazy but it also kept me cool and kept the mosquitoes away. The trail went past the ski resorts, where it was kind of sad to see the fences, power lines, and ski lift apparatus. 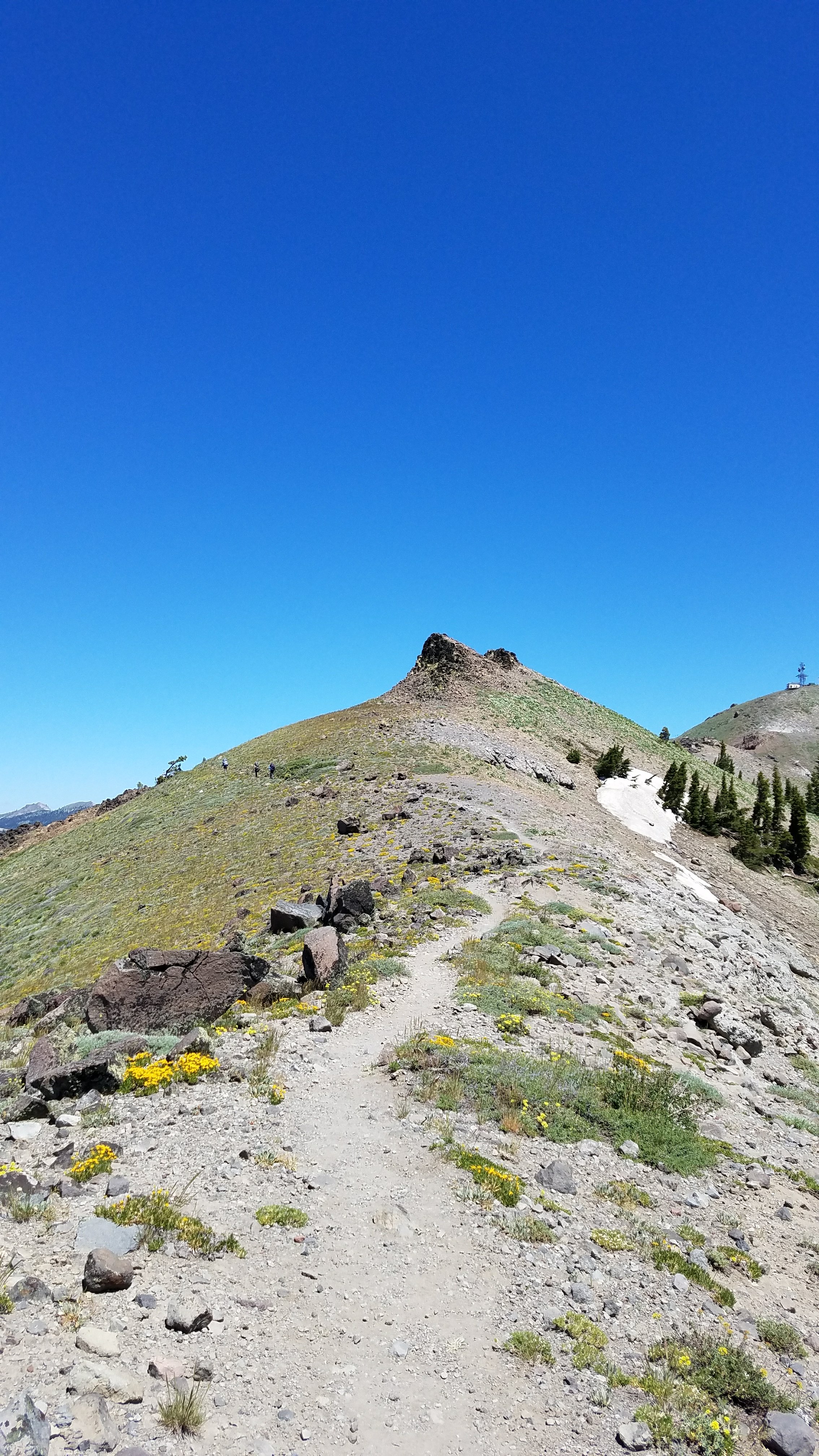 I said goodbye to Faceplant today, as she’s doing some big miles in order to get to Soda Springs early tomorrow morning. Her goal there is to bounce her resupply box up to Sierra City. She realized that she had enough extra food in her bag and would be picking up a few meals in Soda Springs, so there was no point in carrying all the extra food 2 days to a post office. I wished her all the best but I knew I wasn’t going to be able to do the 25, especially when the last bit was up and over Tinker’s Knob (700 feet in just over a mile). I’m also the guy who tells everyone else not to let people set the pace of your hike. So I didn’t. 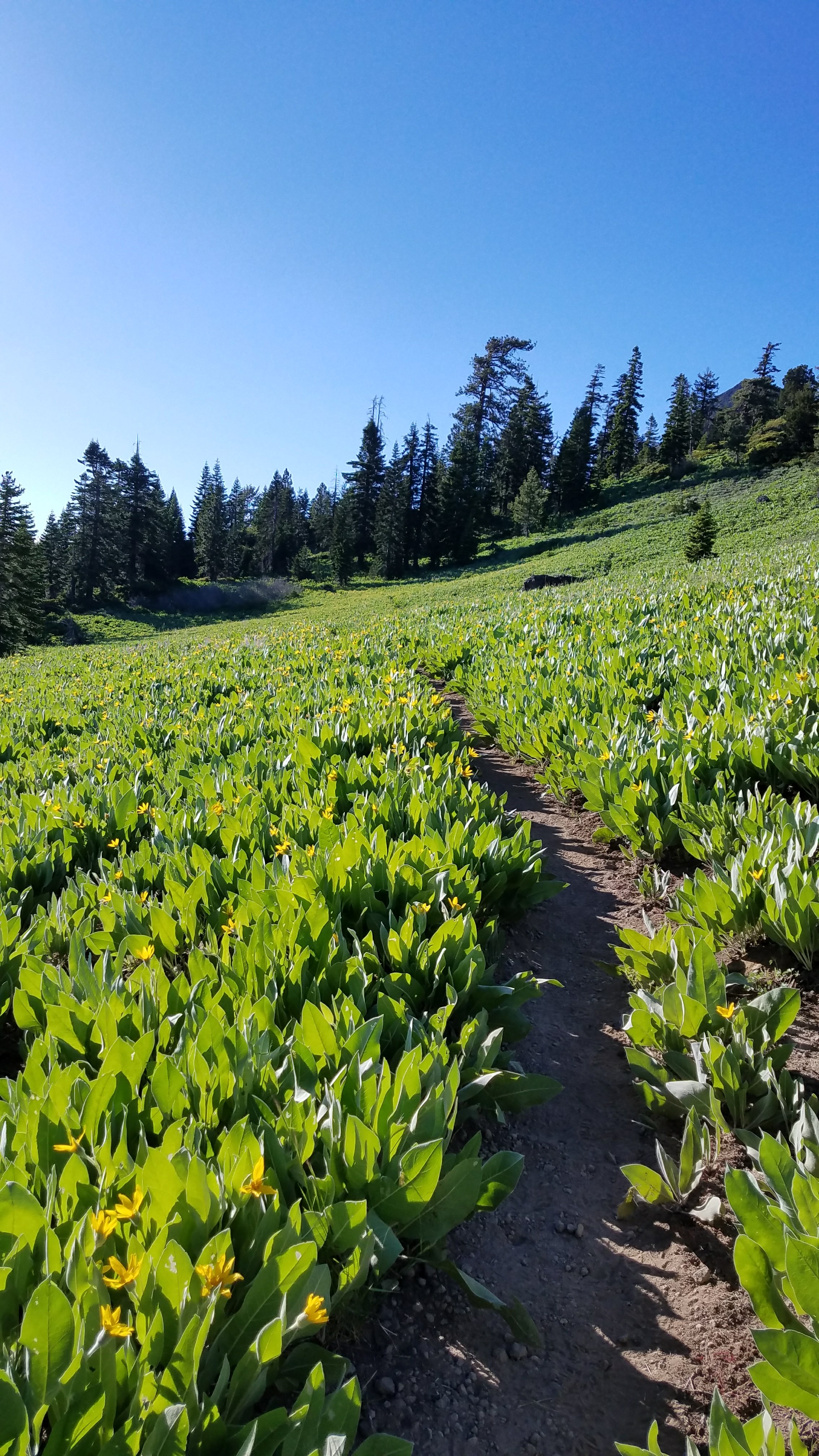 Tonight I am camping solo at the bottom of a big meadow. I’ve got a nice small, safe fire going to keep the bugs away and I’m watching the sunset on some really cool looking rock formations. My concern on this meadow is that these places 10 to be moist overnight. My second, slightly larger concern, is that wildlife tends to be attracted to meadows. And by wildlife I hopefully don’t mean bears. I did see a hummingbird today, though, the first one in probably 600 miles. 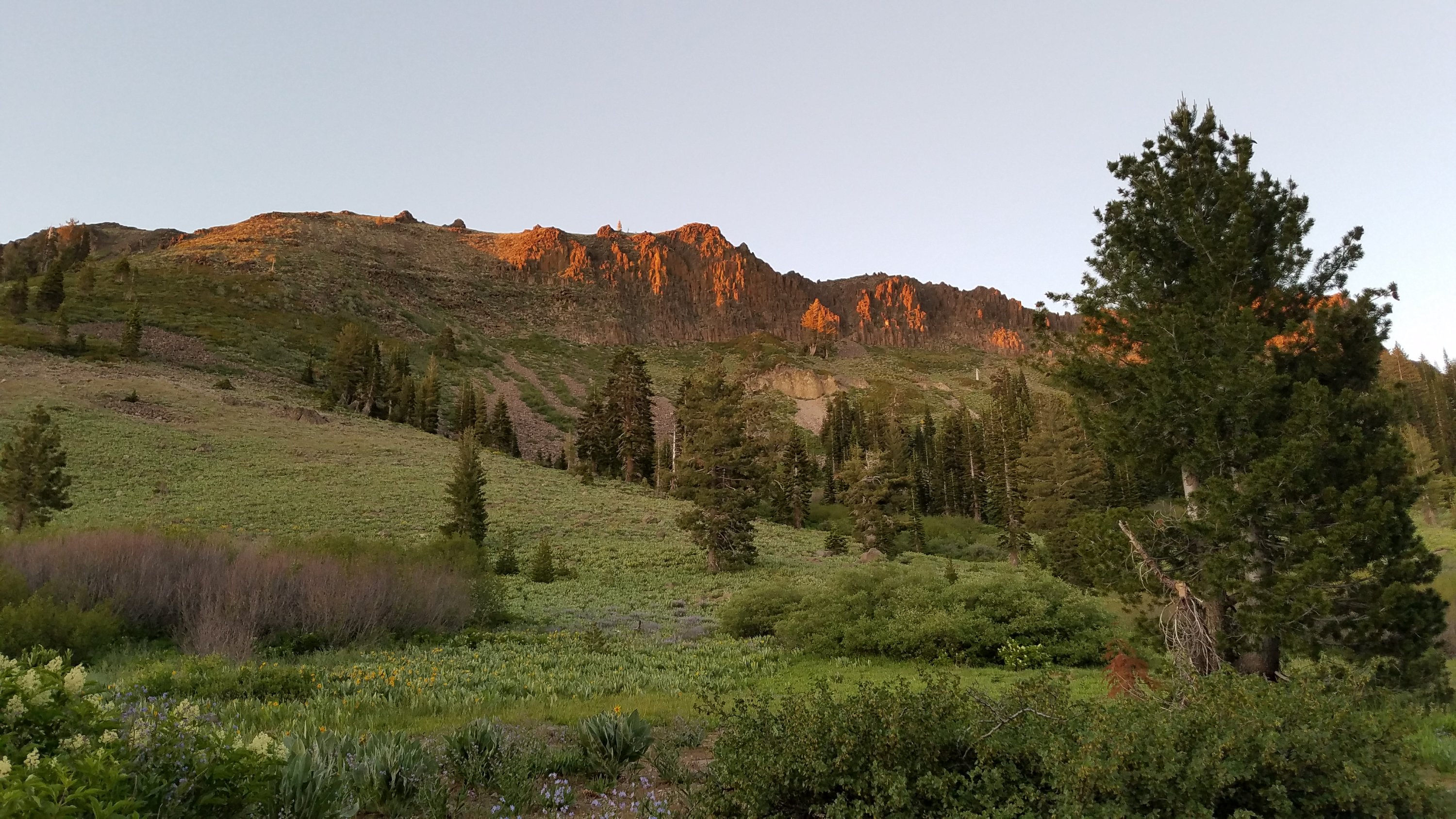 Sitting here letting the fire die and watching the sunset on the cliffs above, I hear nothing but natural sounds and see nothing but natural things. This meadow has probably looked just like this for thousands of years, and assuming nobody does anything stupid, will look this way for thousands more. It’s just a feeling that hits me every once in awhile while I’m out here; the world would keep happily spinning if everyone vanished tomorrow. People talk about saving the planet, but I think the planet will do okay. What we have to do is save ourselves.

After a very windy night punctuated by the full moon blasting in my tent for most of the evening I managed to get on the trail by about 6:30. There was a good amount of up to Tinker knob. I’d end it about half a bonus mile, as I mistakenly took a side Trail down off the ridge towards Truckee. There was some consolation in finding out later that day that Bandit had also made the same mistake.

At some point yesterday I had decided that although I didn’t need to go into Soda Springs for food, I would visit the Donner ski lodge for lunch. Thus, I kind of paste out my morning arriving at the trailhead just before 11. There were a handful of other thru-hikers there already, people who had passed me along the ridge walk. The specialty of the ski lodge is that thru-hikers get a 40 ounce beer for free. Because you can’t drink that much beer on an empty stomach and because it was lunch time I ordered the massive veggie burger and what turned out to be an amazing side salad, chopped broccoli and other non-traditional yet nutritious vegetables.

3 hours later, I managed to get going again. Fueled by ice cream and a little anxiety for only having done 10 miles, I pushed out and quickly covered the two miles to Interstate 80. I got to do another tunnel and before I knew it I was back in the proper Woods climbing away from the Roar of traffic. A mile or so later I hit Castle pass, which as passes go is pretty boring. It was covered in trees. Shortly after that I came on the Peter Grubb cabin, which is a old school but up-to-date Log Cabin in the Woods managed by the Sierra Club. Highlights include solar lights and a composting privy. I had originally planned to only go that far, but it was only 5:30 and I felt guilty for taking so much time off today. Thanks to a note in the gut hook app, I knew that there was camping into miles after a water source so I pushed on.

Immediately besieged by mosquitoes on my arrival, I quickly set up my tent and then lit a small, safe, but smoky fire to stand in while I made dinner. Bandit was also camped near by and he came over and we had dinner together. By 8, or hiker midnight, we were both in our tents.

For some hikers, and I mean hikers like me, a 30 mile day does not simply happen. It takes planning, good fortune, helpful logistics, and resolve. I noticed last night while looking at the trail profile that there was an awful lot of downhill today especially at the end. Even the climbs were short and relatively low grade.

I began to realize a 30 was possible. It would also be super helpful because I would end up very close to the road into Sierra City. While I had enough food to make a day of it, I feel that you’re always leaving opportunities on the table by rushing through a town visit. I’m not exactly sure what’s in Sierra City other than a store and the church, but if Trail Jesus smiles on me, there will be a laundry and a library.

Today was a lot more beautiful ridgeline walking, with views for miles. We walked through fields of these yellow flowers that look like two lips and the purple lupins were everywhere. Midday I caught up with a group of weekend hikers who were doing the stretch from Truckee to Sierra City. It was shamefully gratifying to smoke them on an uphill. I never saw them again.

I leapfrogged with Bandit all day, meeting him for the last time at dinner at around mile 25. He said he was done and truthfully so was I. However, the siren song of the 30 with five to six miles of pretty straight downhill was irresistible. I ended my day winding down Milton Creek Canyon, where I got to see the plants and trees change almost by the minute. Now that I am down at 4500 ft, there are manzanita trees taller than I am, oaks, and some kind of maple thing. It reminds me from a passage from the Silmarillon, where “the air grew heavy with the breath of living things”. Speaking of living things, I saw a deer. Let’s just hope there are no bears. The problem with 4500 ft is that its hot. I’m having to do a bit of gymnastics with my quilt in order to keep from sweltering.