This will be another weird and slightly disjointed post. While the hotel I’m at has Wi-Fi, of course it sucks and so uploading pictures is a pain.  Because the WordPress app on my phone is still all crashy, editing this post is a nightmare.  Using the non-Mobile version of WordPress is downright maddening.   There’s a good chance this will be my last post.  I can’t fight the Internet amd still enjoy myself out here, nor can I burn data uplosding and editing pics over and over.

4000 feet and 14 miles later, I escaped the Belden gravity well (literally and figuratively), and crossed mile 1300.

Belden was a nice little stop, and the Braaten’s place was great, but there were miles to make.  I got lucky with the climb; the whole day was pretty cloudy.  In fact, twice going up the canyon, it actually rained for a bit. 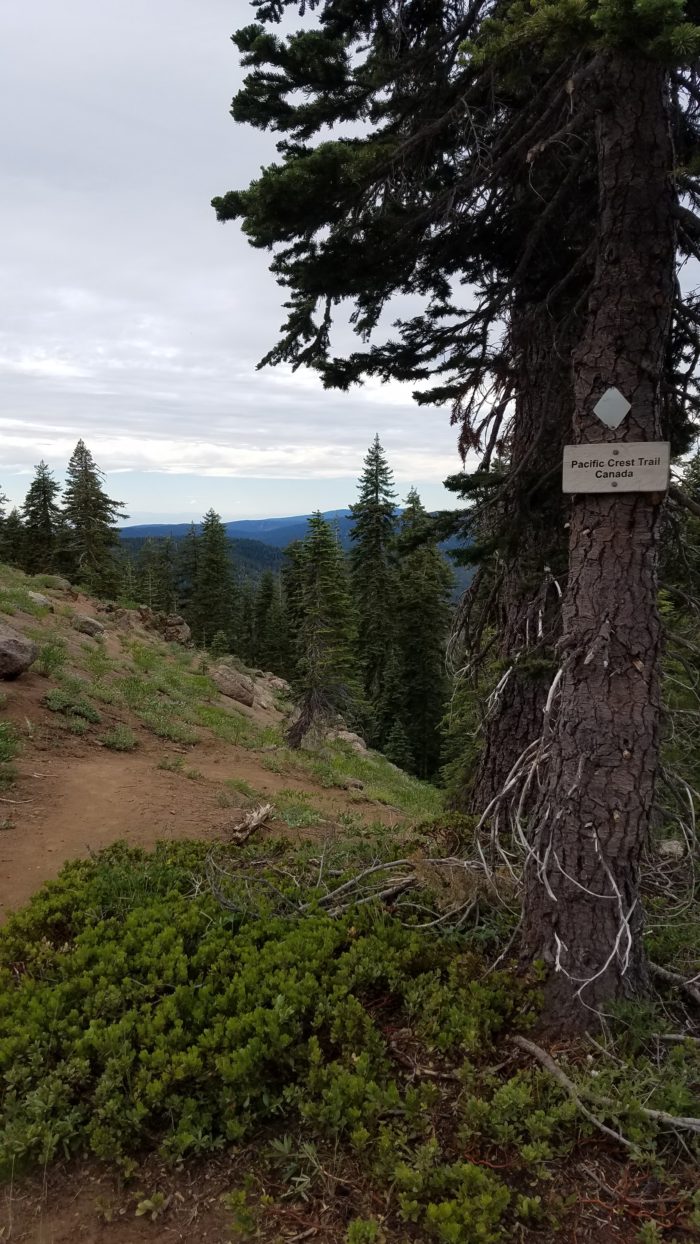 I left late since I waited for the mail.  Sadly, since Belden’s mail is basically a guy in a car, and a closet at the RV park, my packages didn’t arrive.  Half of my stuff is supposedly being forwarded to Castella.

The next day was a lot more of the same kind of trail.  NorCal tends to get a little green-tunnelly. 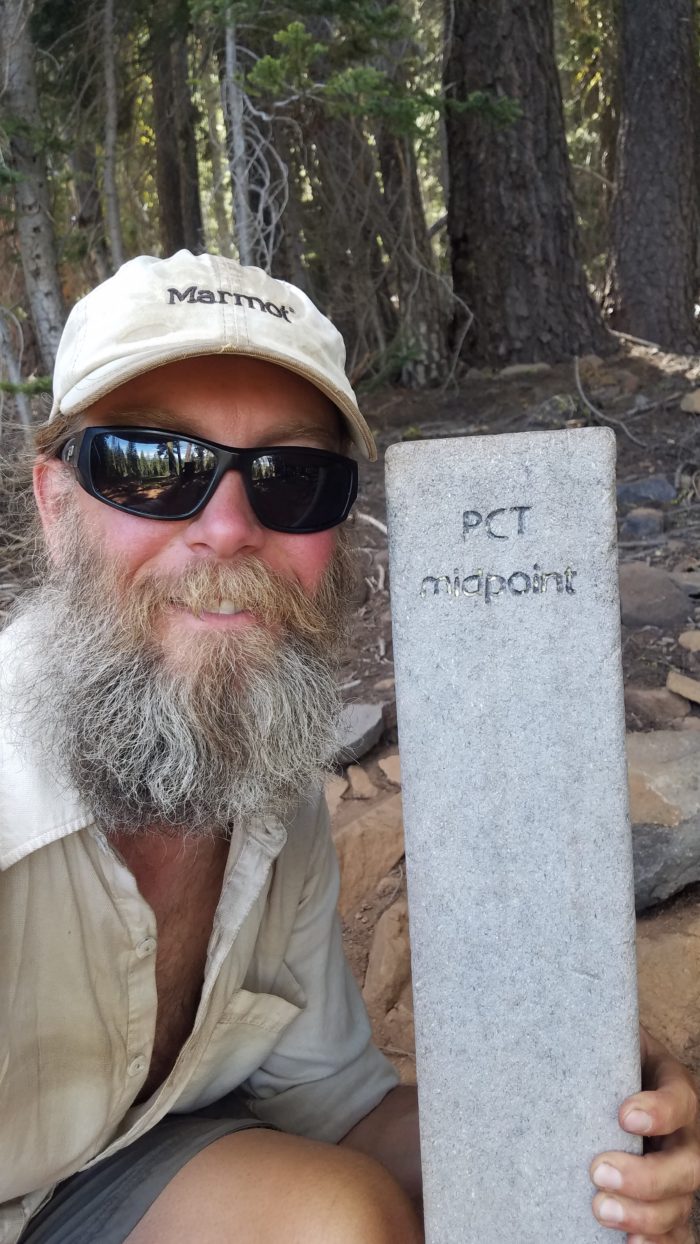 I did it.  Halfway.  Arriving at the halfway mark alone, which isn’t really at the halfway mark anymore, was kind of a bummer.  But after about 10 tries, I got a good selfie.  I saw in the on-trail register that 25 people went through the day before.  The day I hit it, there were about 10.  I waited for a few hours to see if Faceplant was going to show, but she was too far back.  After a few hours and a visit by a very curious deer, I hit the road.  The deer wasn’t really interested in me, rather the salty dirt left along the trail where hikers pee.

The trail twisted down many switchbacks ( of course ) through some pribatrly owned timber company land.  Eventually I got to a series of dirt roads and camped.  Possibly trespassing.

Sunday morning I was up and did the last few miles to the road.  I didn’t really need to get into town, but my guidebook said to definitely head into Chester.  The problem was that nobody was heading into Chester at 6:30 on a Sunday morning.  It took 2 hours to get a hitch.

Chester itself was kind of beat. 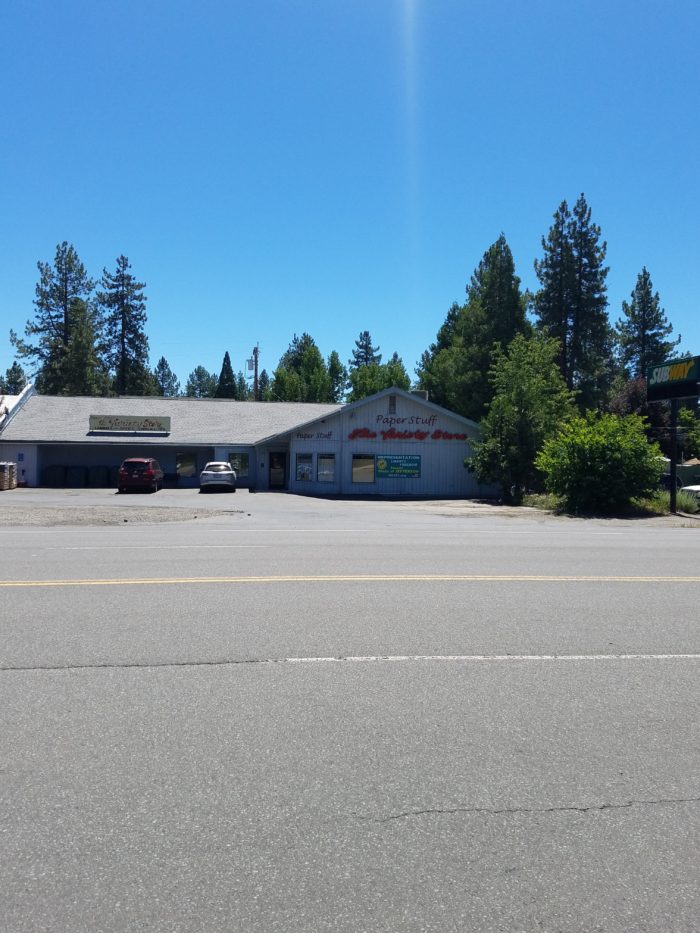 But it had a reasonable grocery store, and a great little cafe, where they had wifi and let me charge my phone.  Because I was dlready in town, and I saw other hikers walking around with clean hair, I went to the three dollar public shower.

I hitched out with Ben and Marissa.  The guy who drove us was a retired Forester and a local. One of the things he explained to us was that the drainage system we saw coming into town was not for floods or water runoff, but in case of an eruption in the Lassen Volcanic National Park. This would guide the pyroclastic flow of lava and mud away from the town and into a nearby lake.

I’d take that as a sign to live somewhere else.

Just outside of Chester, Faceplant caught up to me and we hiked the next couple days together.

The park has bear can restrictions, meaning that you have to have a beer can to camp in the backcountry. Your other option is to camp at the campground in the middle of the park where they have bear boxes. Your last option is to skip camping in the park entirely, by camping before you get into the park and going all the way through in one day. It’s not that big of a park, about 19 miles of Trail from one side to the other. Since I had sent my bear can back at Sonora pass, I chose to do the park in a day.

The rules are there for good reason, as the park is full of bears. I ran into a mama and a yearling who were busy ripping up rotten trees to get at the termites inside. The yearling ran off and hid when I approached, but the mama bear took one look at me and went right back to eating. I’m clearly not a threat to a several hundred pound bear. They also must see people all the time, and so they don’t care anymore. 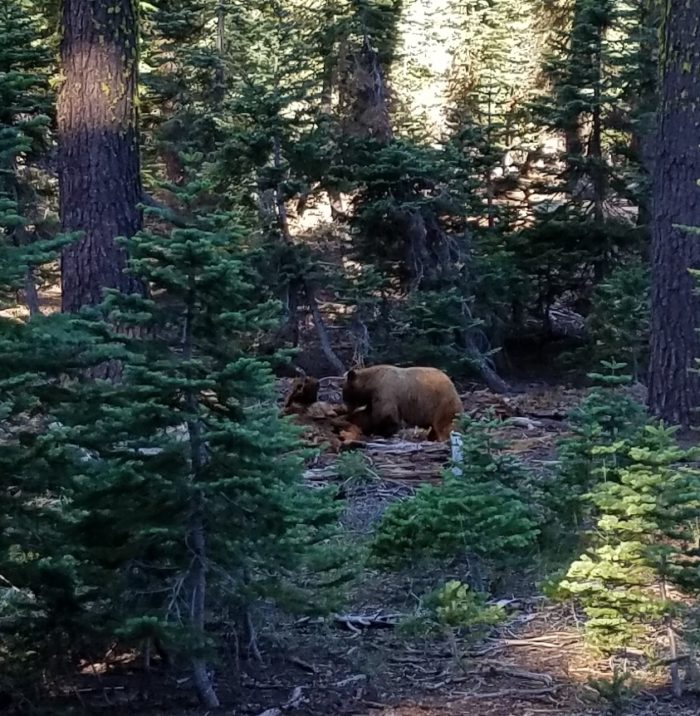 A few miles in, theres a cool geyser, not like Old Faithful, more of a constant gushing of boiling water out of a hillside.

A mile later the trail wound down past a boiling lake.  Of course it smelled like farts, but it was still neat. 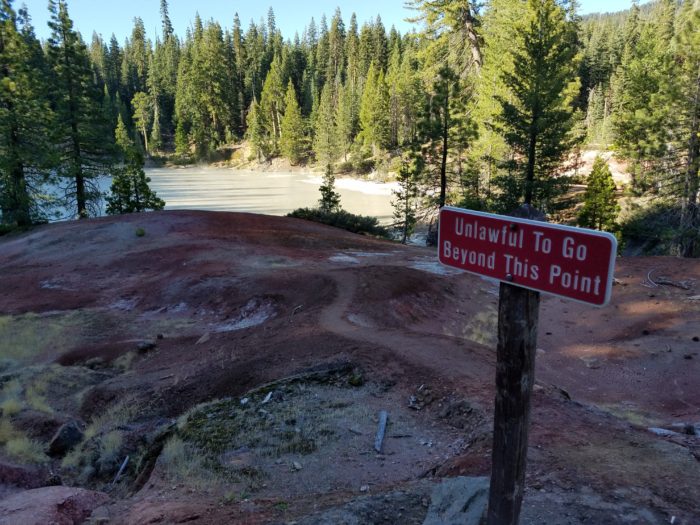 Coming out of the park, I got some real Trail Magic. There was a container with candy, bottled water, whiskey, deodorant a bag of condoms.  Basically thruhiker date night right there.  Fuelled by Sour Patch Kids and alcohol I pushed two more miles down to Hat Creek where there was a big hiker campsite. 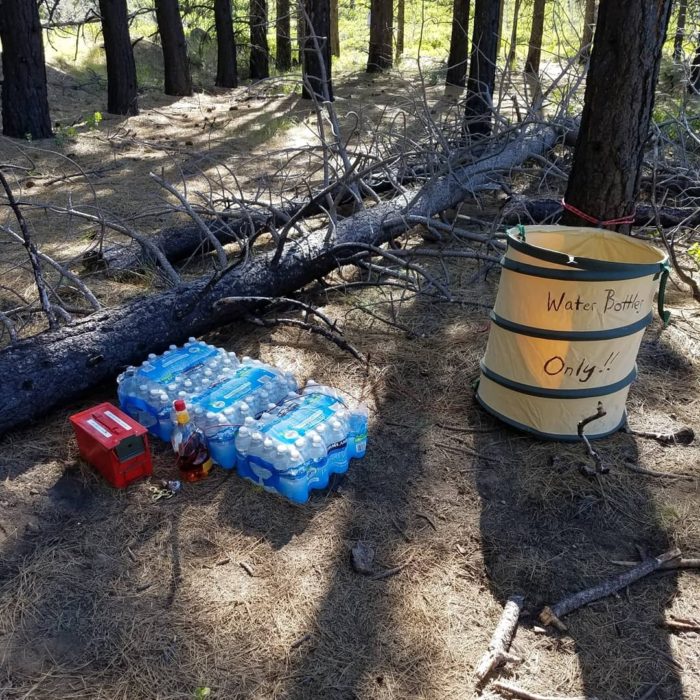 This section of the trail wound through this beautiful open pine forest with a carpet of grass on the ground. Visibility was great, and the footbed was in great shape. I managed to do almost 3 miles an hour for the final eight miles into Old Station the next morning.

I got to JJs Cafe by about 9 in the morning, just in time for second breakfast. I had a great vegetarian hash scramble, and followed it up with a Nutella milkshake for dessert. Lots of hikers were rolling in, getting food, taking showers, and watching the World Cup on their phones. Plus, nobody wanted to get going since the Hat Creek Rim is known to be a hot and dry section with a long water carry. It’s significant enough that there was even fear-mongering about it miles before.

But the trail does not hike itself, so I left at around noon. Nearby is a lava tube called Subway cave, which is an attraction managed by the Forest Service. I checked that out, and got water. Faceplant and I went full hiker trash mode, stripping down and soaking our shirts at the water spigot in the picnic area. 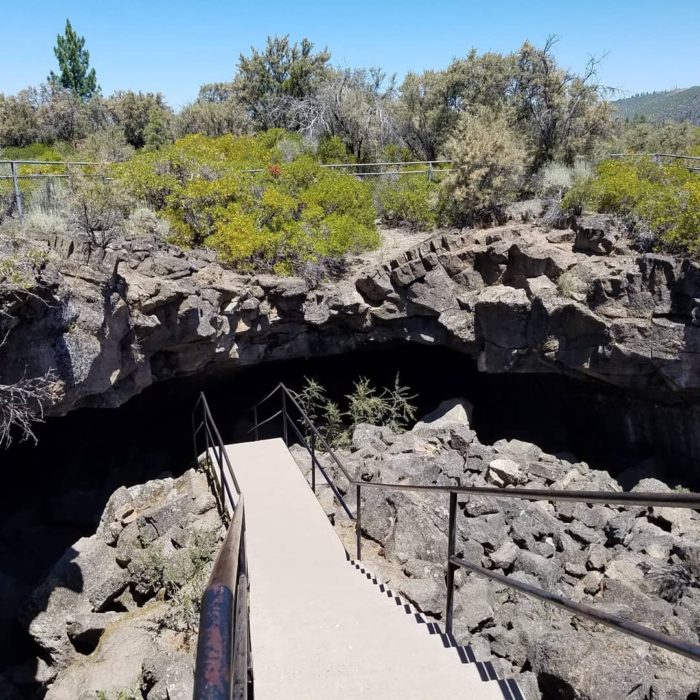 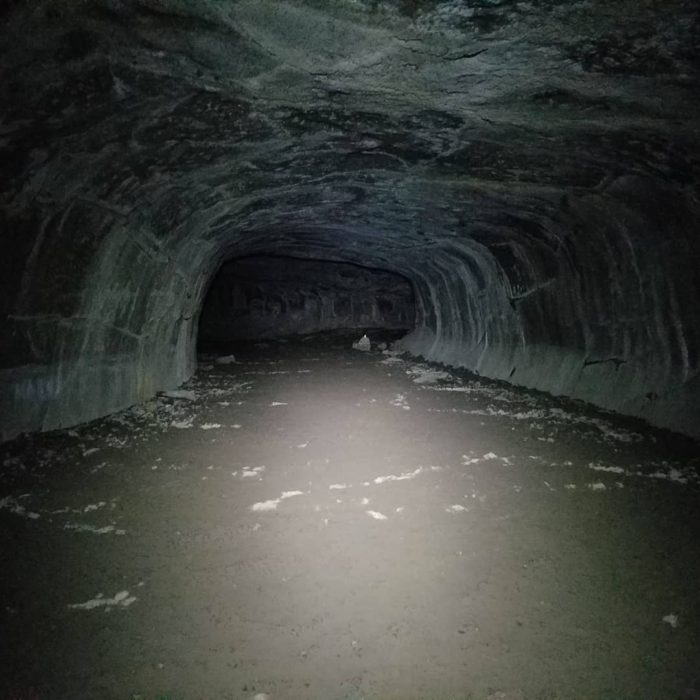 After all the hoopla about this stretch, I have to say that Hat Creek Rim was the hidden jewel of the NorCal section. After days of living in green tunnels, we were back in the desert. Once you make the climb up the canyon wall, you are treated to incredible views of both Mount Lassen and Mount Shasta, far off to the north. Yes, it’s hot,  but there is enough shade if you need it. Also, since I still have my Chrome Dome, I walked most of the day in my own shade. I think it made a real difference. It’s probably the only way I could keep up with Faceplant. 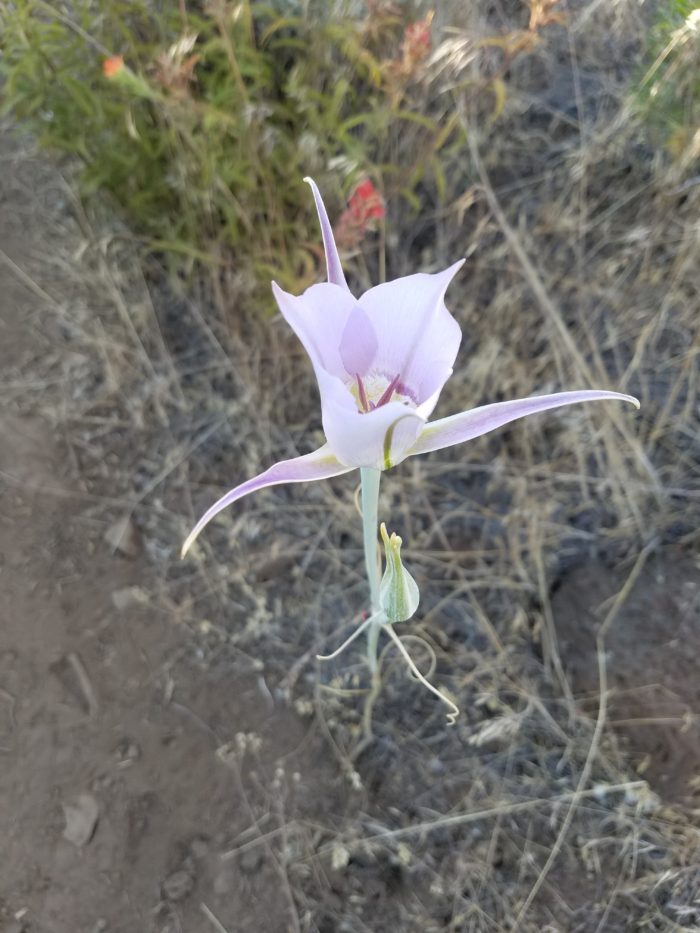 Eight miles in, there is an off trail spring, the only water for the next 21 miles. The guy who maintains the trail also maintains a water cache 5 or so miles later, but he asks that you tank up at the spring in order to lessen the load on the cash. Being respectful, Faceplant and I did the 1/3 mile trip down the canyon to the spring and filled up there. Afterwards we hiked on to a radio tower installation, where we knew there would be flat spots to camp. 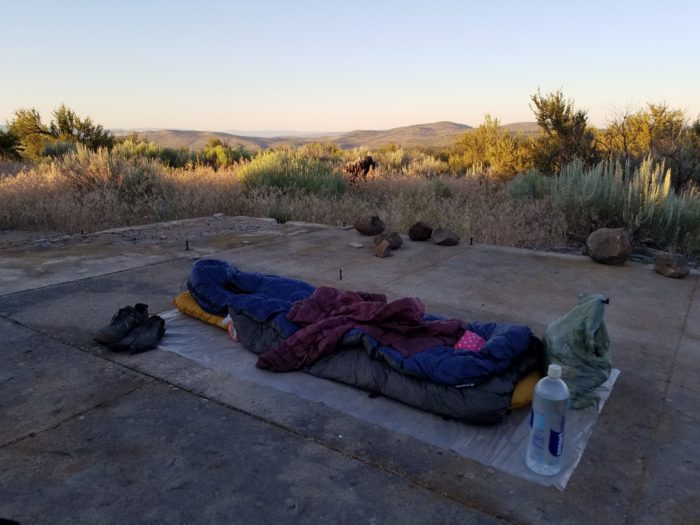 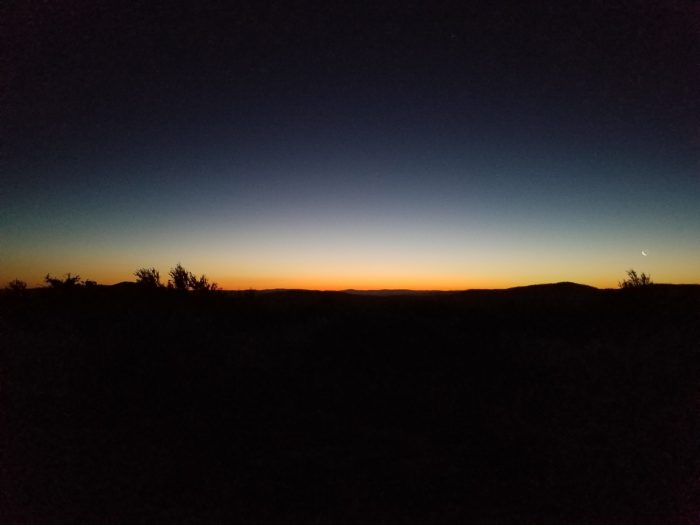 It was nice to cowboy camp again since the elevation and the dry environment meant that they were almost no bugs.  What we didn’t know is that there was an active mountain lion in the area. The next morning, we ran into some hikers, Stripes, Karma, and a woman named Kwa. She told us that as she had night hiked past us, she came face-to-face with a big mountain lion in the trail. It apparently was crouched and ready to attack and circled her while she screamed for help. Stripes and Karma were only about a quarter mile away, so they went running up the trail and their approach scared off the cat.

Walking through the grassy plains on the downhill side of the rim was like being in the desert again. With Shasta looming on the northern horizon, the whole thing felt like being on the Serengeti.  I saw a dragonfly whizzing through a cloud of mosquitoes, and heard the clicking as it ate them.  The whole day was pretty wild.

And we crossed another milestone.

After laughing most of the day at the fear-mongering and the weather, we started baking in the heat as we made our way down to lower elevations where the humidity was higher. The last few miles were downright sultry. But again, nothing that a Rhode Island boy hadn’t seen or dealt with before.  If you have ever spent the day doing yard work in August, then you can deal with this heat too. Still, hot.

Both Faceplant and I had decided to take a zero day here in Burney. Knowing this, we took it kind of easy and got to the road by 4. It was rumored to be a hard hitch, however the second car that stopped picked us up. It was an injured thru-hiker, his girlfriend, and their brother basically taking a few weeks off for one of them to heal up.  Sweaty and Goofy, their names were. I saw on the dashboard of the truck that it was 97 degrees outside. We joked later that that was why it felt hot outside.

On to the border

With less than 300 miles to the border, it’s been great to have a day off. Kind of the deep breath before the plunge.  The last race. My feet still hurt, but everything feels a little bit better. I’ve even put some weight back on. I think I can only see one rib now.

I’m off to Castella, then Etna, then Seiad Valley…and then Oregon!