Short post, more words than pics this time. There’s really only so many pictures you can take in one day. But it’s time for some contemplation and a day in the life stuff.

I’m at mile 2,572, or another way, just 80 miles to go. There’s a reroute of 21 miles off trail that will net add another four, and it’s nine from the border to actual civilisation (spelled in Canadianese), so 93 walking miles in total.

As Faceplant and I sat in the back of the pickup truck, hitching in, it kind of sunk in. In SoCal getting to and being here was sort of an abstract thing, something that was a matter of math and miles and (hopefully) a consequence of some walking. But now it’s actually here. It’s like when you were little and you were waiting for your birthday. You knew it was coming, in some vague, far distant future.

Tonight we’re at the overflow campground with the crickets and owls on the shore of Lake Chelan. Tomorrow is chores and weather reports and resupply and hiker boxes and maybe a shower. Its day 14 without one for me. Nobody’s complained yet, but I’m starting to feel a bit gross.

There’s also a bakery just outside town, supposedly the best on the whole Trail. That may be because it’s the last one, or that there’s not much else here, or that everyone is starving, but we’ll see. Oh yes. We WILL see. I’m also skosh food and snacks in my resupply box, again, so I’ll need to supplement with some bread or cinnamon rolls. 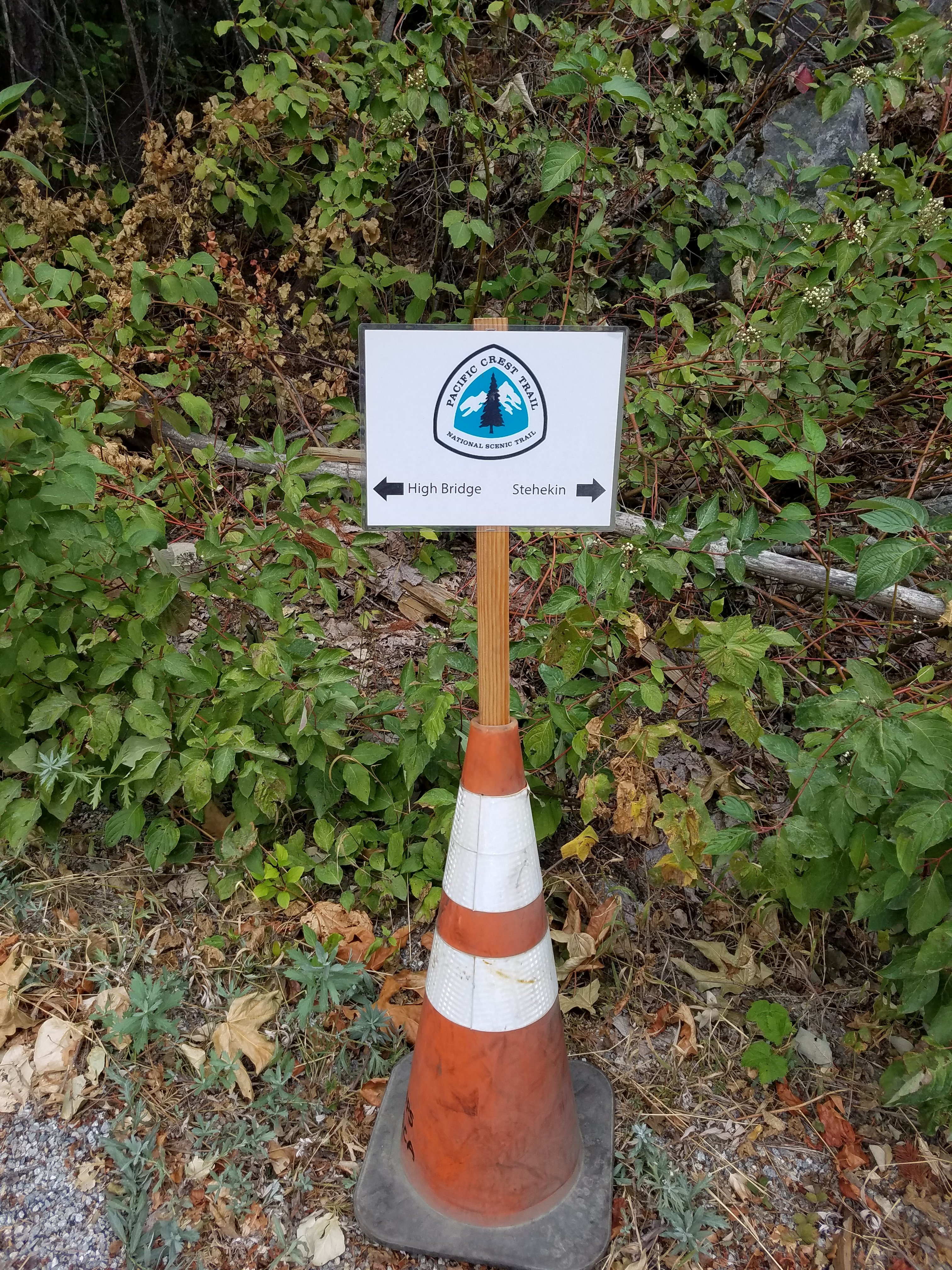 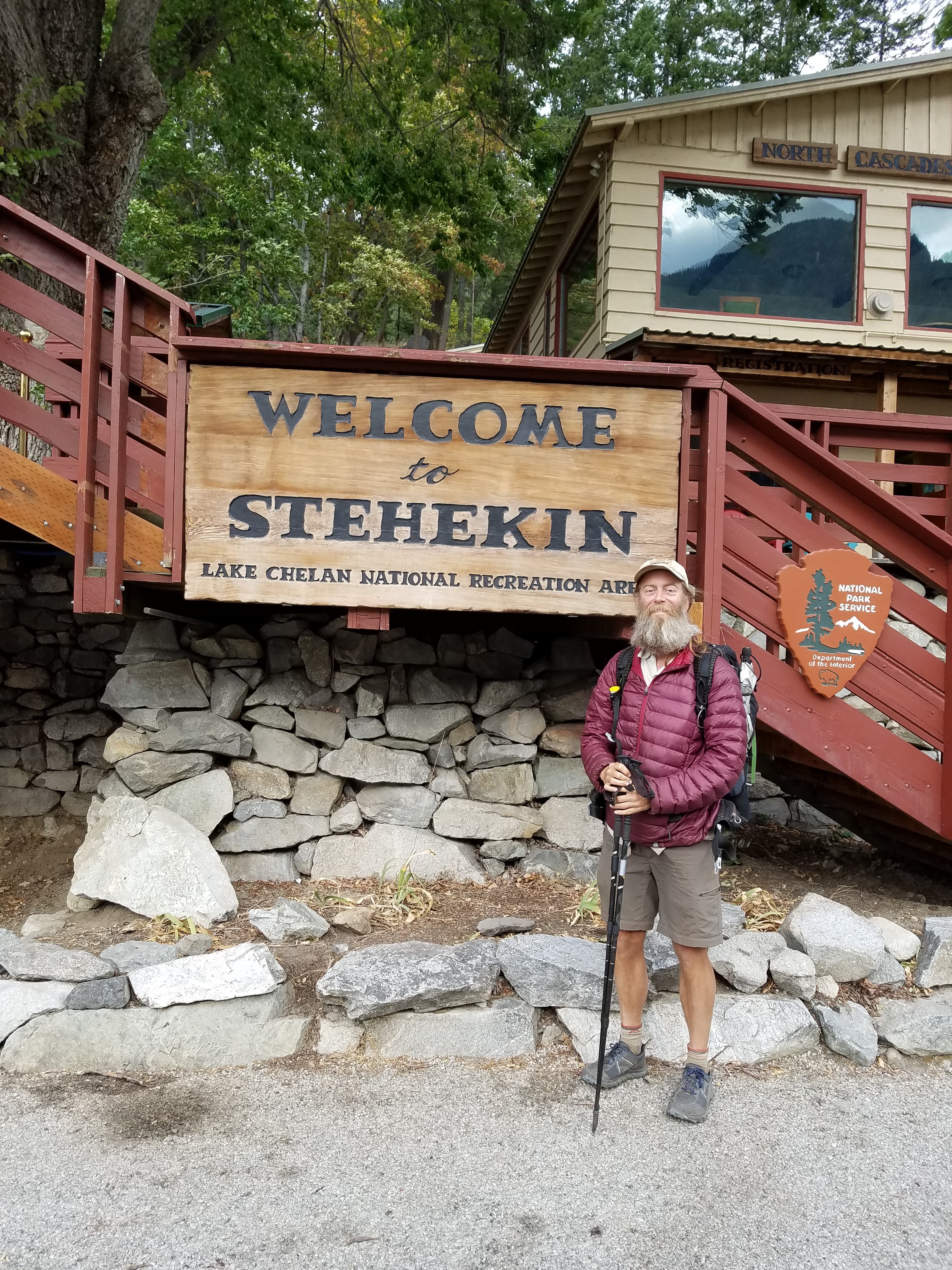 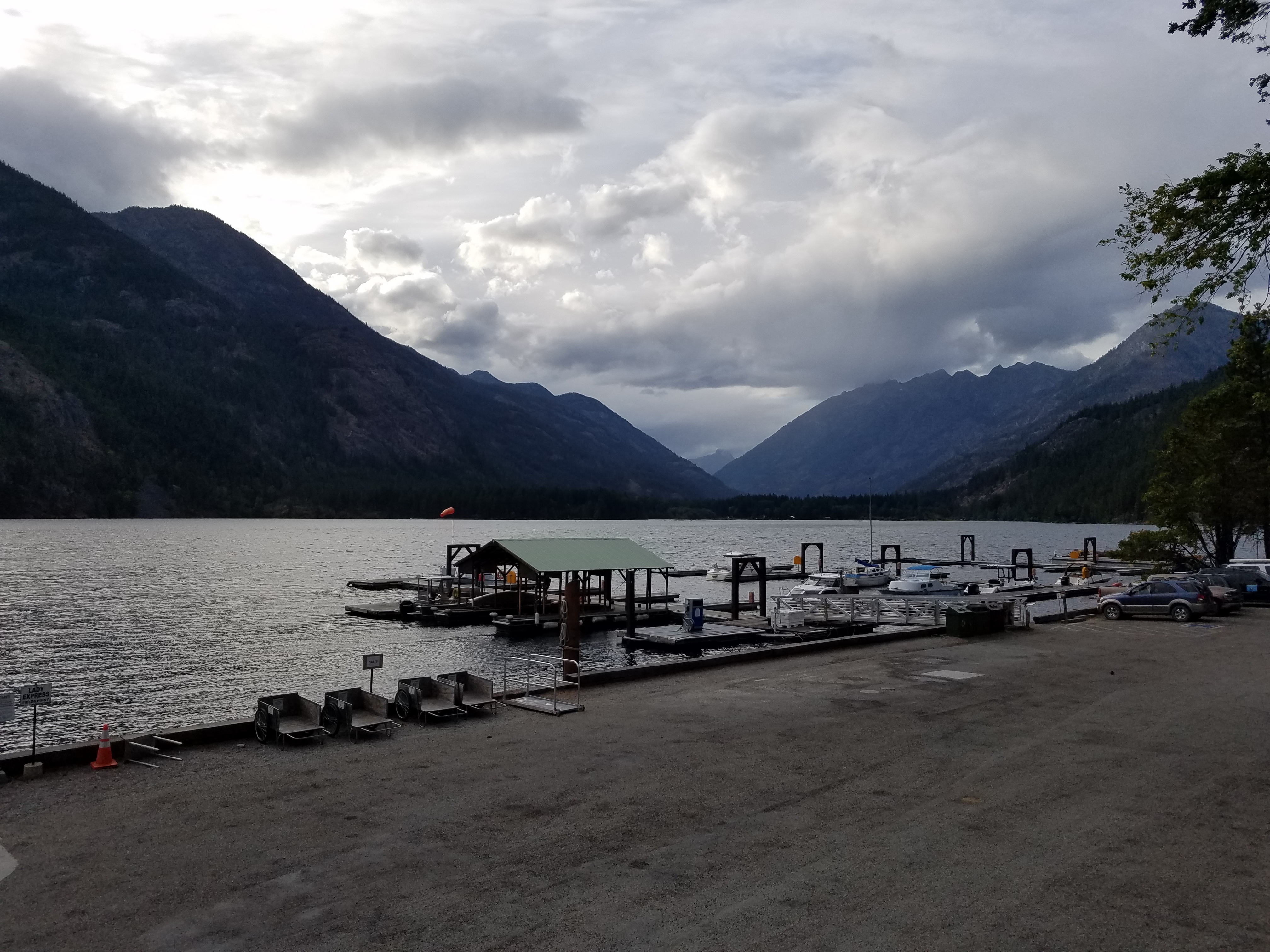 Mentally, end of trail might be coming at the right time. I’ve stopped bothering to clean my cook pot each night, parts of me are stinking in new ways, and I’m sitting here eating for breakfast penne pasta and random sauce someone left in the campground bear box. No idea of how old it is; don’t really care. It smelled OK.

I’d have bought this shirt, but it’s cotton, pink, and the miles are wrong. 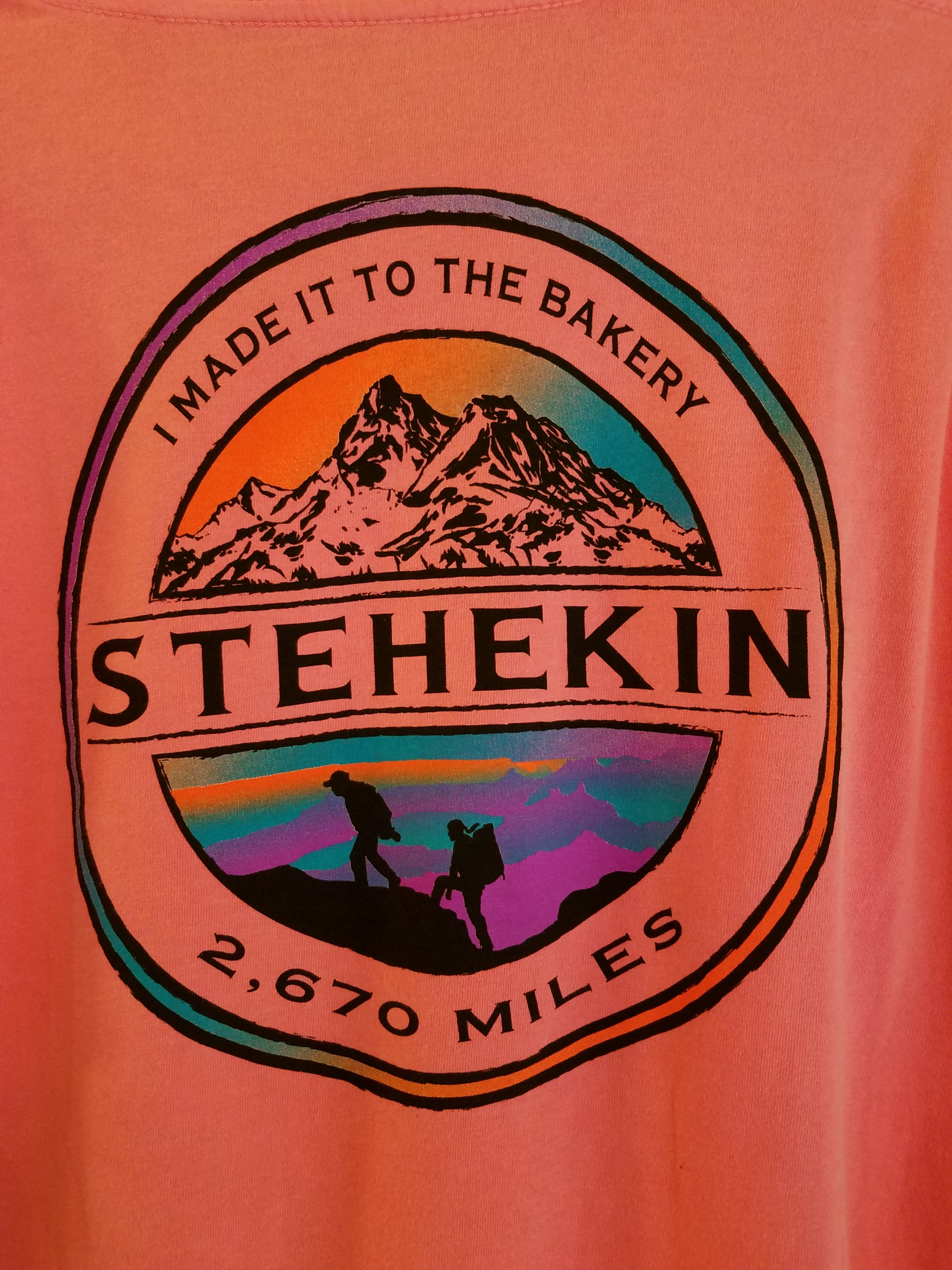 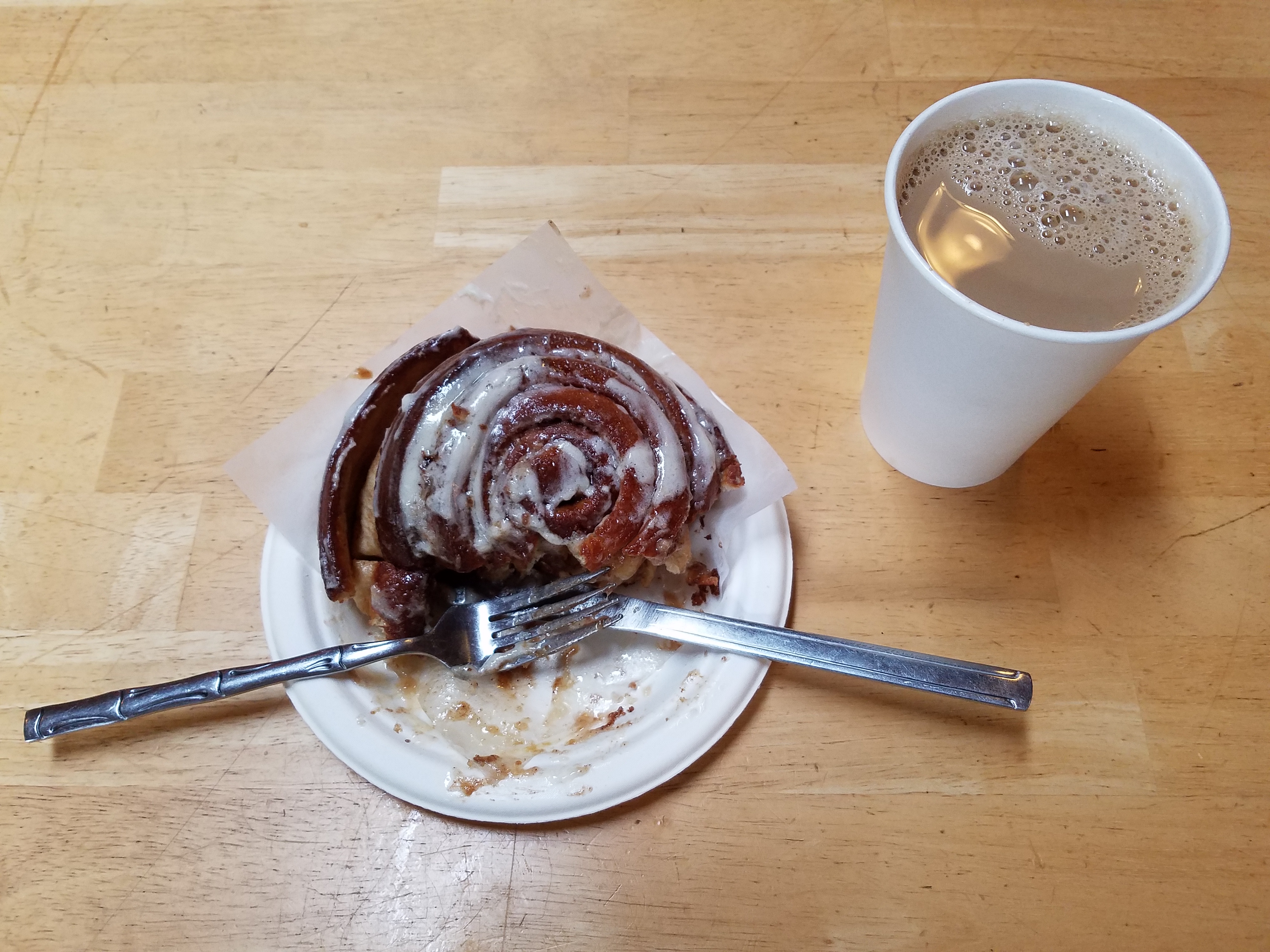 Oh, yes. Cue the Ron Swanson quote: “Let me be clear, I would like all of your cinnamon rolls.” Actually, one was enough. It was beefy. I was not defeated, of course, but it was a worthy adversary.

I hitched out of town in the back of a garbage truck. Totally worth it. The bakery here is awesome; the only thing missing is the woodstove being lit. The building itself is old post and beam wood construction.

And the coffee is not gross. A welcome change.

Boy, it’s good to sit in a warm room, on a real chair, and eat real food with clean hands.

Here There be Dragons

Stehekin is a funky little place. One of those edge-of-the-map kinds of places. Lots of fishermen, there are a few pricey lodges, and plenty of non-active tourists who come up the lake on the ferry for the day. People just enjoying the quiet, I guess. And the casually gorgeous scenery, of course.

The one negative is the surprising number of yellowjackets. Sit anywhere, open up any kind of food, and they’re up in your business. For fuck’s sake, guys, it’s September. Go hibernate or something.

Hiker trash everywhere. Smiley Face and I had a food bag yard sale outside the PO, while Bigfeet circled, looking for extra food. He messed up his ankle or calf and is now looking at six to seven days to Canada vs. the traditional four-plus.

New hiker trash level reached! Washed/rinsed my hair in the laundry room sink. Still no soap, and nothing else got washed, though. Fourteen days. I think it will end up being 20.

Creepy – someone just came by asking if we knew a 70-year-old man on the trail who hadn’t checked in with his family in four days. Annoyingly, they had no definite info about him, so we really couldn’t help. I couldn’t help thinking, what if that’s Thumper? I hope he didn’t fall in any of that sketchy stuff. 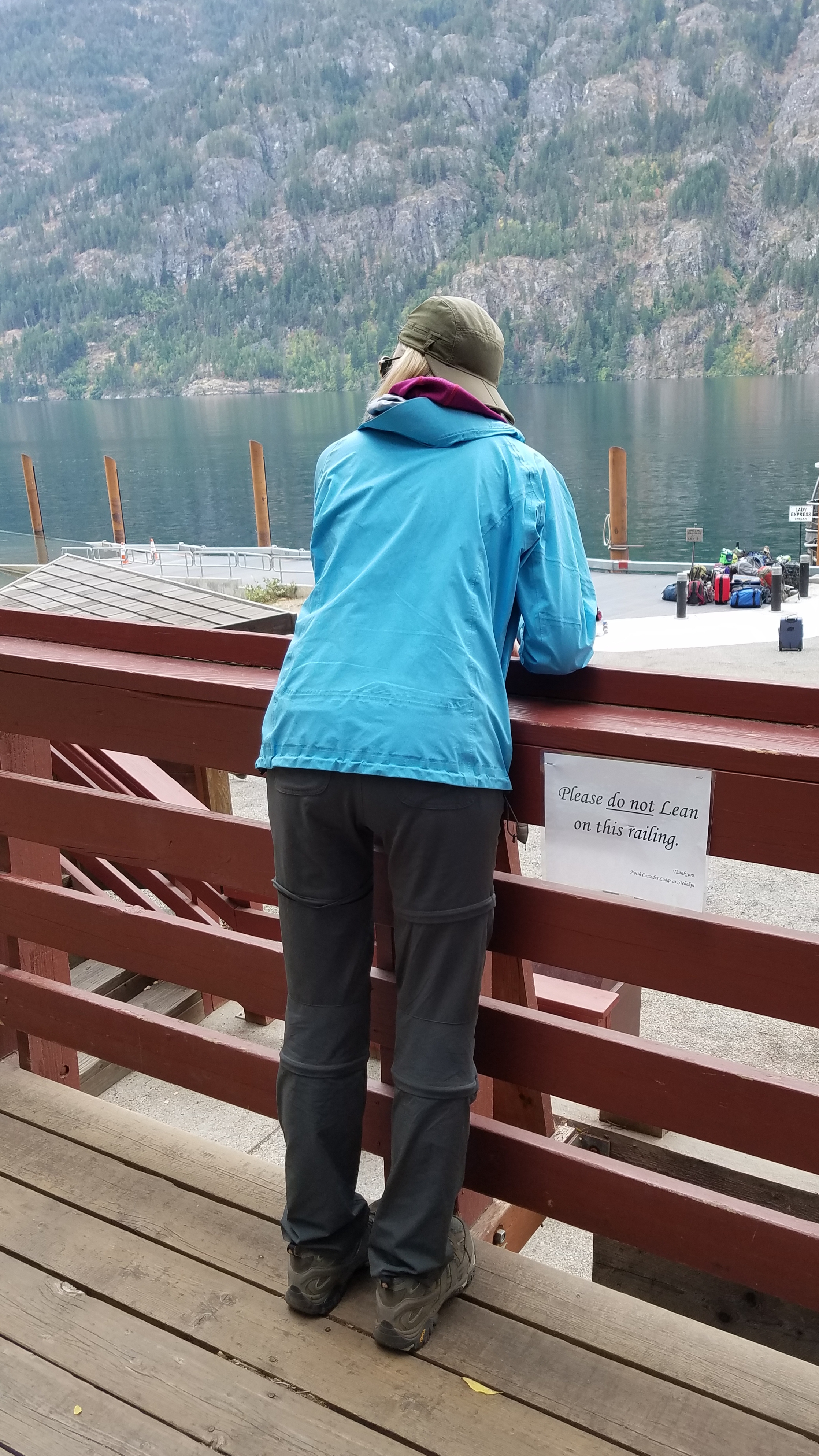 Faceplant got us permits to camp down by the river (not in a van). Tomorrow morning we’re doing the 6.5 mile road walk on the detour to a place called High Bridge, where we get back on the PCT for 50 miles. And then something else is on fire, so we’re down in the valley again, rerouted. On the way out of town we hitched to the bakery again, this time for carrot cake and more coffee, and packed out a sandwich for dinner.

We’ll camp 14 miles back onto the PCT; the ranger who issued the permit warned Faceplant, “You know with the roadwalk, that will be 20 miles.”

The weather is definitely turning. Fifty miles ahead, at Harts Pass, they’re calling for highs in the 40s, and some snow. But what can you do? Hike. Because that’s what you always do.

At the bakery we hung out with some other hikers, Cardboard and Megan, also two guys who are, together, a unit called the Boy Scouts.

Early night. It’s not yet 6 p.m., and the tents are up. Good zero, my feet feel pretty good, and my muscles are refilled with cinnamon-flavored glycogen.