Everyone gets a well-earned round of applause from the hiker trash inhabiting the deck of the general store. Even at 9 a.m. After all, it’s been 702 miles, more or less. One quarter of the trail completed, and this is the ceremonial, if not actual, end of the desert. 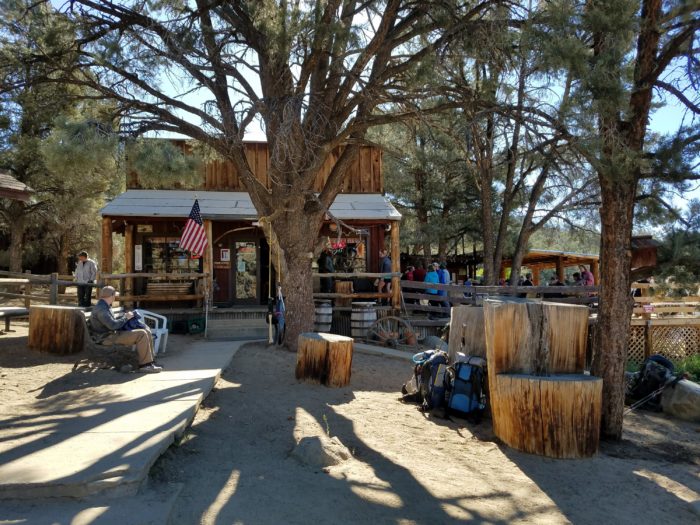 Nobody was really looking forward to leaving Lake Isabella, as we immediately had to do a long, hot grind out of Walker Pass. 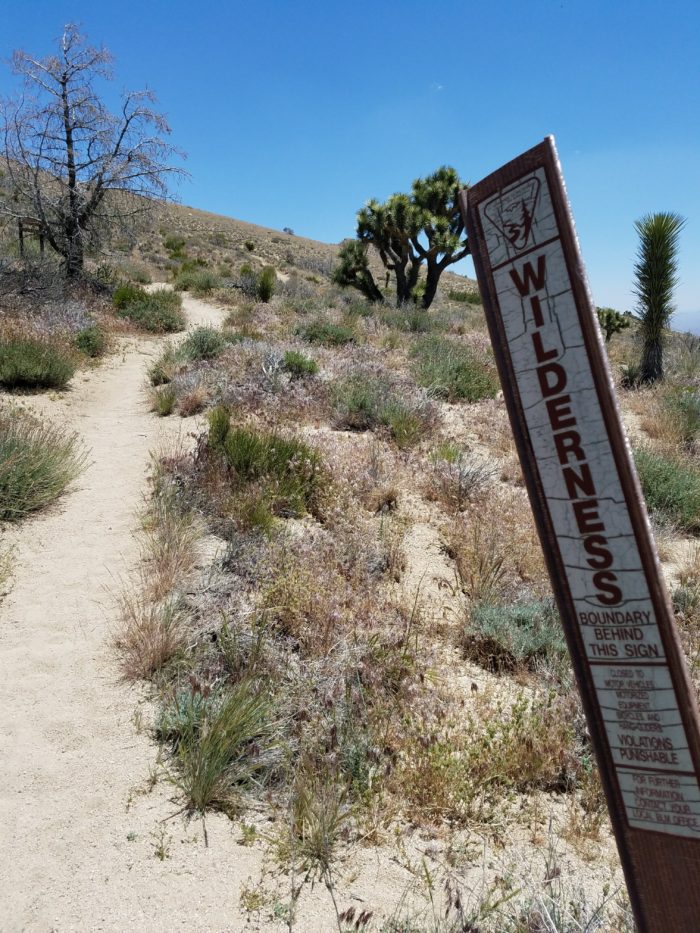 Half the group got a hitch from the local sheriff. And not via the jail, either. 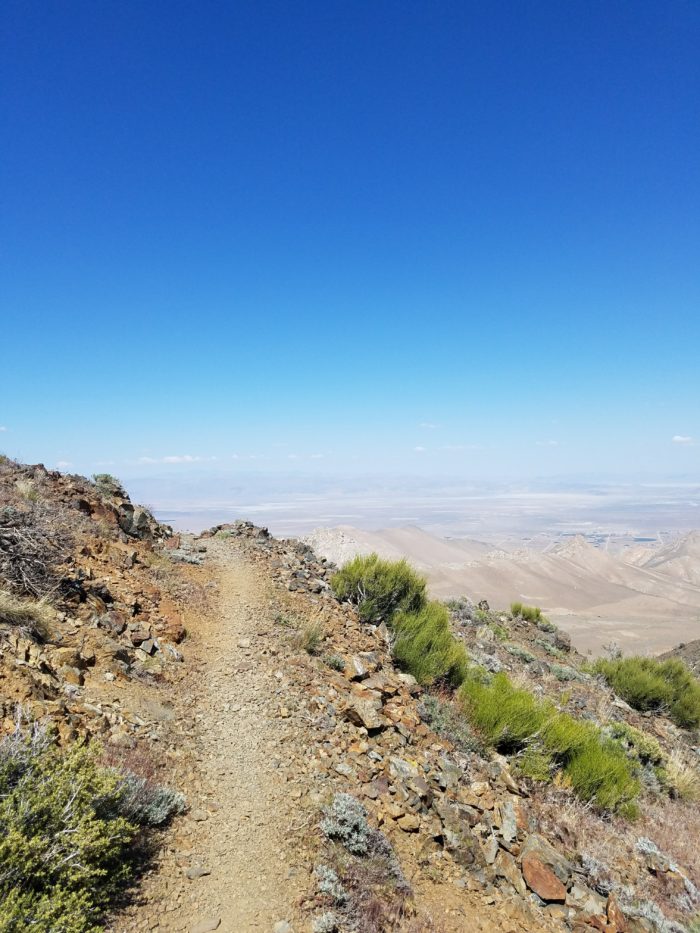 It was a beautiful climb, and after the first two hours the temperature dropped nicely. 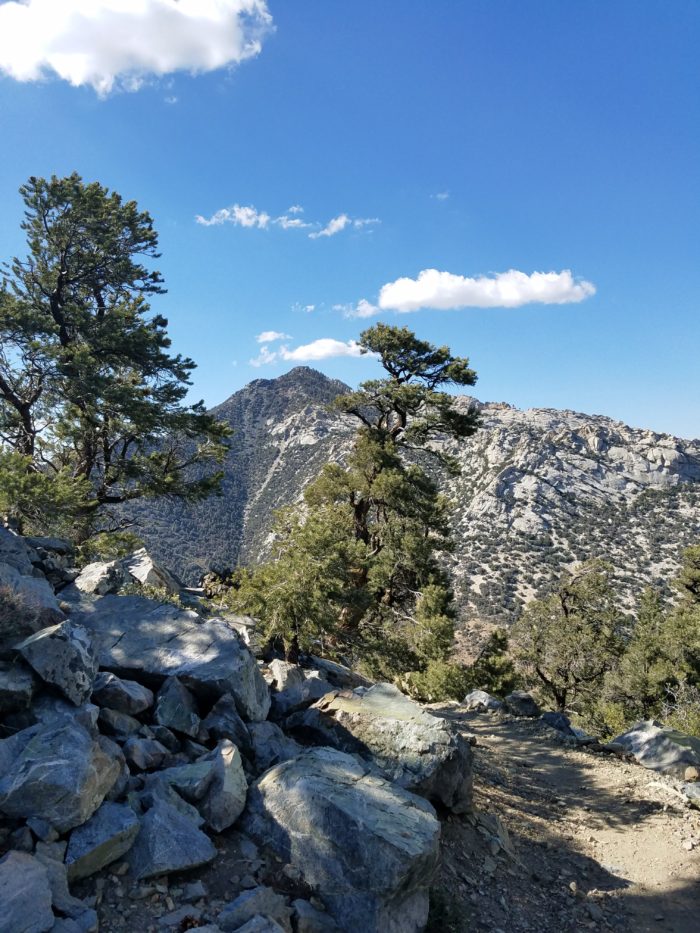 You can really see the change in geography and geology. Later in the day I caught up with Scooch right near the one-quarter mark. 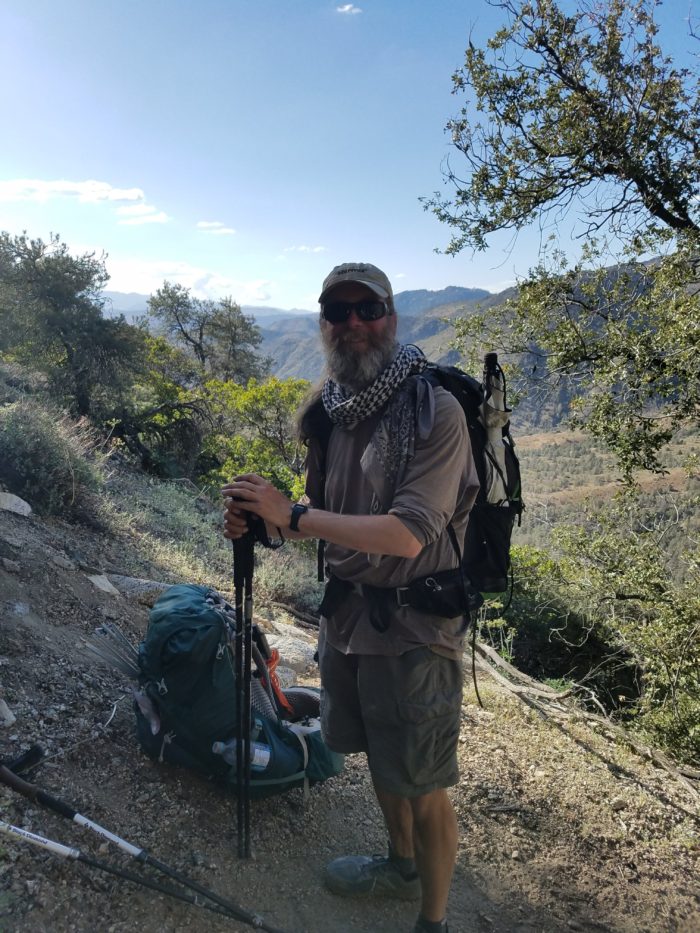 Since I am the old, slow guy, she quickly accelerated into the distance and I did the rest of the day alone. It’s a good thing I had enough water, as the Joshua Tree Spring is full of uranium. I have heard that all the springs and streams up in the mountains are tainted, and it’s probably safe given the small amounts. However, I didn’t feel the chance of getting super powers was worth the risk. As a general rule, none of the water is safe to drink untreated anyway. 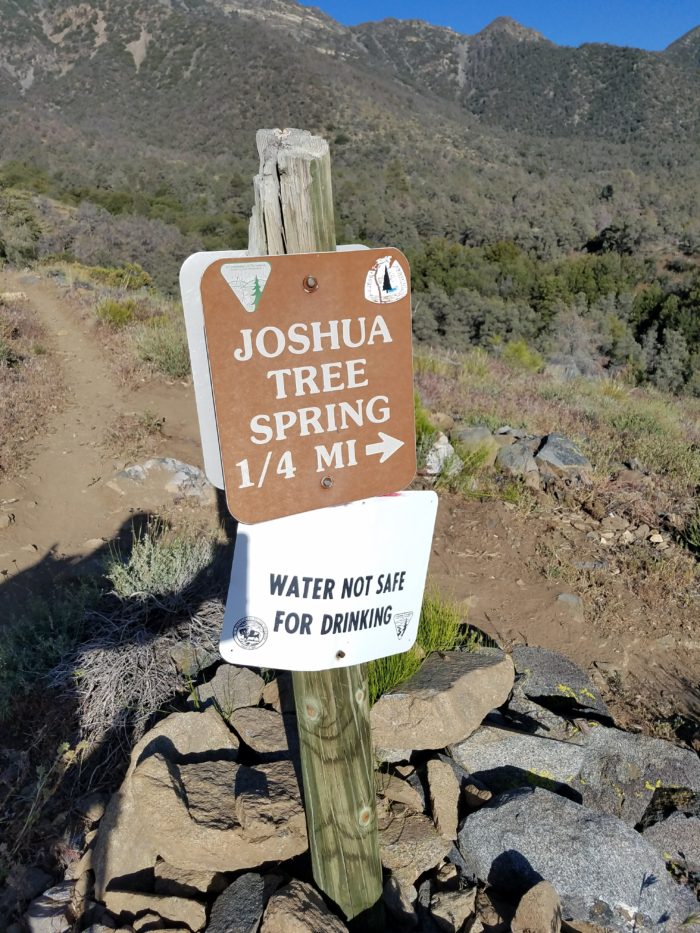 It was only half a day, so we only did 13 miles to a cowboy campsite on a ridge. The next day was only slightly longer, 16 miles to a backcountry campground.

We’ve been kind of pumping the brakes, as there have been reports of recent and heavy snowfalls in the southern mountains. While not too much more dangerous than normal, it makes the going very slow and tiresome, and generally just sucks. When the snow is heavy you can spend a whole day and do only five miles. There is some math involved, but often if you wait a day or two, you can end up doing the same miles in the same number of days.

What’s frustrating is the endless supply of unsolicited advice telling you that you are doomed to fail if you head up into the mountains now. It seems to be some kind of contest for who can tell the scariest stories or have the most dire predictions.

The nice thing about Memorial Day weekend is the larger number of day and weekend hikers out there. Also, we were treated to trail magic by a guy named NoHawk, who had thru-hiked the PCT in 1977. It was a little different back then, he said. 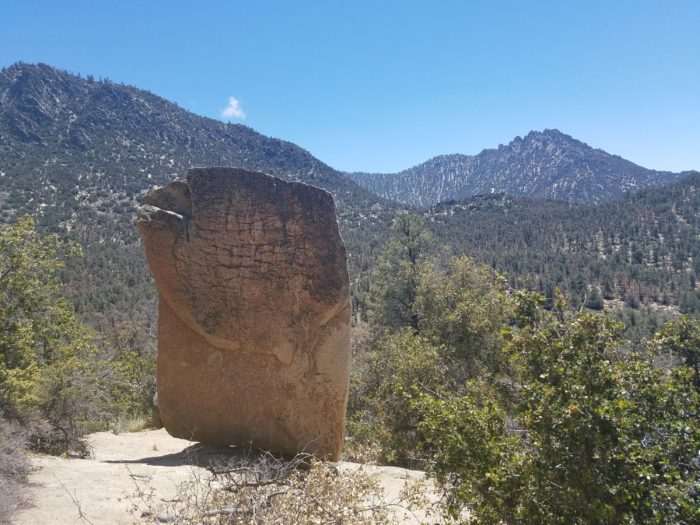 Our last day in the desert started off with a long, gentle climb past an old rusty mill up to about 8,000 feet. I managed to catch up to the group at the height of land, where we all took a nice break. The rest of the day I spent hiking with Cherry Bomb. It was great to hike with someone for a change, and I think both my spirits and mileage improved dramatically. We came down to a broad, stony valley where the south fork of the Kern River made its way across the floor.

After lunch, everyone took off and I was again the caboose. Walking along the Kern seeing the wildlife and the trees and the rocks change as we finally got out of the desert was beautiful. 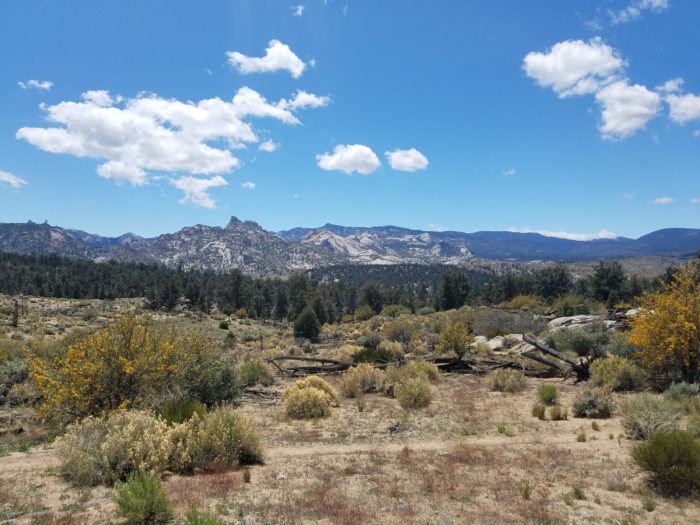 Seven hundred miles feels both very far, and also just a drop in the bucket. But it’s over one quarter of the way and we are almost in our third calendar month of hiking. Sometimes it feels like you make no progress, but the numbers don’t lie. I am feeling better lately, eating more, and trying to make an effort to enjoy myself more. This is not a march-or-die situation, after all. It’s a vacation. Or an adventure, even. 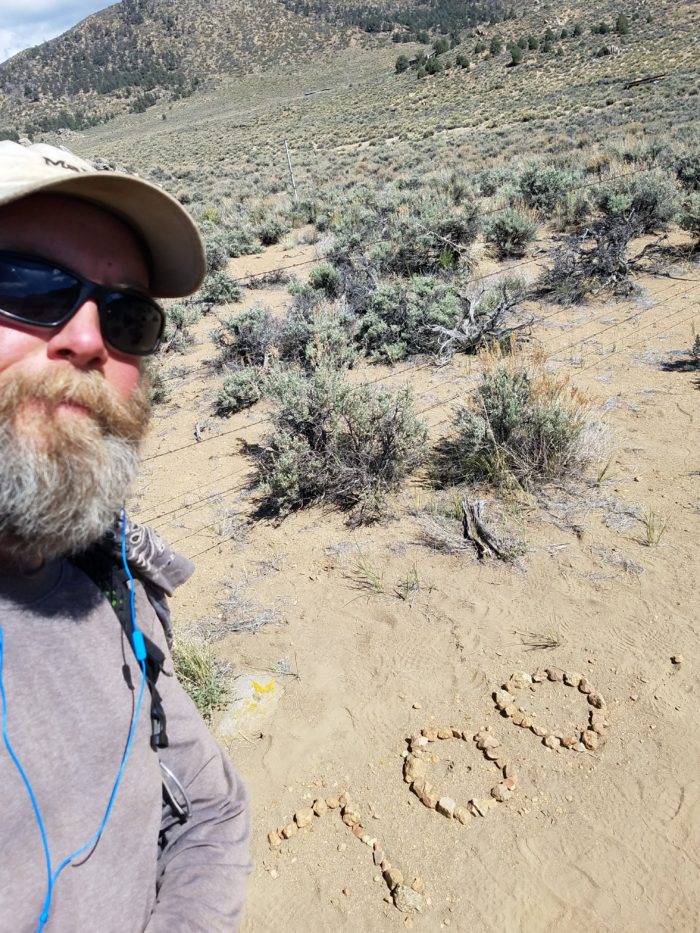 The last few miles of a 20-plus mile day are always the hardest. Your feet are telling you, or begging you, to please stop. You’re thirsty, it’s probably dinner time, and you’ve been carrying your pack all day. But with the end in sight I got somewhat of a second wind and made it to the road by about 4:30. 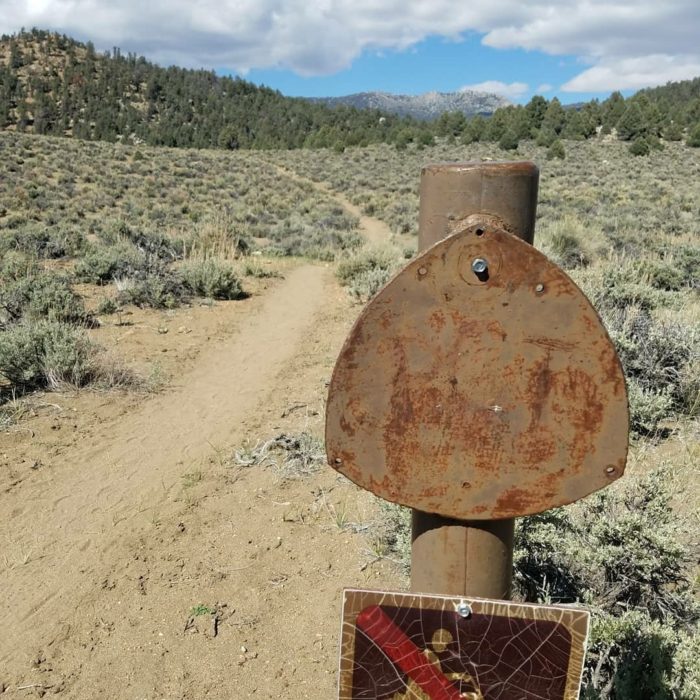 Cy, Surge. and I made short work of the 0.7 mile road walk to the store. I quickly filled up on ice cream and got my packages. Almost everything arrived safely except for a bag of Fritos that had exploded in the box. A nice bonus was a second package containing a pound and a half of macadamia nuts. These are basically pure fat, and worth their weight in gold to hikers. One ounce, or about seven nuts, has as many calories as a Snickers bar.

The folks who run the general store provide laundry, showers, flaky internet, camping, a bonfire, and movie night on an amphitheater screen. It was nice to sit back, watch a movie, and not think about hiking or feet or calories or miles for a few hours. Also, most of the people were stoned. 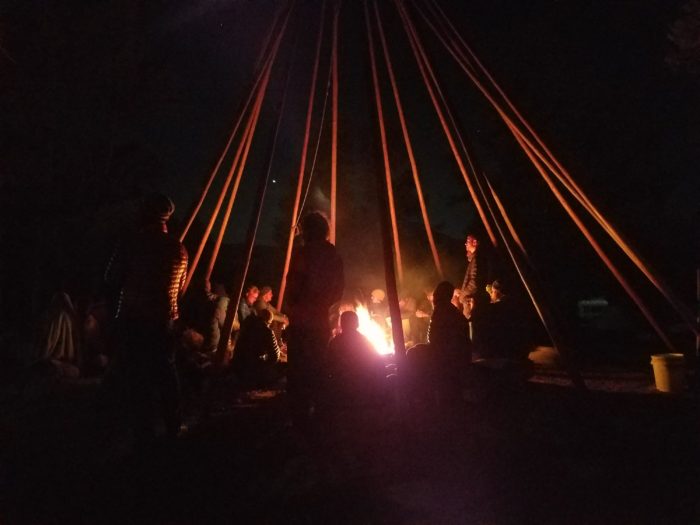 There’s a number of resident dogs too. 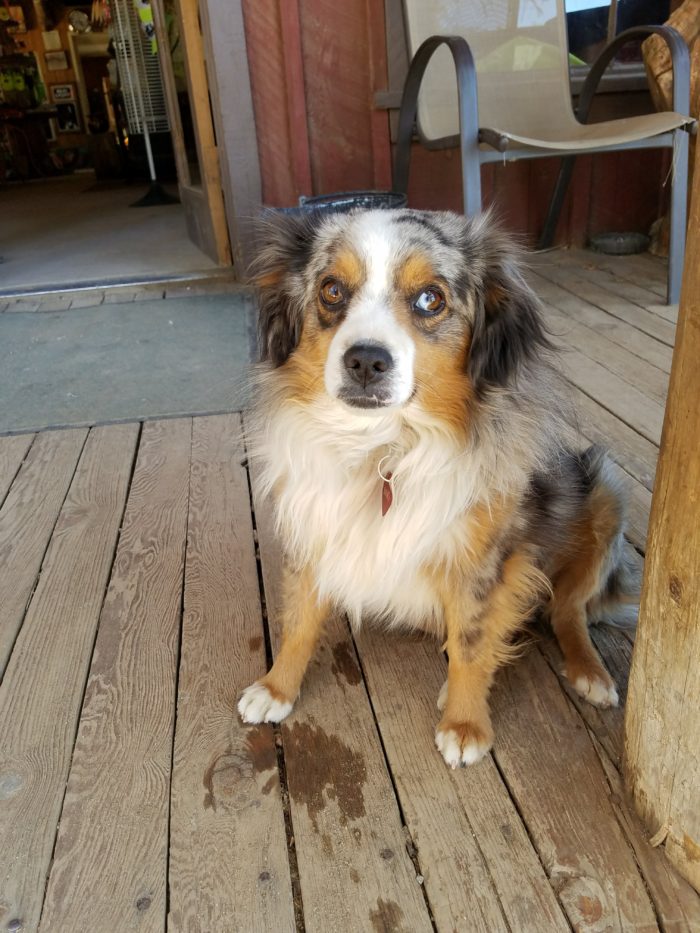 Today will be a two-mile nero. A few of us need to get to the outfitter, run by famous Triple Crowner Yogi. We also need to sort out some of our food that refuses to fit in the bear cans. Cans are mandatory starting in about 40 miles. It’s legitimate bear country up here. We’ll do a short hike to another campground a few miles up, then tomorrow the real elevation games again. Fortunately, the slope never seems to exceed around 400 to 500 feet per mile, but when you’re going between 11,000 and 13000 feet, it’s still pretty grueling. I’m completely excited.

There’s a chance we will get off the trail at a place called Cottonwood Pass, as there are reports of lingering heavy snow higher up. If we do get off, it will be several hitches or bus rides north, then hiking back south to meet in the middle. Then getting  back north to the point where we started and continuing.

I really don’t want to do this. Part of me wants to just do the whole thing in one shot, and the other part of me does not want to believe that the snow is that bad. We will see. You can’t enjoy hiking the PCT if you are dead.