Book One, Chapter Three: Shelter From the Storm in Big Bear

Getting back on the trail from Idyllwild is always a bit of a challenge. There are at least three ways out of town that connect to different points on PCT. Depending on your level of trail purity, where you are staying in Idyllwild, and what you feel like doing, one of the trails is right for you. Last year I took the Devil’s Slide Trail up at the top of town back to the PCT at mile 180.

This year, to mix things up, I took the Deer Springs Trail back up to my 183. From there you do some of the PCT and then take another trail up toward the top of the mountain. By about 9,000 feet, I could really feel the altitude. It was as if I missed one breath in ten. By 10,000 feet, that number had gone up to somewhere to between two and three.  From https://www.wildsafe.org/resources/outdoor-safety-101/altitude-safety-101/high-altitude-oxygen-levels/ 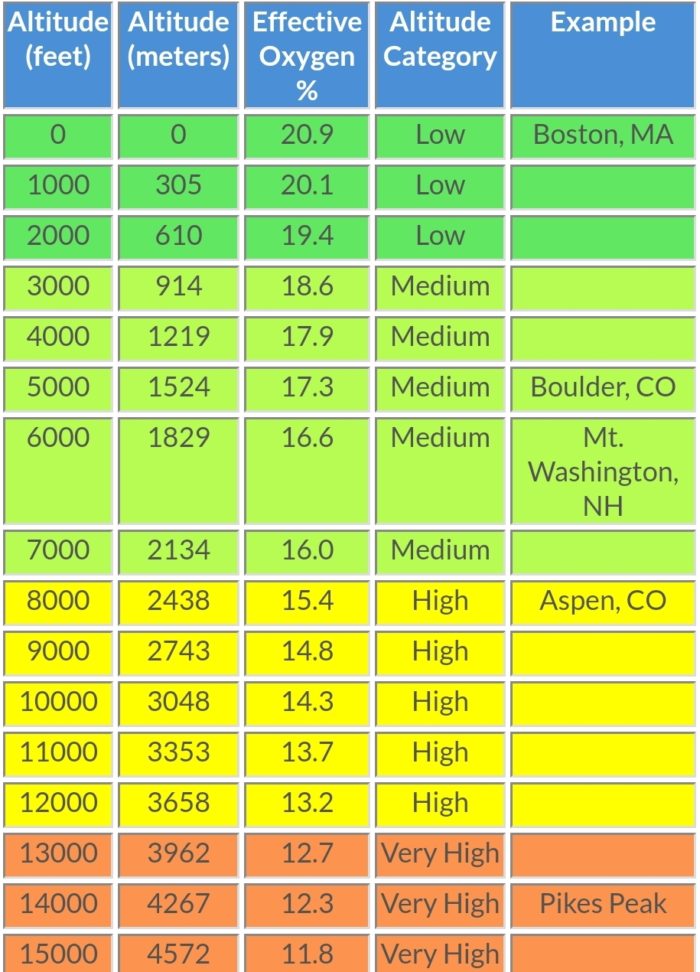 I think that because it was not a weekend, there was no one on the summit, which I had to myself for about five or six minutes until Gandalf the Blond and Jose reached the top with me. After a bit of food, a break, and obligatory photos, I began the long, switchback-ridden descent, including running the gauntlet between some very angry and very close pricker bushes. I dug in all day because I thought the rest of the gang was ahead of me. I reached the end of Fuller Ridge, talked to a few people, and realized they had been behind me all day. But all in all, a great day. I knocked down about eight trail miles but also about eight off-trail miles and did a 5,000-foot ascent up into some pretty thin air.  I capped it off with some cowboy camping under giant pines. 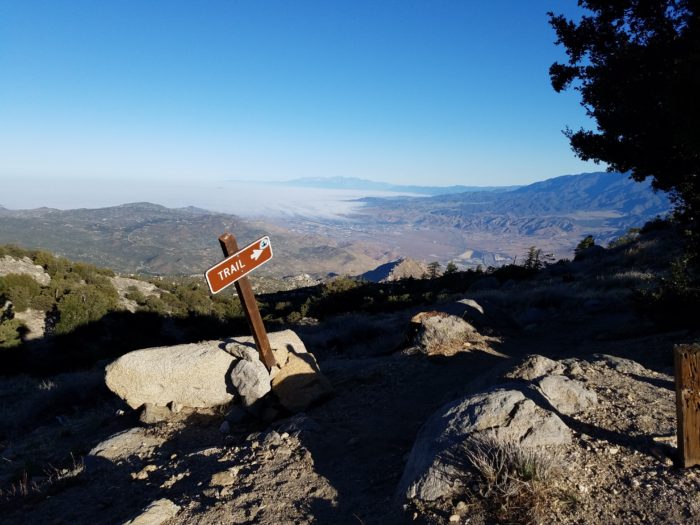 Day two featured the famous San Jacinto switchbacks. From the top of San Jacinto to the bottom you lose about 9,000 feet. Much of this is a series of long Escher-painting-like switchbacks. I caught up to Skinny Dip at about mile 195 and let her set the pace. 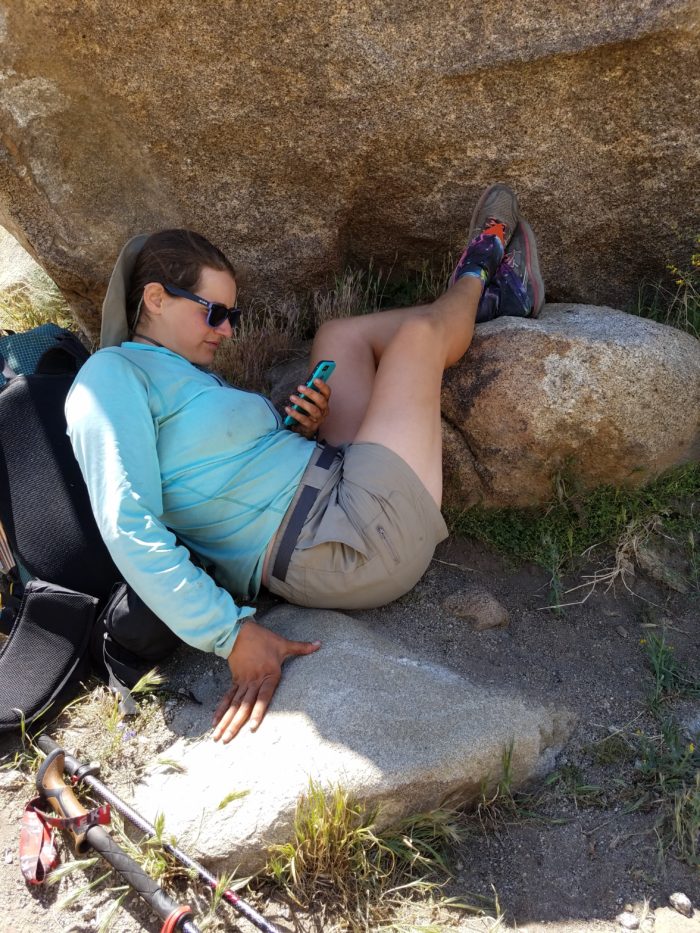 Skinny Dip hiding from the sun.

We did our victory dance at mile 200 and pushed on toward the infamous bees nest. Wrapped and sweating in our rain gear, we managed to get through with only one sting. Skinny Dip took one for the team. At the bottom of the mountain there is a small community that provides a water fountain for hikers.  There, many of us rested multiple hours in whatever shade we could find or create. An older hiker had herniated a disc on the way down the mountain and was unable to walk the last few miles. Alex went back up for him and carried his pack. While we made him comfortable, Eva gave him an exam and called an Uber ride for him to get to the airport and home. It was really great to see how people gathered together to help this guy out. 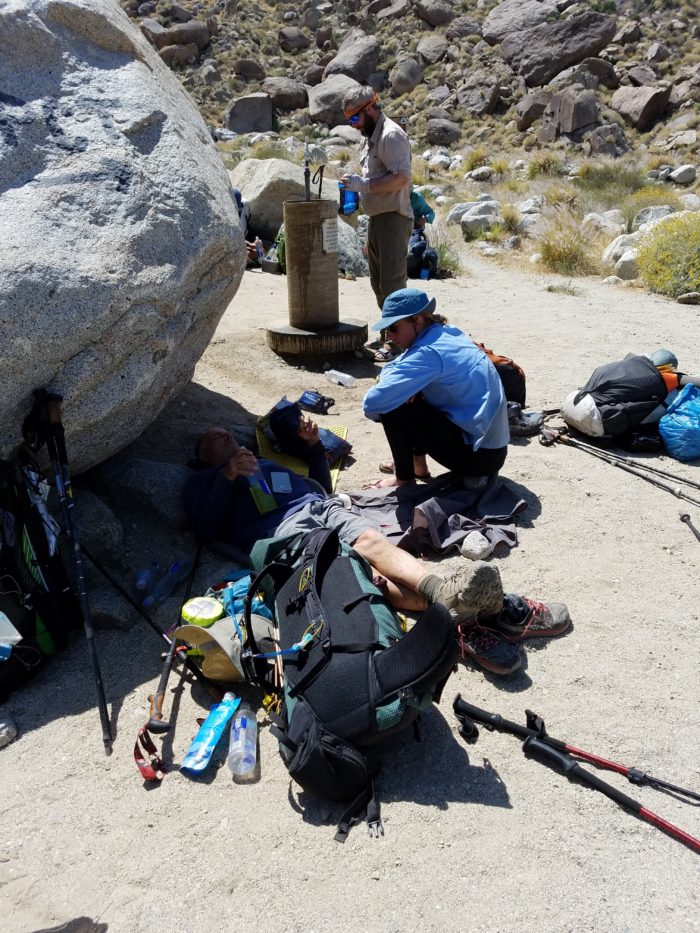 After 5 we pushed on toward the I-10 bridge, where mercifully a guy named DNA maintains a magic cache. 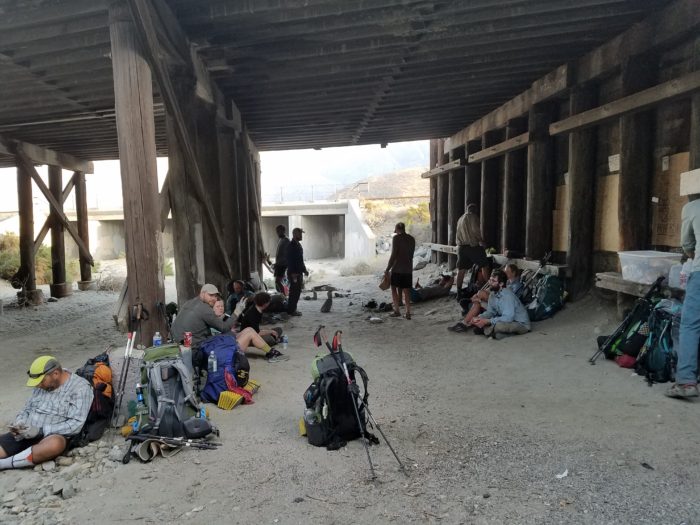 After some couscous and root beer I was recharged enough to push another three miles to the wind farm. It was pretty neat hiking under a nearly full moon, and I did not need a headlamp. 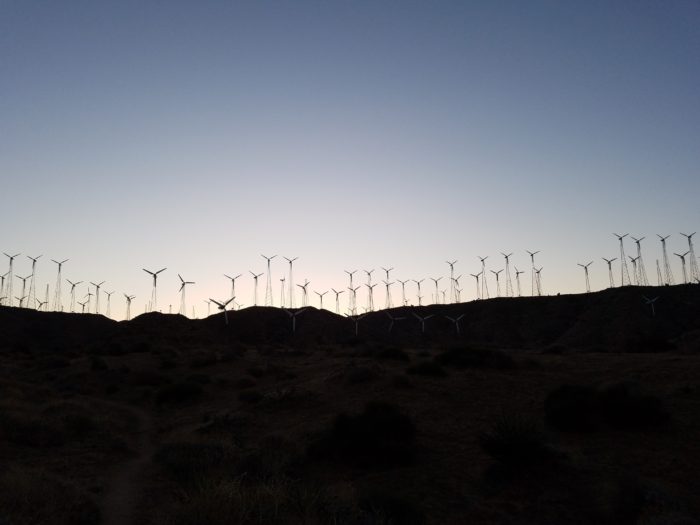 Day three found me crossing over into the San Gorgonio Wilderness and the Whitewater Creek Canyon. I met Larry from 2017 and she hiked with me for the next ten miles or so. She also brought potato chips, grapes, cookies, and, of course, beer. It was great to reconnect and hear her experiences up north from last year. 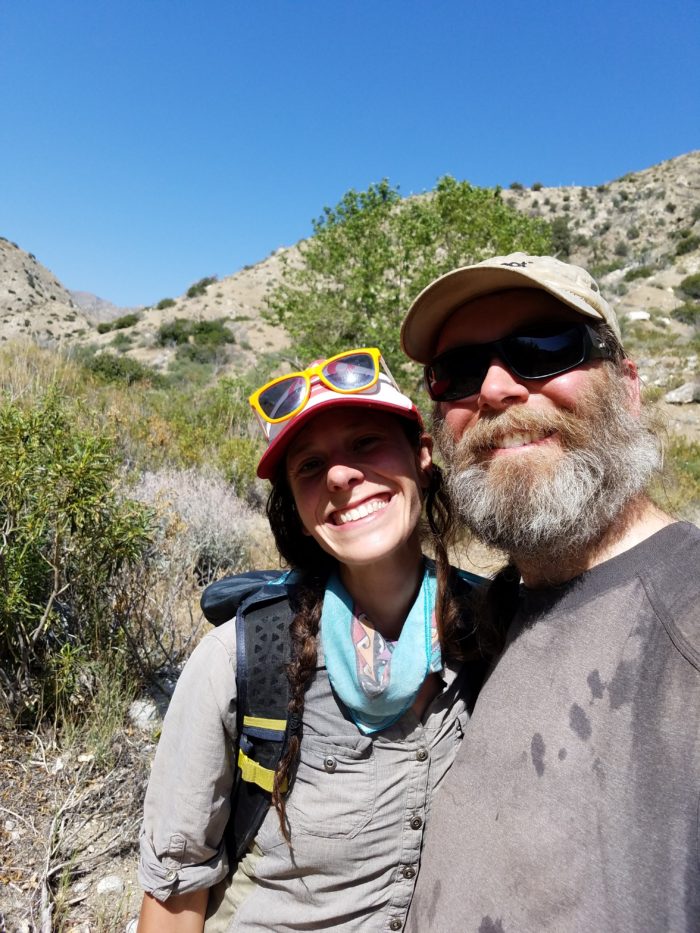 I am paying more attention to what my body tells me this year, so I only pushed on another three miles after Larry left. I cowboy camped alongside Mission Creek with Nova and Amanda. The moon was like a floodlight in my face all night. I am very glad that I chose to camp in Mission Creek Canyon this year because hiking through it in the morning was just gorgeous. 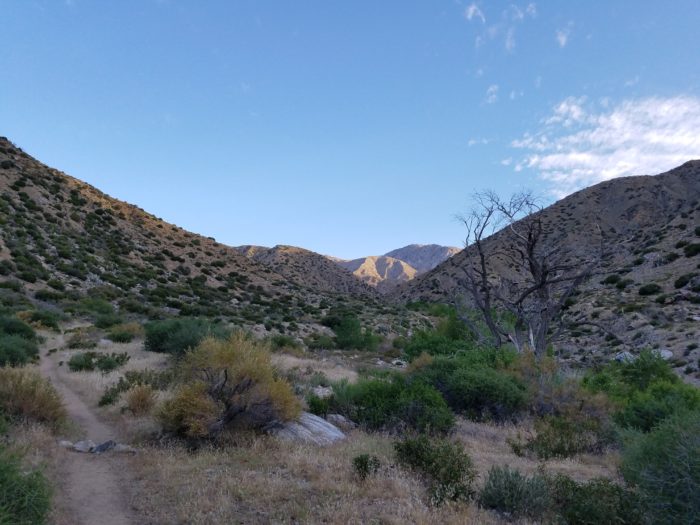 Day four started off as an extremely long, tedious grind up multiple switchbacks out of the canyon back up to altitude. Amanda is a great trail partner because she sets a good, constant pace, and rarely stops. That’s basically the way I hike, and we hike at almost the same speed. 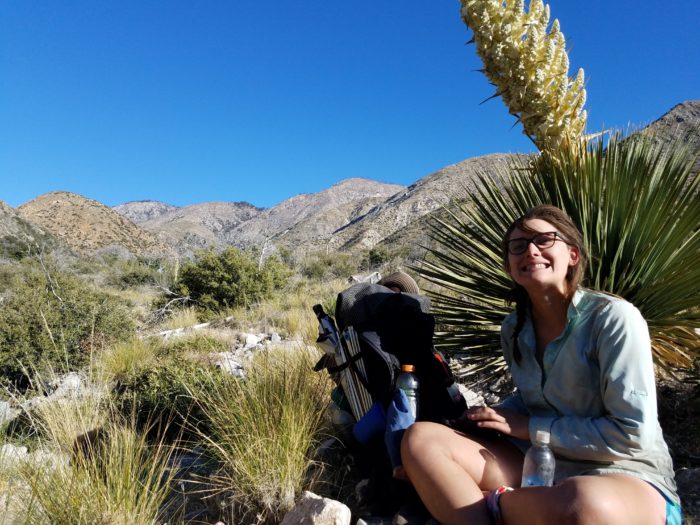 After a nice, long siesta at 241, we moved on another five miles to Coon Creek Cabin. 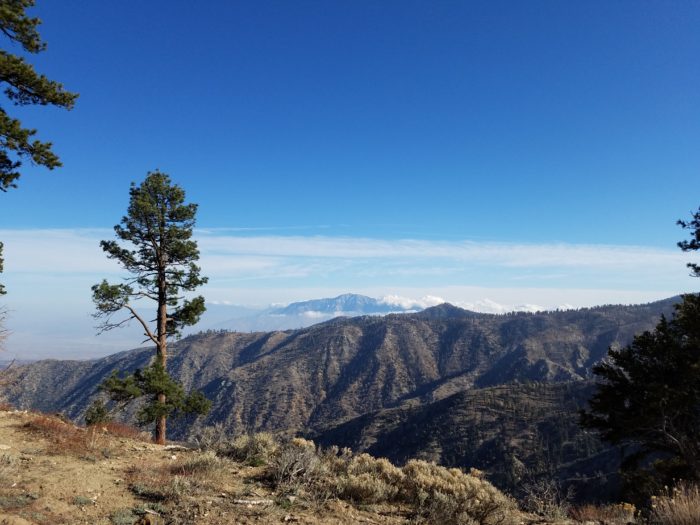 Jacinto getting devoured by clouds.

By this point the temperature had really started to drop and our elevation kept increasing (8,200 feet). Our plan was to go to 248 where there was supposedly camping; however, someone found a weather report and said it was only going to get windier and colder. Also, the cabin had a fireplace. 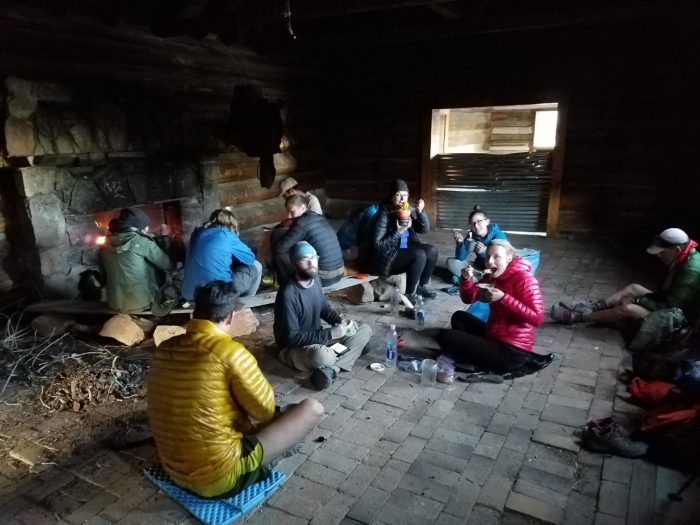 It turns out about 25 other hikers had the same plan because the place quickly turned into a madhouse. My friends and I camped in a sort of entryway room to the cabin and we’re out and on the trail by 6 a.m.

The Push to Big Bear

The next morning started off on a sour note as after about 50 yards I felt cold water running down the back of my legs. I had forgotten to close one of my water bladders and dumped half a liter of water into my pack. Painter waited patiently while I unpacked everything, cursed, warmed my hands in the below-freezing windchill, and repacked everything.  The whole day was awesome, with a steady diet of long, smooth downhills and flat sections of trail. 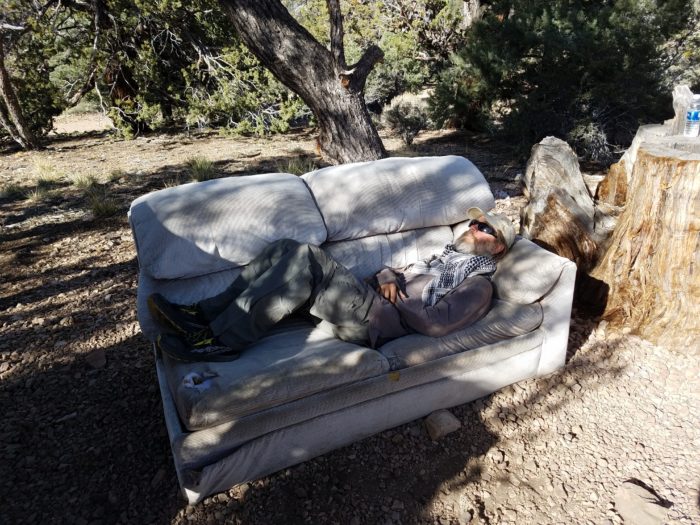 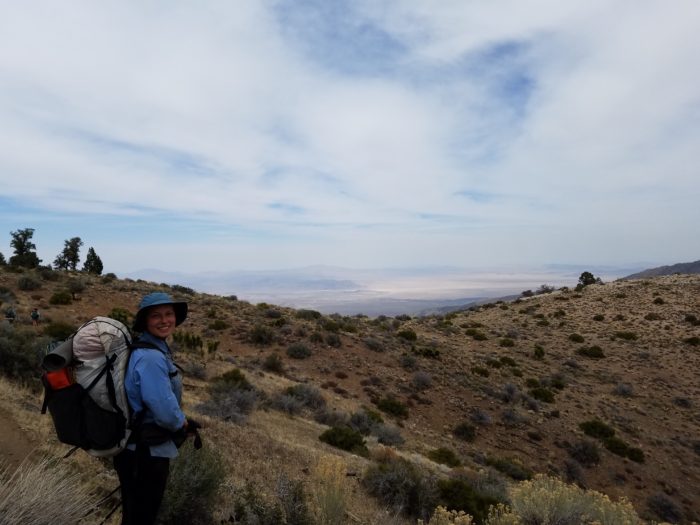 We crossed the ten percent mark, and there was great rejoicing. 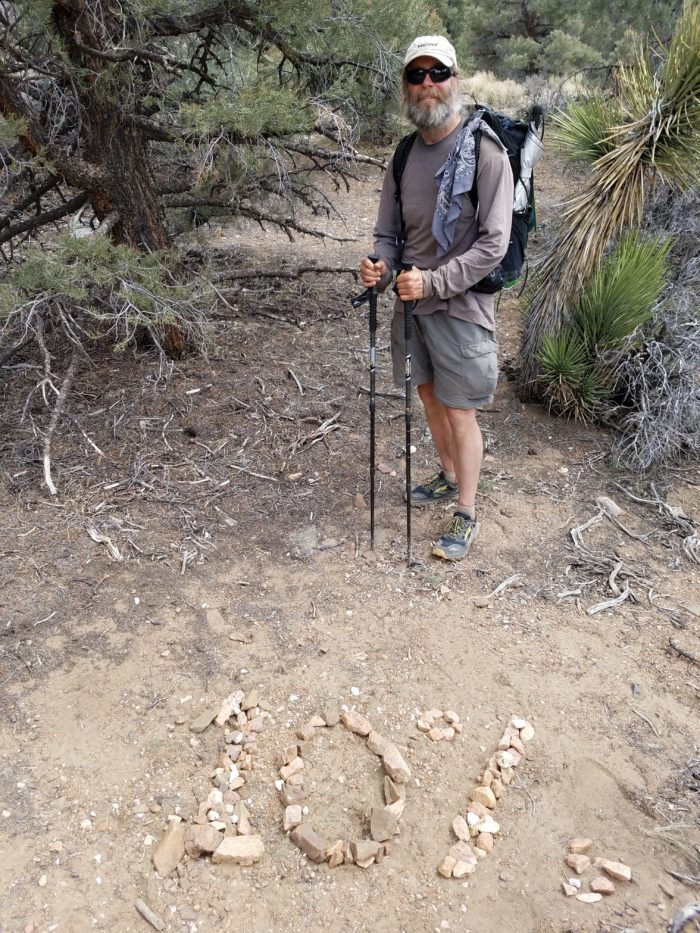 Several fist-bumps later, the women got a hitch into town while Painter and I waited for someone to come back and pick us up. Eventually a bus stopped and it seemed like a good idea so we jumped on. After a bit of wrong-way scenery, we managed to get our way to the Robin Hood Resort, where the four of us crammed into a tiny hotel room.  And ate.  And ate. 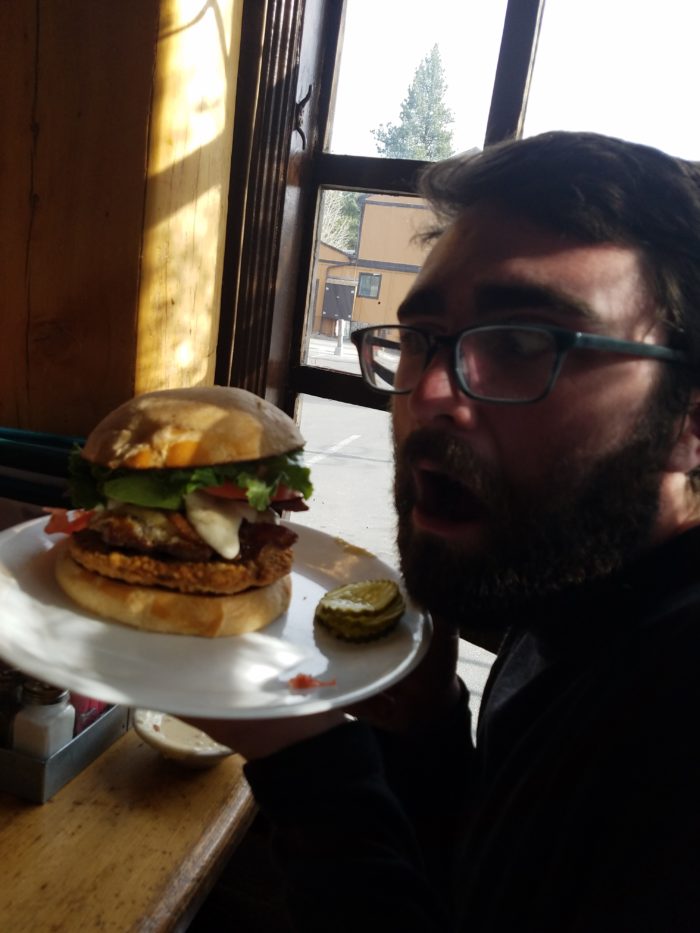 The plan today is to take a full zero because the forecast tonight is for subfreezing rain and up to five inches of snow. While not entirely life-threatening, it sounds like it’s going to just suck. We may end up staying for most of tomorrow as well because once this weather comes in, it’s not supposed to leave until dinner time. I’m getting antsy already and it’s only 10 in the morning.  Five days to Wrightwood,  and I’m off the edge of the map!

To quote the Elder Baggins:

Upon the hearth the fire is red,
Beneath the roof there is a bed;
But not yet weary are our feet,
Still round the corner we may meet
A sudden tree or standing stone
That none have seen but we alone.

Big Bear is nice,  but everyone’s engines are revving for Wrightwood.