Canada to Stevens Pass: Getting Started

For those who read my AT blogs, you may remember that I had a format. I thought the format was a genius idea because it meant I could just plug info into a pre-existing structure and quickly whip out blogs in town without having to think too hard. I also was trying to copy Matt Ufford’s Game of Thrones scorecards on SBNation because he was funny and I figured if I used his structure, then by default I would also be funny.

But the format didn’t work out the way I wanted it to, mostly because I’d just blatantly ripped off Ufford’s entire scorecard model and ranking things while thru-hiking proved to be really difficult. Thru-hiking by definition involves having a lot of conflicting feelings all at the same time.  How do rankings even work in that context? 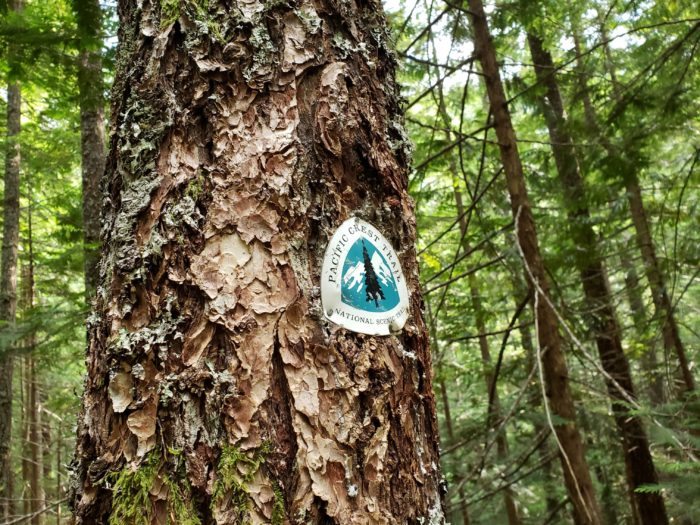 Milestones: This is the PCT.  We get three state border crossings.  This category means nothing now.

My parents, who are my own personal trail angels, gamely offered to drive me to Hart’s Pass, camp with me overnight, and then see me off in the morning.  (For those unfamiliar, the SOBO trail starts on the Canadian border in Washington and the US doesn’t let people enter its borders from Canada through the woods in the middle of nowhere.  Therefore, southbound hikers have to start 30 miles south of the border, hike north, give the border monument a pat, and then turn back the way they came. It’s a bit of a hassle but does have the cool benefit of allowing you to meet everyone 30 miles ahead and behind you.)

So my parents and I arrived at the pass in the late afternoon. After setting up camp, we joined Broken Toe, a trail angel who sets up at Hart’s Pass for three weeks at the start of the SOBO season to help everyone with their border tag.  Also, there was the gaggle of hikers that form wherever trail magic is offered. It had started snowing quite unpleasantly and Broken Toe was in top trail angel form, making sure the soaking wet, shivering hikers stayed by the fire while he made them all cups of tea. I hoped my parents were paying more attention to the kind stranger than they were to the near-death thru-hikers, and I did notice them slip some money into his donation jar. I think parents really like the idea that there’s someone out there who will look out for their kids while they’re off doing stupid things. Nevertheless, it was a cold beginning for a thru-hike that hadn’t even started yet.

The next morning it was much drier and my parents gave me their hugs and saw me off. I was extremely nervous … for about five minutes. It probably took a month for my nerves to settle on the AT, but I hadn’t walked half a mile on the PCT before I fell into a familiar routine. The border tag is obnoxious, but at least it’s a beautiful section of trail to get to see twice. 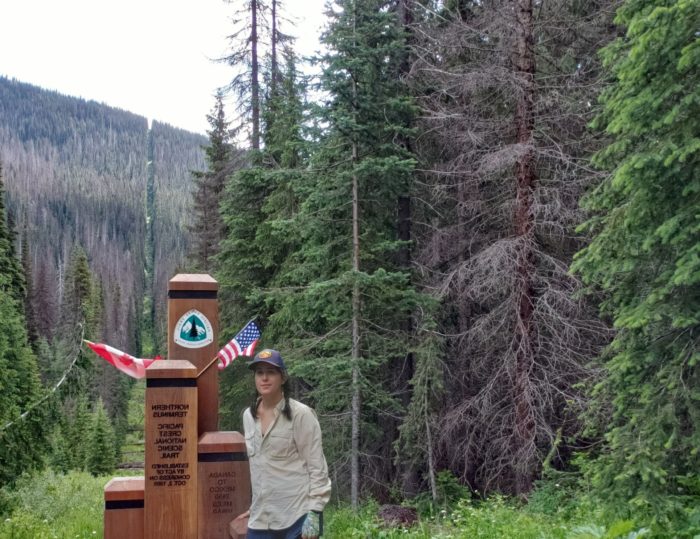 Pro tip: make friends before you get to the Northern Terminus so you don’t have to rely on your subpar timed-photo skills

I noticed two things on my first day: (1) the miles were coming much easier and faster than they did on the AT and (2) there were a whole lotta people out here. The “solitary SOBO” will not be a motif this year. About 50% of the people I met were flip-floppers who started NOBO and jumped up north when they hit the Sierra. I would have made the same decision had I started at the Mexican border this year with the crazy amount of late-season snow California has gotten. The general anecdotal consensus from Broken Toe, rangers, and people in town is that there are twice as many hikers in Washington at this time of year than normal.

In regard to #1, I know everyone talks about the difference in terrain between the AT and the PCT; this is not new information and the subject has been remarked upon to death. I wouldn’t even call one easier than the other, since on the PCT you have to hike more miles and do it faster. But it is just breathtaking to watch the miles fly by. I’d thought 15- to 18-mile days would be a good starting point, but that had me setting up camp on day one at 3 p.m. despite having fumbled around for an hour in camp that morning making sure I’d gotten everything out of my parents’ car. I did a lot of wondering whether I should be hiking farther my first couple of days. I had told myself to avoid 20+ mile days in my first week, but I ended up hiking 21 miles on day four, which is just so mind-blowing to me after only barely scratching double digits during my first week on the AT. I know some of it is experience and a much lighter pack, but most of it is long stretches of trail that runs along the sides of mountains and hundreds and hundreds of switchbacks. 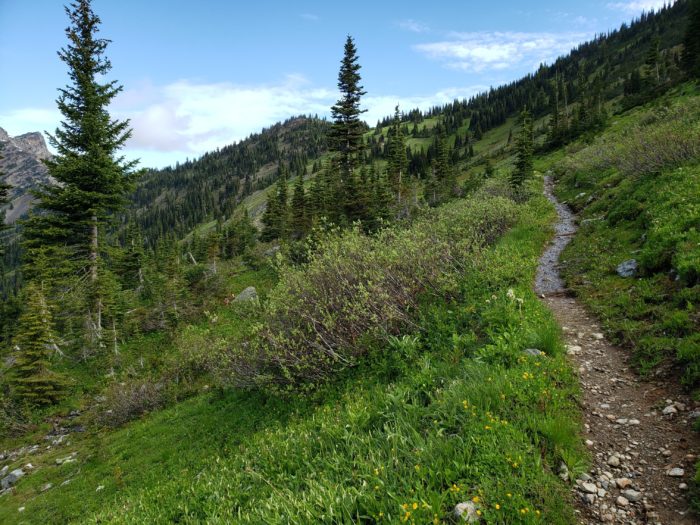 This section included some really amazing and gorgeous terrain. I never know how to describe views and such, but the highlight for me in this section, which I think will be a PCT staple, is getting to see the whole expanse of the trail zig and zag on the mountain in front of you. I LOVE that. I’m OBSESSED with that. I’m pretty sure that’s why I loved the balds in the south on the AT so much. I love standing on a small one-foot-wide dirt trail on the side of a mountain and seeing it stretch back behind me and in front of me for miles and miles in both directions. There’s a feeling I get in my stomach when that happens that’s unlike anything else. The long hike down to High Bridge was a little boring, but waiting at the end was the Stehekin bakery where I had a large cold brew (I ignored the barista who gently suggested I get a smaller size) and a sticky bun the size of my face.  That can really only explain the aggressiveness with which I forced everyone to play Uno with me while doing my laundry in town, as well as the resulting ginormous crash that led me to climb into my tent by 7 p.m. 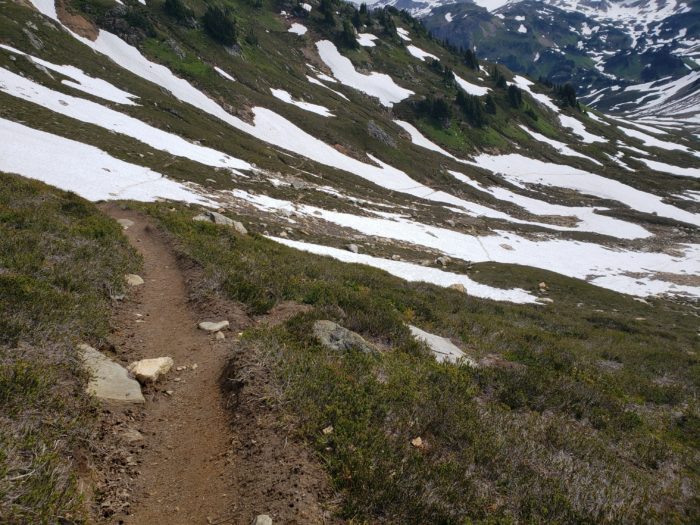 My brain keeps doing this thing where I compare everything to the AT. I’ve been telling myself to stop, that I should appreciate the PCT on its own merits, but I suppose that’s just the context I have. So I looked at this 108-mile section and kept thinking about the 100-Mile Wilderness in Maine. That’s such a talked-up section, but this was just a 100-mile section between towns in Washington, which is pretty par for the course for this state.

So maybe it was me comparing things to the AT that made the trail gods go, “Ah, so you’d like this to be just like that.” Or maybe it was the thru-hiker on his second PCT southbound thru-hike who insisted everyone should southbound the PCT so they could experience Washington without  rain or socked-in views. Possibly it’s just because weather does what it does for all the scientific reasons. But whatever the cause, it proceeded to rain for five straight days.

I’m sure this section is beautiful. I’m sure it has great views. Unfortunately, I couldn’t give you a description of this part of the trail beyond a five-foot radius around me as I walked through it. I work really hard on my mental fortitude during the rain. Really, really hard. But I do max out after about three days. After that, I start wanting to chuck things and I can’t control it. So this 108-mile section became the first real demoralizing test of my thru-hike.

On my last night, less than ten miles from town, I set up my wet and soggy tent, peeled off my wet and soggy socks, and changed into my slightly damp camp clothes and got into my slightly damp sleeping bag. I got out my lighter (don’t do this) and my ramen dinner (really, don’t do this) and my stove (seriously, you’re not supposed to do this) to cook the ramen dinner I had saved for that night after the rainiest day yet. And my lighter was too wet to work. I sadly dumped my ramen into cold water and waited as long as I could (about 30 minutes) before crunching into my sad, cold ramen in my sad, cold tent. “This has to be a low, even for you,” I thought, drinking the cold ramen water, trying to keep my sleeping bag out of puddles. Then my tent collapsed on me.

The ground had gotten so muddy that my stakes couldn’t grip the dirt, instead just sliding out each time I pushed them in. After a lot of swearing and running around in the rain in my semi-dry but progressively wetter camp clothes, I finally shoved rocks on top of the offending stakes and angrily stormed back into my tent, which was now just as wet as outside but at least no longer getting wetter. I stared at my tent door for a while, waiting to see if I was going to cry.

I have unabashedly said that I cried a lot on the AT. I cried in a thunderstorm my first night in Georgia. I cried a whole lot more times before I got through those first 188 miles. Back then I cried over way less than five days of rain, cold ramen, and multiple tent collapses in the middle of the night. Crying is a part of thru-hiking for me. So I thought I would cry. I was pretty miserable. Instead I just got back into my sleeping bag and fell asleep. Apparently the biggest difference between my AT and PCT thru-hike so far has been the amount of histrionics.

To successfully thru-hike, you have to wake up each day and put your hiking shoes on, no matter how happy you were to take them off the night before. And so the next day I put on my sad, wet, slimy shoes, not without several choice words for their refusal to dry out overnight, and I hiked into town and ate a half a pizza. That tells me that I’m well on my way to eventually hiking enough to be able to eat a whole pizza. We’re officially thru-hiking, baby!