Cascade Locks to Ashland: In Which I Hike Through (Most of) Oregon

I promise this isn’t going to be a blog-per-state scenario; that just seems to be how things are currently shaking out. 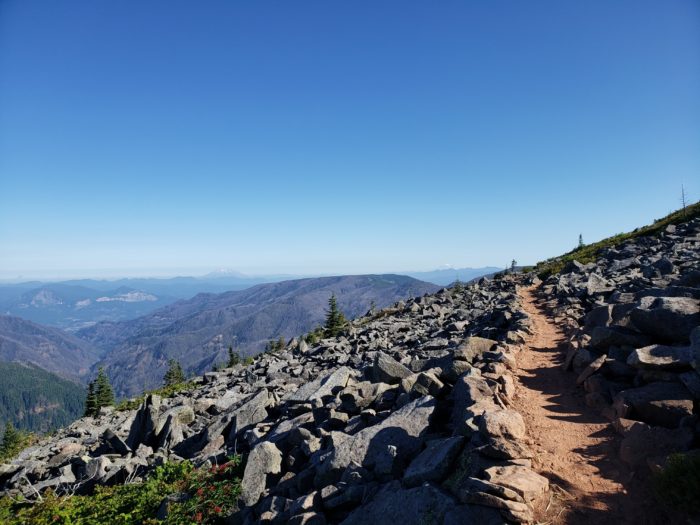 Milestones: Nearly done with my second of three states and passed the one-third mark. 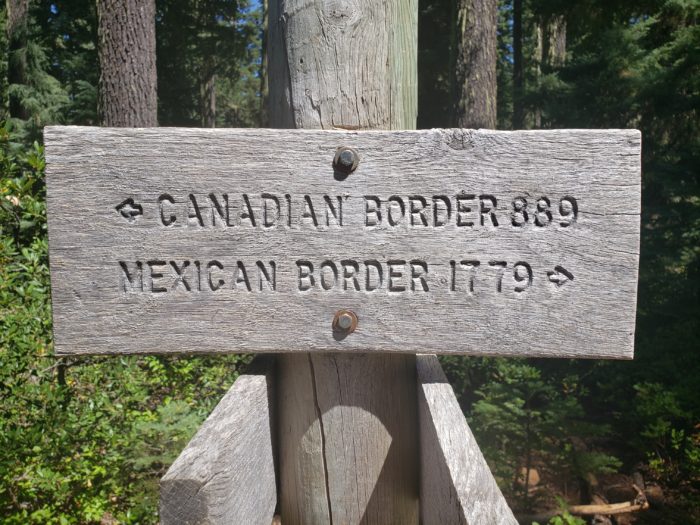 The trip out of Cascade Locks is planned strategically by SOBOs because the Timberline Lodge 50 miles to the south has a breakfast buffet that is probably the famous trail meal of the PCT. I wasn’t strategic but I am forever motivated by food, so I woke up at 3:30 a.m. to hike ten miles to the lodge. 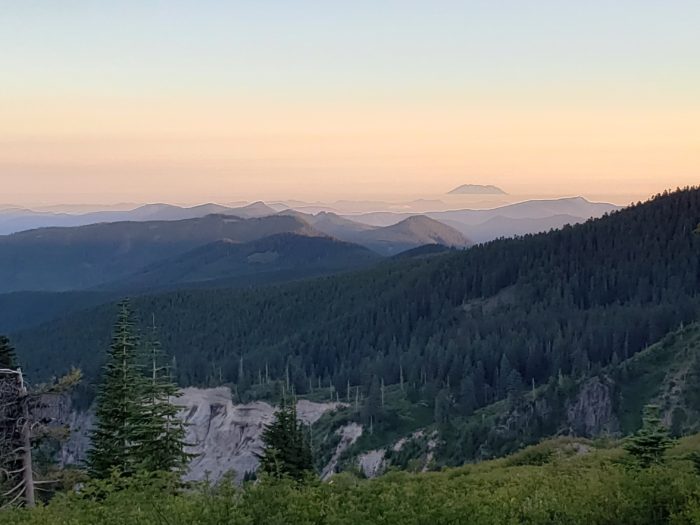 I arrived in time to not only have breakfast but also spend a couple more hours there. Stretching out in the lobby after, I wondered aloud if it was rude to take a nap on one of their couches. A thru-hiker named Batgirl then slid this sign toward me. 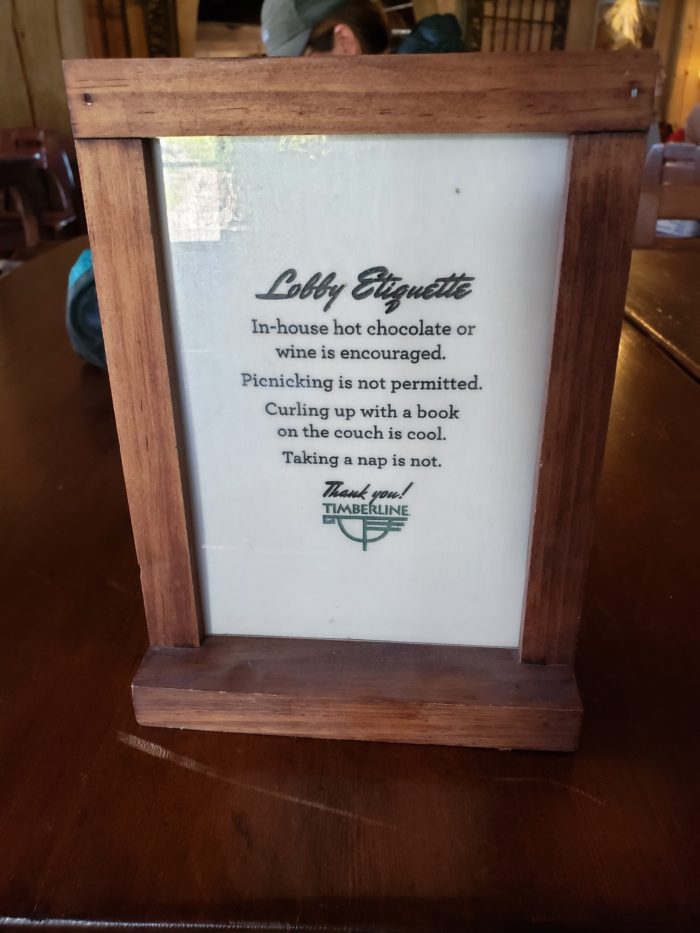 In other words, no nap.

So I hiked out instead, full and sleepy and now extremely motivated by the new shoes waiting for me 100 miles down the road at Big Lake Youth Camp. My old shoes (which had held my feet during all the miles in Washington and had trained and run a marathon with me before that) had huge tears down the sides; Oregon sand and dust poured into my shoes with every step. “Might be a long hundred miles,” I mused.

It was a long 100 miles. That section, like an unfortunate portion of Oregon, has been hit hard by fires in the last two years. 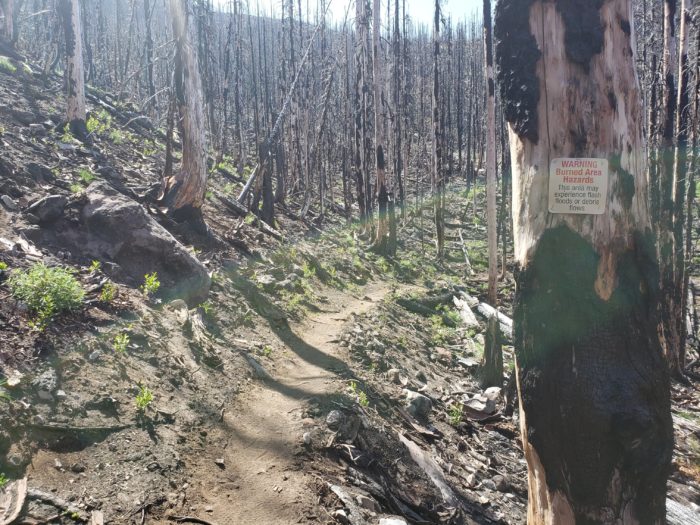 It’s interesting that Oregon is considered the green tunnel state of the PCT (sometimes as a negative) since I was so relieved every time the trail finally wound back into cool, serene woods and away from shadeless, morbid deathscapes. A Guthook comment I read later suggested focusing on the new forest growing back in and I found this did help some.  But I still spent a lot of time feeling sad about the state of wildfires on the West Coast.

It was probably no shock that wildfires were on the brain. When I got to Big Lake Youth Camp, I just had time to happily smell my new shoes before a ranger walked in to inform us that dry thunderstorms were in the forecast and a red flag warning was in effect for the weekend. I had been caught in a huge thunderstorm the day before, but that had also included rain and hail. I never got comfortable with thunderstorms on the AT and that was when they included faucet-like rain and therefore no fire danger.  I was immensely relieved that I happened to be planning to visit my aunt and uncle out of Willamette Pass on the day the worst of the storms was forecast.

That was a weird week. Every afternoon was marked by rumbles of thunder off in the distance, and a lot of thru-hiker angst and worry spread around the trail. It was also one of my favorite sections of Oregon, starting with the lava rock fields, which I found very cool and not deserving of their less-than-savory reputation among hikers, after which I was spit out into the Three Sisters Wilderness. 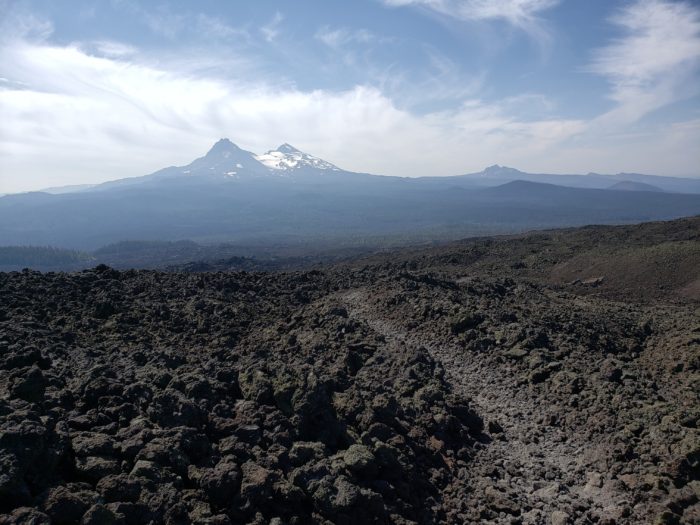 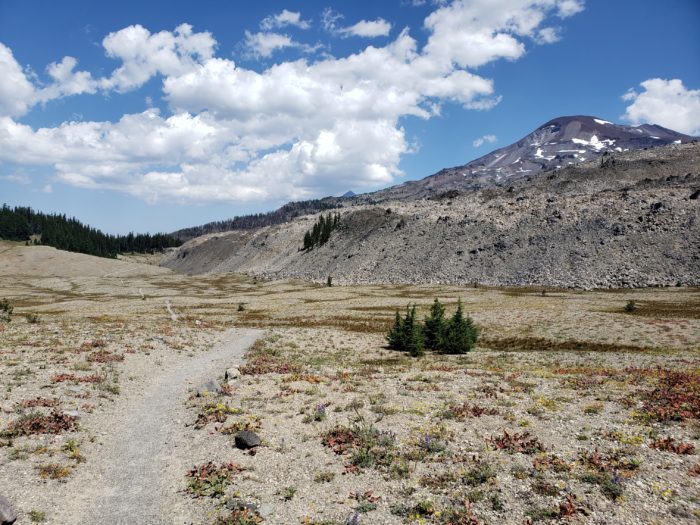 One of the Sisters.

The last 50 miles were almost entirely free of burn areas and every three or four miles I’d pass by a different lake. I woke up early the last day and got into Willamette Pass before noon.

Being hosted by friends and family was not something I really got to experience on the AT and I didn’t realize how lovely it would be to have food brought to me at the trailhead and home-cooked meals thereafter, and not just having a place to stay but a place to stay where people care about you. I also got to wake up at 4 a.m. and hear rain pounding on the window while remaining warm and dry indoors. I’ll never be able to explain just how good that feels.

The next day had rain in the forecast, but what was rain to me by that point? Especially since it meant the fire danger had passed. I’ve been (probably overly) paranoid about time limits on this hike so I’ve been extremely judicious with my zeros. I’d love it if I was the kind of person who could hike 30+ miles on the daily, but it looks like I am not. Therefore, I’ve got to beat the snow to the Sierra by hiking consistently and diligently and displaying a lot of discipline on days like that one when all I wanted to do was waste it away sitting on my aunt and uncle’s couch, preferably with a stack of blankets on top of me.

It was a slow hiking day and I shed a few tears when the rain and thunder started that afternoon. There were no other hikers on trail and I knew I was setting myself up for another lonely stretch as most hikers would be zeroing. I couldn’t believe I had voluntarily left my aunt and uncle’s house for this and I vaguely recalled how some of my friends who lived near the AT had described the difficulty of hiking away from their homes once they passed through. “You’re going to have to get used to this feeling,” I told myself sternly. I have friends and family strewn all along the West Coast and I’d be seeing even more of them in California.

Like all sucky things, the day passed and I decided I needed a new thing to focus on and look forward to: California. It was getting closer every day and 90% of my motivation for hiking the PCT was specifically hiking through California. Adding to my motivation was the fact that the mosquitoes had reached biblical-plague levels in Southern Oregon and I was feverishly imagining they would vanish the second I crossed the border. Fueled by one of the many “second” winds you get while thru-hiking, I marched on.

I took the Crater Lake alternate route to have the chance to see the big blue inverse volcano instead of more burn area, and that became my new favorite day in Oregon. 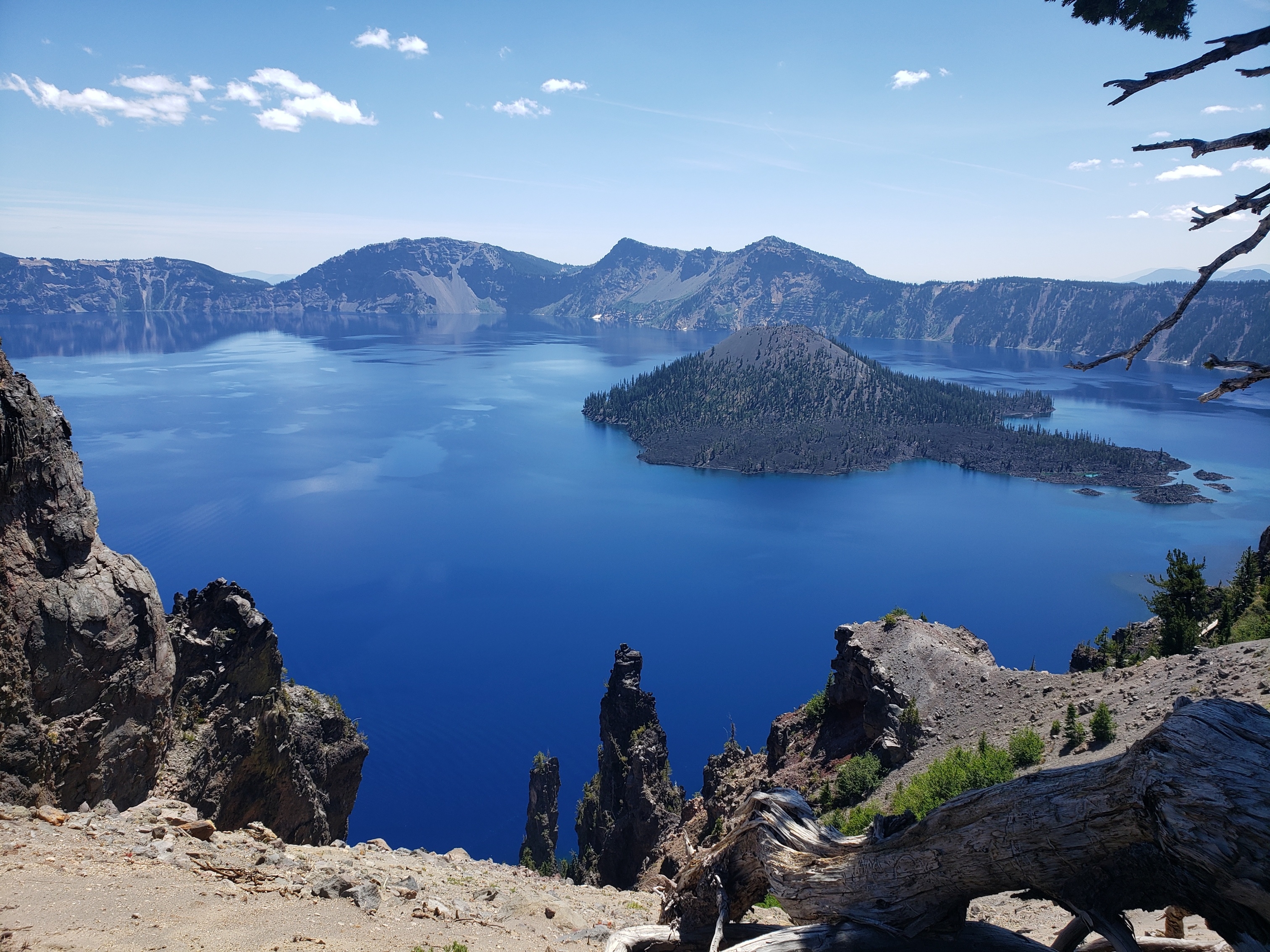 The alternate route includes some up and downs, but since the trade-off is that you get to see the lake around the entire rim, those up and downs never felt pointless. That night I camped at Mazama Village. Their PCT camp is currently closed but they’d set aside a single car camping site onto which 40 or so NOBOs and SOBOs all squeezed their tents. I felt slightly guilty that our car camping neighbors on either side had to stare at the strategically placed neon domes smooshed into every available inch of space of our site, but the boisterousness and hiker trash vibes ended well before the camp’s quiet hours started at 10 p.m.

I demolished breakfast at the Village’s restaurant the next morning. I was aiming to finish the next 105 miles in four days. There I would pit stop at Callahan’s Lodge and skip over Ashland entirely, excited as I was to get to California just 30 miles farther on. But I had to make a mad dash to the bathroom before I could grab my pack and hike out, which I chalked up to the amount of coffee I’d drank.

About an hour later I still hadn’t hiked out, but there had been quite a few more mad dashes to the bathroom. I wavered back and forth for a while between my pack and the bathroom (with its plumbing and running water) before finally deciding, “Screw it.” Every second I delayed would make it that much harder to get to California by the day I wanted to. I messaged my parents that there was a chance I had Giardia and strapped my pack on.

During the next couple of days, I thought often about a hilarious and brutally honest blog post my friend Snapchat wrote on the AT. The poop emoji was used frequently. I don’t think the gory details are super necessary, but the events that followed rekindled my memories of that blog. I’ve been pretty lucky regarding the lack of a need for the poop emoji in my own posts to this point, given that Giardia and norovirus and regular old food poisoning are all common issues in thru-hiking. But now it became apparent that my luck had finally run out.

On the third day, I finally accepted that I wasn’t going to be able to skip over Ashland and the clinics that reside there after all.  I couldn’t even wait the day and a half I’d need to hike the last 40 miles, so I got to a road and stuck my thumb out. Maybe five cars went by in a 15-minute span.  I don’t think I could have looked more desperate if I tried and finally a kind local named Jon picked me up and drove me into Ashland. There the urgent care confirmed that yes, I did have Giardia. The doctor strongly encouraged me to take a day and in the same breath told me to avoid fried, greasy, and spicy foods as well as alcohol, as if there’s any point to a day off in town when it doesn’t include any of those things.

I want to stress that I filter all of my water and have no idea where I got Giardia from.

Anyway, California isn’t going anywhere and I’m more excited for it every day. The 1,000-mile mark is in sight and the halfway point is just beyond that. I do have to say this hike feels like it’s flying by. I just gotta wait until the old intestines are ready to cooperate again. 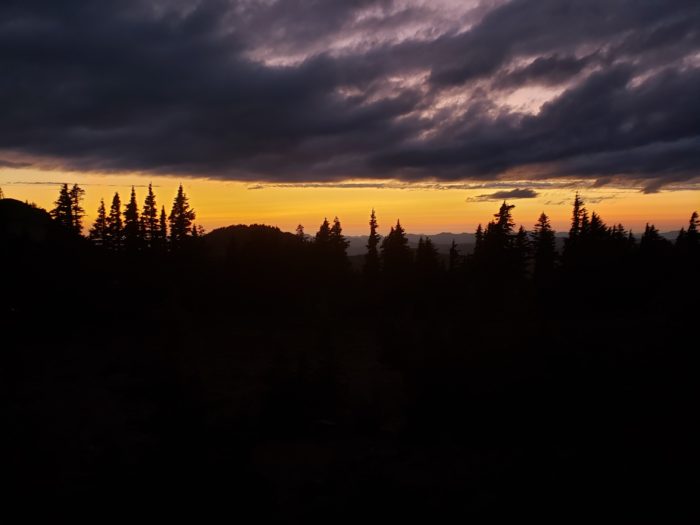