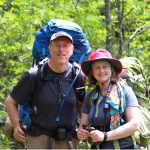 Changes in Technology on the Trail for Old Farts

There’s no doubt that technological advances have changed life on the trail. Many people equate technology with electronics, but there’s much more to it than cell phones, music, and podcasts. Trail life is hardly even recognizable to those who thru-hiked trails as recently as the 1980s. But looking at the average age of the current class of thru-hikers, that’s a lifetime ago. The little whippersnappers of today have no memory of the days when we thru-hiked, in the snow, uphill, both ways.

I had a three-person Moss tent (that’s a manufacturer name and not the type of material) that weighed in at a little over six pounds. To its credit, it was a freestanding nylon tent with two vestibules and room enough for three people and gear inside. In an effort to reduce tent weight over the years, the floor space has actually been reduced to not allow area for gear. There’s also been huge advances in material with the introduction of Dyneema (formerly known as Cuben Fiber). This material is lighter weight, has greater strength than nylon, and actually repels water rather than absorb it like nylon does. 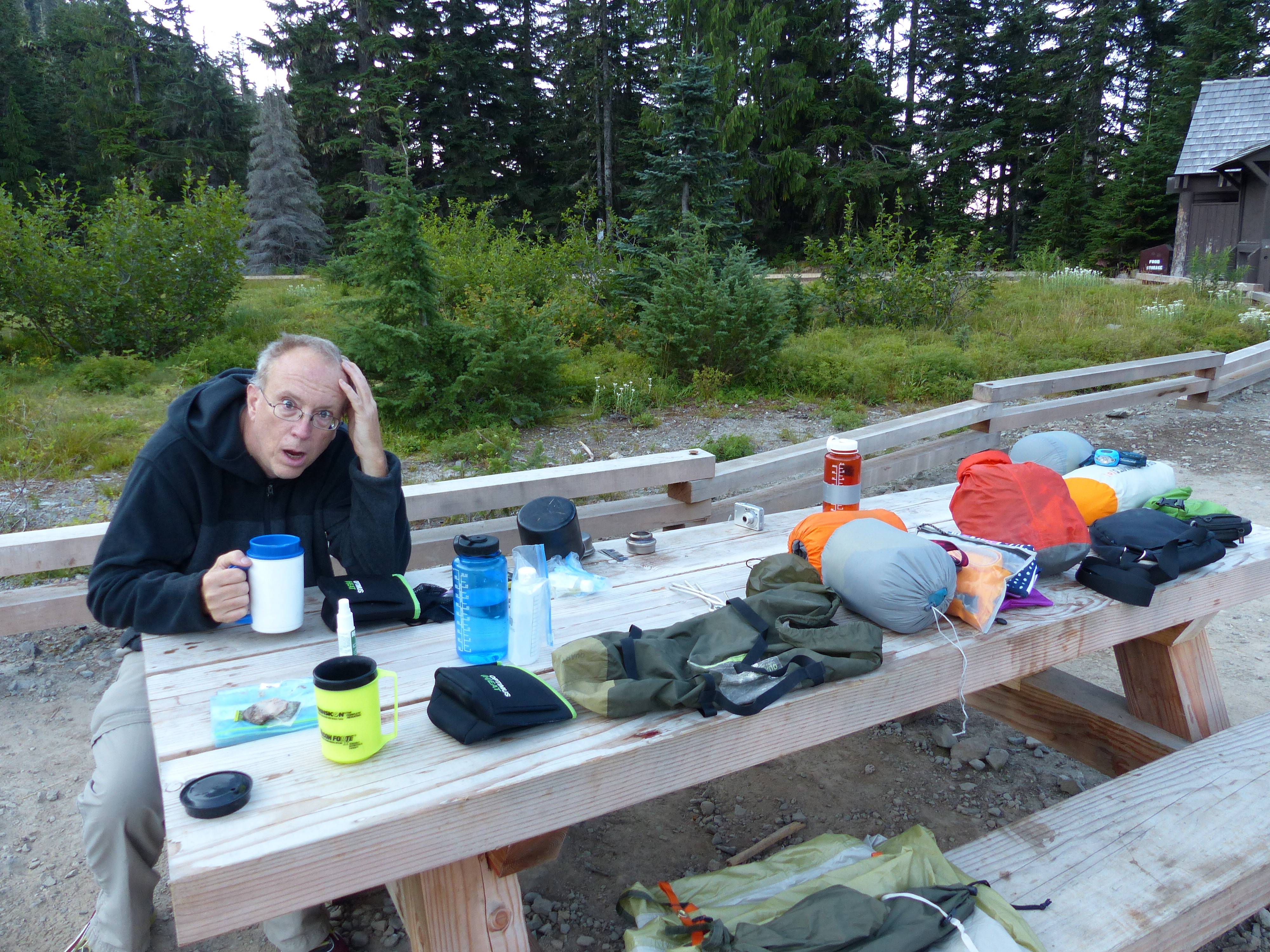 Technological advances in equipment and electronics can make for confusion in packing for the trail.

If you’re willing to spring for a Zpacks triplex tent, a three-person tent (really, a true two-person tent with space for gear), it weighs in at less than 23 ounces. This weight is only achievable because the tent uses your hiking poles instead of having a set of dedicated tent poles. Why carry poles that have only one use when you can use your hiking poles to set up the tent. Hiking poles are a heck of a lot stronger, making this tent able to safely withstand high winds (we’ve personally set up in 60 mph winds with no problem).

Packs have also come a long way. When I started hiking in pre-cell phone times (aka, the Dark Ages) we only had external frame packs to choose from, or, if we could get someone to drive, an army surplus pack which was a lightweight aluminum plate to tie gear to which included thick nylon shoulder straps w/o padding. Waist belts? We don’t need no stinking waist belts.

Today there’s an amazing assortment of ultralight packs weighing less than a pound and a half. Conventional wisdom is 40-liter packs are plenty big enough for a thru-hike. Bunny and I have chosen not to go ultralight, particularly concerning packs. I still carry an expedition pack with an 88-liter capacity and weighing in right at six pounds (still lighter than my first pack I carried to Philmont in 1978). 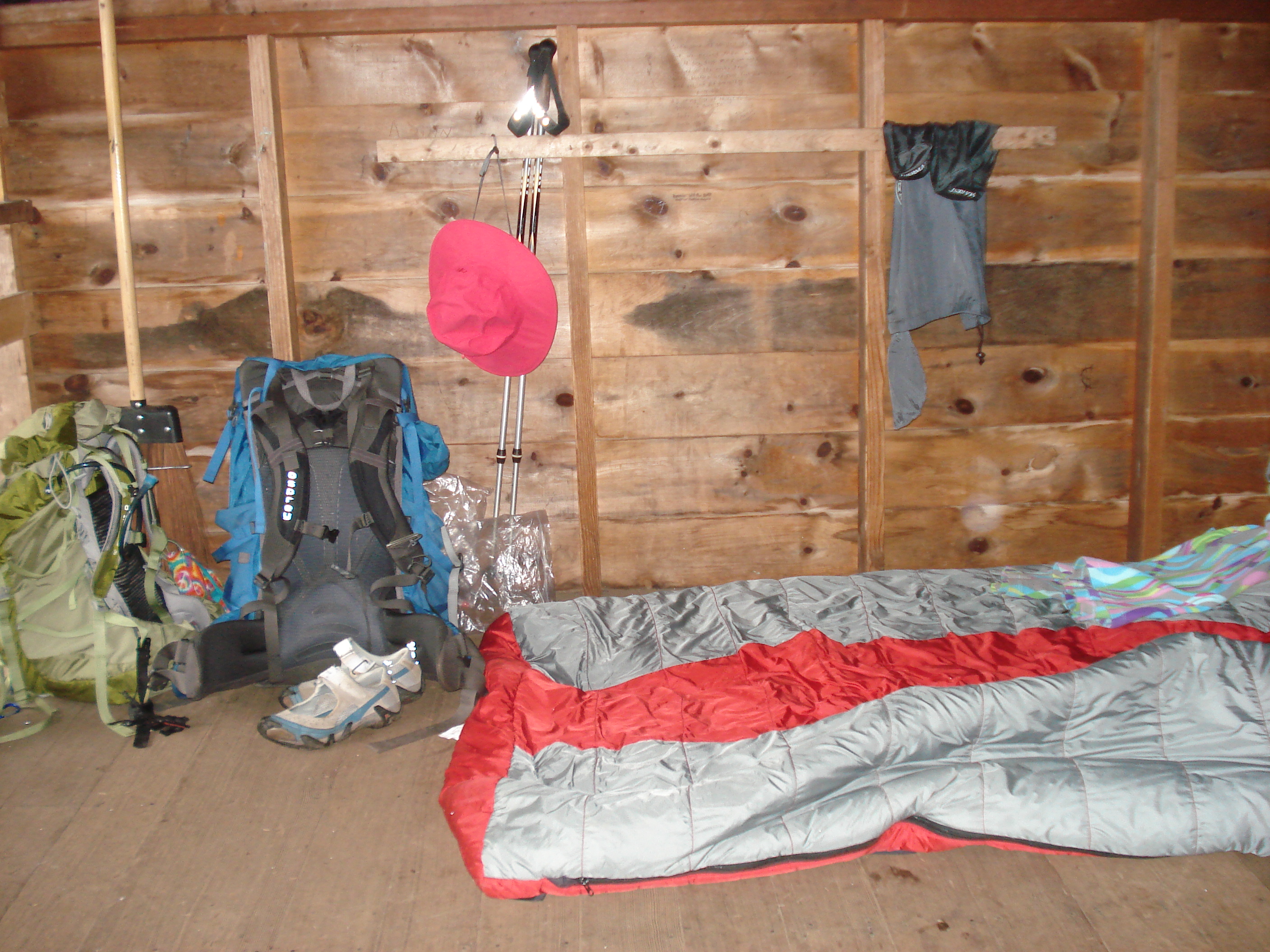 We have agreed on internal frame packs, but can’t pull the trigger to go ultralight.

There’s a reason I don’t adhere to the lightweight, smaller pack. Actually three: 1) I’m cheap, 2) I like lots of padding, and 3) I hate crap dangling off a pack. My wife claims I have OCD issues, but I want everything inside. Most of the time, my pack is only half full, but when we have to carry a bear canister, I don’t want my camp shoes dangling on the outside.

Last up is our sleep system. I remember the first sleeping bag I got when I joined Boy Scouts at 12. It was a mummy with synthetic fill and weighed almost five pounds. Now the options for sleeping are nearly endless. In warmer weather, we go with a Therm-a-Rest quilt that weighs a little over one pound. When it gets colder, we use a hydrophobic down bag rated to 20 degrees F and a liner. Bag and liner combined are only 2 1/2 pounds. 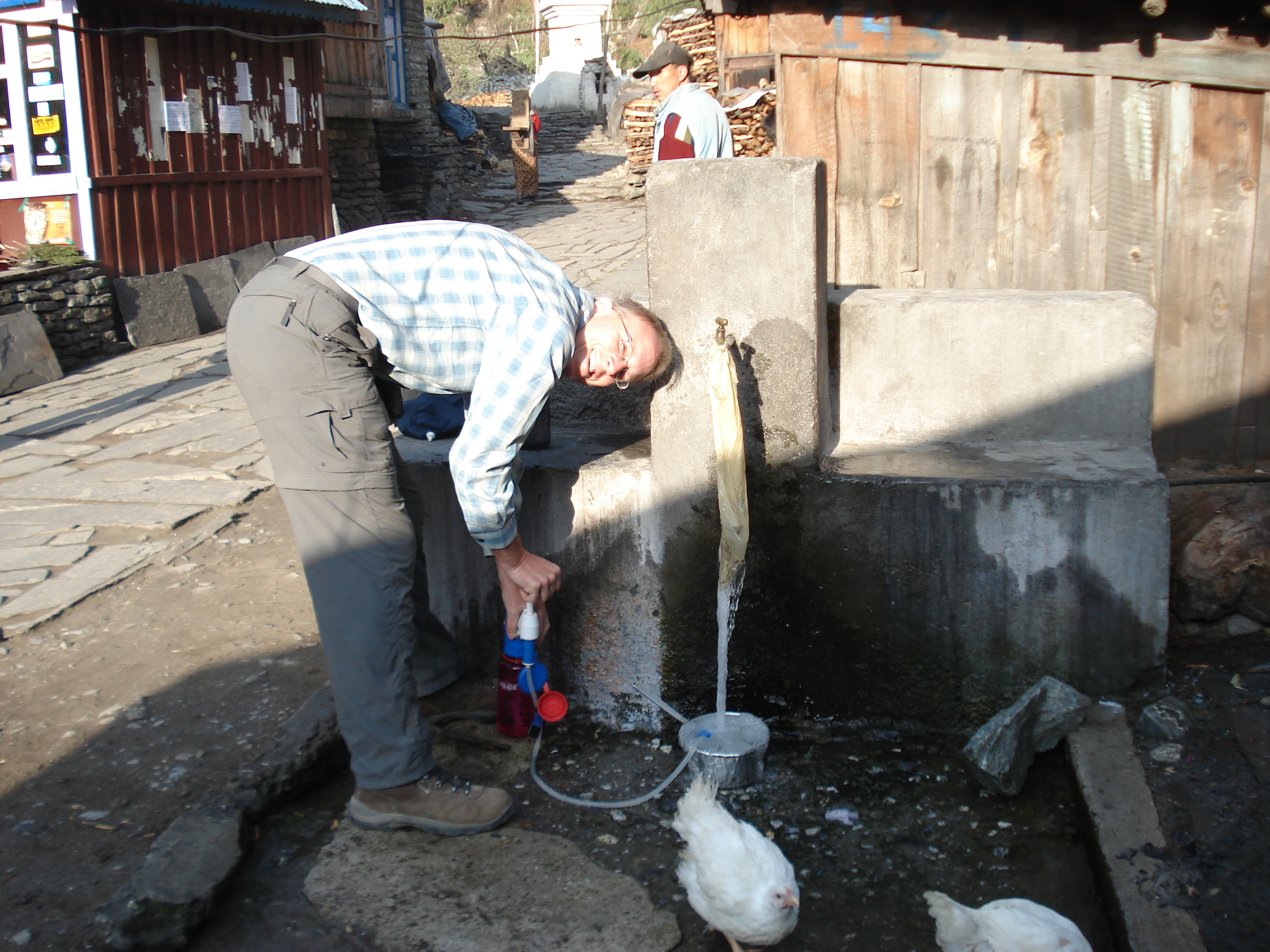 We also use a sleeping pad. Some ultralighters choose to not even bother with a pad. If they do use one, it’s usually an accordion type closed cell foam pad. It is lightweight but doesn’t provide enough padding for this old bag of bones. Depending on time of year and weather conditions, we will use some sort of inflatable pad. Most of the time, we go with a Big Agnes “insulated” four-inch-thick mattress. It’s compact and comfortable, preventing our hips from bottoming out, but cold as hell. If it’s cold, we use an Exped Duo, which is warmer and similar in concept to a sleep number bed where we each get to choose how much we inflate our side. We also have Therm-a-Rest Neo Airs, which are warmer than the Big Agnes mattresses, but thinner. It all depends on my mood, when we’re packing up, upon which we will take. I do have a history of anger with Big Agnes.

Cotton kills. If only we had known that at the founding of our country, a lot of misery could have been avoided. When I started hiking back in the ’70s, polyester was only for leisure suits. We wore cotton. When it got wet, we stayed wet and got cold. We did use wool socks, but they were so scratchy, we had no choice but to use liners.

Today, Bunny and I use Merino wool long underwear. We wear engineered shirts that deflect the sun to keep us cool and have built in UVA and UVB blocking technology. They wick away sweat to keep us from chafing. We have lightweight, hydrophobic down jackets and breathable waterproof jackets. We would scare the hell out of a caveman with our high tech clothing (let’s hope that Geico doesn’t film one of their caveman commercials on the trail near us). 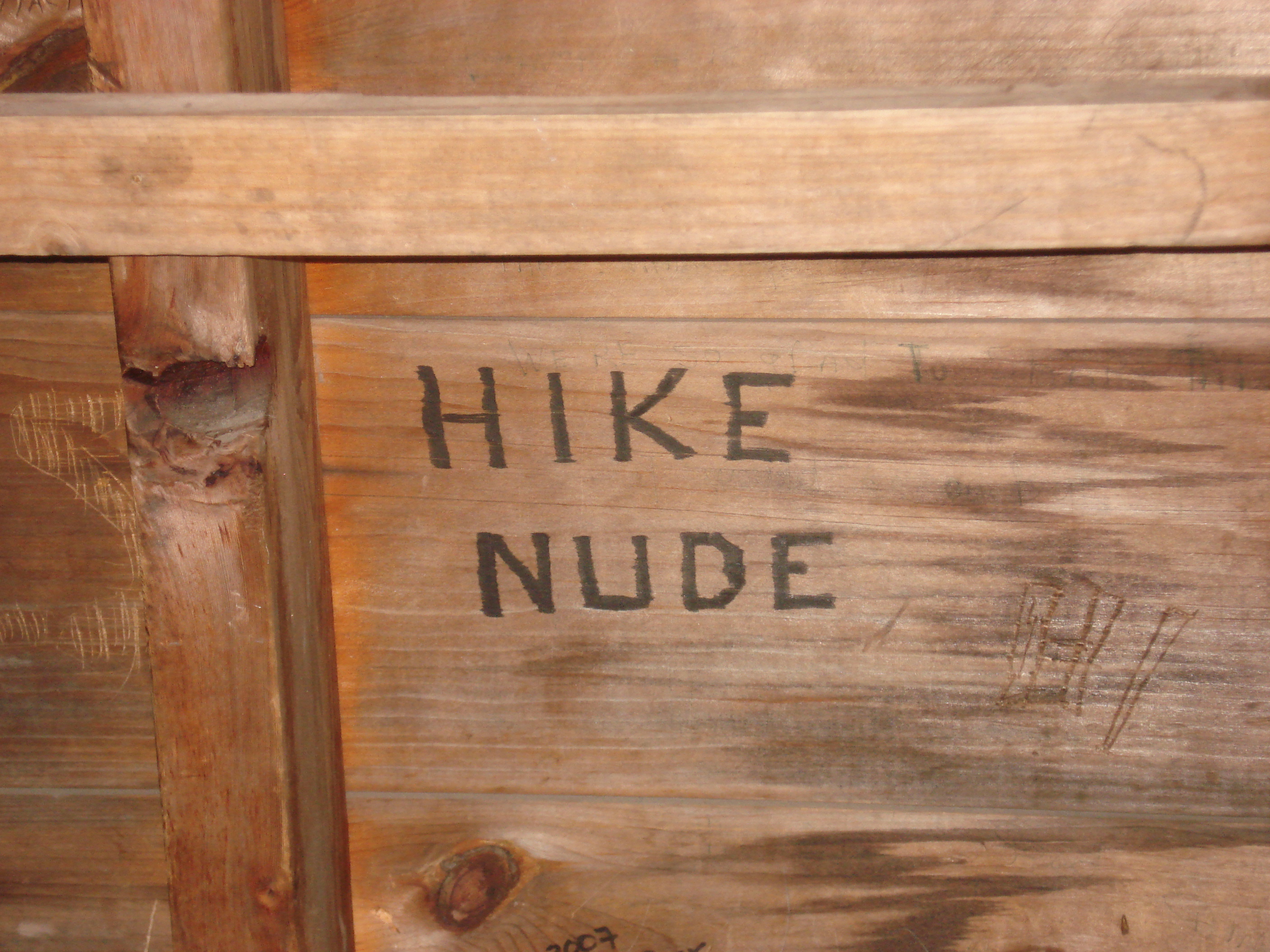 With all the clothing choices, it might be easier to return to basics.

Every article of clothing we wear has been engineered for backpacking. Not only do they provide comfort, they are lighter weight than normal clothes. I paid $30 for a pair of underwear. Since I tend to be a forward thinker, I bought them in black so I don’t notice the weeks worth of soiling between washes.

We made the decision (actually, my wife decided and, being a good husband, I agreed) that we will cook meals every day. It was also decided that I would do all the water hauling, food organizing, food carrying, and cooking. As I recall, we each had a vote, but mine didn’t count in the final tally.

I used to carry a multi-fuel stove before falling in love with the Biolite, but it’s not practical to carry three-plus pounds of stove. We still splurge, with me carrying a JetBoil for cooking. We start every day with a minimum of hot coffee and have a hot supper before bed every day. It’s the little things that cost weight and time that make a trail marriage work. There’s no limit to how much it costs me to keep my Bunny happy. 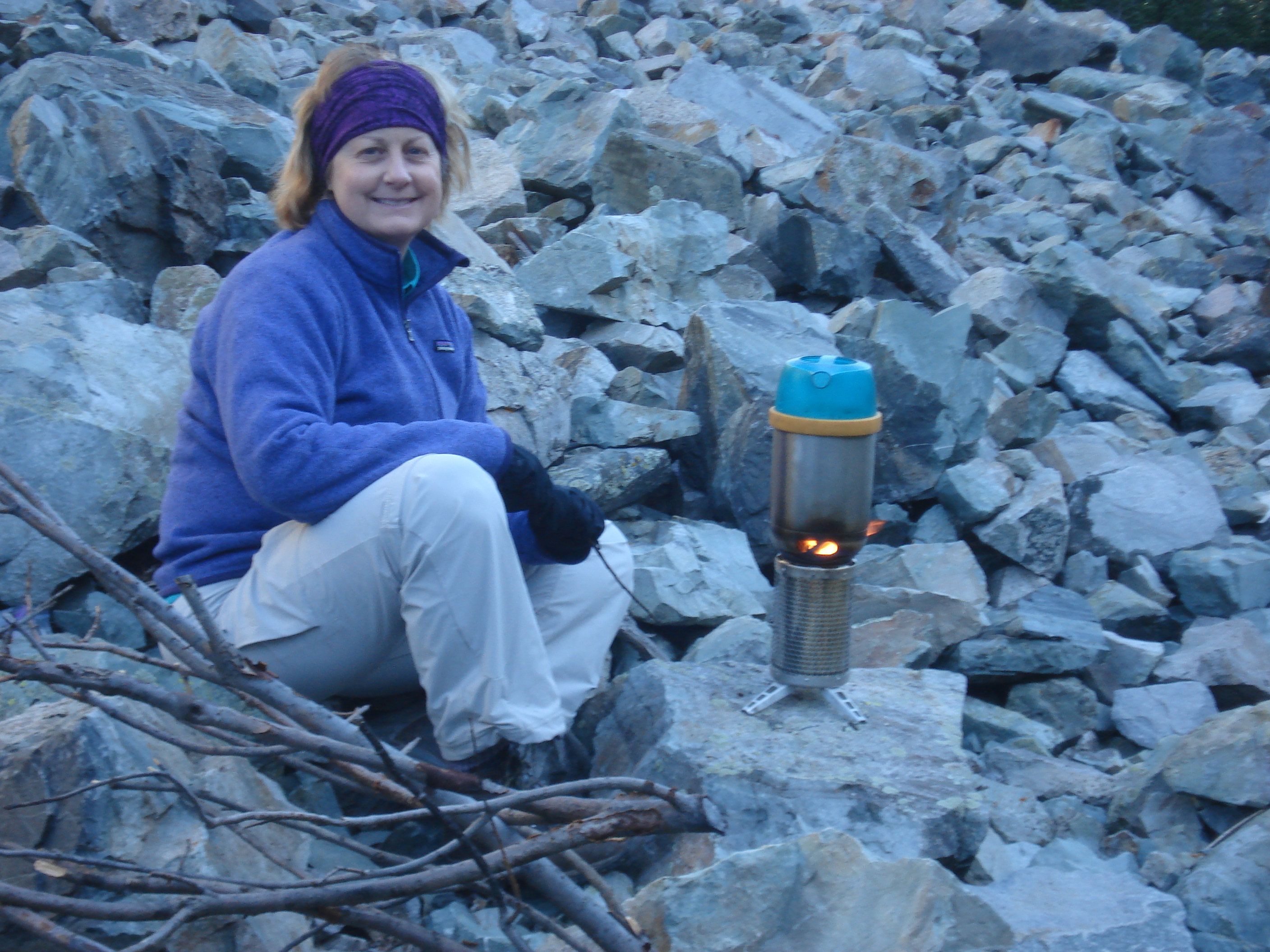 Never having to buy fuel is tempting but not worth the weight.

Many people still don’t filter water on long-distance trails. We call them sick a lot of the time. Actually, it’s possible to not filter and do fine. I just don’t like the risk when a Sawyer water filter is so inexpensive and lightweight. When we were in France, Bunny and I always filtered and the French never filtered. I saw many people drinking from streams running through fields of livestock. I didn’t hear of anyone getting sick.

Last, But not Least, Electronics

Smart phones have probably had the biggest impact on trail life. I seriously question whether kids 25 and under even have internal voices. The range of distraction they provide to younger people who have never not had them in their lives is staggering. One of the things I like about backpacking is the freedom to disconnect and get away. I hate cell phones with a passion. That’s why I don’t have one.

Only my wife carries a cell phone. I try to borrow it every now and then to study Guthook. It is an indispensable part of trail life, having replaced maps and guidebooks. It’s unimaginable to think of going into a town and not having reservations for a place to stay, all worked out ahead of time. 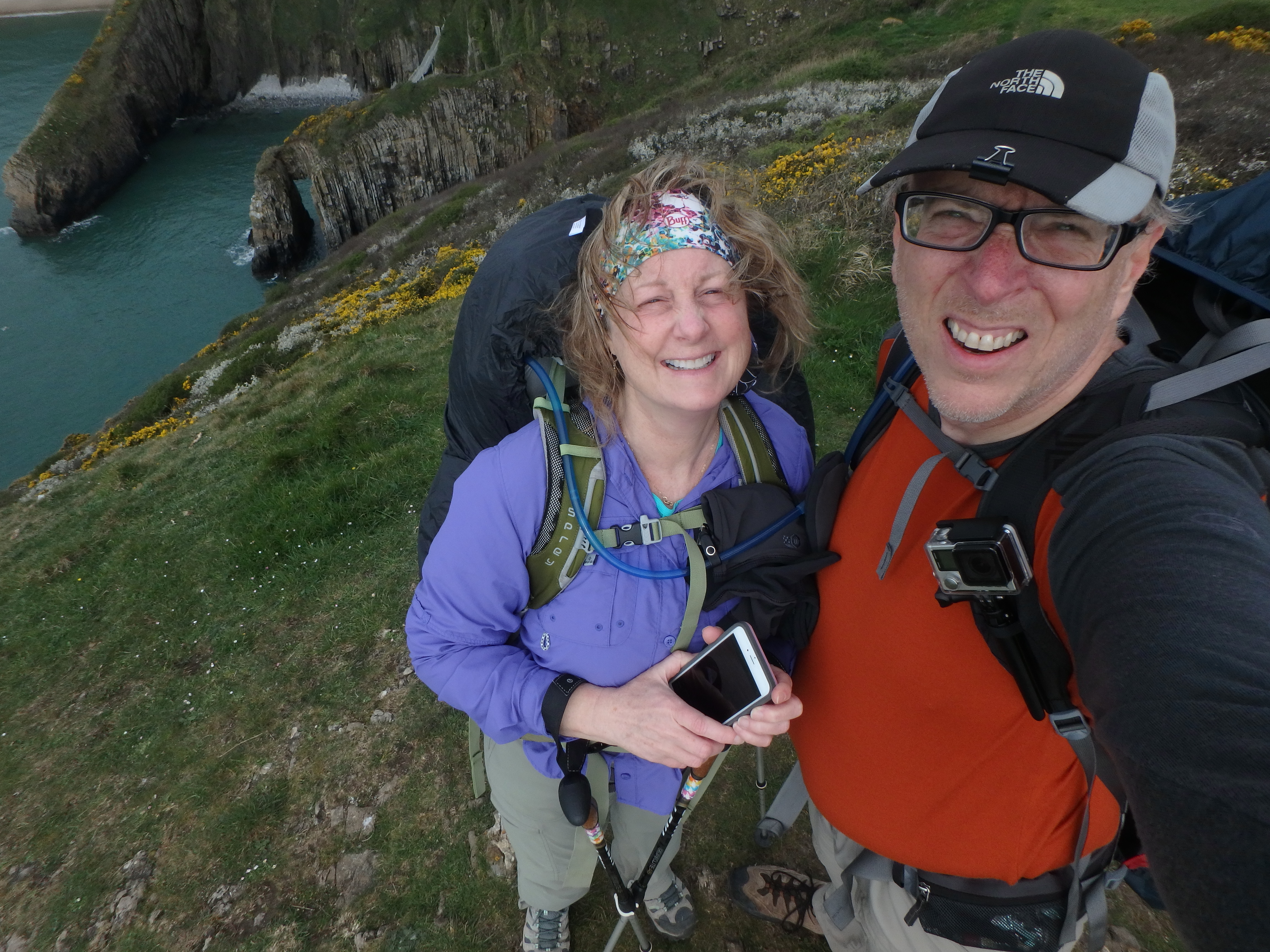 It’s just not possible to avoid electronics in the backcountry.

I wish I could say I was electronic free but I suppose I should be honest here. I carry an iPad mini for my blogging and a digital camera (I don’t care what anyone says, iPhones cameras are not good for less than ideal situations). Bunny carries the hated iPhone, as well as a camera, an iPad mini for photo editing, and an InReach tracking device. We each carry power bricks. God help us if our electronics die before town.

In the two years we have been backpacking full-time, I have made a conscious decision to not listen to anything other than nature while walking. It’s the only guideline I have strictly adhered to. I said I wasn’t drinking sodas or eating ice cream. Both of those resolutions failed at the first road crossing we came to, but I will not plug into my ears until I thoroughly hate listening to myself. Wait a minute, I’ve always hated listening to my inner voice. I’m just not going to miss out on trying to shut my inner voice up. Om Padme mani hum—until I am one with nothingness…

The Evolution of Ultralight

Daniel Boone was the first ultralight hiker. He carried a long rifle and a Bowie knife (long before David Bowie was even a gleam in his father’s eye). Everything else was a luxury. If he wanted a bed, he’d shoot a bear, build a fire, cook it, and sleep in the fur. He didn’t mess with TP. Real men use their hands for everything (or find a rabbit; he was the original ad man for Angel Soft). 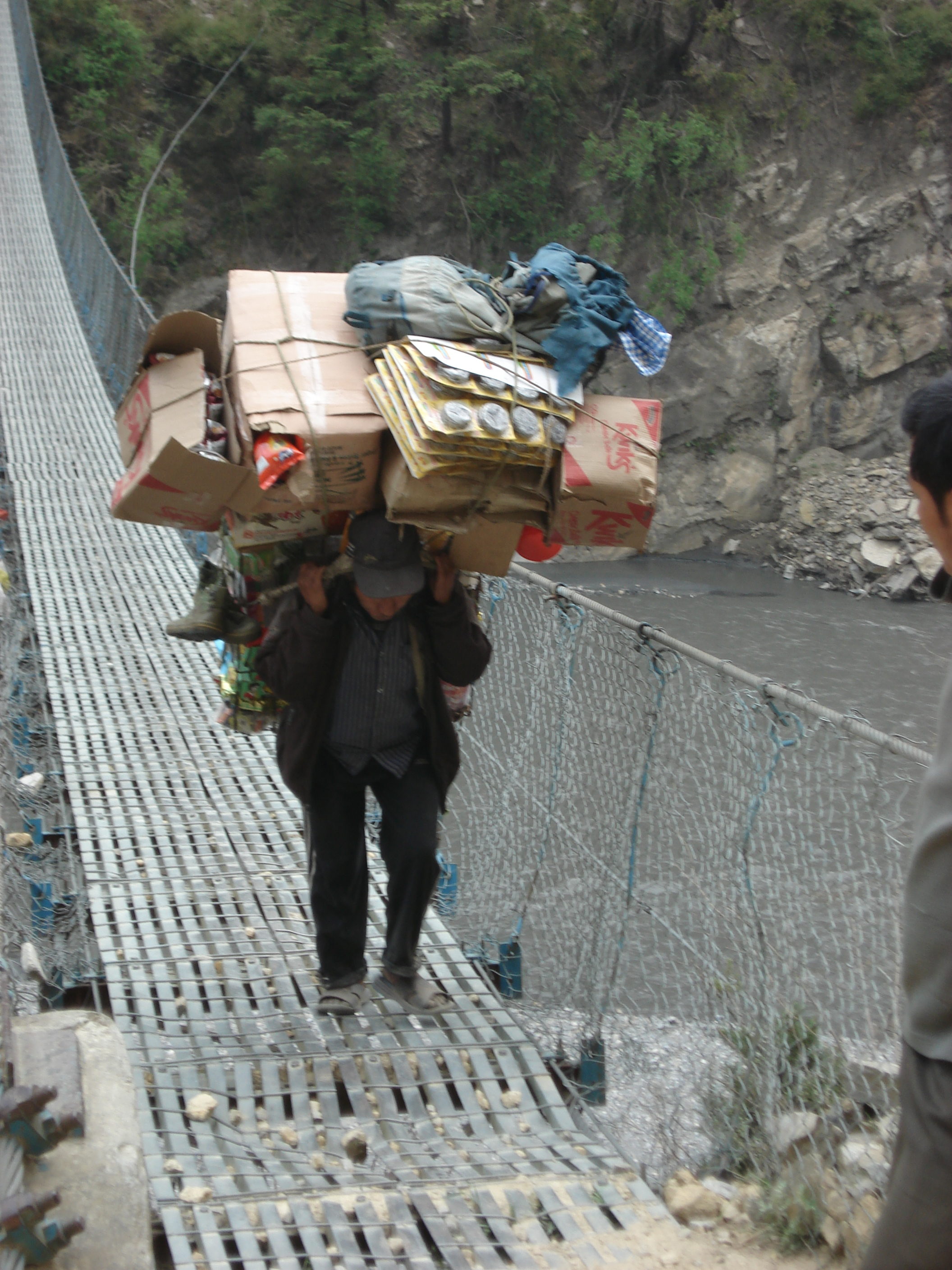 Perhaps we are overpacking.

By Mr. Boone’s standards, today’s ultralighters live a luxurious life on the trail. By an ex-cheerleader’s standards, “Oh, hell no.” We cut where we can but generally carry way more than we need to survive. We both carry Therm-a-Rest pillows and Gossamer Gear Chrome Dome umbrellas; right there is an extra pound each. Because this is our chosen life not just for a single thru-hike, but for multiple years of backpacking, we do not want our experience to be about sacrifice or speed. More power to the speedy ultralighters. We are too stupid and old to go fast. Wave to us as you pass.