Climb up from Seiad Valley (July 29)

I recognize as I write this that I am so far behind in my posts!  The plan is to continue to write about the days that stuck out to me, even though they are over a month ago, at this point.  It has been more difficult to find available computers and libraries (due to COVID restrictions and hiking through remote wilderness areas at times) than I had anticipated.
I write on this day from a trail angel’s house.  I know her only through another hiker, but when I found the library closed today, due to Labor Day hours, I asked her if she’d let me come work from a computer at her house.  Not only did she pick me up from town and drive me to her house, she let me sit at a desk in her guest room, work from one of her laptops, offered to do my laundry, and offered her shower and fridge, “Make yourself at home”.  She offered to do my laundry several times, finally wearing through my MO of staying as independent as possible.  At long last, I said, “You know, I would take you up on that”, and joked, “You’re wearing me down!”  I meant that in the best way.
Another example of the many kindnesses I’ve been shown on this trip.  I’m thankful.  It means a lot to me to be able to share this trip, in this way.
July 29
This morning my friends and I walked to the Seiad Valley General Store in time for breakfast.  Seiad Valley is one of a few trail towns along this trail.  The PCT literally runs through the small town, making it a convenient resupply stop.
The atmosphere at the store/ café was wonderful.  I got the feeling that this small café gets a lot of business from thru hikers.  The owners had set up a canopy in the yard beside the store, with chairs and tables.  There was also an intentional system there.  At opening hour (0900), all the hikers lined up by the front door to place their orders.  A waitress wrote them down one by one, looking each hiker up and down with dry humor when their turn came.  It seemed the waitresses were amused by us, maybe by our ravenous appetites and over-appreciation of food.
Everything was delicious.  Many hikers ate, then laid down at one of a few picnic tables under shade trees for a nap.
Most hikers were planning to do a road walk instead of the trail in this section, but one friend and I chose to continue on the designated trail.  (The road walk appealed to some because it cut off a few miles, and reportedly was poison oak free, unlike the trail.  But it also was the less scenic option.)
My friend and I set off in the late morning, so full from breakfast and milk shakes that I was carrying half my ordered breakfast in a ziplock bag in my pack.  A good snack for later.
It was a long ascent, from roughly 1500 feet to over 5000 feet.  It was also so very hot, I believe it was the hottest afternoon I’d experienced yet.  105 degrees F.
We climbed steadily, then I had to break to sit a while.  The heat was draining, requiring me to take frequent breaks in the shade to settle again and rehydrate.  It was physically challenging to make this climb on such a hot day, and yet it was also the kind of day I soak up- memorable and exciting for being challenging, and satisfying to be capable of hiking through the heat.  I think it is only because we had been hiking in hot weather day after day prior to this, that we were able to tolerate this one without more difficulty.
There were great views on the climb, and we were able to pick out where we had hiked in the previous day, and Seiad Valley below, where we had been only hours before.  I think we both felt satisfied that we had stuck to the PCT, and been rewarded with these great views.
We got to our second spring and felt a need to sit there a while, drinking and refilling.  We both tried to squeeze into the shade from one slim tree trunk, but it was not the largest shade patch.  It was remarkable what a difference it made, to sit in that shade versus under the glare of the sun.
I gathered my water bottles, then told my friend I was going to hike further up the trail to find a larger shade patch to eat under.  From the summit of the mountain, I could see a thunderstorm gathering in the distance, over mountain ridges in the great beyond.  Lightning started flashing, and it was both ominous and beautiful.
My friend caught up and I gestured and said, “Look at this storm!”  He looked at me calmly eating a snack, and said, “Yeah!  Come on, Old Soul, it’s time to move!”  He thought I was strange for sitting there, observing it without any sense of urgency.  I guess I felt we had some time yet!

Panorama of the storm.

We had an exciting and beautiful afternoon, hiking in the exposed heights as the thunderstorm approached.  We watched clouds form and darken, and rain in sheets on other mountains. 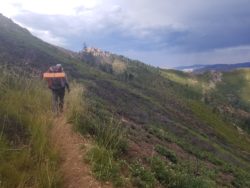 Hiking on, trying to get to a lower elevation.

Panorama of the storm.

We also took it seriously, conferring about what to do, about whether it was better to stop where we were or hike onward in hopes of making it to a lower spot before the storm reached us.  We ended up hiking into a kind of saddle, putting down our mats and lying there with our tent flies covering us, as it rained.  No time to set up our complete tent body!
Fortunately no lightning struck nearby.
I thought it was so very unique, and so much fun.  We chatted, and I just sat in the rain with the cover over my legs.  I loved sitting there talking and laughing, looking around at the surroundings and marveling at things like the pretty moss hanging from a nearby tree.  The rain falling against the orange cliff side behind us, so calm and beautiful.  A light rain that passed and dried from the ground in a matter of minutes.
Eventually we got moving again, and the new concern became watching smoke puff up from a mountain in the distance, and wondering if it was a forest fire from a lightning strike.
I’m sure that the storm set off several fires, as we saw and smelled smoky skies the next morning.  None were close enough to threaten our path or safety, but it was something we stayed attuned to over the next days.
Maybe it was the kind of day that is hard to describe, but it was one of my favorites.  Hiking with a friend, meeting the challenge of hiking through the heat, cooling off in a rainstorm.  It all makes for a good day.
< Previous Post
Next Post >