September 11.  Stehekin.  This morning I walked the two miles from the camping area to the famed Stehekin bakery, instead of waiting an hour for the 0800 shuttle.  Some hikers are reluctant to hike anything extra in town, but I like getting more of a feel for the place I’m in.  In this case I walked by several cozy summer cabins, an organic garden, and pretty views of Lake Chelan.  (Pretty neat, later learned that the garden is tended by a hiker who bought it in 1978, whose website ends with, “I am passionate in supplying the highest quality vegetables possible for your enjoyment and health.  I am honored to do so.  Come visit the garden in Stehekin and shake my hand.”)

I had just started to smell the bakery from up around the next bend when a truck passed by, the bed packed full of hikers.  I laughed and waved back to my friends waving at me.  They had managed to snag a ride while waiting around for the shuttle.  (Though Stehekin is not accessible by road, vehicles are present there, driving up and down the 22-mile gravel road- I guess they come over on the ferry.)  The driver stopped and kindly offered me a ride, but I just decided to walk the final two minutes.

The food at the bakery was wonderfully delicious!  I ate a quiche and a croissant, sitting at a large table full of hikers, relishing that I felt so hungry and that each bite tasted so good.  Though I’d enjoyed the hikers I’d been around, our group had recently expanded, and I often picked at my food when eating with all of them.  Too much going on, makes me nervous.  (Even out here, among all this peaceful beauty!)  It both amuses and exasperates me, but I guess the hunger will come back when my body needs it, even if I do continue with this group.

We all got back on the shuttle bus for a ride back to the trailhead.  There were many hikers waiting for a ride into Stehekin when we arrived at the parking area, but none that I recognized.  I packed up my gear and headed off down the trail. 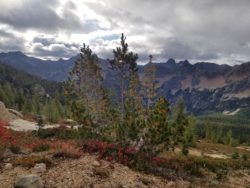 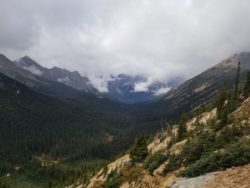 Clouds gathered, then turned to rain.

I listened to my audiobook while hiking, then heard familiar voices approaching.  Two friends I had met on my first day out here, caught up to me.  We’ve often laughed and exclaimed over our memory of that dramatic first day, one of them suffering through a bout of heat exhaustion, complete with retching and cramping, shortly after I met them.  The story always ends on a note of triumph, someone exclaiming, “And yet, here we all are, facing the finish!”  They made it, in spite of a dramatic start.

They said, “We’re just talking about the trip, like what gear made it all the way.  What gear stayed with you?”  Then we hiked along and looked back on the journey, talking about what surprised us, what we’d do differently, whether the future holds another thru, alluding to what the trip had meant, what we’d carry away with us.

I enjoyed hearing about their hike, as we had hiked together a few days in the beginning, then, as so often happens, I hadn’t run into them again, over hundreds of miles, until these final weeks.  They’d been on my list of hikers I wondered about and had hoped to see again before the trip ended.

Trail stretching across the mountain into all that beauty.

A good way to face the end of this trip; reflecting at the journey’s end, with the first of the friends I made.  The ones who met me as the banjo-carrying hiker (short-lived), and got me laughing more loudly than I had in a long time.  It’s been a good trip.

September 12.  Slept in some this morning because it was cooler, after having rained a few times in the early hours of the morning.  The mist and clouds gradually cleared to sunshine and blue sky, and it felt like a miracle to see the pretty bowl I was camped in, slowly appearing to my eyes.  I climbed up the bowl, to Cutthroat Pass, and found a hiker sitting there, eating… a morning bowl of ramen!  He may be one of the most cheerful hikers I met on this trip; he said, “I have a lot of extra ramen right now, so I thought, “Why not?”

My friend, walking on the trail ridge above this wide valley.

I sat with a friend for an early lunch break, both of us wondering about the darkening sky.  It started to rain, and I put my rain gear on, watched the rain falling peacefully down over the valley below, shouldered my pack, and started the descent.

The rain passed in a few hours.  In the afternoon I climbed up Glacier Pass, through a series of open switchbacks among bright, bright red berry bushes, and once again, absolutely beautiful scenery all around.

Partway up the climb, I heard rustling and movement.  I looked across the forest and spotted a black bear sitting way up high in a tree, a reassuring space of distance away.  Because the tree was rooted further down the mountain from my current switchback height, I had a pretty good view of him, even though he had climbed a good way up into that tree.  I watched him a long time, audibly chewing and clacking his jaws together, scrounging for insects, I believe, breathing heavy, shnuffing mildly at times.  I was amazed that the sound I heard from him most loudly was those jaws clacking together.  (Later I learned that bears clack their teeth and chomp when they are afraid, apprehensive, nervous.  Maybe he was apprehensive about me being nearby, but it seemed to me that he was apprehensive about falling out of that tree.)  He looked at me a few times, but without any will or effort to move from his spot anytime soon.  I took a video and watched a while longer, then moved on.

This wildlife encounter reminded me of the mountain goat and my surprise over its size and coat.  It’s a gift to see these wild creatures for myself, to witness and learn from their presence and behaviors. 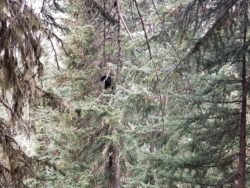 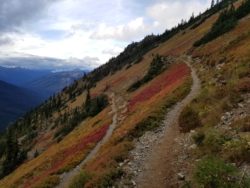 Hiking up to Glacier Peak. 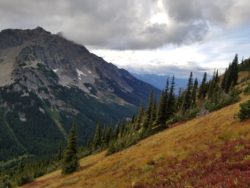 September 13.  Chilly last night!  I was really glad to have my sleeping bag liner, which Mom sent to Stehekin for me.  I got it right when I needed it.  With the liner, I felt comfortable, even though it was a chilly one.

I caught up to a few friends as they were leaving camp, and hiked with them to Hart’s Pass.  It was good to talk with them about the trip (another good “reflections on the trip” conversation), and the status of the wild fires back in California.  They had an excited energy.  There are a lot of different emotions out here right now, but I think many are extra friendly, positive, happy, especially present, because they know the trip will be ending soon.

Last night, a few were talking about how they will greet the border, the northern terminus of the trail.  Many expect to cry, or say they’ve had tearful moments already.

One said to another’s stoicism, “You know it’s okay to cry, right?”  And another hiker laughed and said, “I tell him that every night before we go to sleep.”

There are a lot of emotions out there, and different ways of handling them, in this most beautiful of final days.

At Hart’s Pass, we caught up to a sizable crew of hikers relaxing in the sun, eating snacks, drying out gear.  It was a comfortable setting, no one in a rush.  I sat and ate a few snacks, chatted with some hikers nearby.  One hiker had just finished (had hiked to the monument and then the 30 miles back to this parking area, where you must return to catch a hitch to the nearest town), and was sitting there with the rest of us, not in a hurry to go anywhere.  We asked him about his plans now, what it had been like to finish.

After an hour or more of relaxing, several of my friends shouldered their packs and headed toward the trail again, waving goodbyes.  I waved to them as they left, not quite packed up myself yet, and one of them smiled and said, “You’re coming with us, Old Soul.”  It was nice, inclusive.  I managed to catch up to them.  It was touching to see this line of hikers ahead of me, heading up into a beautiful expanse of yellow mountainside, all chatting merrily together.

One hiker that had stayed behind caught up to me then, and we had another end-of-the-trip conversation, sharing thoughts.  In a few miles, we hiked up to the rest of the group, sitting at a beautiful site in the sun, surrounded by reds and golds, eating lunch.

One of the hikers was quiet over that lunch break, brooding and looking down at his map.  Another hiker reached for his camera and aimed it at the quiet hiker, who stared strongly back for the picture.  No smile, but a kind of pride there.  The photographer snapped his photo and said, simply, “My muse.”  A humorous moment, a few of us laughed if we dared.

Enough happy-go-lucky in this group to give the brooders some space and acceptance.

I enjoyed hiking the rest of the day.  It was broken up by congratulating the thru hikers who had touched the monument, and now hiked past on their way back to Hart’s Pass.  I met several I had known, and many I never knew.  I often asked them their names, and then recognized them from their place in stories from other hikers.  So many connections.

One couple told me that they’d just finished listening to the entire Bible!  They’d split up the amount of listening per day according to an algorithm, based on the number of miles they hiked.  I thought that was neat, that they had heard it all relatively continuously, in the kind of context that most of us lose, who read it piecemeal.  And that they added their own personal twist to make good use of their time out here. 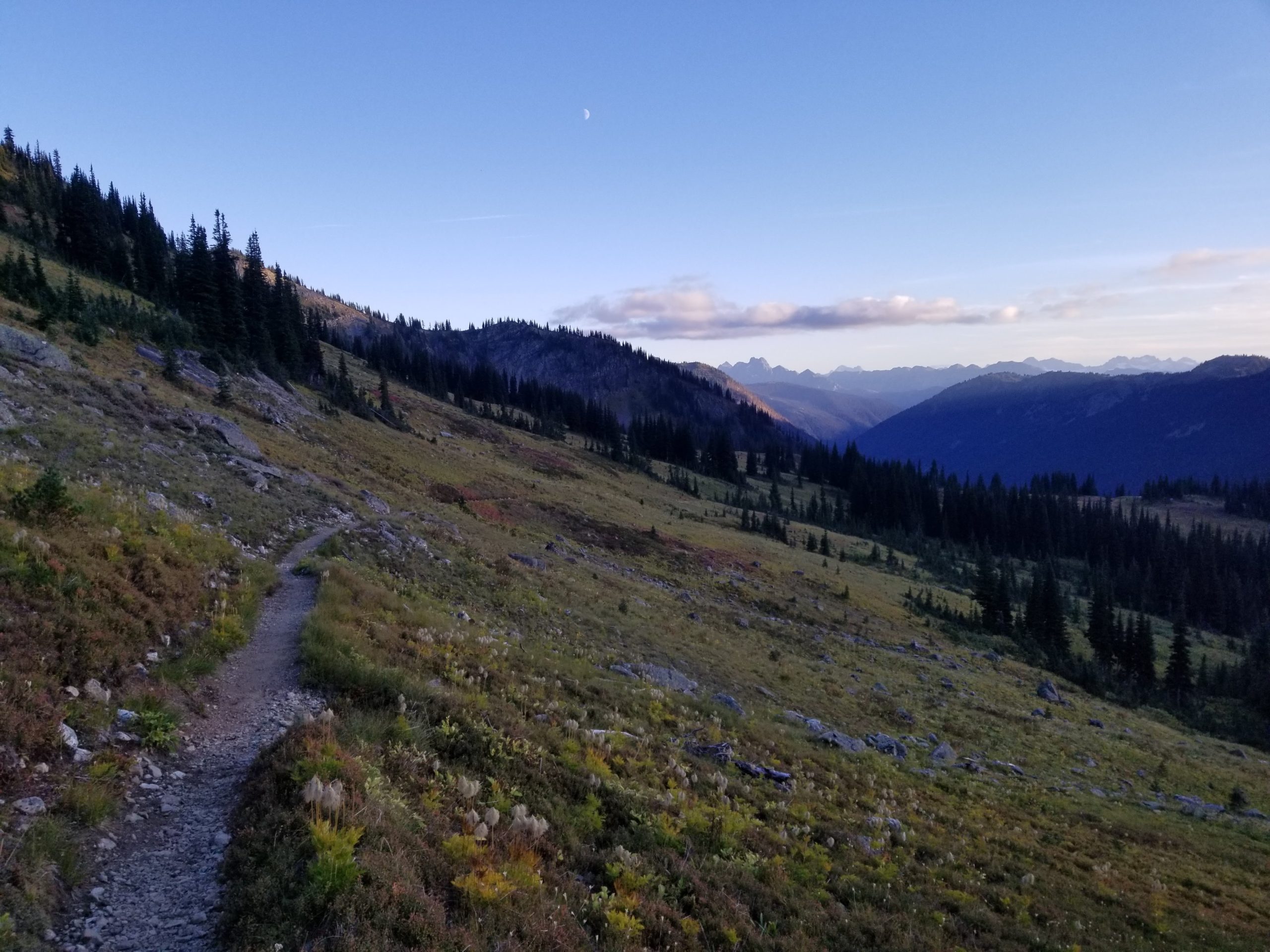 A lot of thinking today, about how the trail is ending, this will no longer be my routine, I’ll miss this, but also about all I look forward to, in returning home.  Dwelling in the sad, some.  I’ll miss the peace and beauty and purity and solitude of this, of simply sitting in the woods, eating a snack.

I walked up to Rock Pass and found the group camping here.  We all crawled into our tents by 745p, because it was so cold out!  Beautiful half moon, stars, crags all around.  I remember admiring another starry sky way back, looking out at Shasta…the nostalgia-enhanced memories begin!

I hiked the Appalachian Trail northbound in 2017. I ended that trip with a love for backpacking, and have only grown more fond of it since then. I will be hiking the Pacific Crest Trail in April 2021. I will start in southern California and hike northward. Hoping to share some of that experience with you through this blog!