While we technically had begun hiking in the Sierra Nevada range just after Tehachapi at mile 566, it didn’t feel official until we left Kennedy Meadows at mile 702.

It was the evening and we had just spent 24 hours at Grumpy Bear’s, a hiker-friendly restaurant and hangout down the road from the general store. After downing a cheese pizza and somehow fitting all of our gear in our packs with our newly acquired bear canisters, we headed back to the trail. Unfortunately, it took us almost 45 minutes to get a ride back to the trail from Grumpy Bear’s, so that put us back in a bit on our planned mileage for the day.

We hiked about seven miles out of Kennedy Meadows, passing several campers at the nearby campground out for Memorial Day weekend. I would lie if I said I wasn’t imagining myself in the luxury of a camper for the weekend with nowhere to go and nothing to do but relax along the Kern River with friends and family. 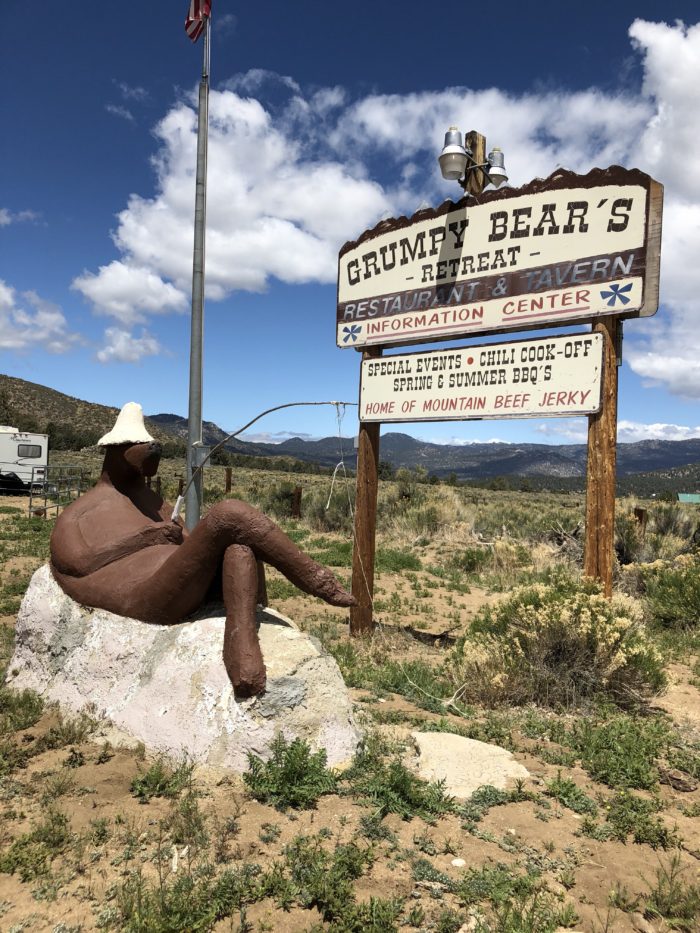 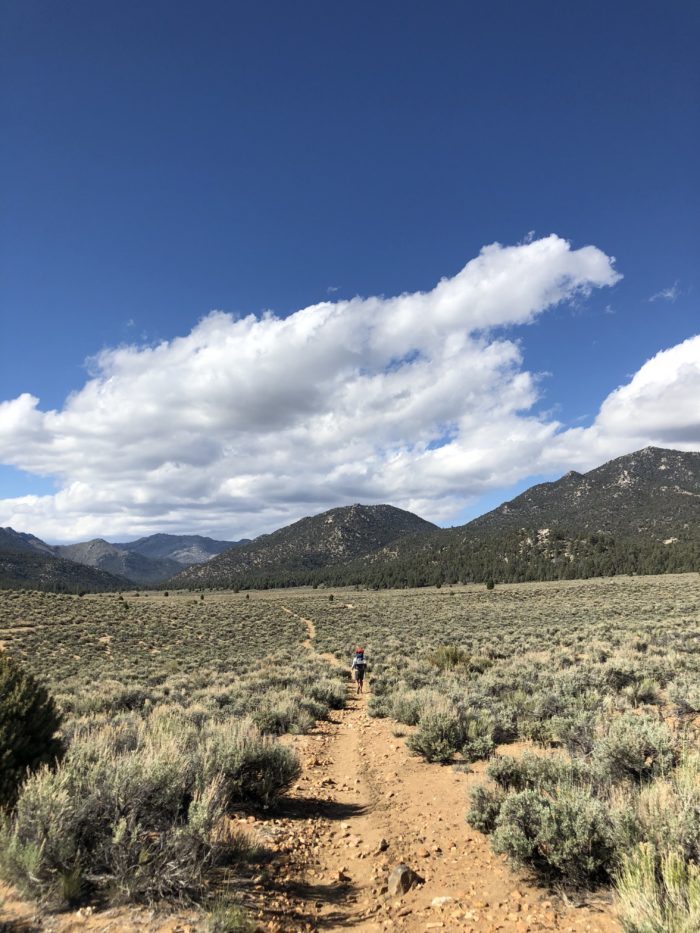 After our short day, I didn’t sleep well that night. I’m not sure if it was the brightness of the moon flooding through our tent or the anticipation of what lies ahead. The next morning came early and it took us longer to pack up our things with our new setups. Previously, I had packed my food bag on top of all of my other gear, so I could literally pack up everything in the tent except my food bag (and the tent, of course), eat, brush my teeth, and be ready to go. Now the bear canister full of food goes in the bottom of my pack since it’s so bulky and heavy. We technically don’t need our canisters until after Lone Pine; however, when we had our Sierra gear sent from home, we weren’t sure if we would be going into Lone Pine or not, so a Kennedy Meadows send it would be.

We had a couple of really cool wildlife sightings this day as well. We took our morning snack break at a bridge over the South Fork of the Kern River. Underneath the bridge were a hundred or so swallows, some in nests and others noisily fetching food and bringing it back to the nest for what I assume were their young, too new to fly out of the nest. It was loud, beautiful, and captivating to lock in on a single bird and watch it fly from the nest, loop around the bridge, back to the nest, and immediately fly in another direction in search of food. It was amazing to see many of the swallows take the same flight route around and around the bridge, back and forth, back and forth. 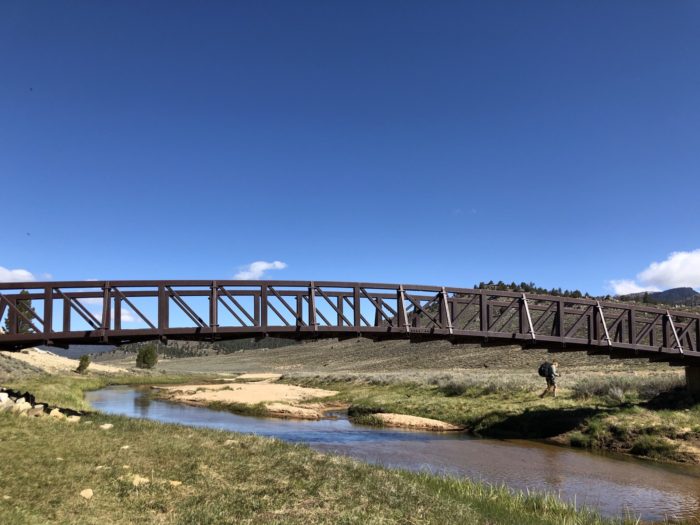 At our lunch spot, a friendly marmot resident ran beneath the rocks as we arrived. He was skeptical at first, but soon returned to his spot under a nearby tree, munching on a snack and catching our eyes every minute or so. 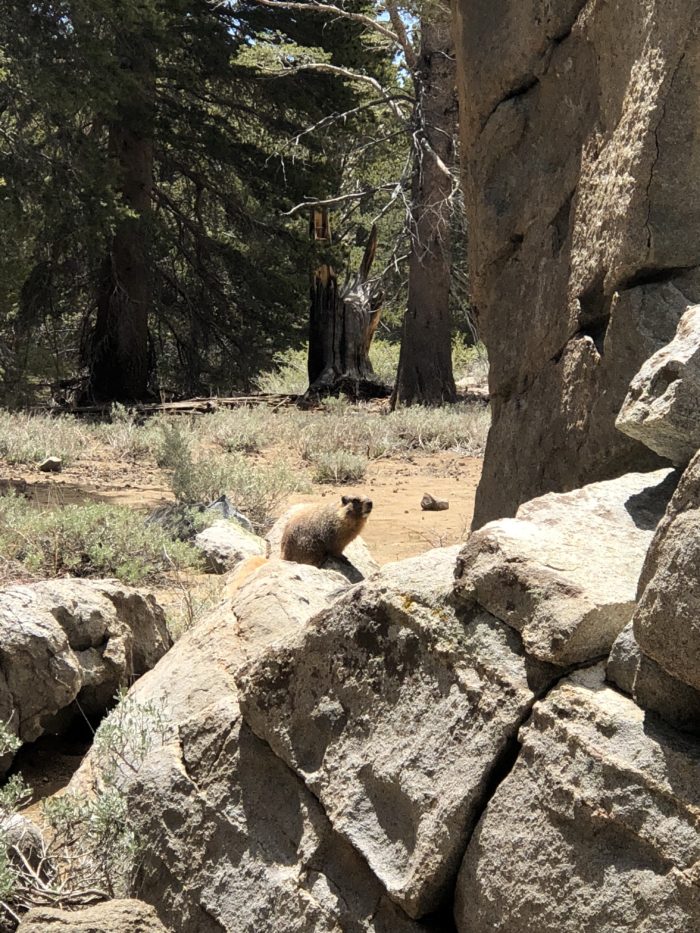 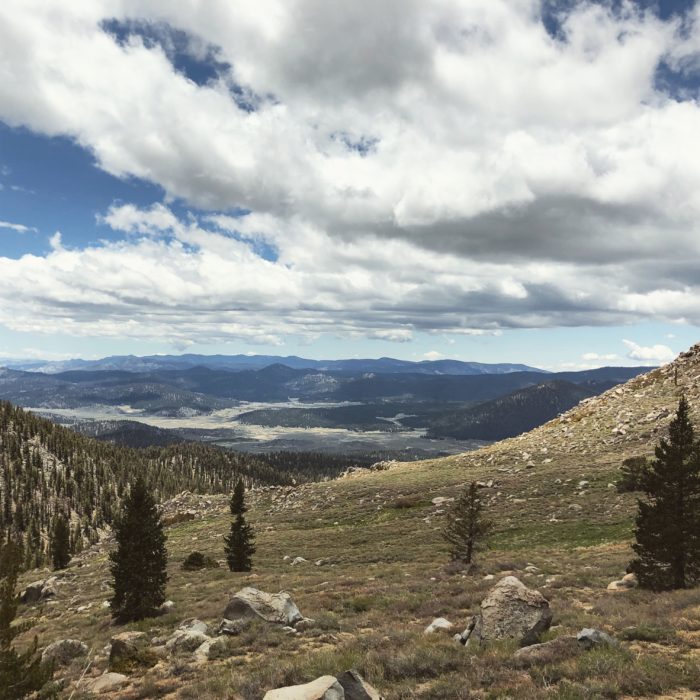 As we descended from our lunch stop, snowflakes began to fall. After almost 50 days of basically no precipitation, it was clear that we were not in Southern California anymore. As we hiked farther down the mountain, it turned to a light rain. Thankfully, we weren’t far from our camp spot for the night, so we were able to set up our tent before it really began raining. Setting up in the rain was very much reminiscent of our Appalachian Trail thru-hike, one of the rainiest thru-hike seasons on record. We know that the dry stretch that we’ve had will not be the norm as we move farther north, so it’s about damn time we get used to the rain, snow, and cold once more. At least for the next few hundred miles. 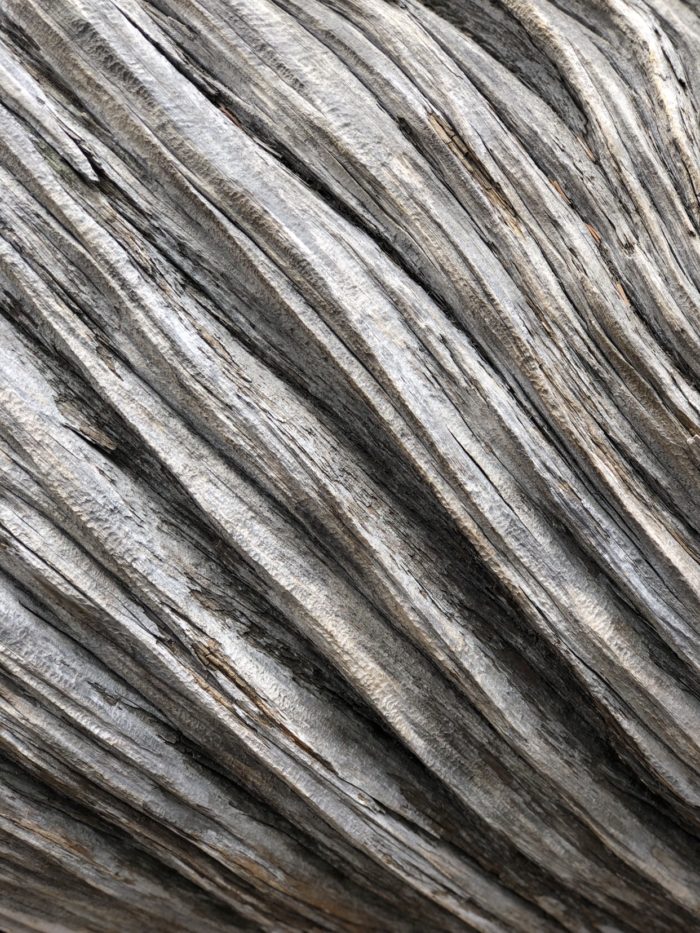 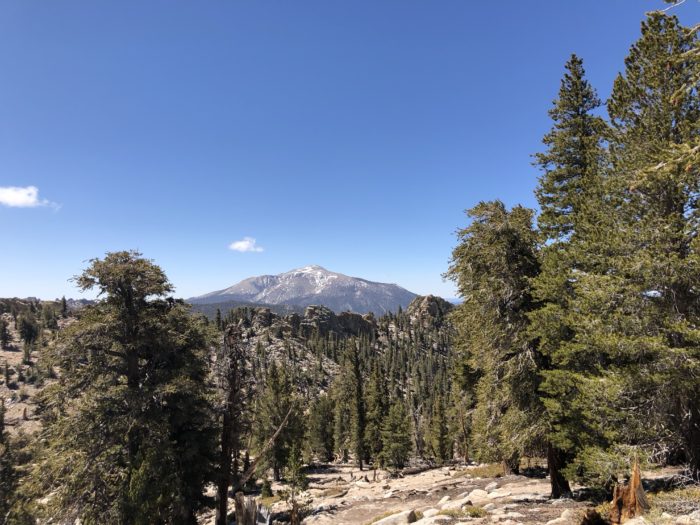 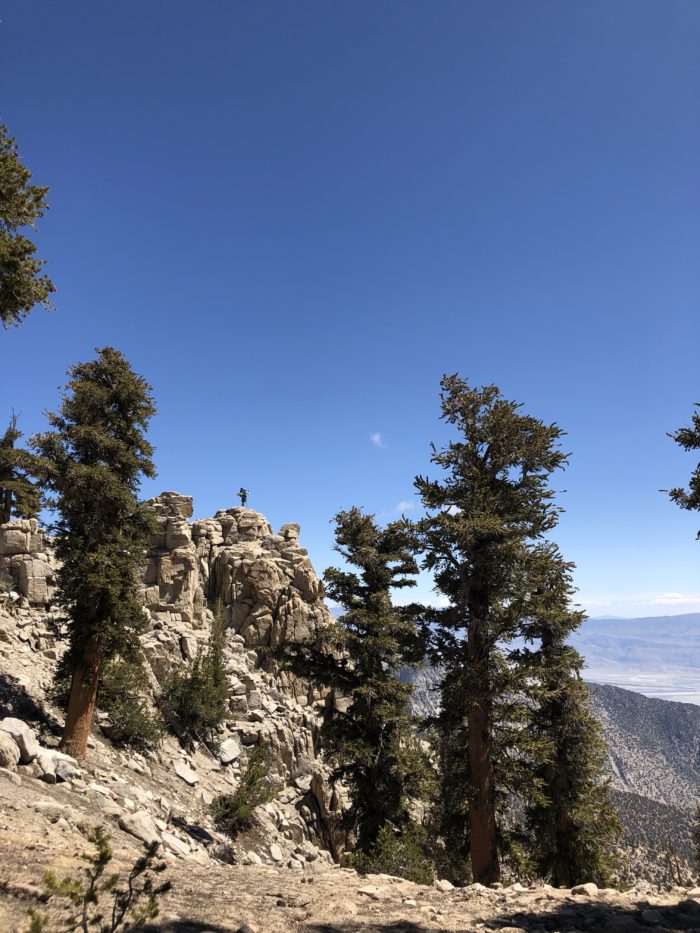 At 9,000 feet, it was a below-freezing night of tenting. When we zipped ourselves out of our tent the next morning, the ice flew off our rain fly. We slept in a bit and had our latest start on-trail yet at almost 8 a.m. We had originally planned to do only 15 miles and then hike down to Horseshoe Meadow with access to Lone Pine the following morning. However, being Memorial Day, we figured we would have a better chance of getting a ride today rather than the day after.

Thankfully, we were right. We ran into a couple of day hikers, Mike and Anna, in the beautiful meadow about to end their day and they offered us a ride. The ride into Lone Pine was absolutely stunning as we descended 7,000 feet along four massive switchbacks in their SUV on the Civilian Conservation Corps-built road. Mike told us that a crew has to clear the road of rocks every single day as they fall off the mountain. There were no guardrails along the road and it reminded me of the steep roads along the Amalfi Coast in Italy.

Mike is a geologist and told us all about the Owens Valley and the alkaline dust problem the area has due to the drying up of the Owens Lake for use in the Los Angeles Aqueduct. It’s a huge environmental problem for the area and there have been lawsuits back and forth for years. 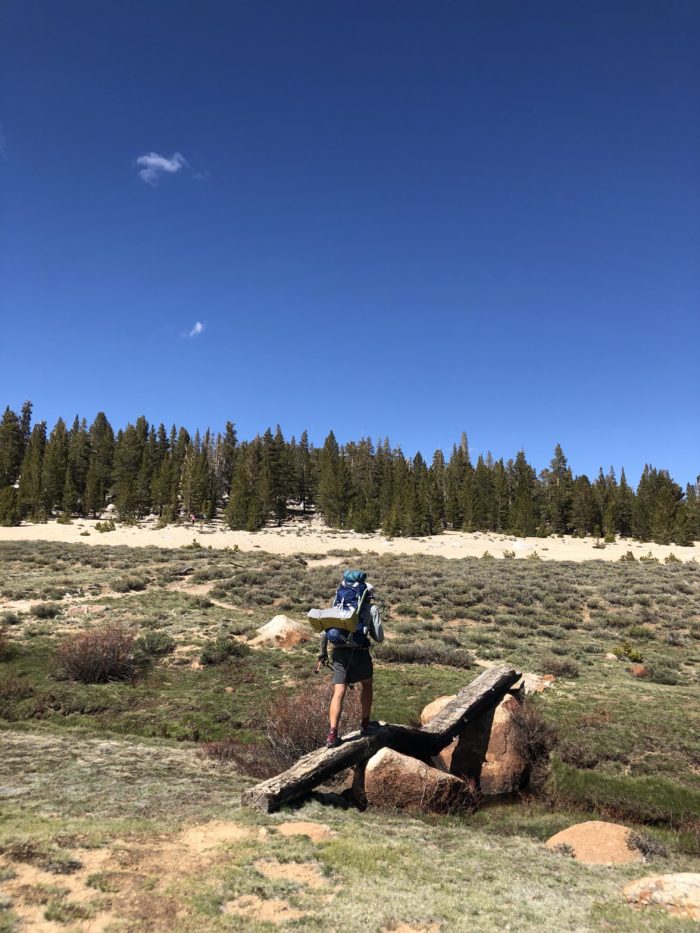 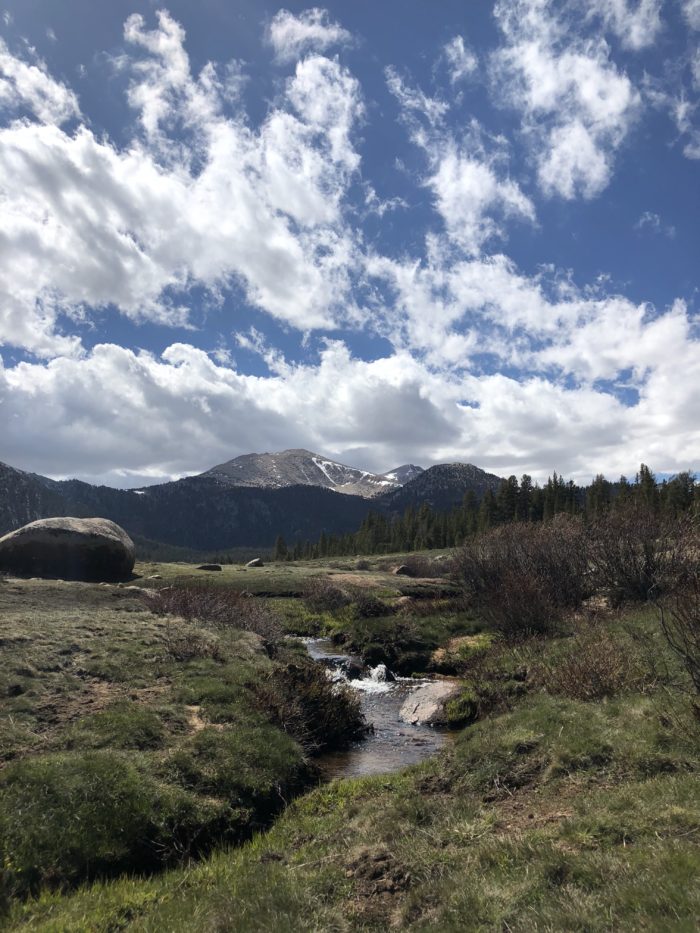 We originally planned to take a zero in Kennedy Meadows, but I am so glad that we switched our zero to Lone Pine. The town is super hiker-friendly and everything is close together. We were able to get dinner while waiting for our laundry at the laundromat just a minute’s walk down the road. Our first night in town, we jumped in the pool at our motel, the Motel Dow Villa, and then relaxed in the hot tub as we gazed up at the heights of Mt. Whitney, which we would be attempting to summit in just a few days.

Our zero day was a perfect balance of town chores and relaxation. We had excellent cinnamon french toast at the Alabama Hills Cafe, resupplied at the hostel store and the local grocery store, and bought a few new gear items. We both were a bit cold the other night and morning up at 9,000 feet, so for piece of mind we both added a fleece layer to our packs. I picked up a new container of sunscreen (think snow burn) and some KT tape (I continue to tape my right foot). We also finally decided to buy a smaller and lighter cookset. Our current GSI Outdoors Microdualist is way too big, and with the added Sierra gear was taking up too much room in Miles’ pack. Our Snow Peak setup is so much lighter and compact. We will send our other pot back home in case it’s needed for future hikes. 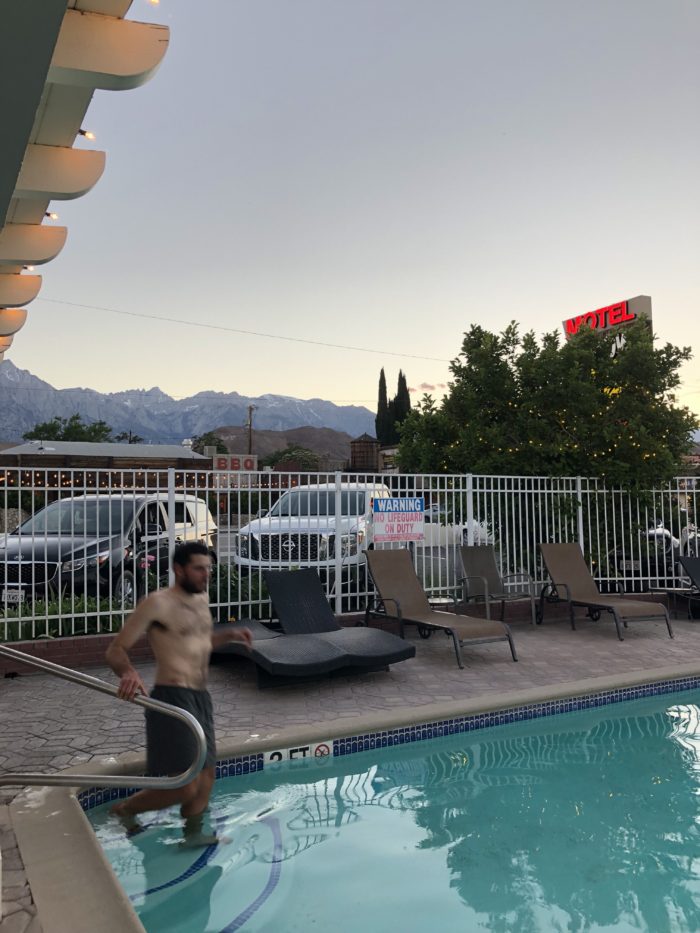 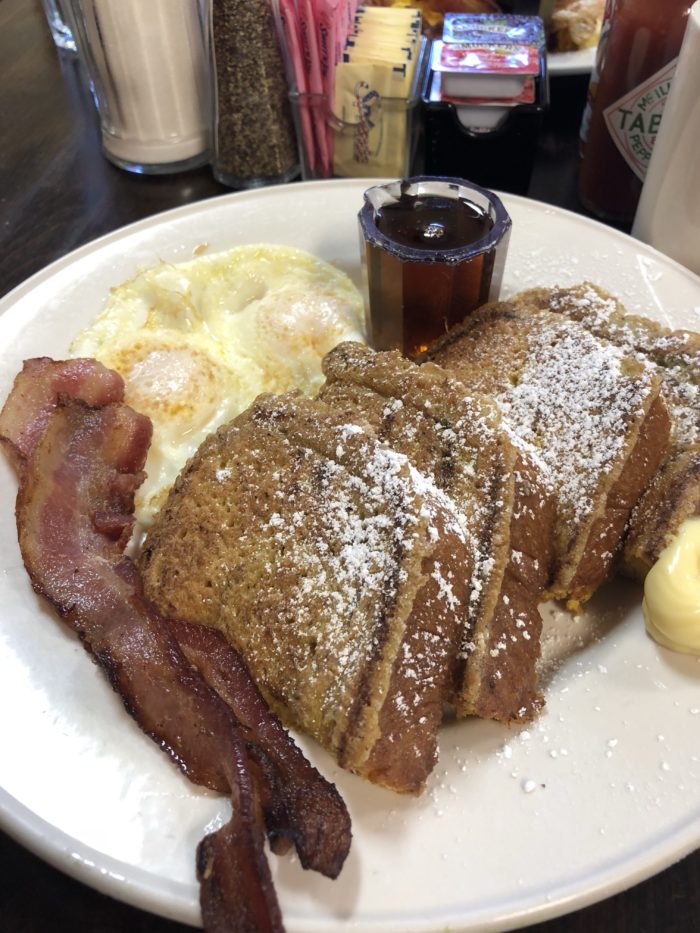 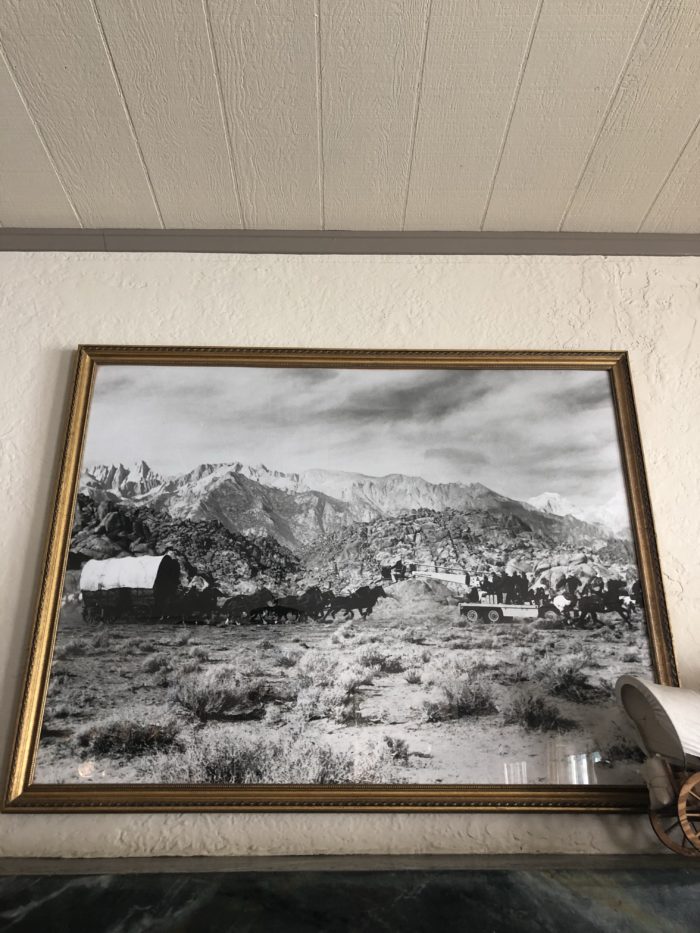 After our zero day, we are all ready to go for an exciting stretch of trail – taking us off-trail for a day to summit the highest peak in the lower 48, Mt. Whitney, and up and over the highest point on the PCT, Forester Pass! Here’s to hoping that we’ll be warm enough and prepared enough to tackle this section of the PCT.