Nothing of Note? Yes and No

I thought I was going to do a daily post! On the trail! Foolish lady. I actually find the daily posts quite boring because – and this could prove mildly upsetting to those of you on the precipice of your premiere promenade – nothing really happens most of the time out here! Makes for great hiking, lovely days, and boring reading.

It’s funny, though. I’ve read plenty of articles and long IG captions over the years about the first weeks on trail and was awestruck at the amount of drama everyone seemed to be having. Raging winds, whipping across cheeks and cutting like knives! Blazing sun, destroying skin, knocking hikers to their knees and making them resort to night hiking. And the frigid temps! Icicles on tents to rival those of Everest Base Camp! I read these trials and tribulations with trepidation bordering on terror. It’s a wonder anyone completes this damn thing!

On trail, none of these conditions have materialized – yet? – which makes me think that the problem is not wind or sun or snow but hyperbole, coupled with the all-American need to convey suffering when suffering is not actually happening. Kind of like how rich people insist they’re not rich rich because they had a job that one summer as a teenager, or had to go to Vail instead of Switzerland.

This isn’t to say the PCT doesn’t have challenging moments. The heat does present an obstacle, particularly during the middle of the day. Water is heavy and several carries have approached 20 miles. But in the desert, the trail is maintained and manicured like a botanical garden. There are frequent towns – in the first seven days/117 miles, I’ve hit up Lake Morena, Mount Laguna, Ranchita, and Warner Springs – tons of people, gradual elevation changes, and ample shade. Plus garbage cans! And flushing toilets in campgrounds! And picnic tables! AND WATER CACHES! In other words, the moments of misery are mere specks on a canvas of ease and beauty, a thin sandy carpet that’s rolled out in front of us. For the moment, it’s simple.

I woke up on the third day to noisy winds around 4:30 and wondered how in the hell my thrice-repaired, six-year-old tent seemed to be just chilling in the breeze, flapping slightly but otherwise intact. I lay on my thick-ass sleeping pad and giggled to myself. It felt like I was floating in an outer space sandstorm. What a strange way to spend a summer, no?

In life, I poop every day around 7:02. I don’t know why; I don’t know how; I just do. At home, abroad, in town, or in the woods, I am a very regular person. The mere sound of water boiling for coffee sends me running for the bathroom. I eat well; I often have what people call “ghost poops,” meaning the paper is clean. Very LNT-friendly; no trace indeed.

At the risk of over-sharing on the internet, my main physical issue on this trail thus far has not been muscular or mental but gastrointestinal, and it’s not that I’ve gone too many times but too few. I was able to eke out a lentil-esque entity the night before starting, and on the second night, after an air expulsion that made me wonder if I was going to get removed from the trail, I excreted what would be a small amount for an infant. The last time I legitimately went to the bathroom was Sunday morning; as it was Thursday, I was concerned for what was going to transpire when whatever was going to come out eventually did.

I left camp early and alone, enjoying a cool morning jaunt of eight miles down the road to Mount Laguna. I ambled into a French restaurant, where I had coffee and a legitimate croissant. WHAT? They had a flushing toilet. OMG. It was like riding a bike. I left a large tip.

The next day, I woke up early with the sun, made a foamy vanilla latte a.k.a. instant coffee with a vanilla Breakfast Essential. Shaken and cold, it sent me straight to the “facilities” at 6:02, an hour ahead of schedule. There was plenty of space with legitimate dirt that allowed me to dig over six inches – which and I was happy to have a successful shit. Sorry not sorry.

The subsequent morning was –  shocker – beautiful and vast. The sun rose slowly and shadows covered the trail so started walking in a cool morning breeze for a few miles. I stopped at ample water sources throughout the first 12 miles and thus didn’t struggle with the 11 pounds of liquid that I’d had on the first day. While I’m sure I’ll have to do it many more times, I shan’t be doing it when it’s not necessary.

I only encountered one other hiker in the first 12 miles and was left alone with my thoughts for the first half of the day. I always hear people say how hard it is to be alone with their thoughts, that they mull over their life decisions, replay crucial relationship moments where it all went wrong, agonize over what they said or didn’t say. There’s a little of this, sure, but I’d say 90% of my thoughts – which manifest as actual out-loud sentences – involve me yelling, cooing, and flirting with admiration at the wildflowers and other flora.

And that doesn’t even address the sweeping vantage points from lazily looping switchbacks that serve to make you feel so teeny tiny. Truly, every time the trail wound around another mountainside and changed direction, I shook my head in disbelief. Do I deserve to be here? Is this really happening? 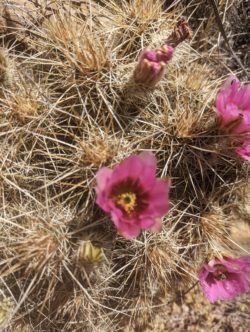