Days Fifteen to Nineteen on the PCT: Cabazon to Big Bear Lake

Since checkout wasn’t until 11 AM, we took full advantage of this and slept in. While I was packing up, I found my old tent stakes at the bottom of my pack below my trash bag liner. I’d been carrying two sets of tent stakes for no reason, no wonder my pack was so heavy! We stopped at the post office to mail our microspikes ahead to Wrightwood, and I mailed my extra set of tent stakes home.

We decided to meet Godiva at the Cabazon Dinosaurs and then go to the casino to see if we could win big and pay for a hotel room for the night. After the dinosaurs, I ate some delicious pizza, lost 5 bucks in the slot machines, and Frisky played blackjack. I was super bummed because there was a taco festival the following Saturday at the casino that we would be missing. I’d been a day early for the taco fest in San Diego, a few hours early for the tacos in Warner Springs, and a week early for this one. That’s some bad taco luck. 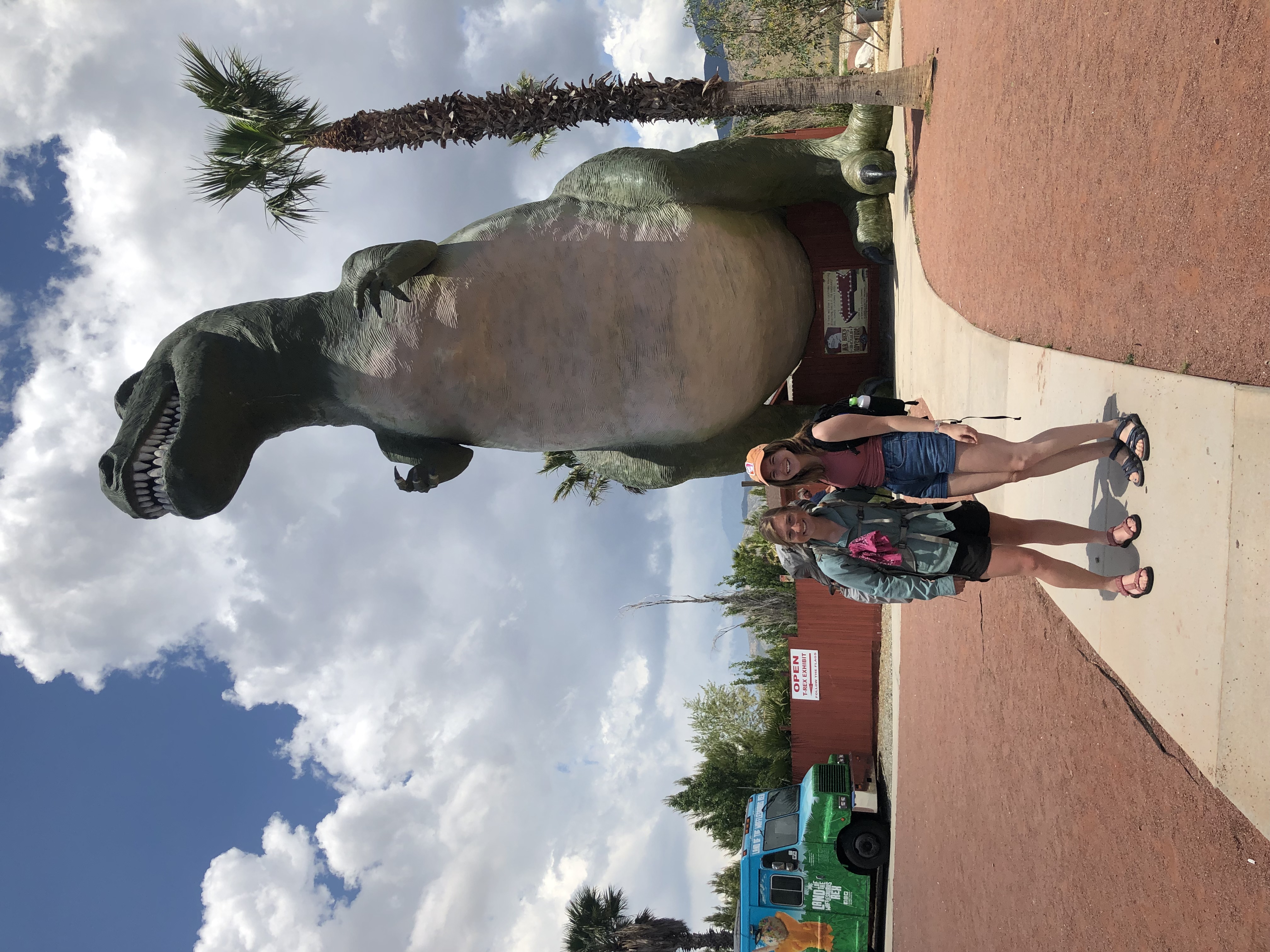 Met up with Godiva at the Cabazon Dinosaurs

Since we didn’t win big at the casino, we had to head back to the trail. Godiva hiked with us for a few miles until we ran into trail magic from Papa Bear (a trail angel Frisky and I met in Mount Laguna). We were really tempted to turn around and go back to Palm Springs with Godiva, but figured it was best to keep moving forward. After 4 miles, we found a nice spot next to a cactus to set up camp. We were near a giant wind farm and joked that the sounds from the windmills would hypnotize us into getting off trail and going to work at the wind farm the next morning. Janet and Luke had hiked out earlier that morning so they were a few miles ahead of us. Andrew and Kate were staying in town for another night, so we all planned to meet up in Big Bear Lake in a few days. 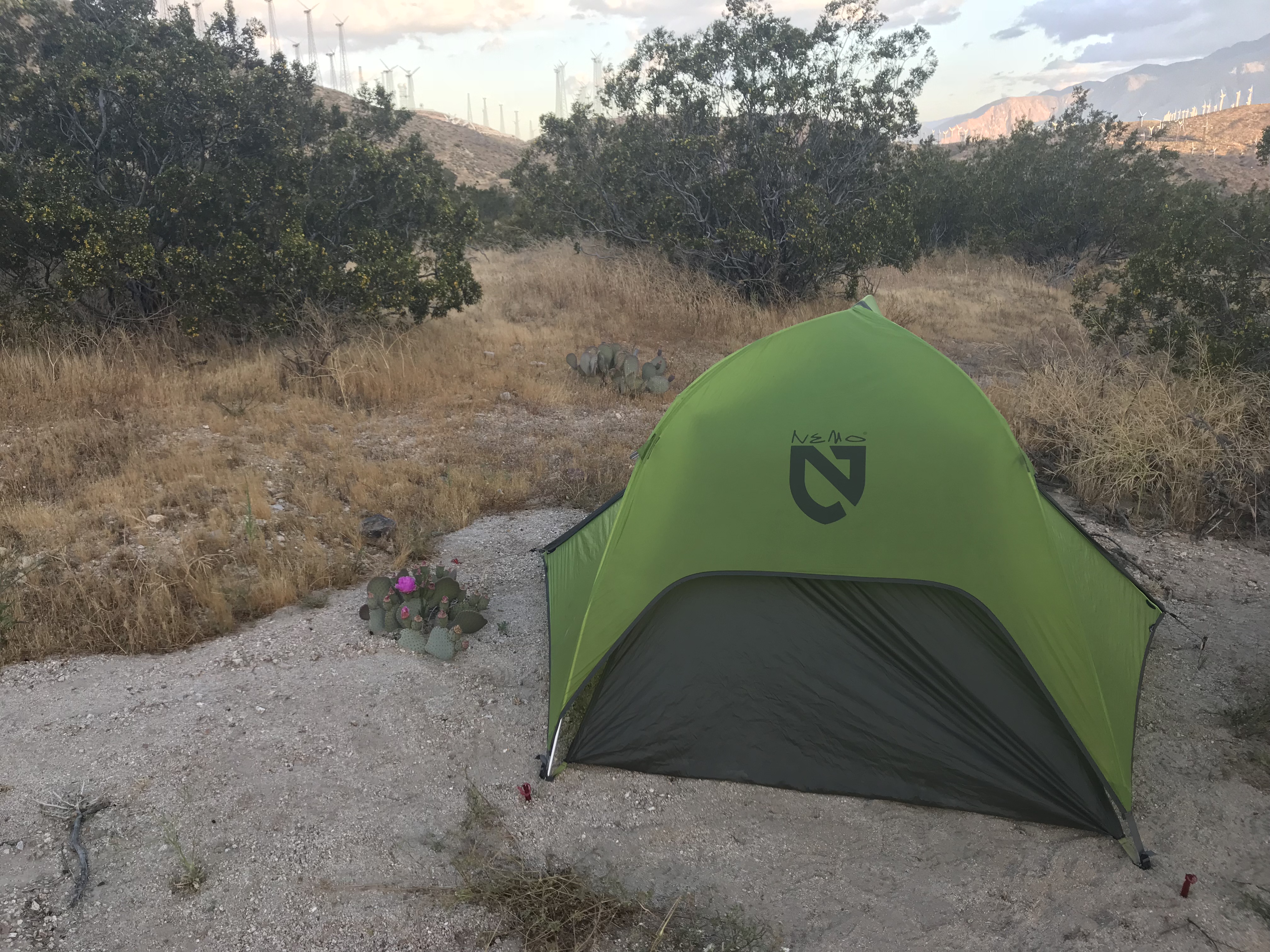 I wish every campsite had a cactus like this

We had descended down to around 1,000 feet to go into Cabazon but now it was time to climb back up to 8,000 again. I joked that the trail towns along the PCT should relocate to a higher elevation, since it’s tough to do a climb after a fresh resupply and heavy pack!

A few miles into the day we discovered we made a wrong turn when we found a dead cow in the middle of the “trail.” We realized we were on a dirt road rather than the PCT and quickly retraced our steps. Since we were in between the “bubbles” of the thru hikers that we knew, we met some new people throughout the day. Stumped as to what to tell them my name was, I just told them Liz. “Identity Crisis” is seeming more and more fitting.

At the top of the first climb, I overheard a guy ask Frisky what our daily mileage was. I was pretty confused why that would be the first question another thru-hiker would ask us, but soon found out they were just out for the day. Since the guy also had Altras we chatted for a bit about how we’re liking them so far. Even though my feet still hurt, I am liking them much better than my Solomon’s.

We had been seeing signs along the trail that the Whitewater Preserve was closed due to flooding. We had the option of going around to avoid the water crossing but decided to stay on the PCT. The water crossing wasn’t too bad but I was so excited to have made it across that I slipped at the very end. We stopped for a quick break to dry out our shoes and demolish some snacks. I could have stayed at that spot all day hit since we wanted to make it to 18 miles, we had to keep hiking.

I’ve found my favorite hiking strategy is to hike as many miles as I can before my “siesta.” After our siesta at mission creek, we had 6 miles to go before camp for the night. Unfortunately, these were some of the most challenging miles of trail so far since the trail crossed Mission Creek at least 13 times and was washed out. Frisky and I felt like we were in a game of Roller Coaster Tycoon: as soon as we were on the trail, someone would come pick us up and put us off trail again. After seeing a few good camp spots, we were tempted to cut our day short but pushed on to meet our mileage goal.

Happy to have gotten the Mission Creek navigation out of the way the previous day, we passed several section hikers going South Bound that asked us how the trail was. Our advice was to either keep your GPS out or give up on finding the trail and just follow the Creek.

At the last crossing of Mission Creek, I grabbed 5 liters of water since it would be a long dry stretch. I regretted it as soon as we started walking uphill and my backpack started squeaking from the added weight. I ended up still having 2 L when we got to the next water source but better safe than sorry!

After climbing up out of a canyon, we entered a pine forest. It was interesting to see the contrast of the burn area with the new growth. I put on an episode of the Backpacker Radio podcast to listen to until we found a nice spot looking back at Mt. San Jacinto for lunch. I wanted to camp right at the 250 mile mark so that’s what we did! 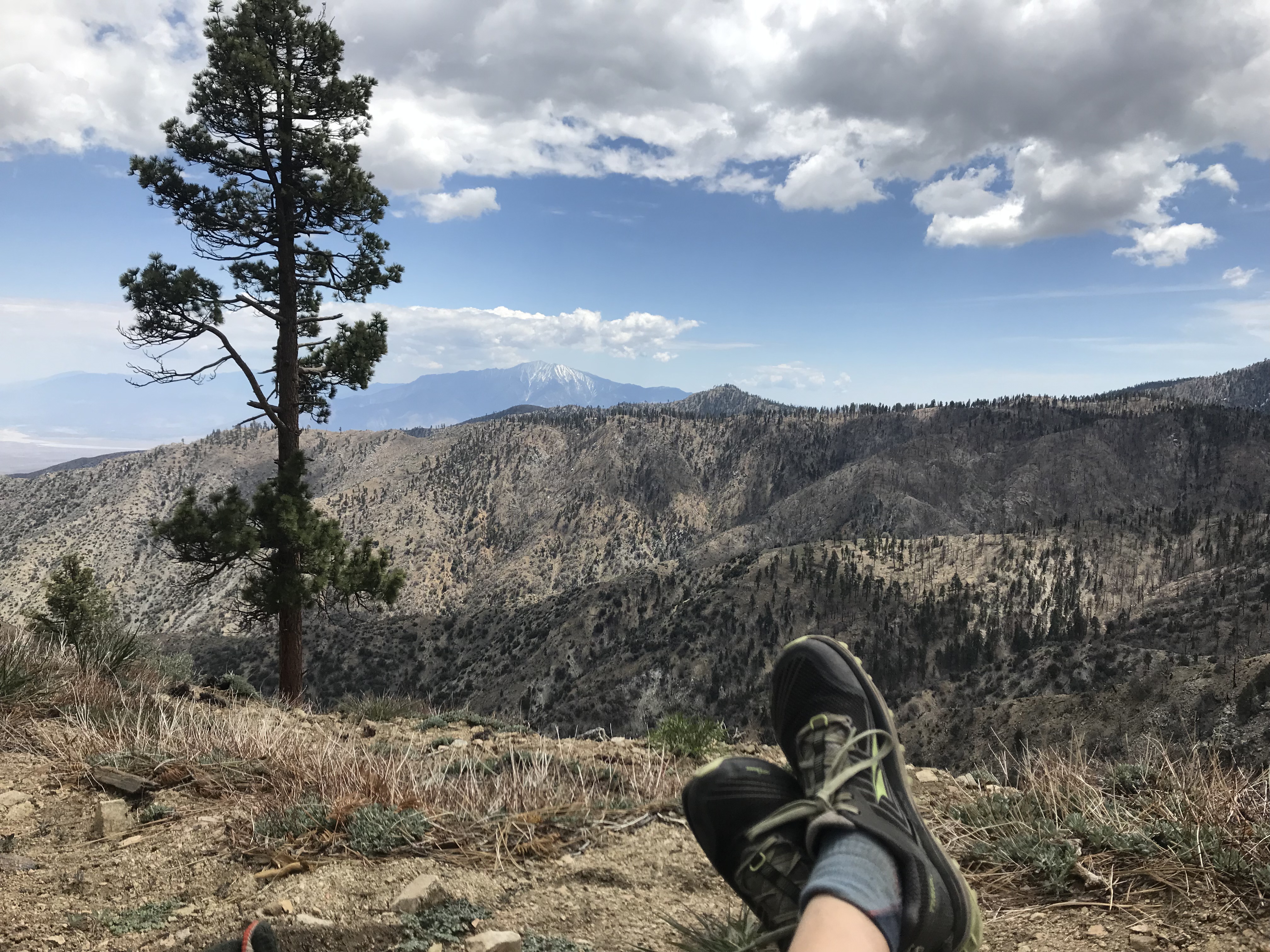 Looking back at San Jacinto

Our original plan was to hitch into Big Bear Lake and take a zero the following day, but my indecision was in full swing when Janet and Luke said they were considering hitching in from Mile 275 instead. Should we continue hiking to 275, hitch into big bear the following day, and nero rather than zero? Should we still hitch in from 266 and hike out the next afternoon? I decided to post on Facebook: indecision is going to be the death of me. I was also annoying myself so I could imagine that Frisky was also annoyed and wanted to stick to the original plan.

It turned out that all my indecision and worrying were for nothing since Janet and Luke decided it would be “too logistically challenging to hitch in from 275.” My spirits also lifted when we ran into Gables and Alaska Mark at the water source. Frisky and I had been hiking alone for a few days so it was nice to run into some of the homies.

At the road, we had a nice surprise when we saw Papa Bear at the road who offered us a cold Coors Lite and ride to the hostel in Big Bear Lake. I could feel myself getting hangry so I ate a clementine and apple to try to prolong it.

After taking a shower at the hostel, my hanger won out and I needed tacos. Frisky, Alaska Mark, and I went to Nuevo Vallarta and had the best tacos on trail so far. 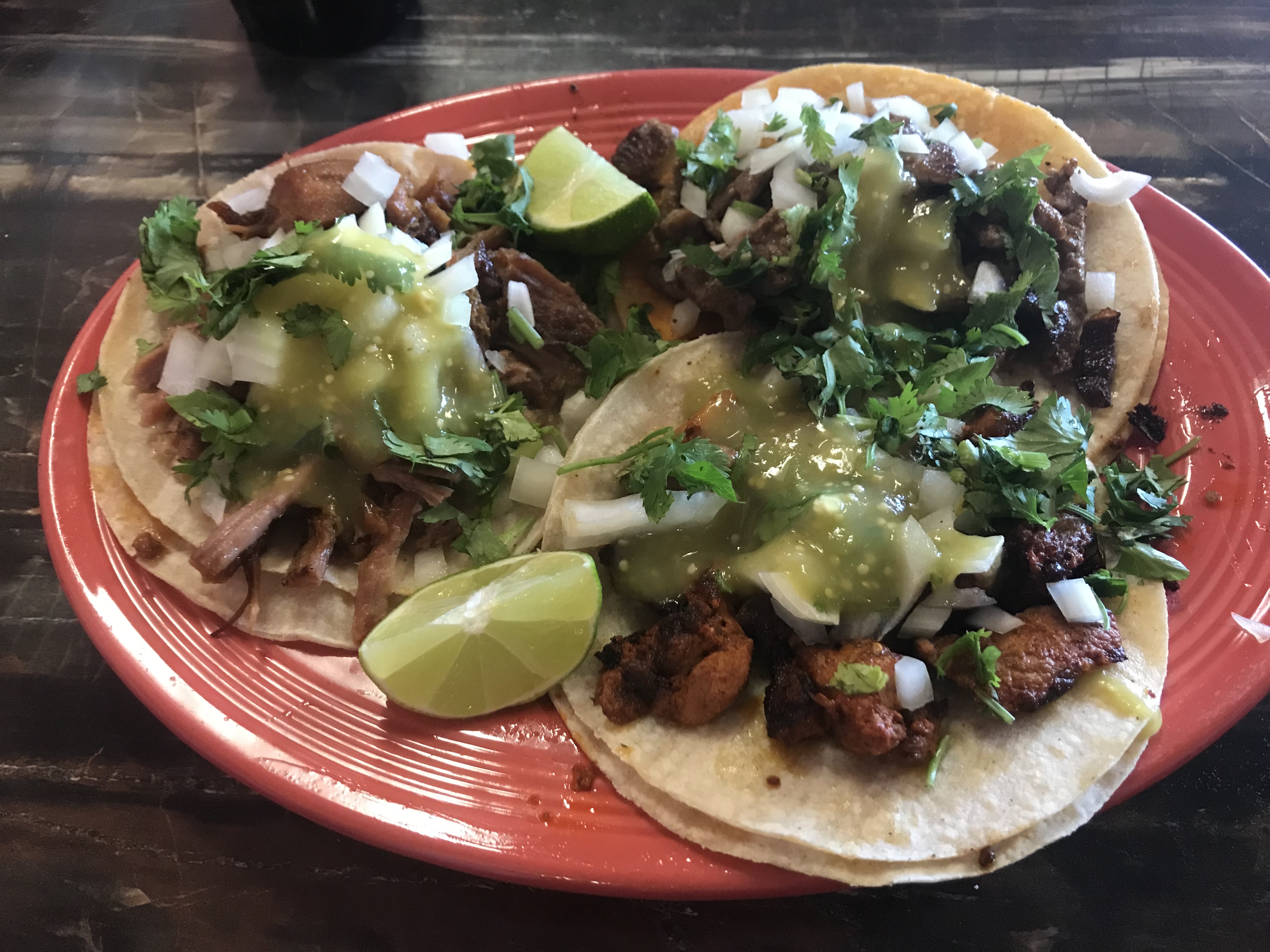 Best tacos on trail so far!

After meeting up with Andrew, Kate, and Honeystick at the hostel we started our “zero” day with some breakfast. Since we still had to resupply, we took the town bus to the Dollar Tree and Vons where I found some awesome sour gummy Llamas. Once the town chores were done Luke, Janet,  and Andrew started to watch Game of Thrones so the room was off limits for a few hours. I bought some beers and Frisky and I had an intense game of ping pong and football. I lost at both games, but I’m Not sure if I would have done any better if I didn’t drink the beers. Seems like we’ll have to have a rematch in a future trail town!