Days Six Through Ten on the PCT: Julian to Idyllwild

Started the morning with another shower and coffee before leaving Julian. We walked out of town to find a spot to hitchhike (my first hitch!) and met up with Mark. While we were disappointed that the Tesla didn’t pick us up, we were thankful for the nice lady that gave us a ride on her way to the highway. As we  waited, we wondered what sign our friend Woodpile had used on the hitch out of Julian: hiker to trail, don’t smell too bad, or won’t kill you. During the ride the woman got a call from her daughter, and she told her that she had three passengers in her truck but that we seemed nice. Since her daughter didn’t believe that her mom had picked up three hitchhikers, we all took turns saying hi.

Back at Scissors Crossing, it was 14 miles to the water cache so we started out with a nice heavy pack: five liters of water and a fresh resupply. We got back to the trail around 9 a.m., and it really started getting hot as we climbed uphill. Chris had gifted me this awesome fanny pack before he got off trail in Julian, so now I have to make sure it gets to Canada. 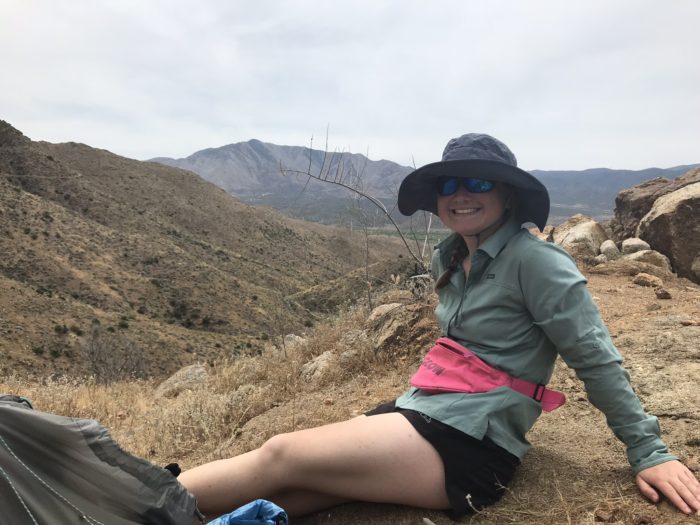 The bottoms of my feet had been hurting the last couple days, but the pain really hit me a mile away from the water cache. I tried to switch to walking in my Walmart camp sandals but was unsuccessful since my feet kept slipping around.

I ate some cold soaked ramen noodles (considering going stoveless) during our delightful two-hour break at the water cache, and we all debated the benefits of getting a donkey vs a llama for the PCT. Team Llama!

It was very tempting to camp for the night at the water cache, but I wanted to get a few more miles in to make the next day’s hike into Warner Springs a little shorter. Since it was now 6 p.m. the temperature was great for hiking, and we hiked another three miles to catch the sunset at our camp spot for the night. 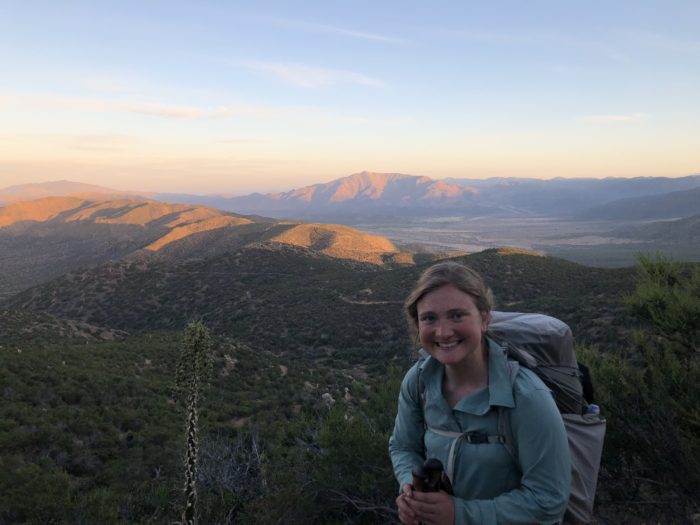 As we packed up camp in the morning, a lady (Laura) stepped out of her tent nearby and told me she had just been reading my blog on The Trek! We wondered if it was just a strange coincidence or if the internet somehow knew that I was camped nearby. 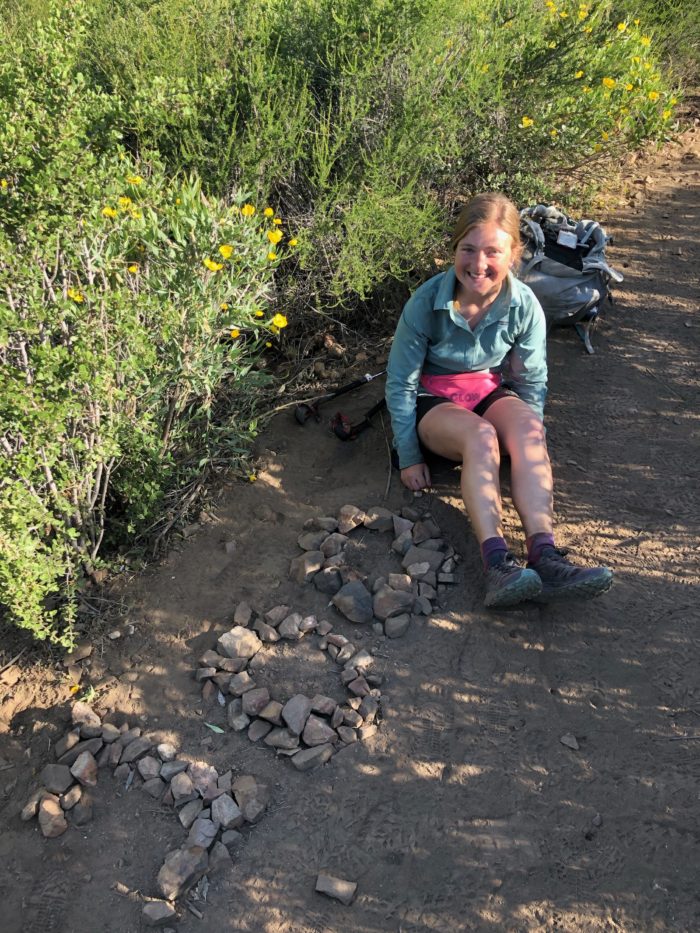 We continued on and found some trail magic from a couple whose son had thru-hiked the PCT the year before. After an apple, orange, and a bag of Fritos, we continued on to Eagle Rock. 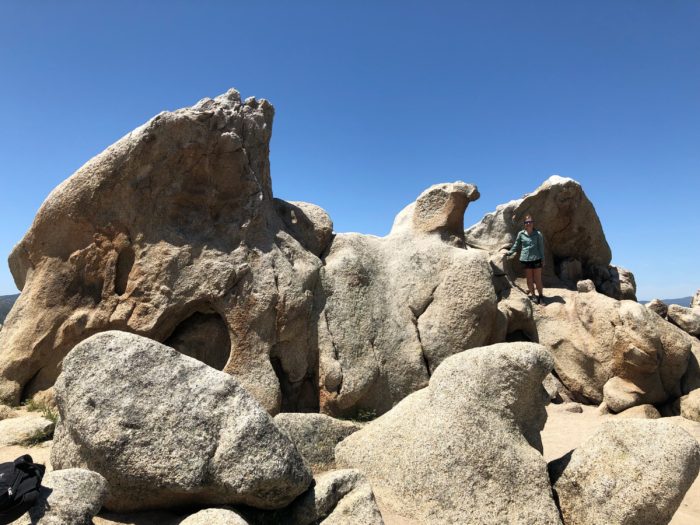 Anyone else get Fly Like An Eagle stuck in your head while hiking toward Eagle Rock?

The bottoms of my feet were really hurting the last two miles to Warner Springs, and I was really looking forward to the possibility of new shoes and meeting up with our “homies” that hiked out of Julian rather than stay the night. I thought about adding insoles to my shoes (Solomon Sense Ride Pros) but ended up switching to the Altra Timps. I was worried about getting blisters from switching shoes so I came up with my new mantra: No snakes, no blisters, no tears!

Before getting to Warner Springs we considered hiking out that night, but after catching back up to everyone decided to stay for a bucket shower, bucket laundry, and camping in the army of tents at the Community Center. 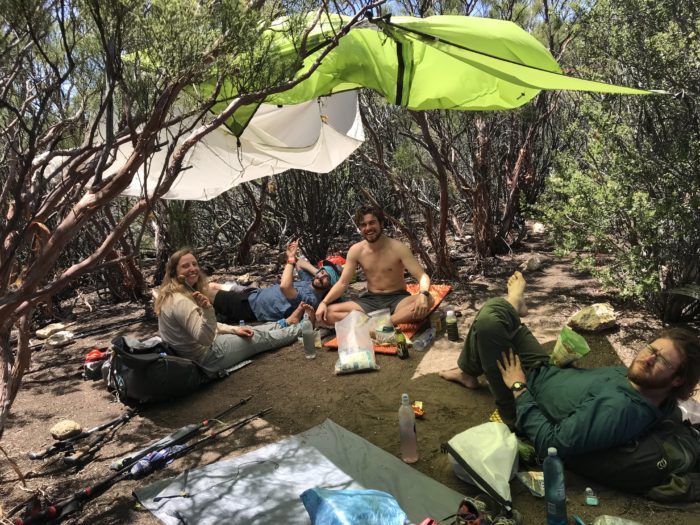 After hiking a 12 by 12, you gotta stop for a siesta fiesta.

There was a taco lunch at Warner Springs starting at noon that I really wanted to stay for but ended up hiking out at 6 in order to beat the heat. I also thought about paying someone a little extra to hike some tacos out for me. We met up with Andrew, Janet, and Luke and after hiking a 12 by 12 (12 miles by 12 p.m.), stopped for a siesta fiesta to take a break from the sun during the hottest part of the day.

Around 3 p.m. we hiked the last five miles to Mike’s Place, where I had my first Budweiser and some pizza. 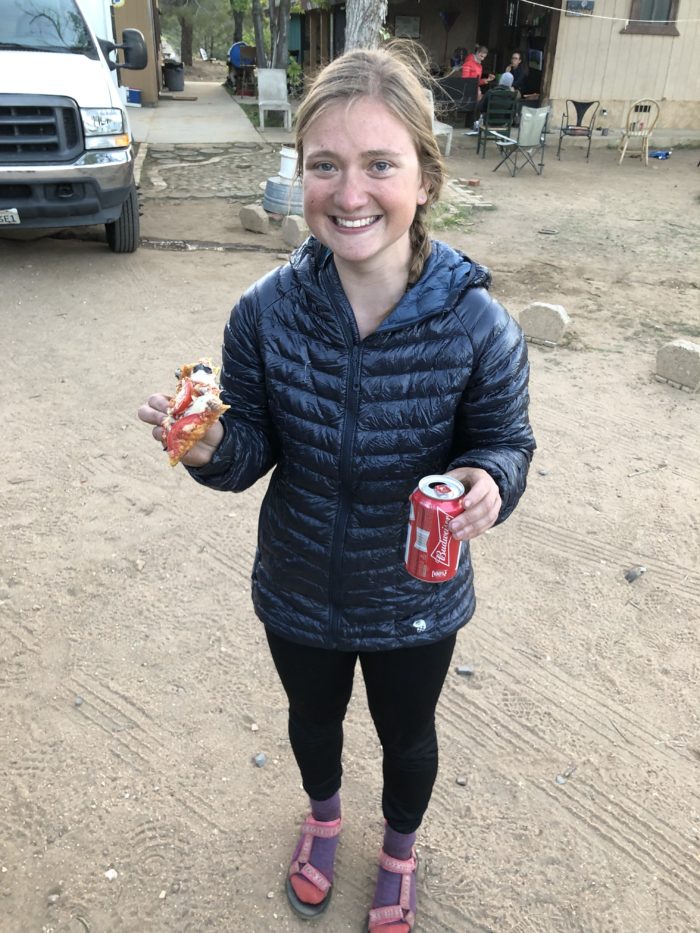 Drank my first Budweiser and ate some pizza at Mike’s Place.

Since it was supposed to be an 18-mile water carry, we left Mike’s Place around 5:30 a.m. However, since we ate too many of Mike’s beans, we wasted a lot of the morning taking breaks in the woods, or “taking a mike” as we now call it. Soon before our planned siesta break we found trail magic from Rypod, who thru-hiked last year, and I enjoyed a wonderful pink Gatorade. There’s been a surprising abundance of trail magic on the PCT, so thank you to everyone who’s helped us so far!

After finding a nice shady tree, we settled in for our afternoon siesta fiesta. We found it helps to break the day up into two shorter hikes, but it’s hard to get going after a nice siesta session.

Today was a nero day (six miles into Paradise Valley Cafe), so we all planned on “sleeping in” until 7 a.m. We woke up to some more rain/wind in the desert, but were motivated by the thought of town: coffee, food, showers, and laundry. 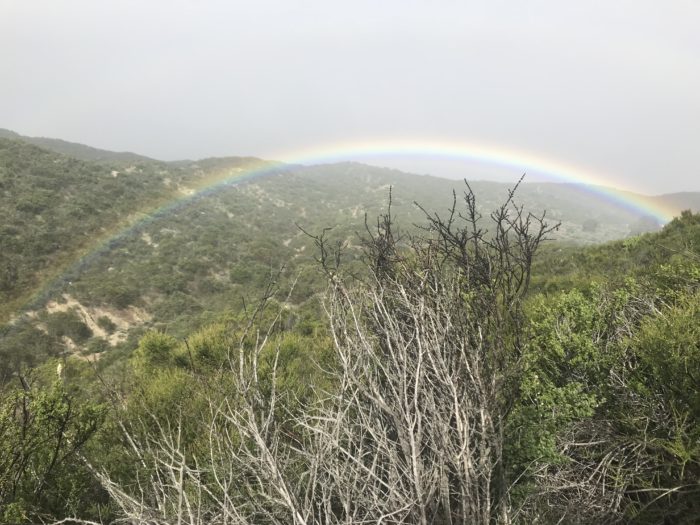 Found a rainbow on the hike in to Paradise Valley Cafe.

We met up with Andrew’s uncle at Paradise Valley Cafe and after getting fed and fully caffeinated, he generously gave us a ride into Idyllwild.

Once getting to town, there’s a list of things to get done: find a place to stay, shower, do laundry, go to the post office, get food for resupply, finish the blog, and find tacos! 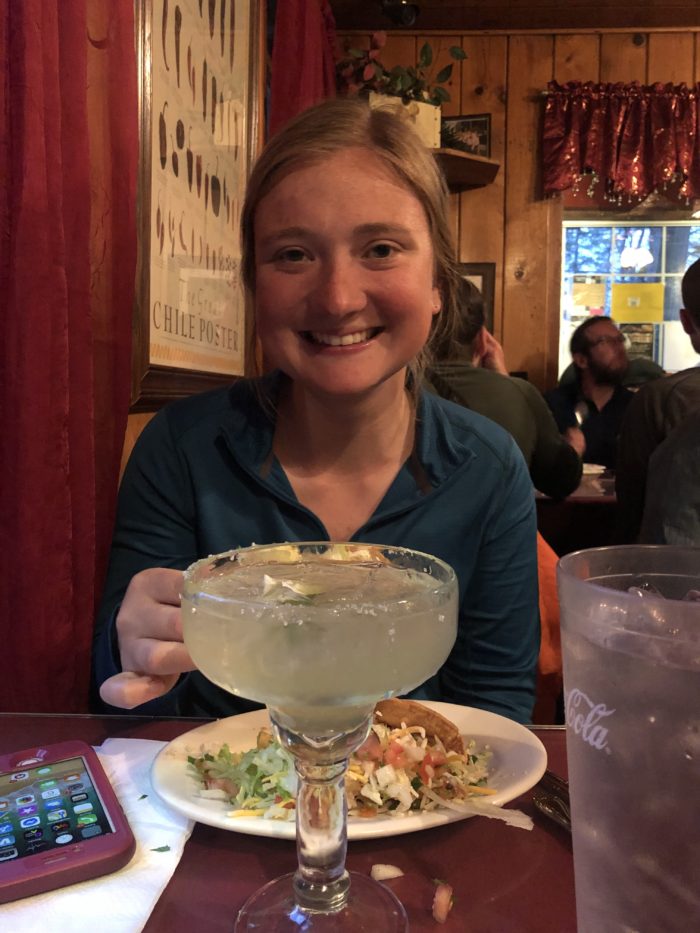