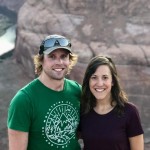 Pie and Some R&R Before Returning to the Desert

First off, let me start by apologizing for the delay between posts. It’s been difficult to do much writing while battling having good enough service and enough battery.

We awoke shortly after the sunlight hit our tent in the morning, bellies rumbling, and food sacks completely empty. We hadn’t even left ourselves a crumb to eat that morning as we were just outside Julian and we could all but taste the famed apple pie. Thankfully, we left ourselves a short walk to the highway, where we were able to hitch into town with no problem. We were in Julian by 8 a.m. 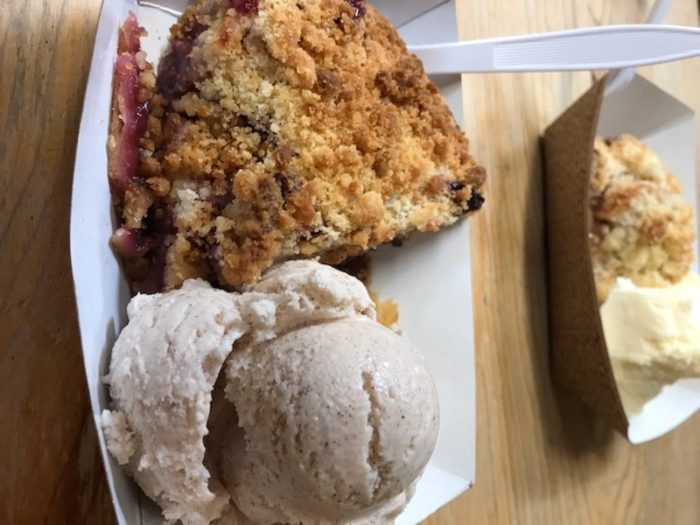 Our first stop was Mom’s Pie Shop, where PCT hikers are given a free piece of pie of their choice, complete with a scoop of ice cream. I chose the classic apple while Michelle had boysenberry-apple. Both of our pies were delicious but I must admit, this time she made the better choice. We walked around town and resupplied our food and just as we were about to hitch out our minds changed. I’m not sure if we loved our first impression of Julian so much or we both decided that it was time for a shower but we caved and decided to find a place to stay for the night to enjoy a little R&R. It wasn’t just a day of rest, however, as we attempted to do laundry in our rented room. Michelle washed her clothes in the sink while I, being significantly more dirty than her for some reason, opted to jump in the shower fully clothed. We then hung our clothes from every possible location in our room to try to dry them. With no air movement we were lucky to get everything dry before we left the next morning. But when all was said and done our clothes were definitely cleaner, though they didn’t look it. 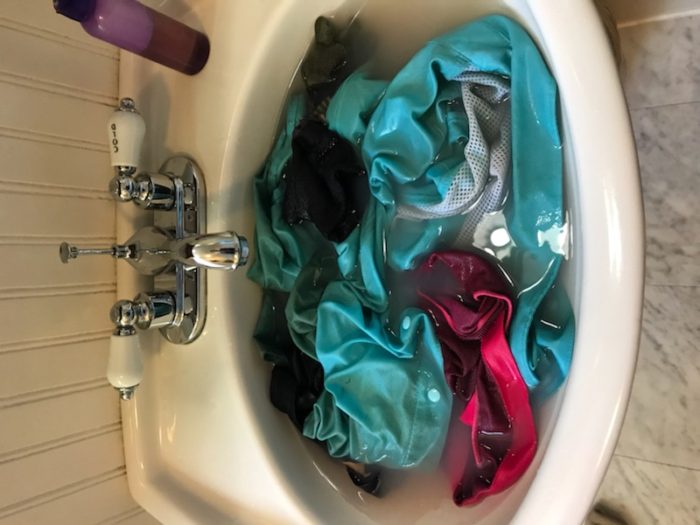 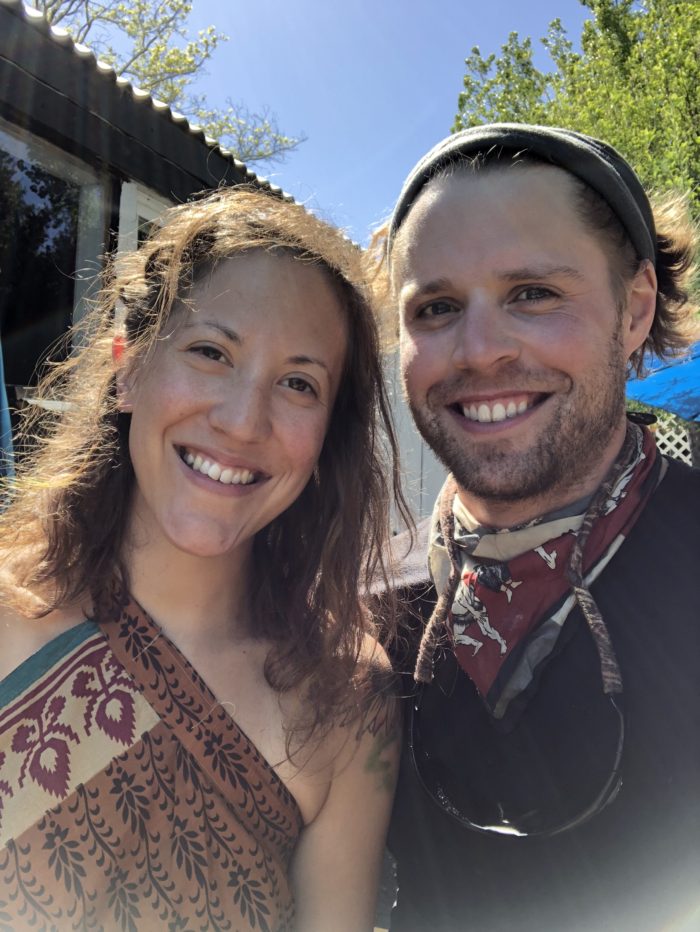 It was nice to wander around town without backpacks and clean. We stumbled upon a winery and enjoyed a few glasses of sangria, perused the small shops, and answered questions from the locals interested in our story. Later in the day, after a nap, we were sitting at our B&B playing a game of backgammon, enjoying tea time, when a handful of other thru-hikers showed up. After introductions we all agreed to go grab a bite to eat together. It was nice to spend some time off trail with some fellow hiker trash. Dinner turned out to be quite entertaining, with five of us dressed in the trail version of our Sunday best (in what I can best describe as the clothes people don’t sell and end up giving away at the end of a garage sale) walking into a nice establishment and promptly getting sat as far back in the corner of the restaurant as they could put us. We got to know one another as we shared food and drinks and stories from our journeys thus far. However, the evening didn’t last long as our bedtime seems to have shifted to when, or even before, the sun goes down. The next morning we had breakfast, enjoyed one more hot shower and hitched back to the trail. 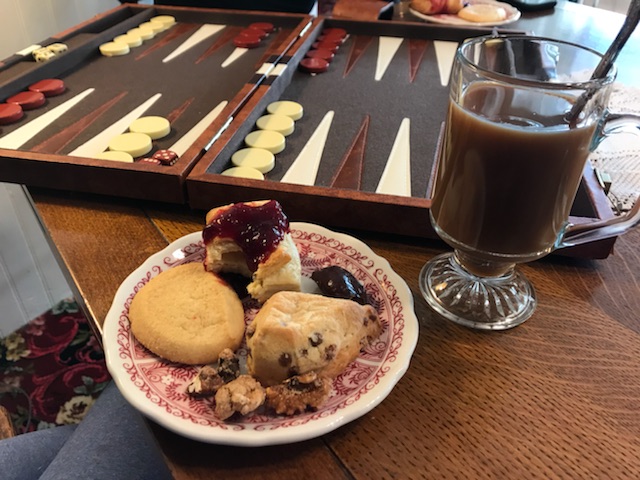 When we returned we were greeted back to the trail by the hot midday sun and a climb back up into the mountains. Michelle also had a California racer snake streak through her legs not ten feet into the trail. It didn’t take long for our freshly cleaned clothes to be soaked in sweat again as we ascended from the desert floor. As we laid in our tent that night we both acknowledged the fact that even though we were hot and sweaty again, we were glad to be back on the trail.

Both of us have been pleasantly surprised by how well we have adjusted to sleeping in the tent. This was something we both were a little nervous about initially, but we haven’t had any trouble sleeping on the trail so far. Well, if we have had any trouble it would be sleeping too much. We’ve still struggled this week to get up in the morning and get going as early as we should, but we’re getting better! 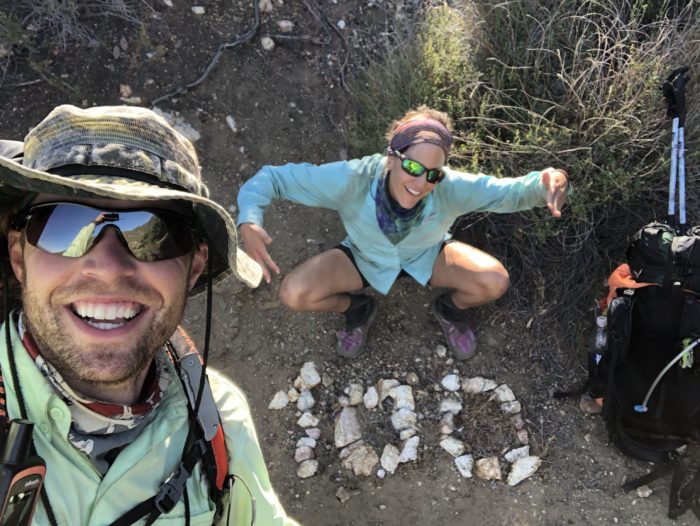 As we continued our trek north we passed the 100-mile mark; several times, actually, as people make their own out of rocks in order to get the picture they want. We then descended out of the mountains toward Warner Springs. This was the first time we had any kind of major change of scenery as all of a sudden we were in more of a meadow than mountains or desert. Not far before Warner Springs is a giant rock formation, properly dubbed Eagle Rock for its uncanny resemblance to our national bird. 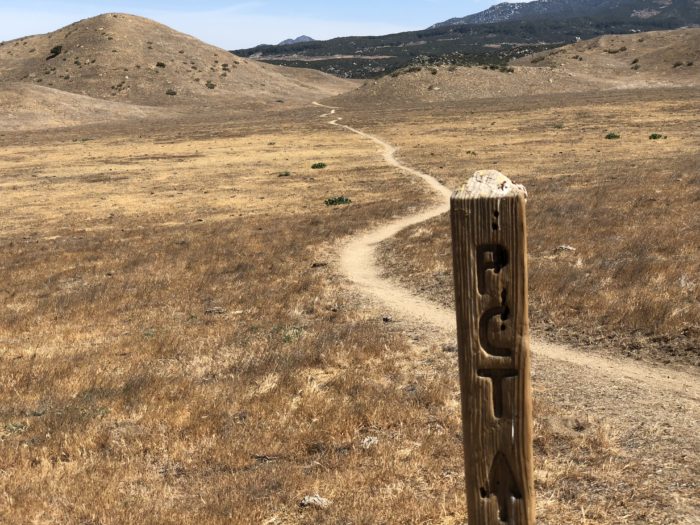 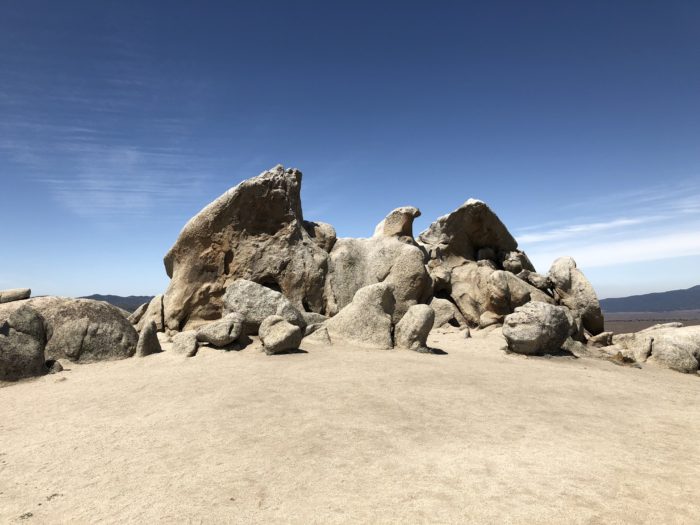 We rolled into Warner Springs late in the afternoon. They have a community resource center that is very hiker friendly. I’d guess there were more than 15 other hikers that shared the camping area under the large tree. Part of this had to be related to the fact  that they offered an area to do bucket showers and laundry, lots of plug-ins for charging, Epsom salt footbaths, and bathroom facilities; we felt like we were living the high life. We opted to take a rest day as both of us were quite sore and Michelle’s been batting a rather tender Achilles and ankle for a few days as well as having to wait a day for the post office to open so we could resupply. We used our off day to resupply and clean ourselves up a bit as well as some minor shoe tweaks to try to alleviate Michelle’s sore ankle. 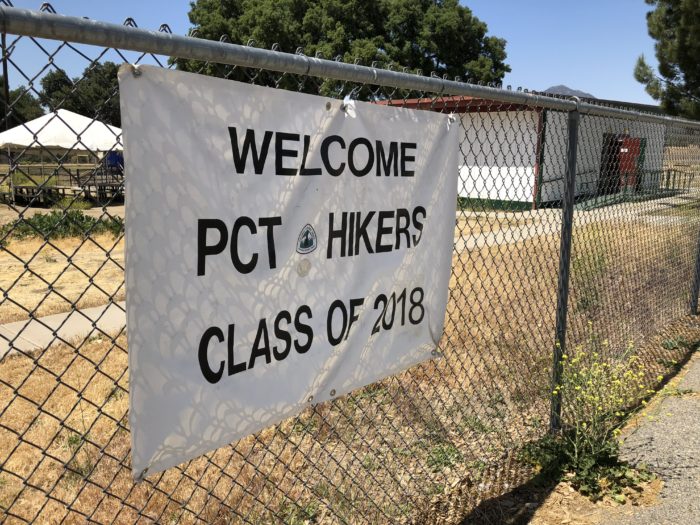 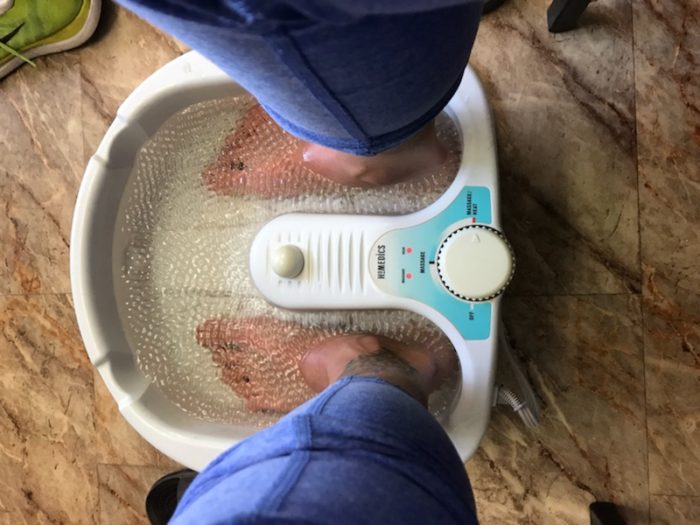 We left the next morning after stopping by the post office to forward a box of food and supplies to Idyllwild. Just like any other town we have left so far we headed back up into the mountains. After our day off we logged about 17 miles to a local trail angel’s house and camped with about half a dozen other PCT hikers at Mike’s Place. We were the last ones to arrive that evening and thank God we got there when we did! Shortly after we arrived the host pulled a large pizza out of a brick oven. Oh my goodness did this hit the spot! 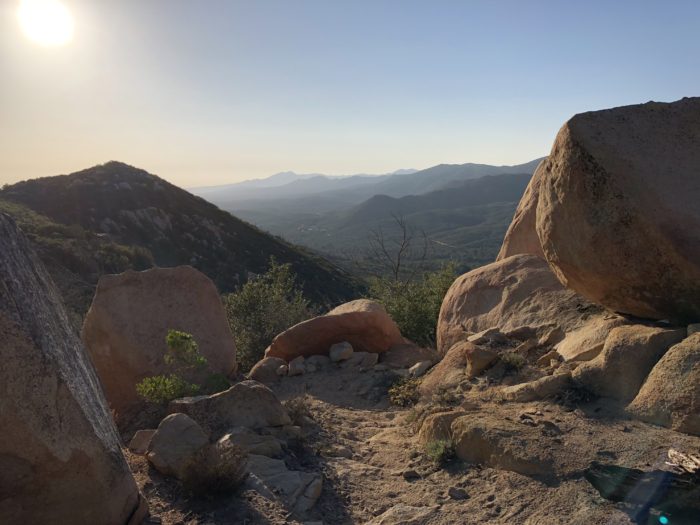 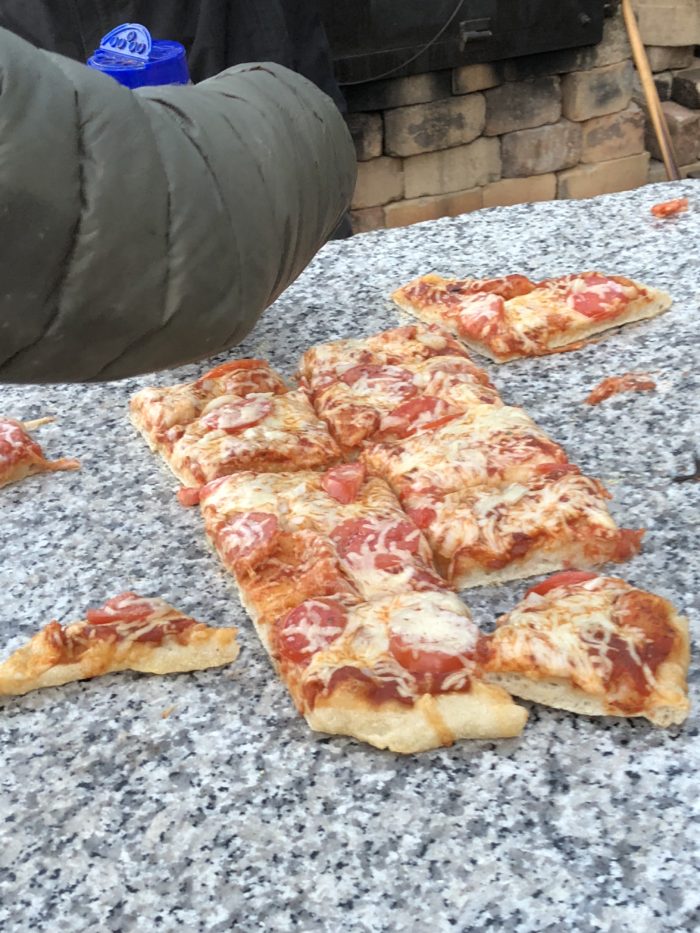 We continued to head north the next morning. It’s beginning to get hotter during the day and water is becoming more scarce. In areas that it’s really bad trail angels may set up a water cache where they will have a cabinet or even just a rope through the handle of several gallon jugs of water for hikers to refill with from time to time. They are usually in the drier sections of the trail where you might have 20-30 miles without a natural water source.

We continued onward toward our next hot meal at one of the more popular stops on the trail, Paradise Cafe. We passed some more trail magic, a unique rest area and campground equipped with water, shade, a pit toilet, outdoor shower and what makes this place unique, a small library. The rest area was full of quotes from men such as John Muir. The guestbook posed an interesting question: “Is your journey a hike or a saunter?” After a short break we pushed forward to make it to the cafe midafternoon. We both ordered a beer and I got the biggest thing they had on the menu, a one-pound double bacon cheeseburger that never stood a chance. 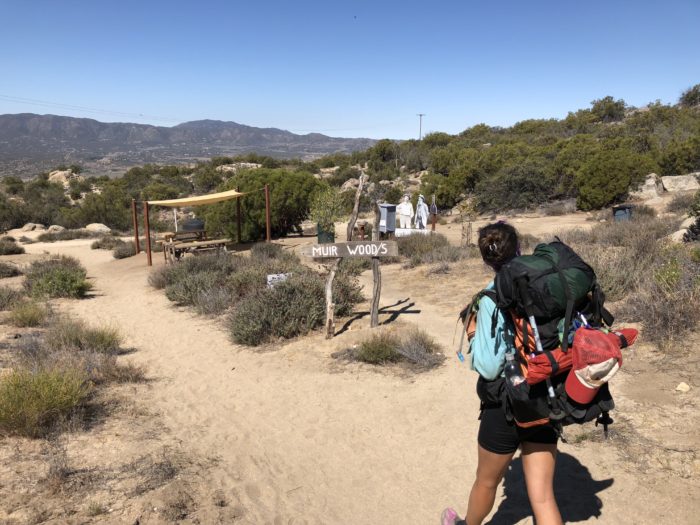 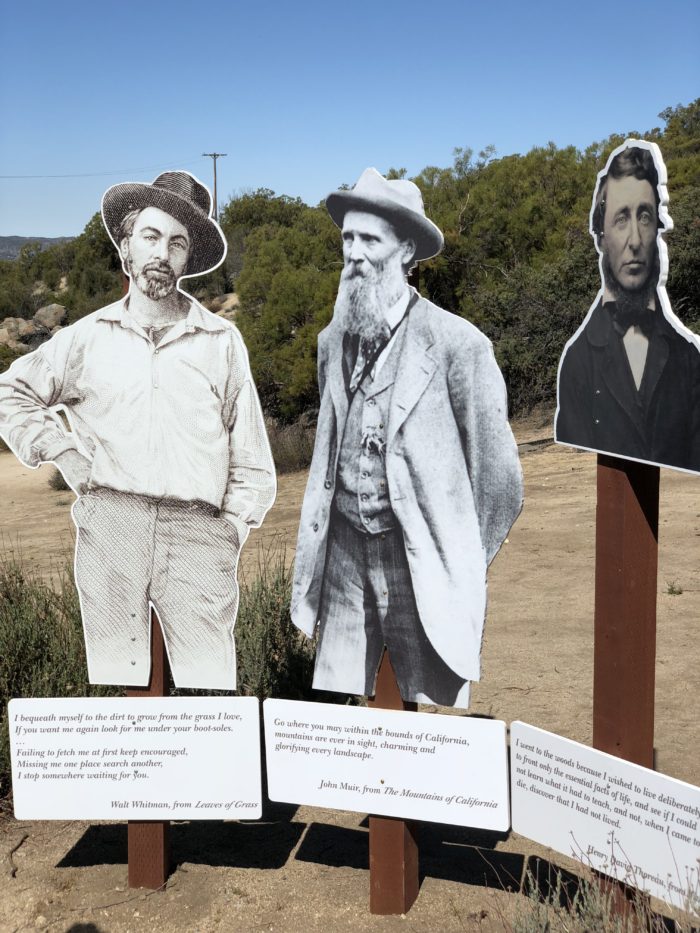 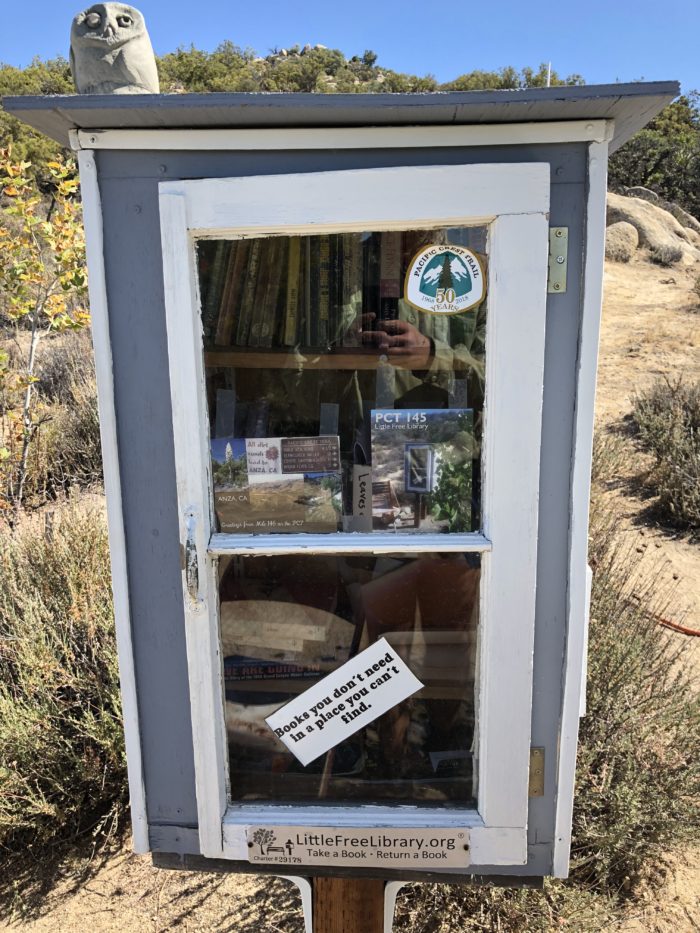 The afternoon passed quickly as we sat around and shared stories with other hikers before we all hitched into Idyllwild. We stayed the night, rested and resupplied in Idyllwild before hitching back to where we left the trail near the Paradise Cafe. It was cool and windy when we returned to the trail. We had planned a relatively easy day as we were going to take the next 24-mile section to a ten-mile fire closure of the trail in two days. We slowly climbed, taking it easy up the into the mountains that we could barely see on the drive out due to the dense fog. It was easily our chilliest day so far and any break we took would result in us being cold. Once we reached the top of the ridge between the two mountains we began to look for a place to camp. We found this neat little spot tucked in out of the wind under some trees just off the side of the trail. We had a beautiful view of the valley and Palm Springs down below. Not long after we set up camp the clouds began rolling over the ridge, creating about a 100-yard bubble around where we had set up camp. It was completely bizarre. Unfortunately, we don’t have any good pictures of it to share.

As we rested up that evening we feasted on the allotment of food we had with us for the day. The sunrise from our tent the next morning was beautiful. 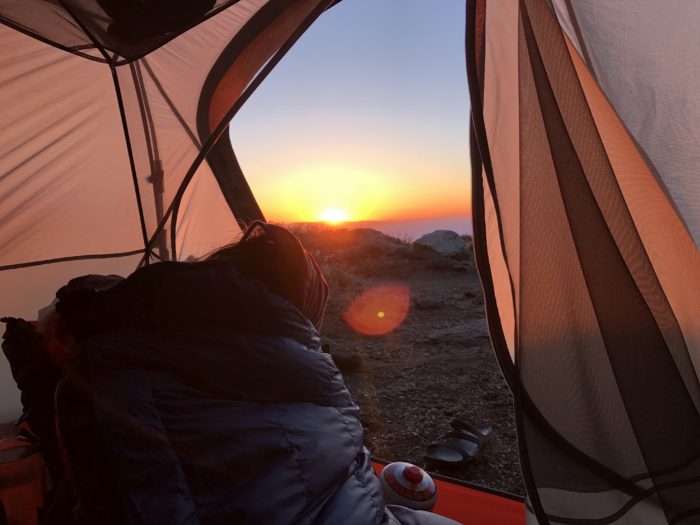 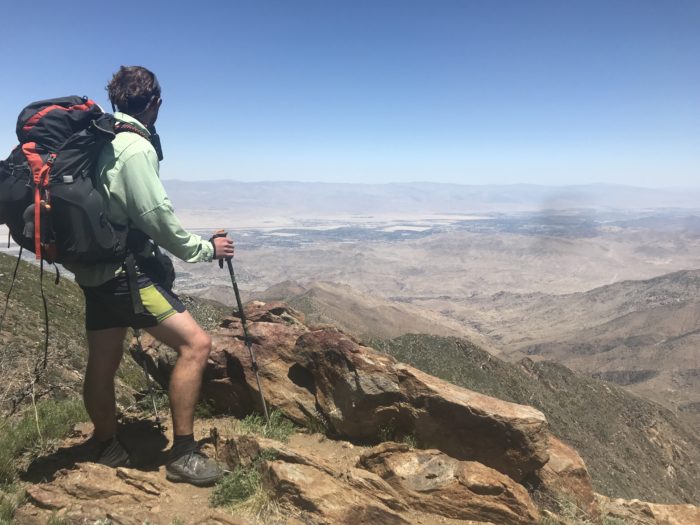 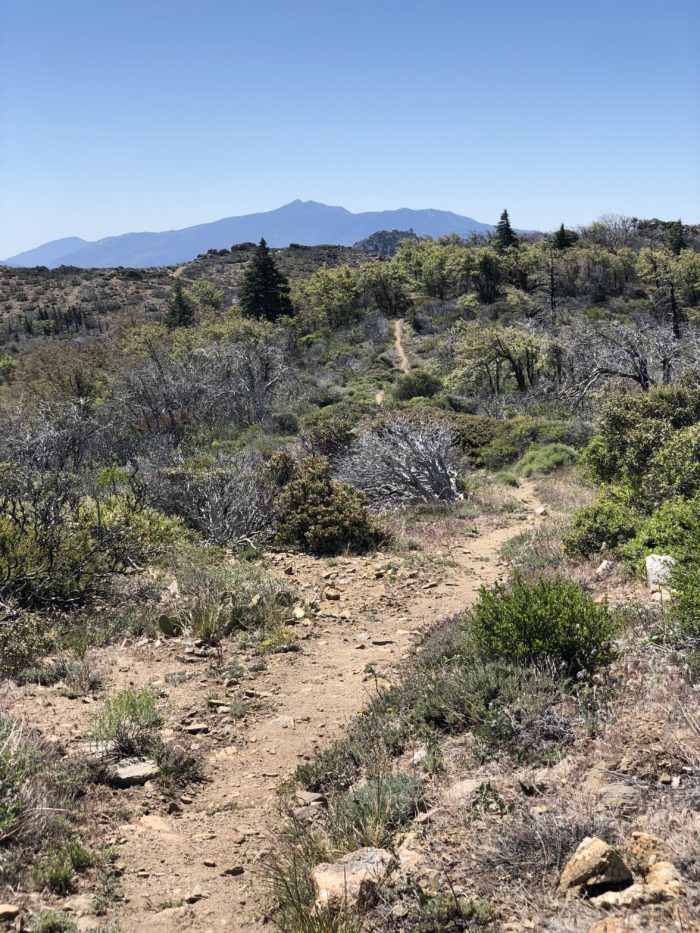 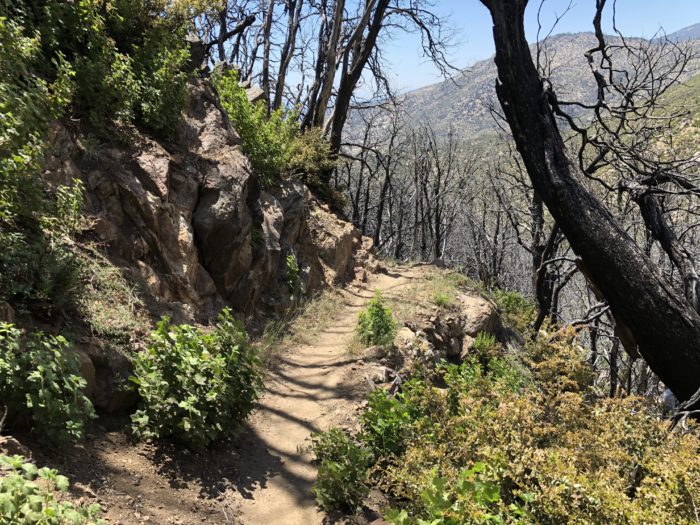 We packed up camp and continued hiking the remaining trail up to the fire closure, reaching it about noon. After walking the ridgeline for a few miles we had a steep few miles to hike down the trail before reaching a road we had to walk as part of the detour around the closure. About halfway down the trail there was a downed tree across a steep section of the trail, surrounded by a large patch of loose dirt where people had been walking around. As we were descending down, Michelle lost her footing and landed flat on her tailbone. We took our time getting her up from the ground, making sure she didn’t have any surprise injuries. Thankfully, she was able to get up and continue moving; just a bit gingerly. We slowed our pace a bit and continued down toward the road. This was our first paved road walk of the trail, and what a miserable experience. After weeks of walking the trail treading down pavement feels like a hammer is meeting your feet at the ground with every step. We finally reached the highway and hitched back to Idyllwild, planning to take a half day and make sure Michelle was good to go. Next stop: San Jacinto on the way to Big Bear.

Hello! My name is Nolan, I'm a traveling ICU RN from the midwest who's taking the summer off to hike the PCT! Exactly three months prior to my start date I met my girlfriend and now thru-hiking partner Michelle. Our goal is to share both the male and female perspectives as well as a look into what it's like to thru-hike as a couple. Follow along as we put our young relationship to the test while we walk from Mexico to Canada, while sharing all the ups and downs along the way!