Digging Our Graves in the Desert 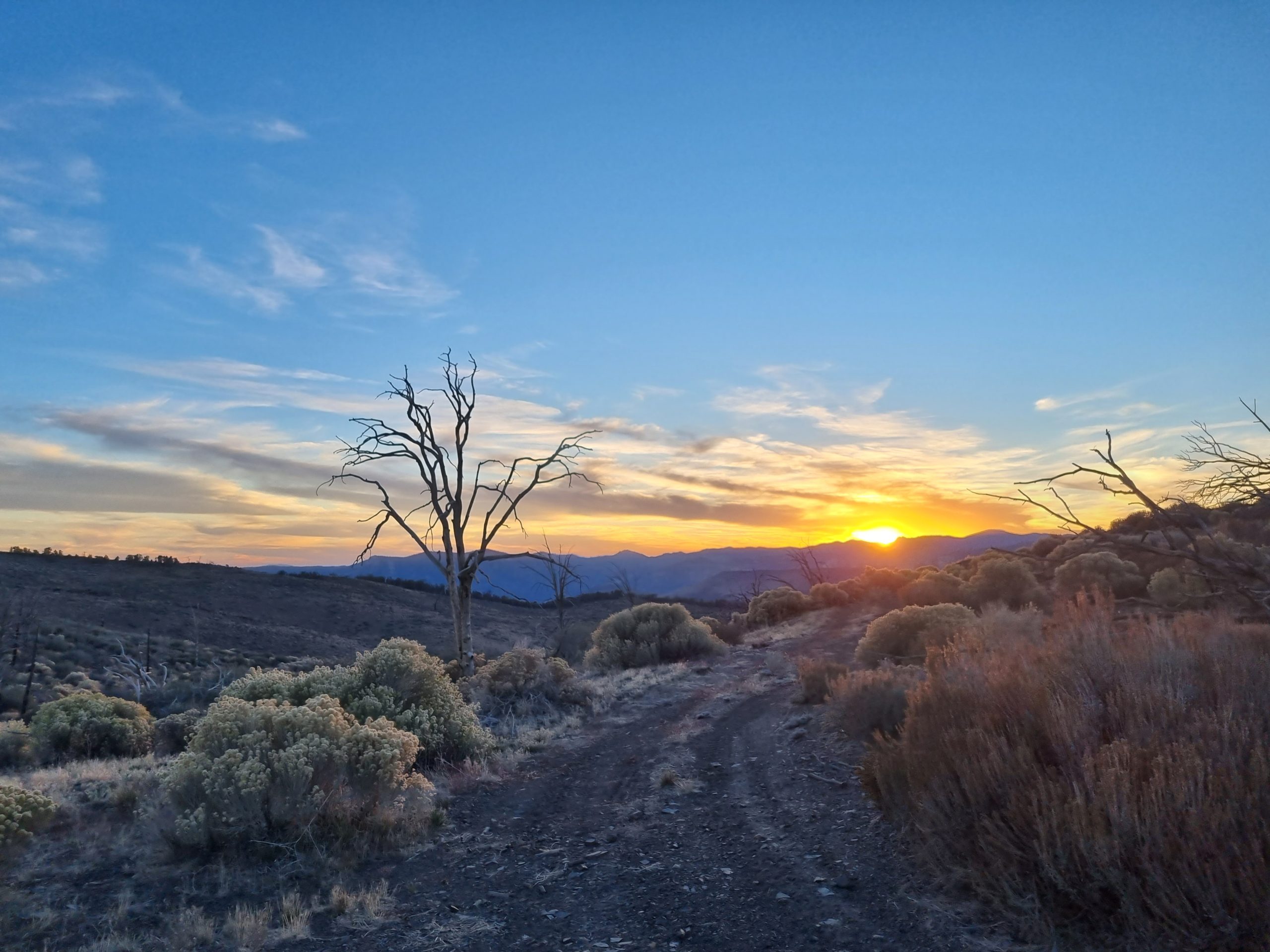 We waited for the coffee in the general store to be done until 09 and started walking only at 10.30. It was hot and exposed and it felt like another world after the High Sierra. We had to do a crazy climb and were hiking in the dark.

We couldn’t find a tentsite that was marked in FarOut so we pitched the tents on very bad slopy sand and were gliding down in our tents the whole night. 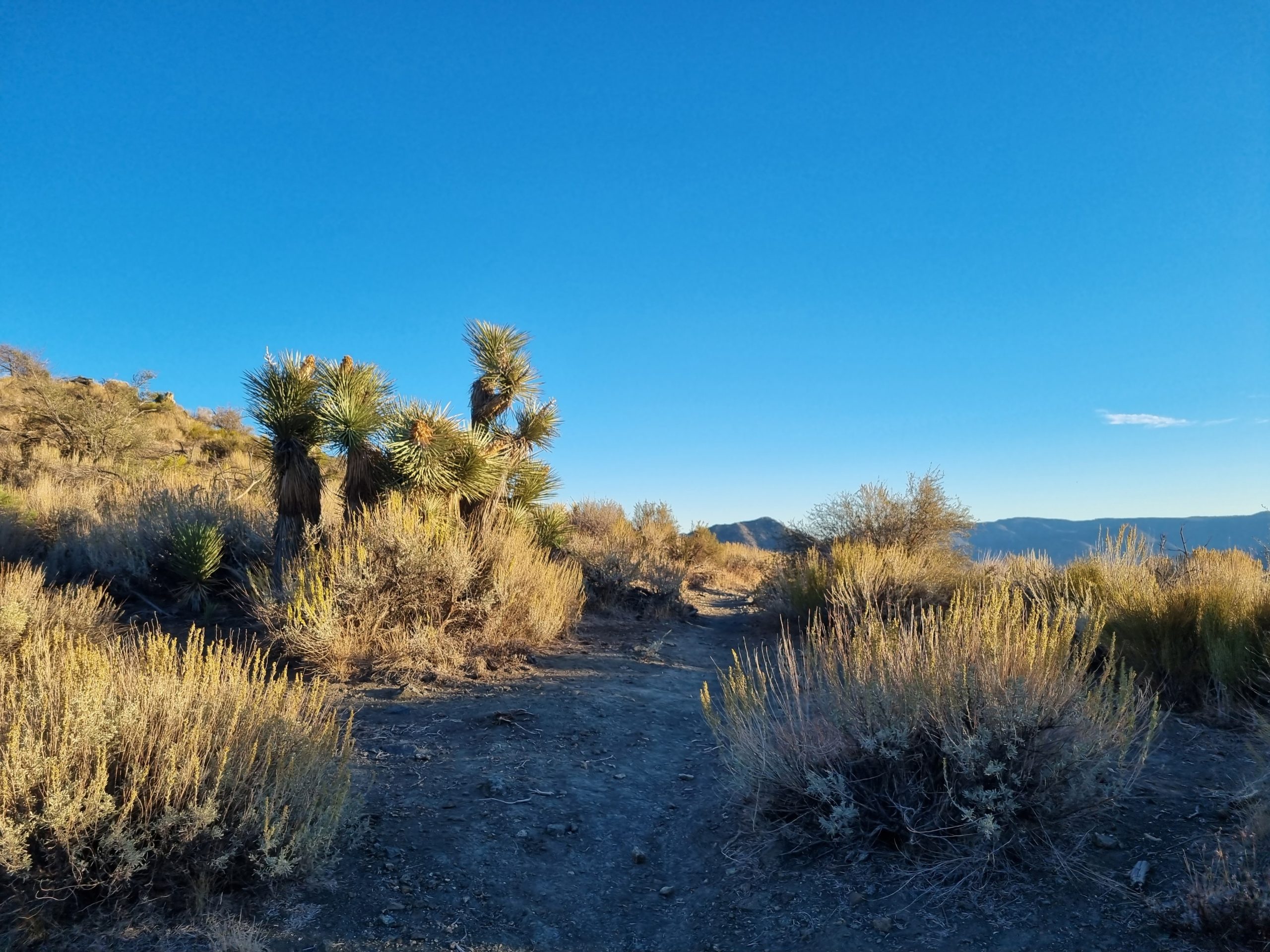 We got up at 05.30 and stopped soon by a creek to have breakfast. We were filtering water for a small eternity as the next source would be in around 13 miles. The trail was pretty, and I felt South California is nice hiking.

That changed soon as we had long climbs that were really exhausting, carrying liters of water. It got hot, too, and from somewhere the black flies showed up getting into your ears, eyes, nose, and mouth in the middle of the crazy climb. I had to dig out my mosquito net, which made it even hotter and more difficult to see the rocks on the path.

I was listening to a podcast about healthy eating while digesting my processed food and snacking on sugar. The trail food is really afwully unhealthy, and in this section, you don’t even get enough water. We couldn’t buy anything fresh in Kennedy Meadows, and for this section, I didn’t even have dried fruit with me, and the pictures of fresh salads didn’t leave my imagination.

We came finally to a tiny stream where it was basically impossible to wash your feet. Probably we won’t get any water for hygiene at this section which was extra great as we both would also probably get our periods.

We had to filter water for 17 miles overnight, and the next water source would be an unreliable water cache. Nine Beers headed on first wanting to find a campsite before the sun was down while I kept on dragging my heavy load slowly. I saw a tarantula on the ground and abandoned the idea to cowboy camp that night. 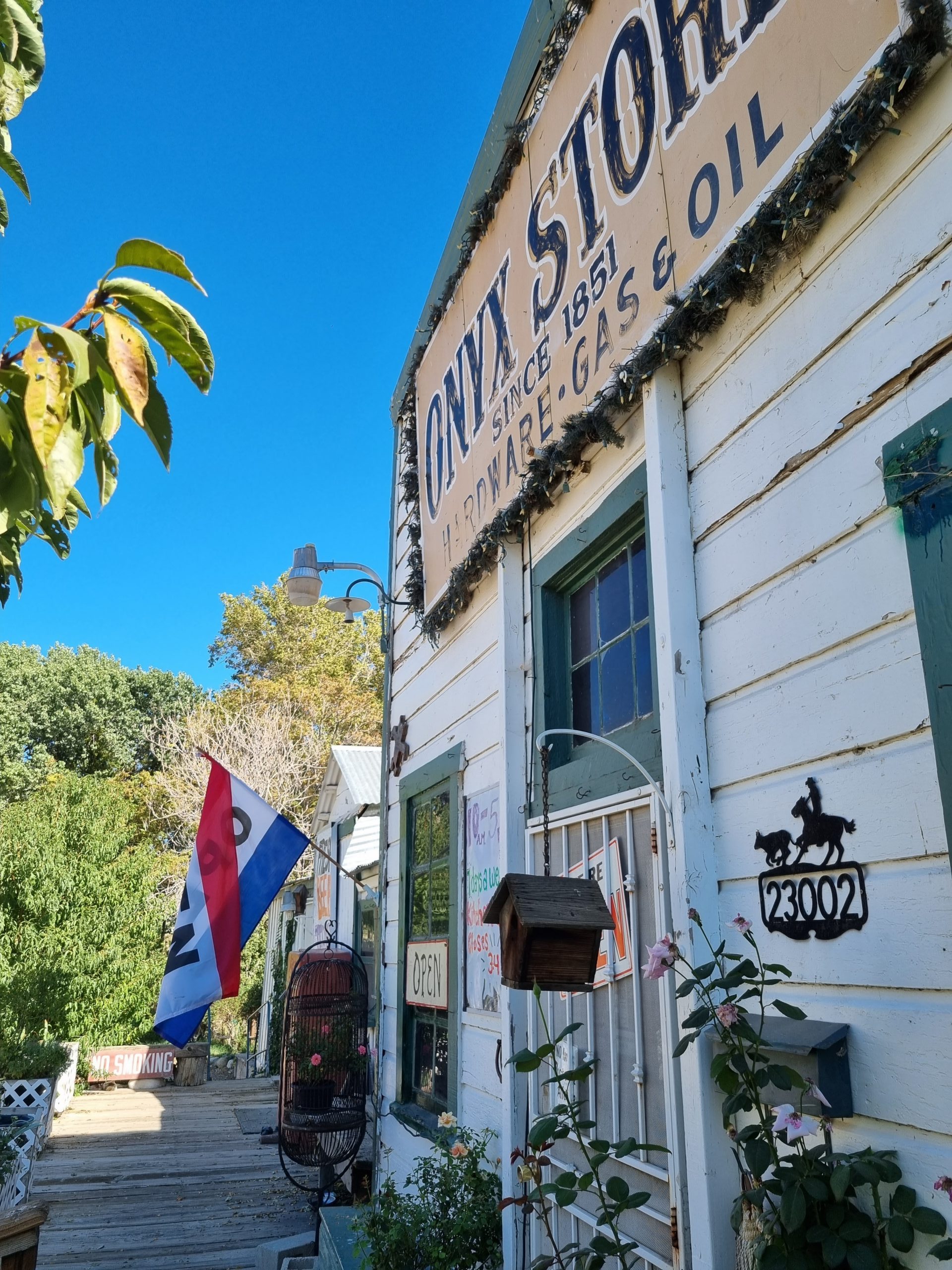 We got up at the usual time and started the hike towards the water source with our heavy water carries. The landscape was amazing, and you could see the sandy desert mountains down in the valley. Nine Beers got service and saw that there was no water at the caches in Walker Pass. So we’d have to hitchhike to a town.

We came to the pass, and after half an hour got a hitch to Onyx. There was only one shop that was basically a candy store selling Japanese candy and Russian chocolate. We were hoping to find some more food but could only get a sandwich to share and to buy more and more candy.

There was a sink in the garden where we managed to fill up our water tanks to leave at the trailhead. We were thinking that we should wash our feet in it since it would be days without a proper water source. I wanted to have a whole body bath there, but there were spiders in the sink, so I didn’t realize the idea. I wonder what the owners would have said if I did that.

We had to drag water for the next 20 miles with us, and that made the climb from Walker Pass hard. We stopped after a few miles as it would be windy, and there was no protected site ahead. As we were eating dinner, Nine Beers was researching FarOut and happily said: “The day after tomorrow we can wash our feet!” She was also going to brush her teeth that evening. Who says hikers aren’t taking care of their hygiene?

I decided to cowboy camp but saw some ants next to my camp after setting up the sleeping gear. I moved to another place, and there were still some ants, but I was too tired to care. 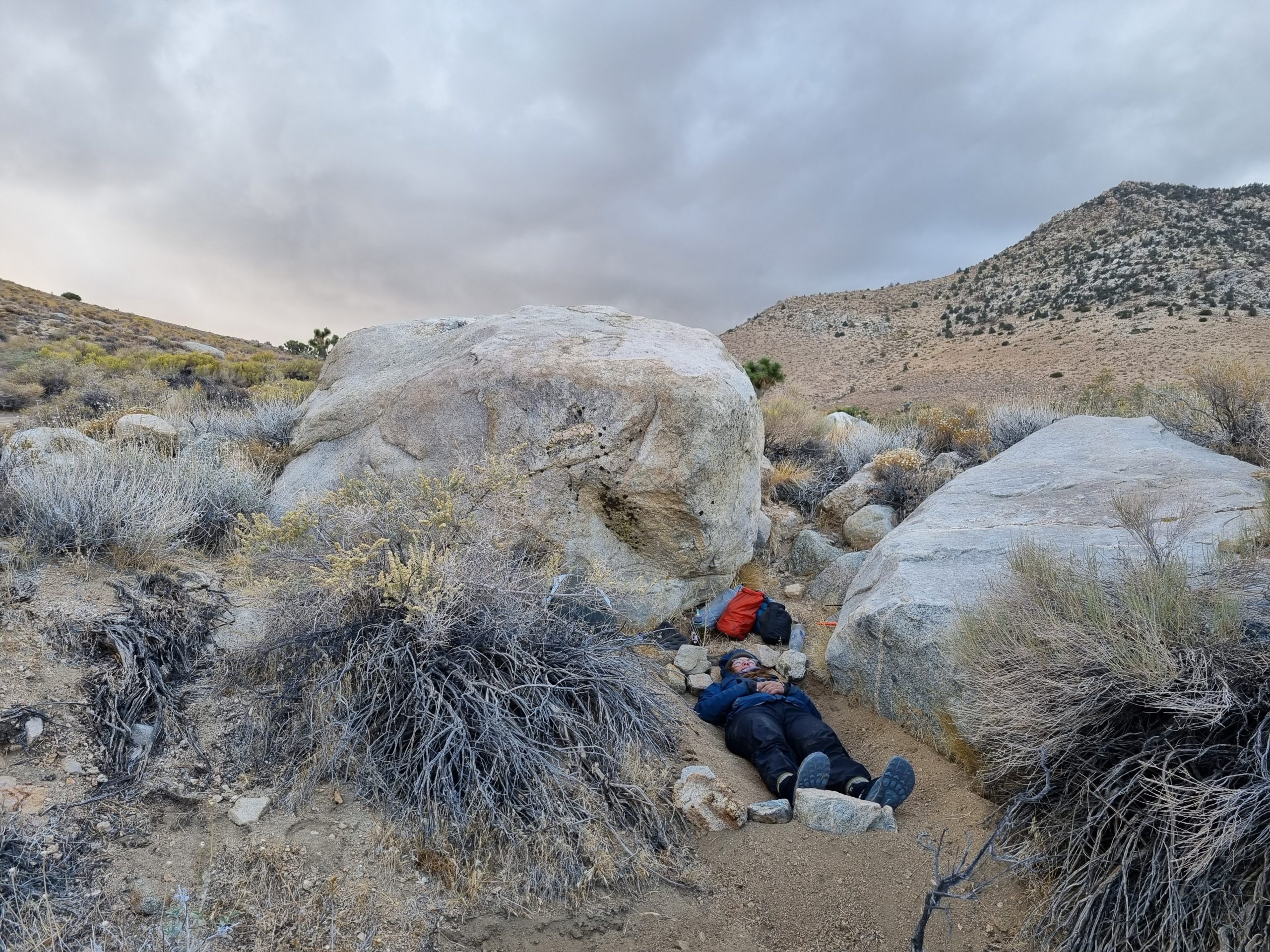 I woke up every 20 minutes at night as the crazy loud wind took on and blew inside my sleeping bag. Nine Beers had barely better sleep in her tent.

We got up after five and were walking by 05.35. We came to the top of a hill and saw finally Los Angeles lights at a distance. The wind was crazy, and it was very cold to stop. It was very annoying not to be able to hear anything but the wind.

We walked quite fast and planned to do a 24-mile day. The wind got just stronger, and after lunch, we came to a switchback that was so windy I had to hit the trekking poles into the ground and squat not to fall off the trail. Finally, the wind was so strong we were just screaming and I had to hold on to a big rock since the wind was pushing me against the mountain. My sunglasses and hat almost blew off, and I was walking with my back bent to avoid the sand flying into my eyes.

We reached finally the water cache that some trail angels had fortunately filled and saw that there was a wind warning of up to 75 mph wind. There was no way we’d continue hiking up the hill. We had to find a less windy spot to emergency camp down between rocks and Joshua trees. We couldn’t even set up the tents as it was so insanely windy. We were afraid it would also start raining since we didn’t have a protection from it. And again we were behind the planned schedule and would need to ration our food.

We started digging places to cowboy camp, and I said they looked like graves. After the dark clouds moved away, we dared to set up the cowboy camps and went to sleep hoping we wouldn’t die of hypothermia. 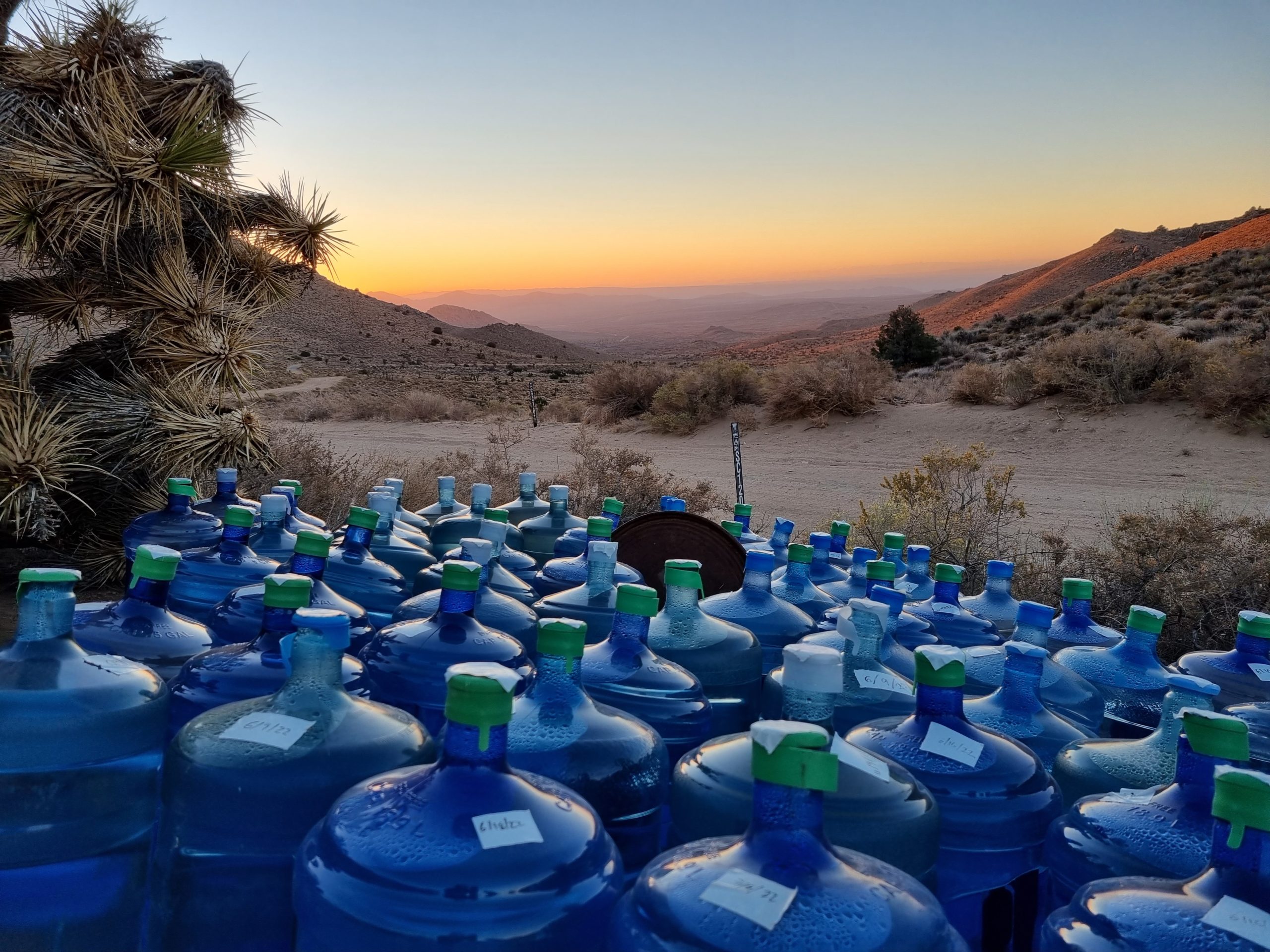 It was very windy at night, and the gusts were just blowing up my quilt like a balloon. We were going to get up at 05, but as it was still crazy windy, we decided to postpone the wake-up to 06.30. Fortunately, by that time, the wind had calmed down.

We filled up our water at the caches and had breakfast in the middle of the trail. We were again counting our food as the windstorm episode had prolonged our journey by half a day.

It was quite fast to hike, and the landscape moved from exposed sandy mountains to pine forests during the day. We were trying to be effective and managed to keep the breaks short. There are no natural water sources at this stretch, so we had to rely on caches.

Exhausted, we made it to camp in the dark already at 19.30, although we already had had dinner on the road. 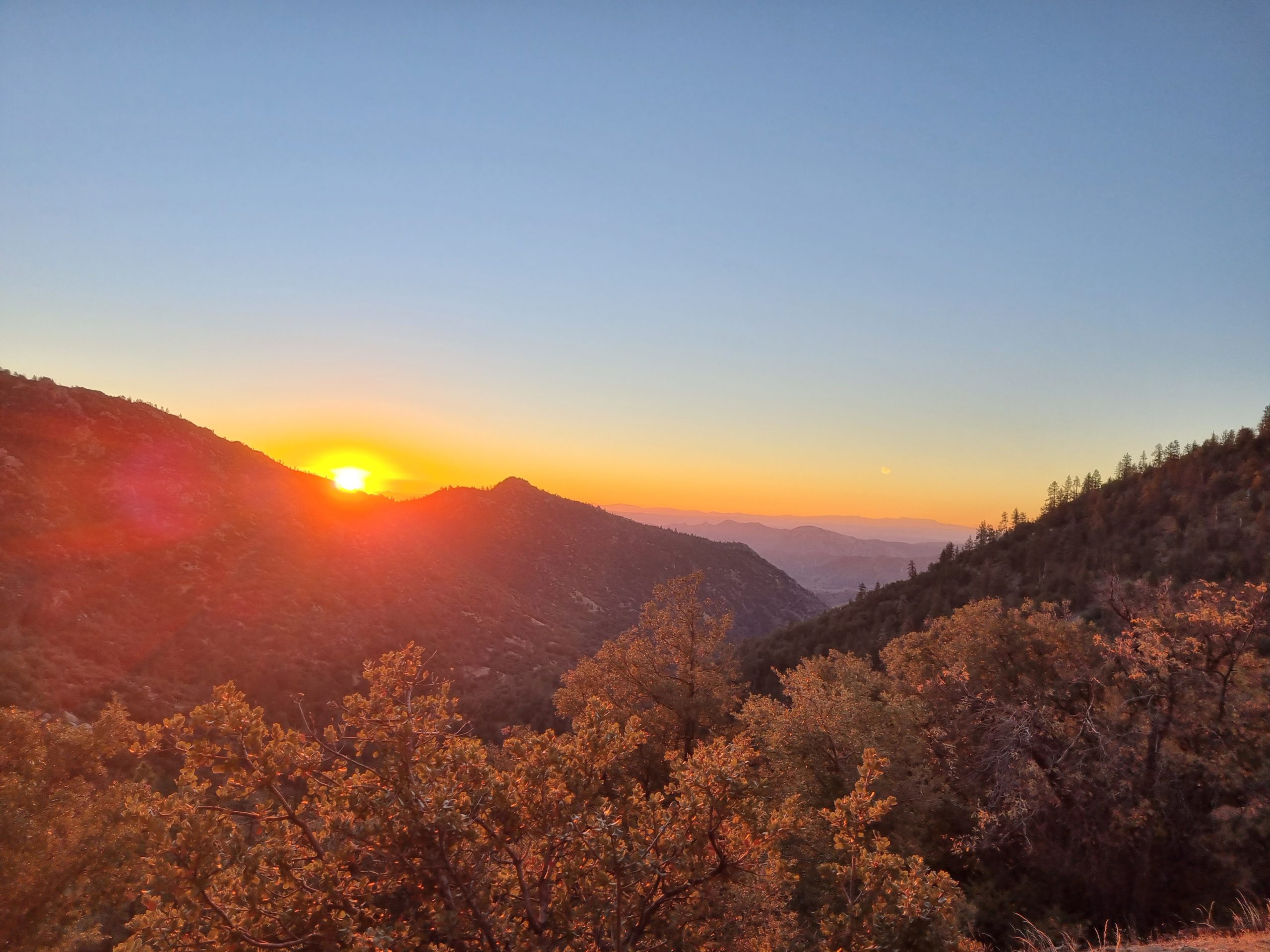 When we woke up, our tents had frozen solid and had ice on the inside. Nine Beers had lost her gloves and had to wear socks on her hands.

There were again no good water sources, and it took about an hour to filter water from a small drizzle.

After lunch, I saw a bear cub climbing down from a tree just at a spot where somebody said they had seen five bears in five minutes.

We were not having again enough food and were in starvation. We were dreaming of food and talking about the food we’d eat in town or at home about fifty percent of the time.

There was some gradual climbing, and we passed huge noisy windmills. Since we wanted to have half a day off in Tehachapi, we wanted to kill some miles that day. That meant 15 hours of hiking that day, and we were pretty dead when finally setting up our tents on a windy hill. 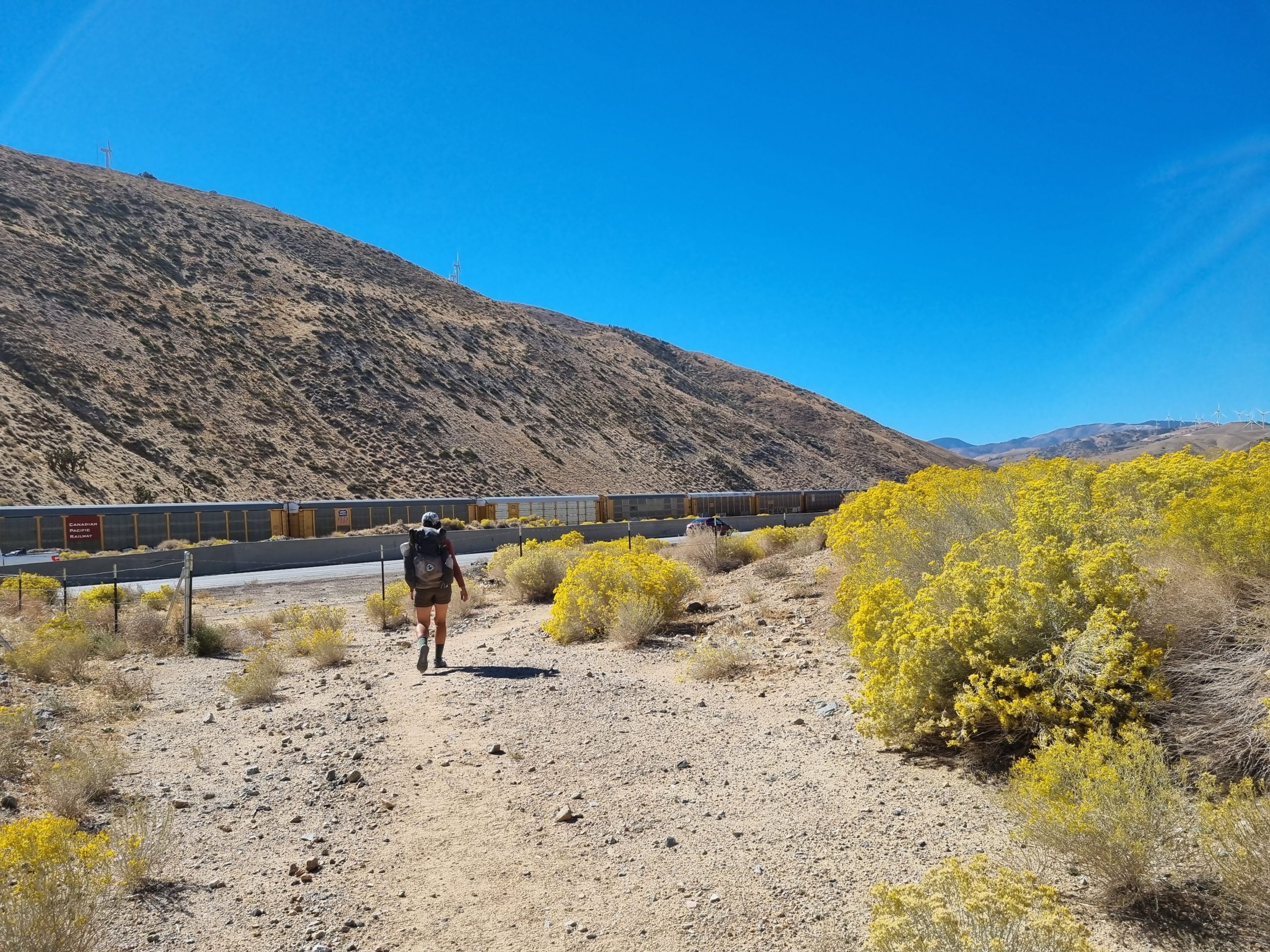 We got up at five and started walking in the windy morning. Exhausted and out of energy, we climbed up some dirt roads on the path where Cheryl Strayed had started her PCT hike.

We were having our last food on top of the hill watching down the highway, and my lunch was a bag of tuna and a bag of Skittles. Needless to say, that did not end my hunger.

We had a drive from a lovely trail angel, and he had even a trail magic bag for us containing beer, apples, candy, and water. It was amazing. He gave us a tour of Tehachapi and then drove us to a Mexican restaurant where we had giant burritos and then got some pastry in a German bakery.

After that, it was all the other relaxing town day chores: walking extra miles to a grocery store, buying food, checking out the gear store, walking back and sorting out the laundry, noticing your breakfast pastry has been thrown away, walking to a laundromat, exchanging quarters with a hassle, washing your laundry while repacking the food in record time, and then going to a restaurant to eat more. We had no time to take a shower, and apparently there was only cold water according to another SoBo hiker who had arrived at the hostel (that actually was somebody’s backyard).