Sarah Mabee didn’t know she’d be hiking part of the Pacific Crest Trail this year. Nine months ago she didn’t have ambitions to hike any long trail, because at the time she was in a hospital waiting to die.

From one of Sarah’s Facebook posts, reproduced here with permission: “I was on my death bed because of extremely severe anorexia and bulimia. I was in the hospital, being force-fed, I had a strap on heart monitor (my resting heart rate was 32 bpm), and I was barely strong enough to walk… Recovery seemed impossible but so did living.”

Sarah has battled eating disorders for years, but when a sexual assault sent her spiraling into suicidal ideation just before Thanksgiving last year, it seemed it might finally be time to give up the long struggle. “So I drove my car into a bridge on a Monday night and totaled it… and I was really injured.”

Her parents had watched Sarah struggle with her eating disorders for six years, including a hospitalization earlier that year, but nothing could have prepared them for her suicide attempt. “I wouldn’t speak to my parents… They didn’t even know what was going on because I was so numb.”

Taking his daughter to the hospital that night was one of the hardest things Dave Mabee had ever done. As he sat at her bedside, his thoughts turned, inexplicably, to the Pacific Crest Trail. He and several friends had hiked sections of the trail in Oregon over the years, and in 2018, a good friend’s daughter had thru-hiked the whole thing southbound.

Now, in a moment of sheer desperation, he heard himself speaking to his daughter. “Sarah, if you recover, I will quit my job and go on an epic hike with you on the PCT.” It was a last-ditch effort to get her to care about living again.

Sarah hated the idea at first. She was furious with her dad for wanting her to live when she wanted so badly to die. “I actually was so mad at my parents that I didn’t talk to them for over two weeks.”

But then, her mother gave her a copy of Wild  by Cheryl Strayed. “She talks so much about her emotional growth… and she’s so authentic and vulnerable with the reader.” She read the book three times cover-to-cover. After the third time, she called her dad and told him she was on board.

The idea of hiking the PCT had finally given her a reason to keep living.

Planning for the Trail 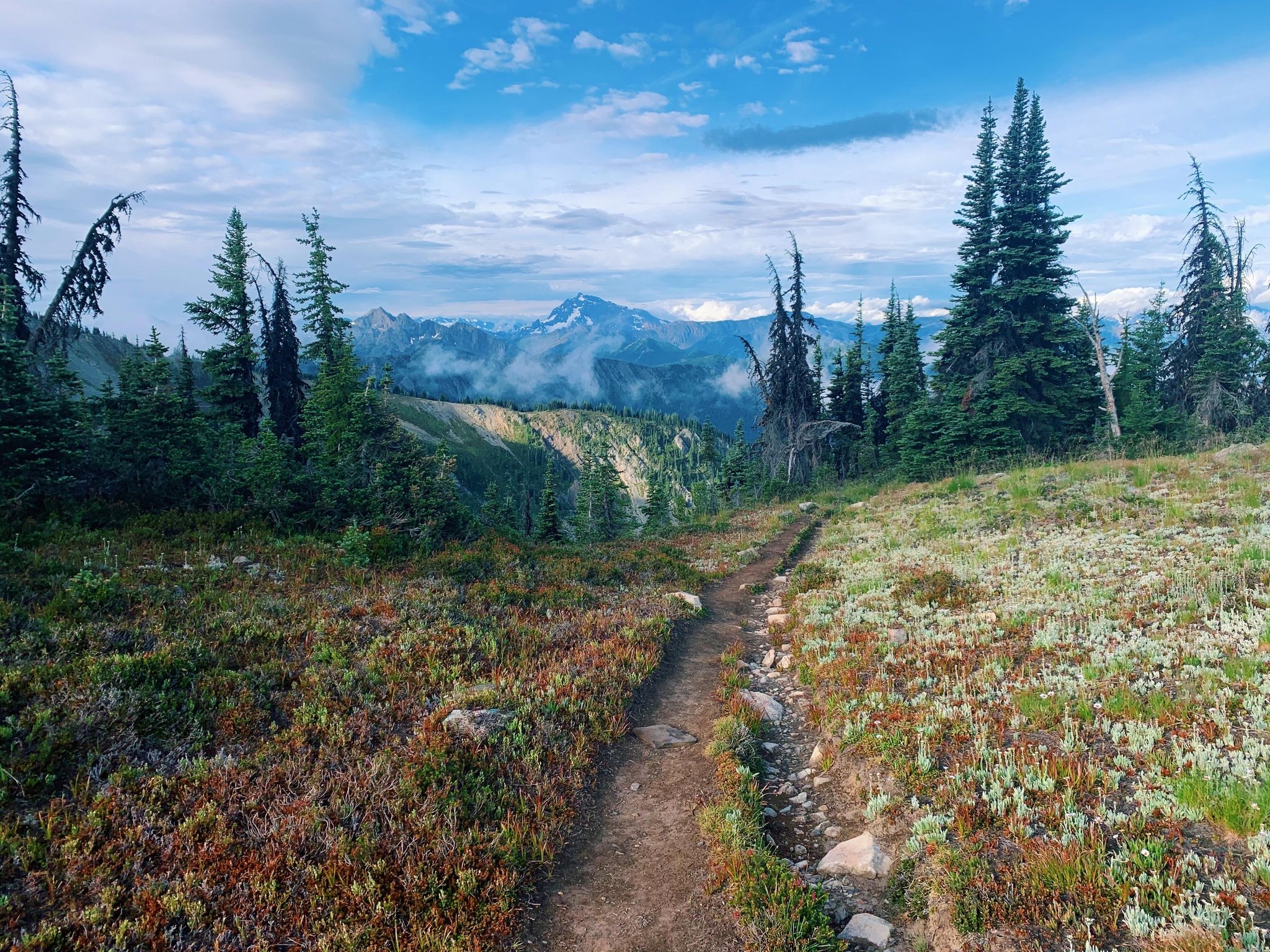 Sarah wasn’t allowed internet access at the treatment facility where she was staying, so her dad handled most of the research and planning for the hike. Sarah called him as often as she could to help over the phone.

She wouldn’t be released from the treatment center until late February, giving her just three weeks to buy gear and prepare for the trail before their planned March 21 start date.

Physical training wasn’t an option. “At the clinic,” she explains, “they’re really against exercise. They don’t let you walk around. There’s limits on how long you can stand.” This is because excessive or compulsive exercise is a key symptom of most eating disorders. Instead, Sarah focused her efforts on mental preparation for the trail.

“What I’ve realized after struggling with my eating disorder for so long is that it’s all emotional. The whole restricting of food and throwing up food, it’s all been to help numb and deal with emotions that I didn’t want to deal with.”

She Was Up Against a Lot

She had never hiked or camped in her life, she was recovering from a three-month hospitalization, and she had her eating disorder to contend with. Between the caloric demand and the cardiovascular fitness required for the thru-hike, her dietitian viewed the whole endeavor as fertile grounds for a relapse.

And from a thru-hiker’s perspective, any one of those challenges would make a ready excuse to quit when the going got tough. Only with unwavering determination could such a hike succeed.

“It was crazy, the whole idea of the hike. You have to eat a ton of food, and I struggle with eating. My dietitian (at the clinic) was not supportive of me doing the hike at all.”

But despite the opposition, Sarah was determined to go forward with her plans. She knew what was at stake, but she felt strongly that the hike would be an opportunity for emotional growth.

“I’ve known people personally who have died from this disease. You can send someone to a hospital and force them to eat, but if you don’t give them a reason to live and a reason to stay recovered, then they’ll just relapse. And it happens to so many people.” 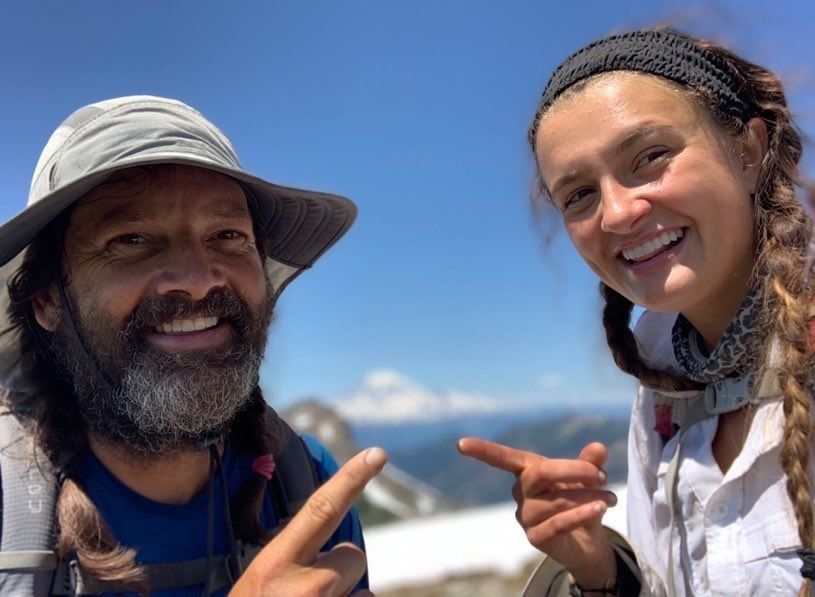 For Dave, the hike would be a chance to reclaim his own health, too. He had struggled with his weight in recent years. The prospect of the hike “helped him realize how important his health and fitness is.”

And Then COVID Happened

“We had so many chances to just not do the PCT.” They had planned to fly out to California, but Gov. Gavin Newsom issued a statewide stay-at-home order just hours before their flight was due to depart. “We canceled it right before going to the airport, like, ‘OK, I guess we’ll have to go later.’ ”

It would have been easy to push the PCT off completely at that point, but Sarah and Dave weren’t ready to give up on their dream just yet. Like so many would-be thru-hikers left in the lurch this year by the pandemic, they clung to hope that section hiking would still be possible later in the year. By the end of May, it seemed their chance had come.

They set out from South Lake Tahoe on May 29 in deep snow. “It was terrible,” Sarah laughs. “That was my first time ever backpacking, and I thought we were gonna die. We did like 25 miles in snow, just with Guthook trying to navigate… We didn’t have crampons or an ice axe.”

But they got through the snow in due time. Sarah eventually took the trail name Frost Nip, while her dad became known as Rubber Band. It didn’t take long for the pair to fall in love with the trail.

From Facebook: “The PCT has been worth every second of mental and physical pain that led me to where I am now. I want to thank all of the wonderful people I met on my hike. You all made the hard days bearable and you guys reminded me why life is worth living.” 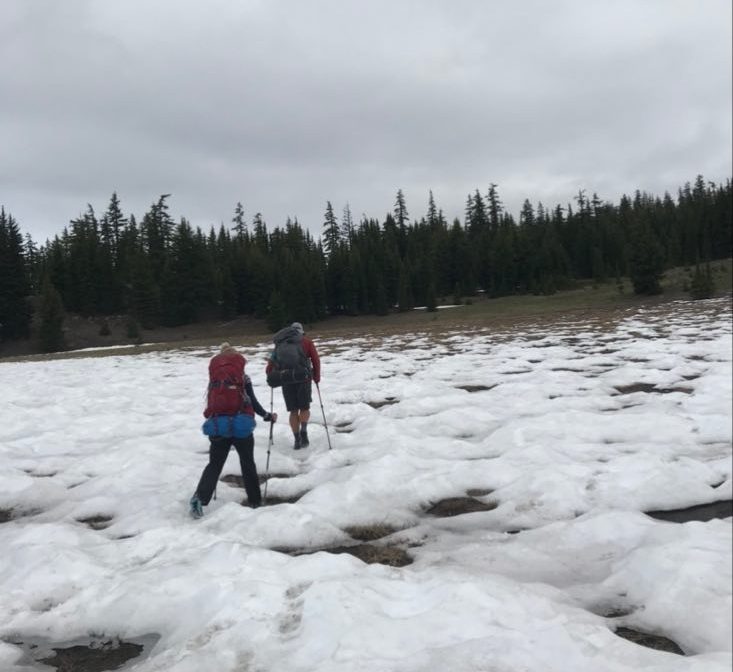 “The best part of being on the trail is that… sometimes you just get hit with this weird surge of happiness and peace. You realize how still the world is, how beautiful it is.” That stillness helped Sarah to cope with her eating disorders on the trail. “It really taught me how important it is to just ride the urge… If I felt triggered, I would just lie down and listen to music and be in the nature (sic).” Talking with her dad was also an important strategy for coping.

Her advice to anyone struggling with an eating disorder?

“Just keep fighting, because it gets better. And the impossible can be possible.”

Words we could all stand to remember.

“(The trail) really taught me how to listen to my body more. I realized I couldn’t restrict or throw up on the trail, because otherwise, I would just have no energy.” Hiker hunger proved to be a powerful teacher. “You have to eat. Otherwise, you’re not gonna make it.”

Once she adjusted to life on the trail, she didn’t struggle with her eating all that much. “But when I came into towns, I would… It was overwhelming to see people. And I would see my body in the mirrors.” Like many who suffer from eating disorders, Sarah also struggles with body dysmorphia, a condition that causes fixation on flaws in one’s physical appearance that may appear minor or nonexistent to others.

The hike was a transformative experience for Sarah and her dad. “I feel like my soul has always been there, but… I’ve taken away a lot of the layers that were over me before.” The simplicity of trail life was deeply appealing. 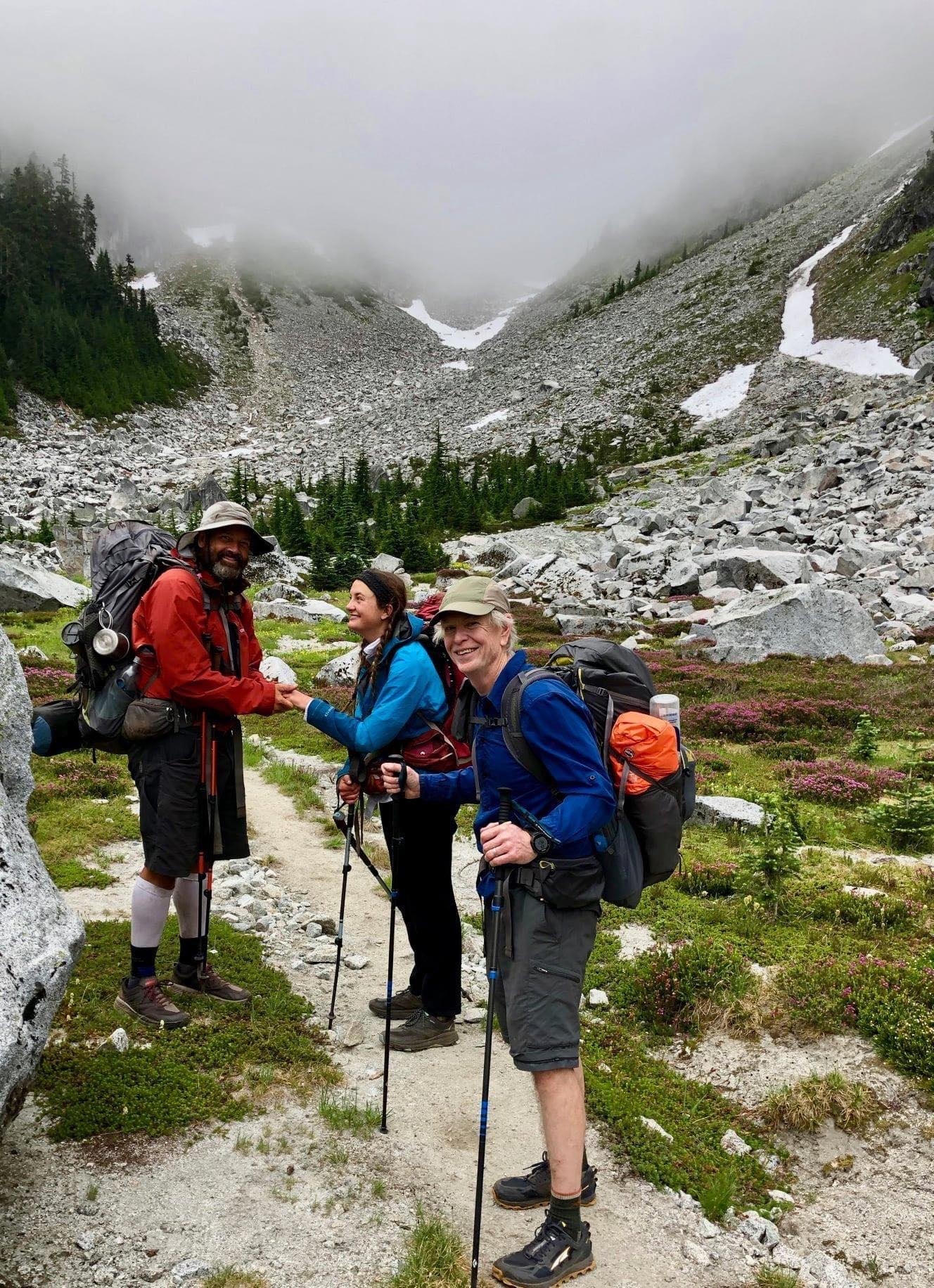 And then, of course, there was the trail itself. “We saw an actual mountain goat on the Goat Rocks, and that was freaking awesome… We’d taken the alternate route and went over the top of Old Snowy. That was one of the most amazing spots and moments.”

“My advice for hiking would be to take the time to enjoy what you’re doing. Don’t just think about the miles.”

Frost Nip and Rubber Band reached the Northern Terminus on August 23. “It was crazy. We both cried and sat there a little bit… It didn’t even feel real.” 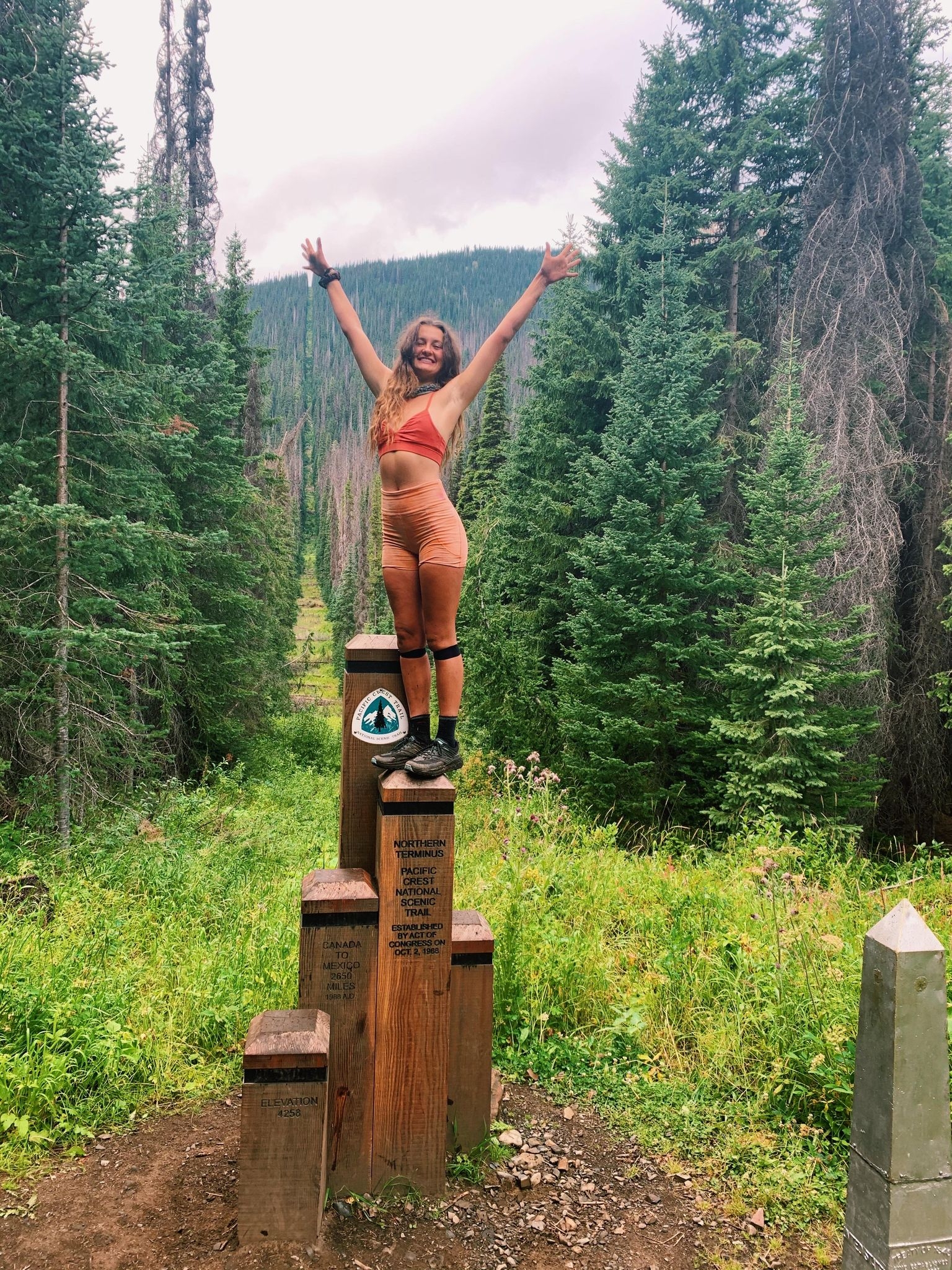 Now that the hike is over, Sarah’s adjusting to the pace of life back home before returning to school as a pre-med student. She remains ever-vigilant against the possibility of a relapse in her eating disorders. “Slowly it’s getting easier and better for me. I’ve experienced so much… I just hope I can use that to empathize with people when I go into medicine.”

For now, the future’s looking bright. Classes begin soon, and once the pandemic subsides, she hopes to teach yoga on the side while she goes to school. And as for future hikes? “Definitely I want to do the southern portion of the PCT… And then from there, the possibilities are endless.”