The Desert Continues (and Continues)

The fourth week started with a nero into Wrightwood and ended at a water cache eight miles south of Hikertown. In between, I found myself careening through PCT landmarks – Wrightwood! The Cajon Pass McDonalds! The Not-a-KOA campground! Agua Dulce! – while covering a decent amount of ground. Though I’ve by no means been “crushing thirties” I have increased my mileage. Because let’s be real – the desert can be a drag! I could cynically call this time period “my quest to get the fuck out the desert” because there is so much trail ahead and this sand slog can seem interminable. Yet I would bet all my gear that at the conclusion of this endeavor these desert weeks will have taken on a rose-colored hue and be solidified in my mind as my favorite part of the hike. No matter how challenging a day may feel, there always comes a moment when the heat lessens, the sky explodes into orange yellow magic, and you have to stop hiking to gape at the vast unfolding world.

Longer hiking days mean more time for the brief but ridiculous moments that distinguish one sun-soaked day from another. A hitch into Wrightwood was delayed because the driver had to tie parts of his Volkswagen together. Between Acton and Agua Dulce, I was hip-checked by the back haunches of a slow-moving horse whose rider assured me I shouldn’t move off trail; my left cheek was purple for days. I filled my water from a cistern that counted a dead rat among the floating debris but I didn’t have to drink it because there was an enormous water cache six miles later, plus cookies. After weeks of people leaving frantic warning comments on The App Formerly Known as Guthook about alleged sightings of poodle dog bush every time there was a lupine growing on trail, I finally encountered the devilish plant and watched someone promptly sit down in it. 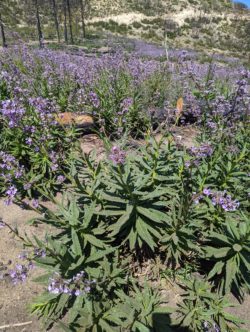 A Few Words About Far Out

If there are 50 NOBO permits issued a day between March and May, that means there are around 4600 aspiring thru-hikers who aim to hit the trail each season. Does everyone make it to Canada? No. Hell, a good number probably don’t even make it to Campo. But, save for the odd “I’m Old School” mansplainer who flaunts his paper maps while he denigrates GPS technology and puts iodine droplets in his water, I’d wager almost 100% of people make it to the app store on their phones to buy The App. THE APP! No, not Gaia, you nerd! I’m talking about Far Out. We hate to love it. It’s so fucking bad. Absolutely terrible.

First of all, there’s this irrelevant hiker-proclaimed hierarchy of what the thing is called. People who have hiked other trails, which usually means the Appalachian Trail, make a huge deal of “messing up” the name of the app: “On Guthook – I mean, ‘Far Out’ or whatever it’s called now – I saw that there’s PDB everywhere after Agua Dulce. Didn’t have that on the AT. Did I tell you that I hiked the AT? Class of 2019, baby!” It’s a passive aggressive way of underscoring the pointless fact that the individual has previously used an app while walking. BORING. (For the record, I used the AWOL Guide on the AT. Eschewed screens and shit. SOBO Class of 2017, baby!)

The second issue with the app, though, is the Fight Club factor: No one wants to talk about the app. Fact: We’re all using the exact same app for navigation. Fact: We all have access to the same comments and thus the same information. Fact: People will cherry-pick a single comment and start passing off said comment as indisputable fact: “I received word that the water in the next cistern is tainted because it’s filtering brown. Definitely going to skip that one and do a longer carry. You should, too.” Um, did the Forest Service call you and tell you that? Did the PCTA issue a statement? Or did you have a small ceremony wherein you decided that NoseBleed79 is the arbiter of truth and you’re passing off the same Far Out comment we all read as some hiker gospel in order to make yourself feel like you’re more in the know? Also, do you even know about pine needles, bro?

To be clear, without the app it’d be borderline impossible for us soft millennials and Gen Z’ers to do the PCT. Most of us have literally no backcountry skills and are just out here with our fingers crossed hoping the mercury doesn’t drop below 55°F and the trail remains an easy-to-follow dream route (spoiler from hundreds of miles ahead: it does!). Comments on things like water sources are extremely helpful and can be potentially life-saving. I just don’t understand why people can’t say, “I read in the comments of our shared app that (blank)” instead of being like, “I heard that…” or “I saw that…” as though they’re getting intel from a better, more reliable source than other hikers.

My personal way of approaching this odd situation is to refer to Far Out as “My Personal Secret Database.” For example, if someone asks where the next water is, I’ll say, “In my personal secret database, which only I have access to, it says there’s good water in nine miles.” When they ask what I’m talking about, I tell them Far Out and we have a giggle at the absurdity of the situation. (Kidding. I definitely say Guthook.)

The actual worst thing about Far Out, though, is that we lose where we are in a geographical sense. “The San Gabriels? No idea what those are. OHHHH, do you mean, like, the miles in the 300s on Guthook?” We know where we are on the app but we don’t know where we are on the map! A section hiker asked where I’d camped and I was like, “Umm…seventeen miles back?” Back! The fifth cardinal direction. I become the little blue dot on the red line slowly trekking uphill. I do not know how to unbecome the dot! A joy of long-distance hiking is seeing all that you have traversed in the grand scheme of things; that sense of progress and vastness is lost when you hold it in your palm. My favorite comment was at a potentially confusing turn-off somewhere: “Just follow the Altra footprints.” That’s where we’re at.

Will I delete the app? Fuck, no! I need to know what DotJayPegHikes thinks about every single trail town! 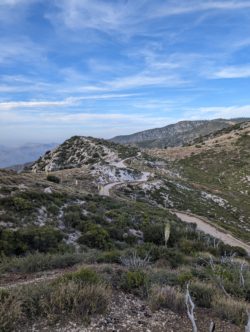 Whew! Who knew I had so many thoughts about the damn navigation app? I should really start listening to music while hike…

Five hundred miles, though! That’s cool. I just have to do it four more times, which seems less cool and more hard. For curious minds, despite all my ranting, I’m having a fabulous time. I guess what I find cringe-inducing is the seriousness with which people take the hike. Don’t get me wrong: In order to hike over two thousand miles, one must take the endeavor seriously. Indeed, as I hike forward I find myself fine tuning different things in order to improve my performance and hopefully increase my chances of reaching Canada safely. How can I use my poles most efficiently? What’s the order of operations in town in order to have the least time on my feet and thus maximize rest? Can I get away with one less liter of water and thus save weight and hike faster?

So yes, a modicum of seriousness is necessary. But there is an aggressive competitive vibe out here that I did not expect, one that is off-putting to the point of hostility. People ask “when did you start?” in order to gauge if you’re faster or slower than them, and then judge accordingly. They ask how many miles you’re doing a day and then claim to be doing more; how could this be true if we’re camping at the same sites repeatedly?

You could say “hike your own hike” but the phrase has been co-opted! I always thought it was a chill stoner-y phrase that meant people should just enjoy nature while leaving the trappings of our capitalist society back where we came from. But we’re in too deep! Our roots have infiltrated the trail; the rat race has moved from sidewalk to sand and scree. “Hike your own hike” is a swift and sinister judgement issued by someone with a superiority complex. If someone says it to you, it means they think your pack is too big, your pace is too slow, or your decisions are too poor. It’s kind of like the southern gem, “bless your heart,” which sounds like charming kindness but is really a way of expressing derision, distaste, and pity at the same time.

Perhaps the issue I have with over-seriousness – that’s what my hiker brain came up with – is a linguistic one. Long-distance hiking: Yet another area where toxic masculinity and the language of domination that seeps into so many of our lexicons in America presents itself. “Tear up that mountain.” “We fucking killed it.” “We destroyed that last section.” “Banged out a thirty-five mile day.” And the classic “crushed miles.” All these phrases are so common out here that I almost forget how aggressive and rage-filled they sound. Not only does language like this commodify the trail, making it into something that can be conquered and dominated, it separates the hiker and the trail into opposing entities, ensuring that a true connection will never be created. How can we expect to learn anything when we’re trying to “destroy” something?

Also, semi-related: What counts as big miles? More than 30? More than 40? What the fuck are big miles?? Can we just say miles? Or kilometers? Kilometers are so much more Saturday because there are so many more of them.

What do people want? Do they want to shoot the sun? Do they want to steal the moon? I just can’t wrap my head around why such a low key, unexciting, simple hobby – WALKING, which is what we’re doing – has to be amped up into this power-laden pursuit. I’m guilty, for sure! I’ve used the phrases; I’ve gotten to the top of a climb and said “I fucking crushed it.” but one main goal of a long-distance hike should be not to dominate but to be a tiny speck in an endless landscape. Walking for weeks and trying to angle the pieces together of where I could fit in and make my home, what I’ve realized is I can be at home anywhere.