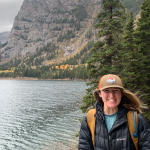 Done with the Sierra already?? Time flies when you’re having fun, they say. They’re right. After two off days in town doing all the fun things (bowling, mini golf, brew hangs, many visits to ramen restaurant), we took the trolly back to the trailhead.

The first day back on trail is always the hardest due only to the amount of food I consumed/inhaled in town. Luckily, the trail was good to me and was relatively flat or downhill that morning. We passed Devils Postpile National Monument, a natural anomaly of basalt that formed from slowly cooling lava to the shape of hexagonal columns. Nature is neat. We continued on and decided to take the John Muir Trail alternate so we could pass by more lakes (we love lakes!). We climbed that afternoon and hiked through a continuous swarm of mosquitos until camp. I enjoyed my dinner that night overlooking a lake with the mesh screen of my tent barricading me from those vicious mosquitoes. 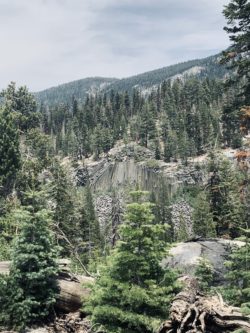 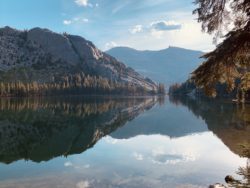 The next morning I sipped on my warm coffee as I moseyed my way down the mountain. As we descended, I began seeing Mount Ritter peering over the horizon and it eventually ended in an epic view of the mountain overlooking Garnet Lake. It was too good not to stop and eat a second breakfast. It feels surreal to be surrounded by such beauty at all times. Is this real life? We continued on and passed around Thousand Island Lake and up to Donahue pass. On top of the pass, I made my first icee slushee made from the remnants of snow and Mio energy. After a hot, sweaty climb, this treat hit the spot. The descent from this pass was no joke: straight downhill stone staircase. My knees may have been feeling it but the path provided views of a swirling stream slithering its way through the meadow below. We set up camp in this meadow and I fell asleep listening to the surge of the waterfall nearby. 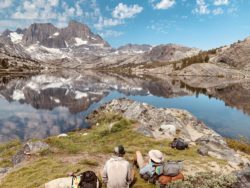 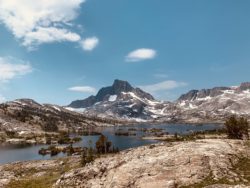 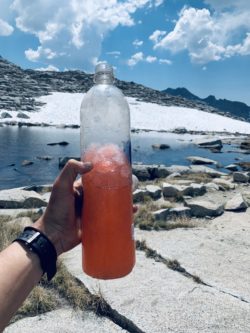 The next morning I woke up like a kid on Christmas Day. Today was Yosemite day! After nine very easy miles of trail that meandered through the flat valley, we hiked into Tuolumne Meadows and quickly jumped on the shuttle to take us down to Yosemite Valley. Fortunately, one of our friends, Link, used to work in the valley so he knew of all the cool, secret spots. If you did not know, hikers hate walking the most so we rented bikes and pedaled our way through the valley with views of grand rock faces all around. A heat wave had struck the west coast so we made a point to jump off the bikes and jump in the water every time we crossed the river. My favorite adventure that day was cave diving at a place called “The Straw.” We climbed, crawled, and shimmied our way through tight spaces to find the geocache box so we could sign our name saying we conquered the challenge. We camped at the backpackers campsite that night with a view of Half Dome hovering above. 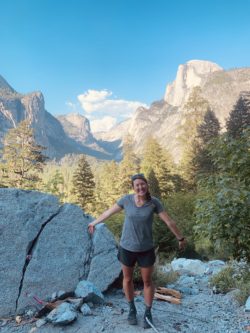 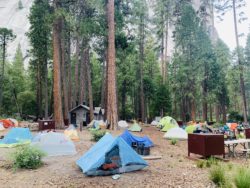 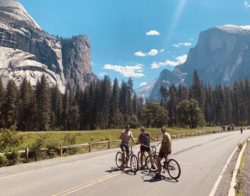 The next day we hitched a ride back up to the trailhead and set off on the trail. We chatted and reminisced on our memories from the previous day as we strolled to camp. We swam in the pool of the powerful waterfall at the Glen Aulin campsite to cool off before eating dinner and setting off to bed. 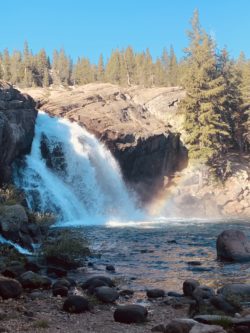 The next couple of days brought more passes, forests floored with bright green ferns, meadows with streams and waterfalls, and best of all.. wild flowers! Even though it’s the end of June, it feels like spring time in these mountains. Purple, yellow, red, pink. So much color. Lupine, Indian Paintbrush, Mule’s Ear, Aster, Poppy. I’m in love with the beauty. 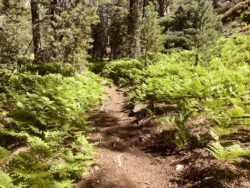 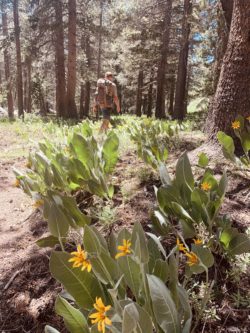 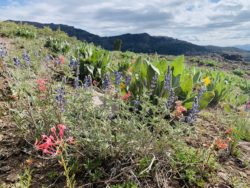 We also passed a big milestone… 1,000 miles!!! We did it! We celebrated and sang “Thousand Miles” by Vanessa Carleton all day. We pass a lot of mile markers but this one felt extra good. The next day we woke up early to climb Sonora Pass in order to catch the shuttle to Kennedy Meadows North in time. I hate waking up early but boy was this sunrise worth it. It seemed as though the sun and I were racing to crest the mountain, we tied. Sonora Pass marks the end of the end of the Sierra Nevada mountain range which provided me with an epic view of the jagged rock, snow capped mountains as I walked along the exposed, scree filled ridge while the sun rose. As I passed over the ridge, the landscapes drastically changed to lush, green mountains. Welcome to Northern California. We made our way off the mountain and took the shuttle to Kennedy Meadows to enjoy a real bed, real food, and to celebrate the end of the Sierra. 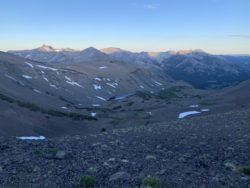 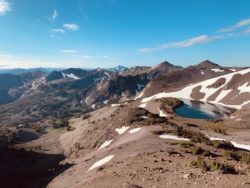 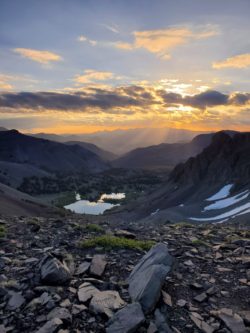 We hiked out the next day and enjoyed the new views of green grass, flowers, and tree filled mountains as we made our way to Lake Tahoe. We got smarter and started making fires at dinner time to smoke out the mosquitoes. It was nice to be able to eat dinner surrounded by my friends again instead of hiding in our tents. 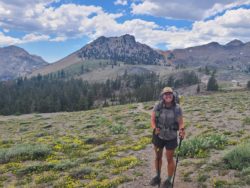 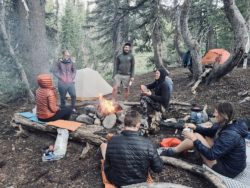 One day we happened upon the best trail magic we have received thus far. A group of random, kind strangers spending their weekends in June grilling hamburgers and passing out ice cold drinks. We may or may not have spent three hours there. Food coma is real. 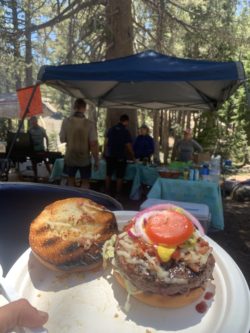 After four more days we made it to town and are now enjoying a rest day swimming in the lake and preparing for the next leg of our grand adventure. 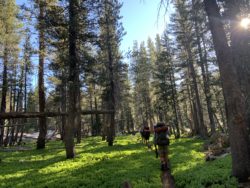 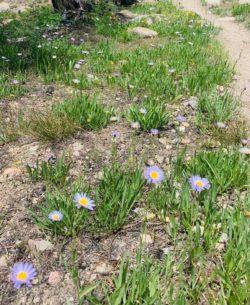 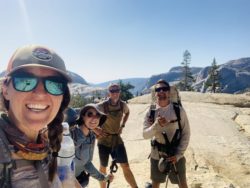 Just a girl who likes to hike and camp. Acute care PT from Birmingham, AL --> PCT thru hiker