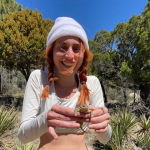 Having a car for transportation is something I had definitely taken for granted. As convenient as it was to prevent the racking up of parking tickets I tend to accumulate in my college town, hitching everywhere isn’t the easiest. When your motel is around four miles from the nearest hospital and you are hurdled over into a pale hunch on the floor, you walk to the emergency room wishing you had a ride. From poor hospital memories as a child, sickness and overall clinics were something I tried to avoid. I dismissed the term, “Giardia” as a made up curse and determined it couldn’t possibly happen to me as I wouldn’t be able to handle that. My emetophobia (on top of that lovely agoraphobia), has tainted every stomach virus as a near death experience and has caused me to avoid it at all cost. While looking to be transformed on the trail, maybe this will be apart of that experience. Maybe I can re-write the story about the hospital that I so feared as a child. So I am going to tell you a different one. A story of all the wonderful, stupidly pitiful, and hilarious events that occurred in the past couple days and what has come as a result.

It’s common hiker knowledge you filter your water at every natural stream before consumption. Sticking to that law, my co-hiker and I never skipped filtering, no matter how fresh the water looked. Starting in the snow, we passed by multiple hikers taking a quenching dip into the natural water from the snowfall. Tempted to not filter, I kept in the back of my mind, what sources were safe and what weren’t. Approaching Quincy, I ran across some “clean” looking springs that came about from mountain snowfall, and decided to take the risk of sipping. As the snow disappeared, the area became dryer and showed longer distances between our water sources. As dry as the water sources in the burn area were becoming, the rain washed us out and we were ironically as soaked as we were thirsty. The discomfort of the storm caused quick breaks that day and led me to take a quick drink of the last creek we were to see before hiding into our dry abode. (For how scared I was about stomach sicknesses, that was the stupidest decision I have ever made).

The stomach cramps started the next day very mild into what I had perceived to be my three-cheese fettuccini dinner I had the previous night (yes, that was the biggest splurge in a long time). I’ll save the rest to the imagination of the readers for the more gnarly bowel movements that followed. Not wanting to pass the burn scare, my co-hiker and I turned around and started heading back to hitch from a minimal traffic road into Quincy. We became anxious as we saw the only option was to take a day walking into town or hitchhiking on only half a day supply of food. Thinking we had it rough, we ran into two men that had run out of food days previously. Calm and collected, the men had survived on purely ketchup and mustard packets. We then sat with them for over 7 hours trying to hitchhike and ended up calling a trail angel to pick us up. We were saved shortly after and taken into Quincy for burgers and a night stay.

As that pain in my stomach got insanely worse, I tried to walk to the ER in the middle of the night and gave up to return to my motel to try again in morning. When I awoke, I decided to take the bus to the local hospital. Holding my guts together, I clenched the front seat as the bus came to a halt. “We’ve got an extra special guest joining us today”, said the bus driver as she opened the doors and a Turkey hopped on the bus. A TURKEY. How could I even be upset when I had a turkey riding next to be to the hospital. The rest faded in and out into a lucid dream that ended in the nightmare of being told I had to get off the trail due to multiple bacteria infections that led to severe dehydration. Heartbroken, I reflected on my previous experiences and decided it was all meant to be. Whether it was hiking 1,000 miles to getting off by hospital orders… I had faced everything that I had ever feared. I had re-experienced some of my poor childhood  memories into what has now been the coolest experience I could have ever asked for. In the end, you shouldn’t have to hike a certain amount to prove to yourself or others how strong you are. You are just as strong as before you started to after you finished. Do it because you love it and as I have fallen more in love with our earth… I‘ll continue emerging myself into it. Keep chasing the thrill and do yourself a favor of filtering your water!! It’s not a goodbye PCT, It’s a see you later (will be thru-hiking in the future). Until then, time to explore a trail only moments from my apartment, The Arizona Trail!!

Hi, my name is Rachel! I am a daughter, an older sister, a young student at my home state university, a mom to a black cat named Lola, a lover of nature, wearer of cat socks, admirer of swing dancing, and most importantly, a PCT hiker. I find comfort next to our world’s natural creations or surrounded by those who share my heart. I embrace vulnerability, sensitivity, and honesty in all I do. In the end, if you have the ability to be yourself, you have everything. This being said, I have no idea how to begin such a special task and hope we can figure it out together in our journey. I cannot wait to see how this unfolds.