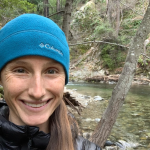 We’d just set up camp in a wash near a small snowmelt lake, probably one of the few exposed locations in the dense forest. It was around 6pm when I saw a large smoke column over the hill, apparently coming from near the pass south of us. I tried to get a better vantage point, but our level ridge didn’t provide one. Instead, I watched as air support started flying overhead.

We knew a fire had been burning about 3 miles east of the PCT the day prior, but we’d already passed that by 6-7 miles. Could that fire have made a run north? I wondered. But that seemed too far.

A helicopter flew past. A minute later, the helicopter flew back overhead and tilted slightly to look directly at me. I stared blankly back up at the pilot, wishing there was a way to communicate before it flew away. I immediately jogged down to the little lakelet where my husband was filtering water. “I think we need to get out of here”, I exhaled. Moments later, the helicopter returned and the pilot waved at me to get my attention before throwing something out of his window. We ran to find the object – a message tied to an empty soda bottle telling us to evacuate to the trailhead.

The nearest trailhead at Windigo Pass two miles to the south was in the direction of the fire. The next nearest trailhead was 11 miles north at Summit Lake. We decided to hike north away from the fire and get as far as we could toward the lake. No trails exited east or west between the two locations. Luckily, as we went up in elevation we quickly got a vantage point to the fire as well as a sufficient cell phone signal to call dispatch.

“Do not hike back toward Windigo Pass,” they said. “The fire is moving north toward you, so just keep hiking north. Tell any hikers you see along the way.”

After a pause, the state police officer said assertively, “The trail is now closed.”

A perfunctory cadence took over as we walked along the ridge, which was quite beautiful. I stopped periodically to appreciate the view and to see how much distance we’d made from the fire. We’d had lightning and thunder earlier in the day — the cause of the fire. As the evening progressed, more clouds gathered and dry thunder, lightning and erratic wind persisted. The smoke became more omnipresent, giving the air a yellow and then and amber tint as the sun went down. Eventually, we tucked into denser forest and began a descent to Summit Lake. Twilight provided enough light to hike for longer than I anticipated it would.

Finally at 10pm, about half a mile from Summit Lake, we found an open area about 100 feet off trail to set up our tent. I anxiously wanted to get to the lake, feeling a sense of comfort being near a forest service road and a large body of water. “We need to stop,” my husband said. “We’re safe here; we have plenty of distance between us and the fire”.

Still, I woke up to the smell of smoke at 4am and began to pack up my gear to make our way further. Now 10 miles ahead of schedule, we decided to hike the 20 miles into Shelter Cove that day.

We walked along the road adjacent to Summit Lake and began seeing trees that had recently fallen across the road. Climbing over one, we encountered an abandoned trailer in the middle of the road. What the hell happened here? I wondered. 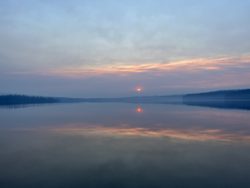 We arrived at a car-accessible campsite and sat at a picnic table to make water and take a moment to decompress before we hiked on. A hiker we had seen the day prior approached. “Man, that wind last night was crazy!” he said, rubbing his sleepy eyes.

“What wind?” I responded.

“There we’re, like, 60 mile per hour winds over the lake last night,” he explained.

Ah. I thought. The trailer and all the downed trees make sense now…what a night. We were lucky to have averted both hazards.

After gathering ourselves, we sleepily made our way to Shelter Cove near Willamette Pass. We were a comfortable distance from the fire and could take our time and appreciate the beautiful scenery. We felt oddly grateful as we realized we were some of the last people to make it through the pass before the trail closed.

I also reflected that, while I was anxious, I never felt panicked. I always knew what to do next, even if that thing felt difficult.

When we arrived at Shelter Cove in the late afternoon, it was flooded with hikers. We learned that hikers were coming not just from Crater Lake around the closure, but also all the way from Northern California due to a fire closure we hadn’t yet heard about.

The buzzing nervousness was overwhelming.

“We should just skip up to Washington at this point…”

Hikers were getting in and out of rides, some arriving and then leaving within 30 minutes. Everyone was frantically trying to figure out what to do next. It was difficult not to conform to the energy.

We decided to relax and take a day off to let things calm down and continue on with cooler heads.

Reflecting that next day, I was reminded of the importance of knowledge and preparation to help remain calm when faced with an on trail hazard. I met a number of other hikers with similar experiences on different sides of the fire — who had to take into account their particular circumstances and make the best decision given those factors.

Fires on the West Coast seem like bears or wind or snow on the trail at this point — they aren’t just a possibility, but a probability. 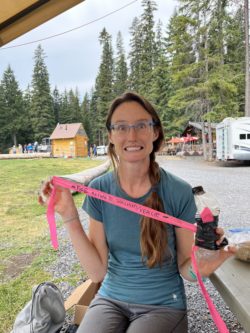 I’ve been section hiking the PCT for the past 5 years and the longest section I’ve done thus far is about 200 miles along the John Muir Trail. I absolutely love backpacking - the sense of accomplishment that comes from doing something physically difficult, the moments of catharsis when you get done climbing to that 12,000 foot pass and the view at the top is both beautiful and earned, the sense of peace that comes with settling into a routine on the trail, and the list goes on. I am excited to get out for a longer adventure on the trail this year! As someone who lives with Multiple Sclerosis, a degenerative neurological condition, longer days on the trail have gotten a bit more difficult these past couple of years. But, gosh darnit, I just love it. So, I’m tossing all my excuses aside and prioritizing spending a couple months on the trail this year. The plan is to hike about 650 miles from Castle Crags in Northern California to Cascade Locke. I won’t be putting down many high mileage days, but I’ll be trucking along out there and I hope you’ll follow along with me. Hey, more time to smell the roses…er, pine needles…right?!