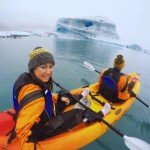 Struggles with Foot Pain in the First 100 Miles

The struggle is real.

So far I have only hiked 110 miles of the PCT and those 110 miles kicked my butt. I have struggled with injury after injury as well as a lot of mental breakdowns.  I knew coming into this that it wasn’t going to be easy physically, but I never thought I would struggle this much both physically and mentally.

It started day one. I was so excited and nervous at the monument. We arrived at the trailhead early, 4:30 a.m., and it was dark and cold. It felt unreal to be there and to be setting off on this adventure. I almost cried. 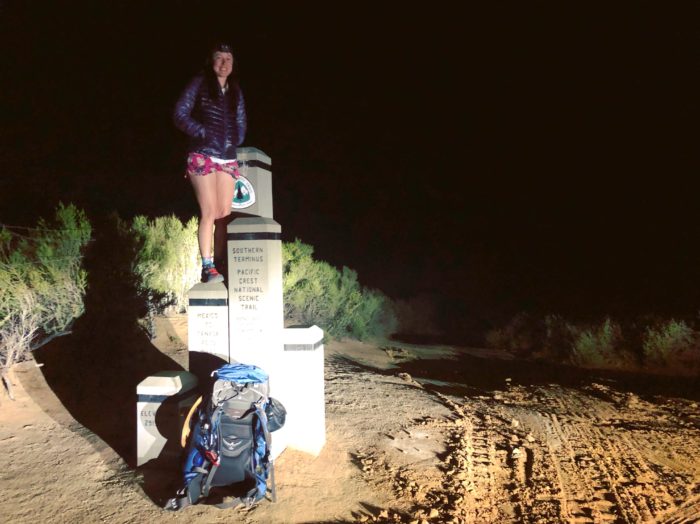 It was so hard to take that first step away from the jeep and Shaelan and go off into the dark alone. Once I was out on the trail and the sun started to rise I felt a lot of my nerves fading away and just was happy to finally be on the PCT. Physically I felt pretty good for the first five or six miles but that was short lived. At around mile ten my feet started to hurt bad. I’ve had severe foot pain before during my years of running cross country in college, but this was different. I just keep thinking, “Oh, it will go away after I settle into the the hike.” But it didn’t. It just got worse. I started feeling a pulling pain in the arch of my right foot that was very worrisome. Originally I had planned on making it to Lake Morena on the first day but I barely made it to Houser Creek. I arrived there around 5 p.m., took off my pack, and found a spot with cell service and called my mom. I broke down in tears, telling her I wasn’t sure if I really wanted to continue the PCT. She calmed me down and gave me a pep talk, told me to eat some food and get some sleep. That was the best advice I could get that night because I had been awake for over 18 hours. The next morning I woke up feeling a lot less sad, still in pain, but ready to keep hiking. 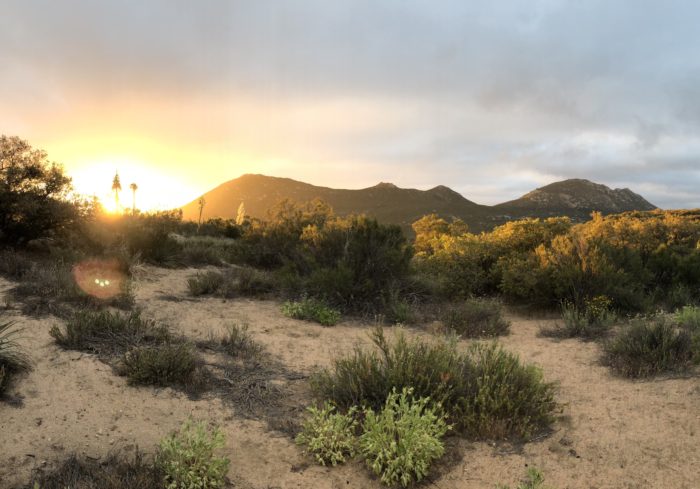 After the first day I cut my miles back to around ten a day to try to keep my foot from getting really injured. I wish I could say that worked but unfortunately the pulling pain turned into a ripping pain in my arch. It took me four days to get to Mt. Laguna; I originally thought it would take me two and a half. 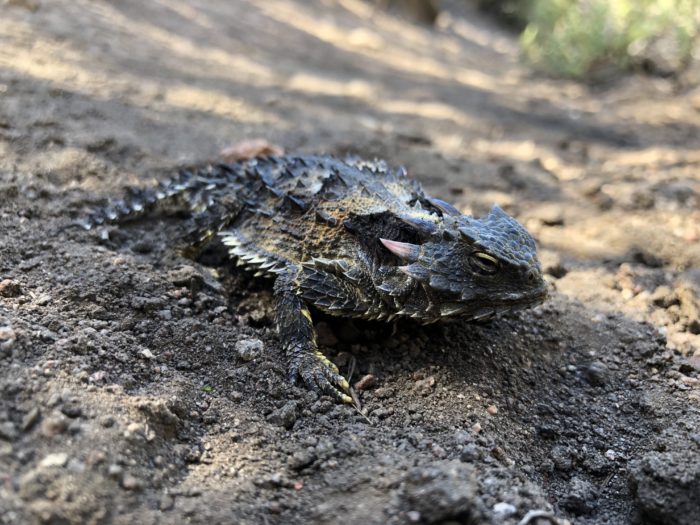 I limped into the cafe, ordered a beer and sandwich, and finalized plans to get off trail for a few days to deal with my foot injury.  I met some fellow hikers and we ended up splitting the cost for a cabin for the night. 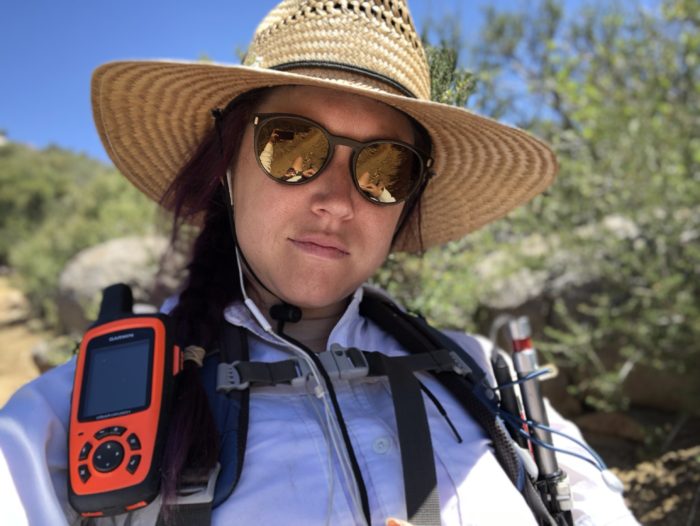 The next morning Shaelan picked me up to take me back to Twentynine Palms for the night. We stopped at REI to get some better insoles for my shoes, ones with more arch support, and I also picked up some KT tape. I figured out that the pain I was having in my arch was plantar fasciitis, which I had once before in high school that knocked me out of running for months.  After two zero days I stepped back on the trail, hopeful that the tape and insoles would do the trick in stopping the foot pain. They did not. 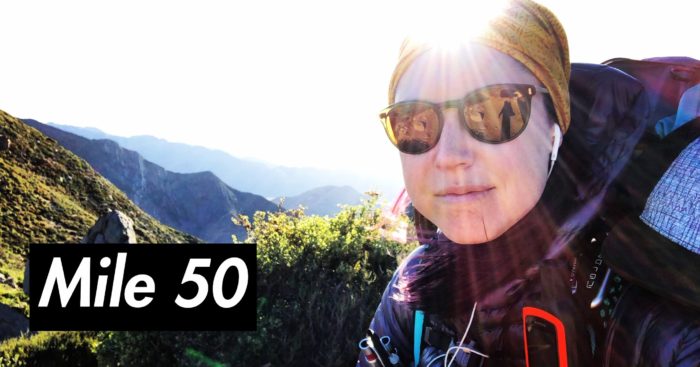 The ripping feeling was still happening in my right foot and my left foot was starting to have symptoms of plantar fasciitis. But overall the general foot pain seemed to be less intense so I thought maybe the tape is helping enough. I ended up hiking about 20 miles that day so that I could find a spot to camp that was somewhat out of the wind. I was so proud of myself because that was my longest day so far on the trail. The next day I only had nine miles to Scissors Crossing. I thought it would be an easy hike to the road and planned to just have an afternoon in town get some food and get back to the trail that night. I didn’t realize that I had overdone it on my feet the day before and that I would be crying once again as I limped my way to the road.

I made it to Scissors Crossing and got a hitch into Julian. I booked a room at the lodge and went to Mom’s to eat my free slice of pie. 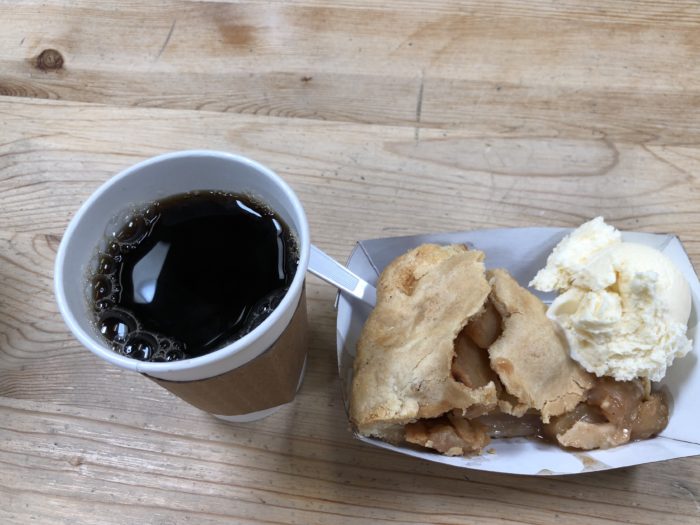 My feet were once again wrecked after only a couple days back on trail. I was seriously questioning if I was capable of doing this trail. As I was walking down the road to the brewery I heard someone yell out of a passing car and turned to see Carl, a thru-hiker I met in Mt. Laguna. He was getting a ride into town with a trail angel named Ghost. They gave me a ride the rest of the way to the brewery and Carl and I had a couple beers while we discussed the trail, my feet, and our plans. I had planned on getting back on trail the next day but was talked into taking a zero in Julian. I soaked my feet countless times in the bath and iced them. Carl and I ate a lot of good food, did a little wine tasting, and drank more beer.  It really was a much needed moral boost and I was glad to have a hiking buddy. 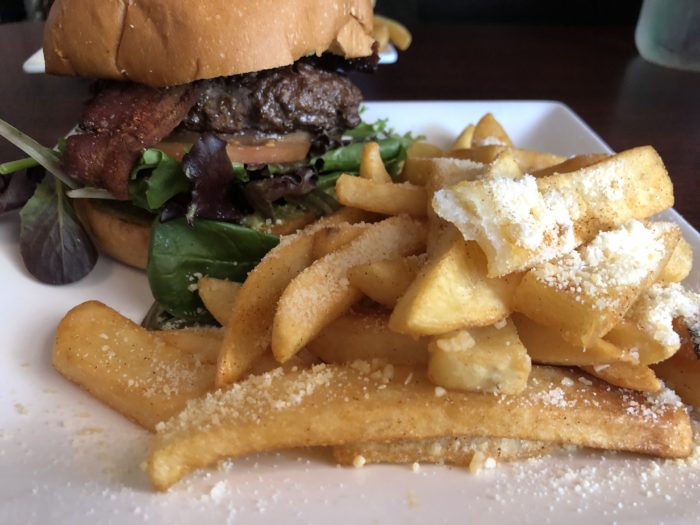 We hit the trail midafternoon the next day and it was hot! We made a plan to hike 14 miles to the next water source and camp there for the night. Carl took off ahead of me; he is much faster hiking uphill than I am. I made it about five miles before the intense foot pain started back up again. All I could think was, “How is this even possible? I just rested my feet for a day and a half.” I found shade and took my first of many long breaks that day. 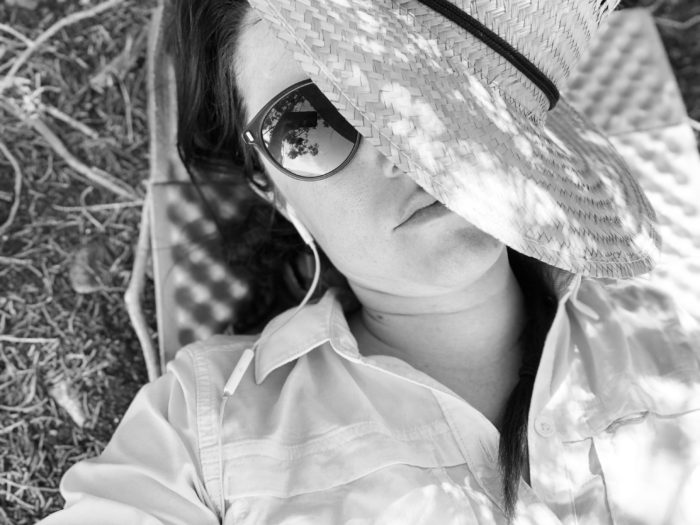 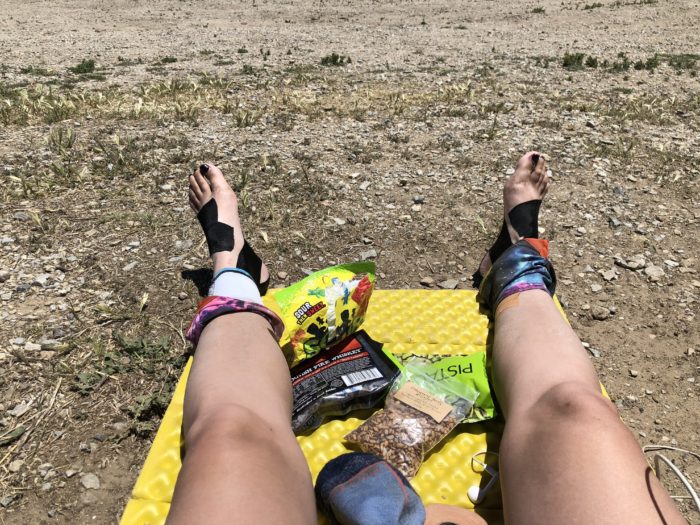 Every break I would take off my shoes and socks and put my feet up and stretch them out. I made it to camp just after the sun set.

We had 18 miles the next day to Warner Springs. I knew that was going to be a struggle for me after the painful 14 miles I just hiked. I figured I would be able to do it if I split up the day in two. Hike about ten miles and take an hour or two break and then finish the rest. Good plan but my body had other ideas. My right hip decided to start having a shooting pain all the way down my leg and my feet made it about four miles before the pain started up again. 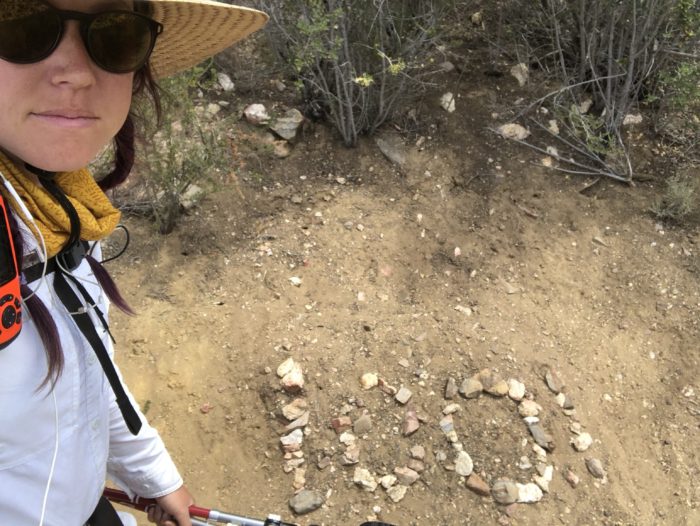 I made it to the 100-mile marker and took a good long break. While I was there I had another “Why I am doing this?” moment. Carl texted me while I was there and said he ran into Ghost again at a road crossing a few miles from where I was and that if I wanted he would give me a ride to Warner Springs from there. I declined. I didn’t want to miss any trail miles. I hiked and cried and hiked some more until I made it to Eagle Rock about three miles outside of Warner Springs. I texted Carl, who was already in town to see if he could find someone to come pick me up there. I could hardly put weight on my feet at all. Somehow I got lucky and Ghost was there again to come to the rescue. I got to Warner Springs and set up camp with some help from Carl, and our new trail family. I knew I needed to take off more time and figure out a better solution for my constant foot injuries that were only getting worse. After talking with the group I decided to take off at least a week. 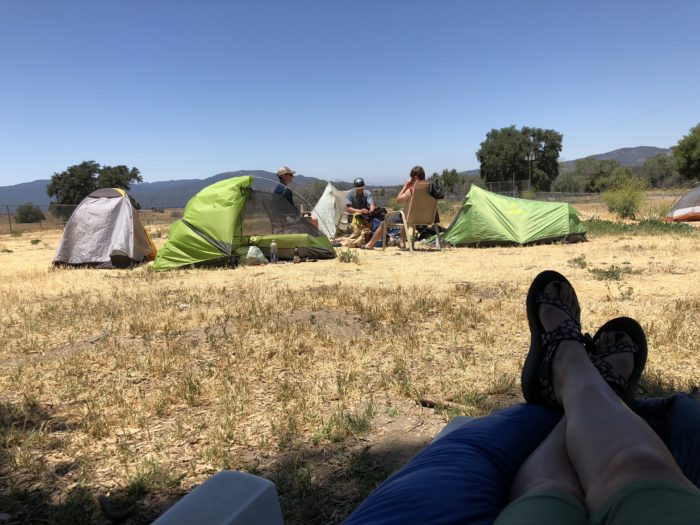 Which is where I am now. It has been eight days so far off trail. I got new shoes, the Hoka One One Speedgoat 2. I think the Altra’s zero drop might be one of the reasons my feet ended up so injured. I also have been resting, icing, and doing Epsom salt baths for my feet. I am planning on getting back on trail within the next few days. I made the decision to skip ahead and meet back up with my trail family in Big Bear. It was hard to decide to skip miles but I will come back and hike them this fall since I live nearby. My feet are not 100 percent better but I don’t think they ever will be. I really hope I am able to finish the PCT this year.

Overall it has been a million times tougher both physically and most definitely mentally on the trail that I ever imagined. I think the biggest battle I have ahead of me is the mental battle, struggling with self-doubt and the overall feeling of disappointment and failure for not being able to just power through the pain. I am grateful for the support from my family and my trail family. I don’t think I would be getting back out on trail if it wasn’t for them.

Also on a more positive note. While in Warner Springs, Carl gave me my trail name, Tidbit, because I am full of interesting tidbits of information.

Thanks for reading. I will try to blog more while I am out on trail.

If you haven’t already, please check out my YouTube Channel Wandering Brittney.

My name is Brittney and I will be hiking the Pacific Crest Trail in 2018. This will be my 1st thru-hike. I was born and raised in Texas but since then have moved a lot for my old job as a Park Ranger. During my five years as a ranger I traveled and worked in many different National Parks in California, Utah, and Alaska. While I no longer am a ranger I still am passionate about protecting theses beautiful wild places and promoting stewardship and Leave No Trace values. Hiking the PCT has been something I've wanted to do for years. After losing my job this last summer I decided that this is my opportunity to do it. So this May, as I turn 30, I will be beginning the journey of a life time. Feel free to also check out my Youtube Channel, Wandering Brittney. Thanks