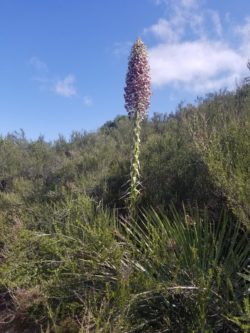 After eating breakfast with the group of hikers I had camped with, I shouldered my pack and said my goodbyes and thank- yous, and headed for the trail.  It was a fun moment, with everyone excited about their hikes ahead.  I approached the group with my pack on, and someone asked, are you heading out?  I nodded, and they all cheered.  I said, see you down the trail!

I walked back to the southern terminus monument and took a good look around at the desert in the morning light.  Pretty, with cacti, scrub, more flowers than you might expect, more diversity than I had expected too.

The sandy path winds over and among boulder-laden desert hills for several miles to begin.  It was a great feeling to glide along, with so much to look at and without too much effort.  I was floating high on feelings of gladness to be out hiking again. 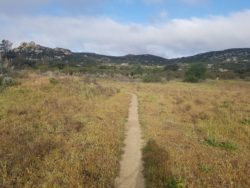 Pretty desert scenery within the first few miles of the trail.

Throughout the day, it was neat to see mountains appear and near, canyons appear and near.  The morning mist cleared quickly, so I soon had opportunity to put all my dorky (but necessary) sun attire on- hat, glasses, screen, even gloves! 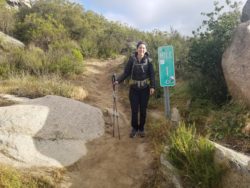 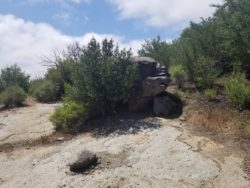 A shade patch- this was a great break spot on that first day. Shade spots are held much more precious out here.

I took a few breaks throughout the day, and during those breaks, was often passed by other hikers.  Everyone seemed so friendly and excited to be out.  We often asked one another, “Where are you planning to stop tonight?”  And, “How are you feeling, how’s it going so far?”  It was fun to have that sense of shared adventure with everyone. 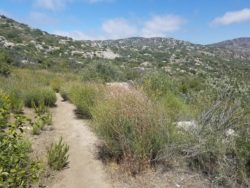 At one point, I stopped and played my little travel banjo in a shady spot, looking out at the mountains around.  I thought that was pretty nice, and gave day one a “yes” response to the question of whether it’s worth it to carry this instrument or not.

I felt so relaxed and content in my routine, in my decisions to take breaks, knowing how much time was left in the day, and in my plans of how far to walk that day.  It’s been a great feeling to come to this trail with the AT experience to draw from. 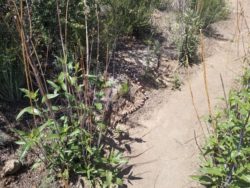 First rattlesnake! This was not a close call, I had plenty of warning.

Towards the end of the day, I met two friends around my age, who are planning to hike the trail together.  We were hiking up and over Hauser Butte, the final climb for the day, when one of them said he needed a break, then threw up on the side of the trail.  Heat exhaustion!  We hiked slowly and took many breaks then.  The other friend had mentioned that he’d been an EMT, and I said, are you a good EMT?  when he kept teasing his friend and telling him that he would make it.  He threw up his hands and said “whoa” at that one 🙂  I think he was a good one though- he gave his friend Emergen-C, told him to try to eat a snack, and we all sat in the shade for a while, then kept taking frequent breaks in the last few miles.  It seemed like the dehydration led to severe leg cramps then- fortunately he felt a whole lot better the next day. 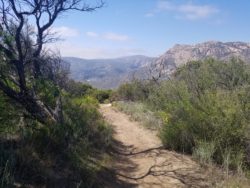 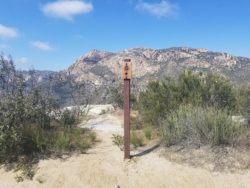 Approaching Hauser Butte, towards the end of the day. 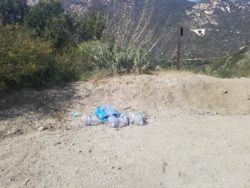 Example of water supply that was probably left here by some helpful trail angels (people who help hikers).

Eventually, we made it up and over the butte, and headed down to Lake Morena, where numerous other PCT hikers were also camping.  It was a typical hiker hangout atmosphere there- people sitting together around campfires, some lying in their tents, lots of laughter.  I went with a few others to the camp store/grill- one day out and we were all craving “real food” already.

The stars were out bright that night, the mountains surrounding the lake made for an absolutely idyllic scene, and I fell asleep in my tent to the sound of friendly chatter and even a mandolin playing somewhere nearby.

It was a good first day. 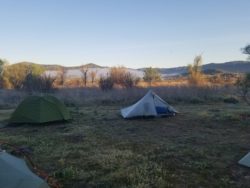 Camping along Lake Morena, with mist gathering over the lake. Peaceful setting.