Some backpacking gear is consumable, and I expect it’ll need to be replaced during a thru-hike. Other gear, I’ve always assumed to be durable enough to last many years if I’m careful with it. However, before hiking the PCT, I only used my backpacking gear for about two weeks annually. Now I realize that some items aren’t as durable as I thought, and they’re likely to fail during a five month hike.

Less than two weeks into my 2021 PCT hike, the zipper on my REI Quarter Dome 1 started to fail. At that point, the tent had been used for approximately 70 nights. I tried returning the tent, but it was slightly more than two years old. REI did recommend a local repair shop, but the cost to replace the zipper was almost as much as a new tent. Instead, I bought a Nemo Hornet 1P.

Less than four weeks into my 2022 AZT hike, the zipper on the Hornet started to fail. I’d used this tent for about 70 nights too, which probably wasn’t a coincidence. If the zippers on both tents have the same dimensions, tolerances and wear-out mechanism, I’d expect them to fail after a similar amount of use.

After some online research, I discovered that lightweight tent zippers need to be regularly cleaned and lubricated if you want them to last. I also found a fix for my worn-out zipper that would extend its life by a few weeks. 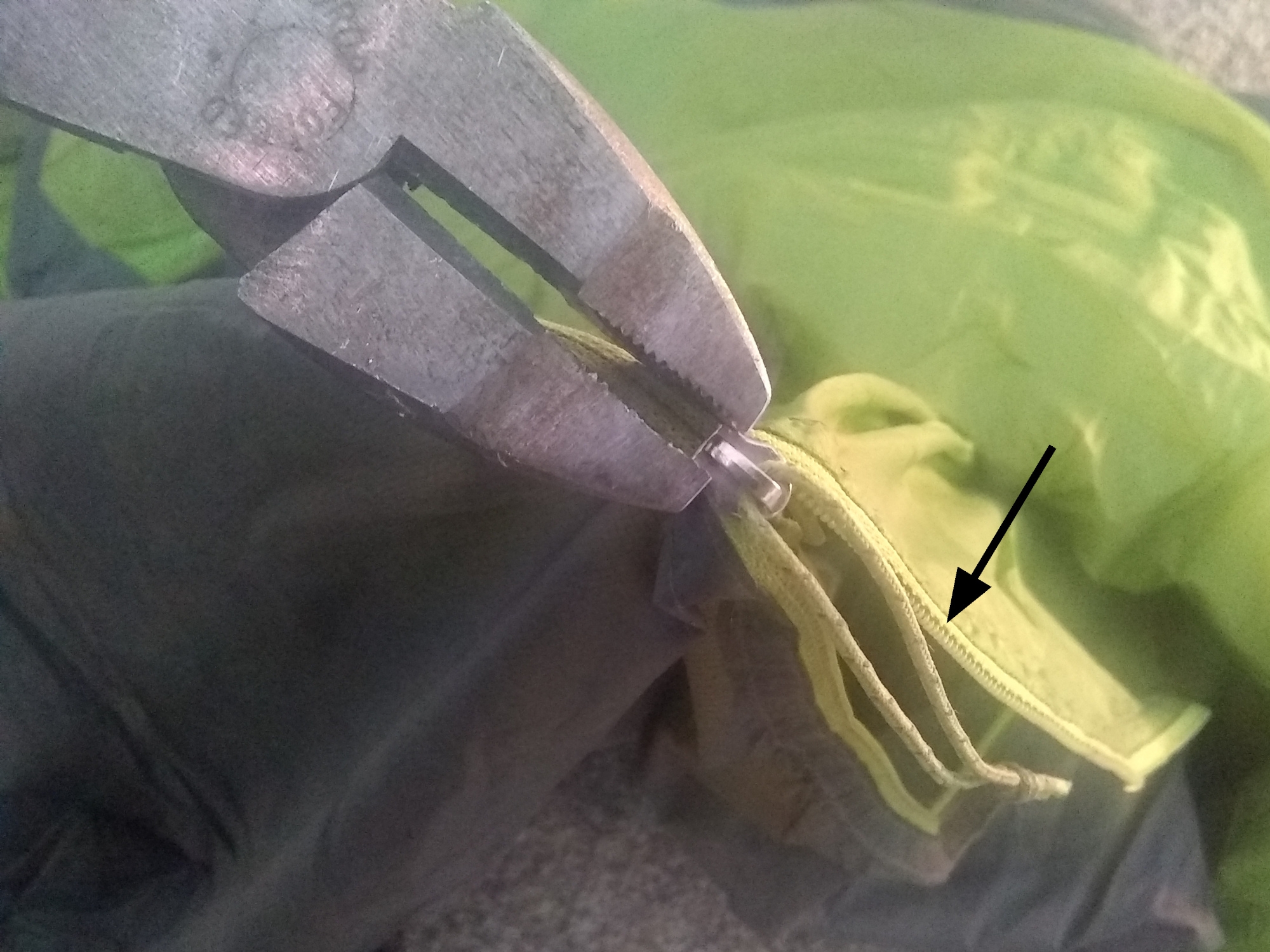 Extending the life of a worn-out zipper.

The repaired door worked for its five weeks of use during my hike of the northern California PCT in 2022. The zipper was temperamental, but with a little practice, I found a technique for closing the door that worked pretty consistently.

I also started using the zipper as infrequently as possible. Prior to the fix, once my tent was set up, I closed the door after putting each piece of gear inside. This minimized the number of mosquitoes that flew in, but it meant zipping and unzipping the door several times. Instead, post-repair, I opened the lower section of the door (the section parallel to the ground) just once, and left it open. Everything fit through the gap without any problems. Tent zippers seem to wear out pretty quickly, so this is something I’ll keep doing in future.

These workarounds suffered from an obvious problem: more mosquitoes than normal got inside. Which brings me to a mini-review of the Nemo Hornet 1P. I have very few complaints about the tent, but using white netting for the walls was a mistake. Once inside, a handful of sneaky mosquitoes would evade the inevitable daily massacre, wait until the coast was clear, then feast until they were too heavy to fly. When I spotted them clinging to the tent walls, I vengefully squished every one of the little suckers. By the end of week one, the inside of my tent resembled a scene from a horror movie.

Here’s another mini-review. The REI Quarter Dome SL1 that I bought to replace the Hornet is a similar design to the Nemo, but has a roomier interior and vestibule. It also has a more time-consuming rainfly. And black netting.

The Thermarest Neoair Xlite was the most comfortable sleeping pad I’d ever used, right up until the baffles started to fail. Once one baffle unstuck, the ones next to it followed suit every few days. The result was a large bulge in the shoulder area shown in the picture below. The pad had been used for about 100 nights, and was almost a year old.

I submitted a warranty enquiry on the Cascade Design website, and the automatic reply wasn’t encouraging, “It could take up to twelve weeks to hear back.” However, I heard from them the next day, supplied them with some extra information, and received a replacement less than a week later.

On the PCT in 2022, I camped with a SOBO hiker whose Xlite had the same problem, which means it’s probably a common failure. If you’re planning to buy a new sleeping pad, or any piece of gear that might not be durable, I’d recommend delaying the purchase until just before your thru-hike. That way, you’ll maximize the chance that when it wears out, it’s still within its warranty period.

Of course, if the baffles had failed at the head-end of the pad, I wouldn’t have minded as much. I’m surprised sleeping pads with a built-in pillow don’t yet exist. 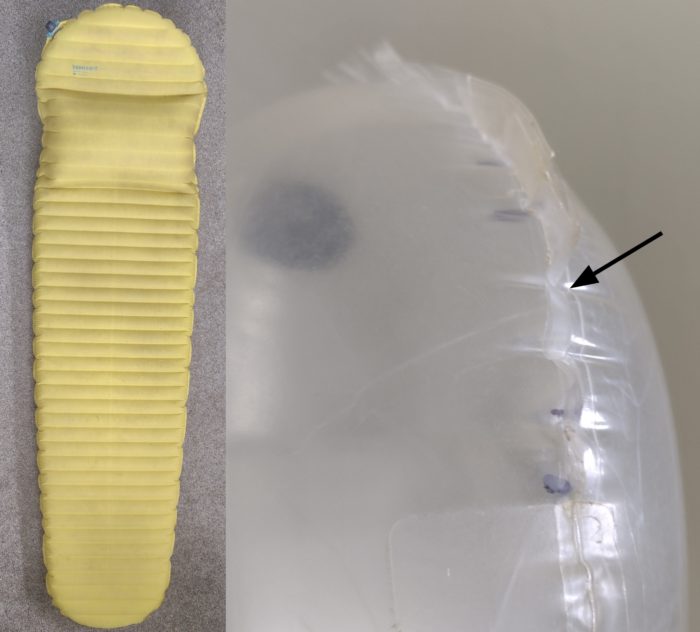 The Cocoon Air-Core Camp Pillow has two features I like.

The air-core is made of clear, rubbery plastic, and has a seam where its two halves are bonded. Every time the core is inflated, creases form along the length of the seam. In the picture above, there’s an arrow pointing to one of these creases.

The air-core sprang a leak after slightly more than two years. During that time, I inflated, used, and deflated it about 170 times. I found the leak at a seam/crease intersection, and tried to fix it on-trail using a patch from my sleeping-pad repair kit. The fix was unsuccessful, and I later discovered air escaping along the seam underneath the patch.

I also found leaks where the seam intersected three other creases, and tried to fix them with rubber cement from a bicycle puncture repair kit. The repairs held for two nights, then the pillow started deflating again. I’m now using a Sea to Summit Aeros instead.

At my first campsite on the PCT in 2022, I tried to mark a waypoint on my five year old GPSMAP64. The unit responded, “Database Error”, and gave me no more information about the problem. A factory reset didn’t fix it. A Google search for the error suggested that several Garmin models suffer from it, but didn’t provide any solutions. After I returned home, I managed to fix it.

You could also restore just the data you need. I didn’t bother with multiple profiles or languages. I also didn’t restore the huge amount of geocache data that came pre-installed.

(If you’re using the Farout app, it allows you to save custom waypoints. However, there’s currently no way to export them.)

My CNOC Vecto sprang a leak, and my Sawyer filter continued to clog. I’ll go into detail in my next post.