To start this journey, I flew from visiting a friend in northern Utah, down to San Diego.  I was glued to the window on the plane ride down, fascinated by how the high snowy peaks transitioned to desert, and then from green desert to arid sweeping desert in some spots.  Not being from the west, different things stuck out to me that might not seem odd to a local: green crop circles from central pivot irrigation, even in the middle of the desert, and what looked like so many unpaved, brown dirt truck trails in the middle of nowhere.   Who uses and maintains those roads?  And how much water does a desert farm require?  Also, what is it like to live and work on a ranch, seemingly so isolated from the outside world? 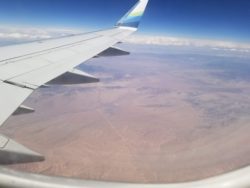 Looking down on sweeping desert, with dirt roads, somewhere in California. 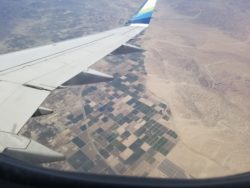 Of course I was also thinking, wow, I think I’m going to be walking through some of these desert landscapes!

San Diego was another wonder to me.  I checked into my hotel room and then walked over to the nearest oceanside park.  As travelers often say, I felt like I was in a different world, walking through San Diego neighborhoods.  Low, colorful one-story houses built with plenty of windows and natural light, showy flowers, and trees, many of which I had never seen before.  Many succulent types, suited to the drier climate, and also many brilliantly colored flowers.

It was also neat to see the Pacific Ocean and walk along the rim of it on a park path.  The cliffside is eroding into the ocean in several places, and there are signs all over to stay back from the edge…doesn’t seem to keep people away though.  I saw many walking beyond the signs, right on the cliff 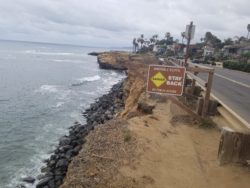 edges.  Some walking, plenty running, some doing yoga while facing the ocean view, among the golden flowers. 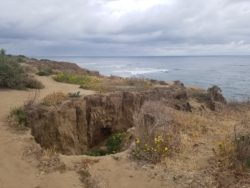 The next day I decided to walk the 4-5 miles to the San Diego Metro Station, from the hotel.  (It seemed kind of silly to me to pay for transport from hotel to metro station, when I’m about to walk, hopefully, for months on end.)  The plan, outlined in my PCT guidebook, was to take the trolley and then a bus, out to the rural town of Campo, and the PCT southern terminus.  2-3 hour metro/bus trip from San Diego.  It was really a neat feeling to walk along more harborside walking paths, towards the tallest skyscrapers of downtown, with this big pack on my back, already going on an adventure.  I got plenty of stares, and sometimes the question, are you going to hike the PCT?  Followed by more questions about that.  I enjoyed chatting about it with the curious.  I ate a hiker lunch sitting in a park in the downtown area, just eating my beef jerky and snack bars after having passed by several fine dining establishments, and thought how I wouldn’t want to be anyone else or be doing anything else right now. 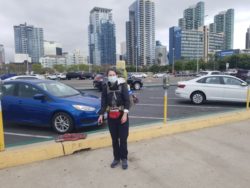 I’m not sure if I’d enjoy walking through a big city quite so much, under other circumstances, but everything I did was underscored by a sense of adventure and wonder.  I stopped and took so many pictures on that walk, and took in all the sights.  I passed nurses working outside at a homeless outreach clinic, and was approached and offered an extra vaccine they had on hand!  I let them know I’d been vaccinated already.

I spent a long time at the metro station, figuring out which trolley line I needed to take, how to get a ticket, and when/where/how to board.  It was a joy to be there alone and have all the time in the world to study the signs and figure it out, learn something new.  No one impatient with me, or with that process.  I walked around the station just about three times, looking around, until I followed the signs to my line and bought a ticket.

I successfully rode to my stop, then boarded the bus at El Cajon Transit Center to get to Campo.  There were no other backpackers on the bus with me, but the driver seemed well familiar with hikers- he eyed my pack and told me we’d be to Campo within a few hours.

The ride winding through the desert hills was so beautiful, increasingly steep and windy, with desert scrub and granite boulders all over the hillsides, and I thought again, I can’t wait to hike out in this landscape!

From Tecate to Campo, I was the only passenger on the bus, and the driver was chatty.  He stopped at Campo and got off the bus with me then, and was telling me things he knew about the PCT.  We were standing there only about 30 seconds before a truck pulled up with “Pacific Crest Trail” painted on the side.  Two middle-aged men got out and approached.  They looked like seasoned hikers, wearing outdoor gear, and looked like they wanted to talk with me.  I 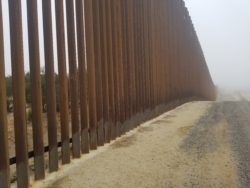 said “hi” and they explained that they were spending time camped near the PCT start, gathered with other starting hikers, camping together.  They were also there to try to answer questions and offer advice to hikers starting the trail.  They offered that I could camp with them and the other hikers there.  It was getting late, and it was misty outside, and I took them up on the offer.

This encounter reminded me of the trail culture that surrounds these long-distance trails.  There are so many people out there who stay connected to the long-distance hiking community or a particular trail by offering help and support to current thru hikers.  It’s a wonder, and often touching, to experience that enthusiasm and generosity.

First, they asked if I wanted to see the trail monument at the start of the trail, and they drove me (about a mile from the bus stop) close to it.  One of the men asked if I wanted someone to go with me, and I said sure, that would be fine.  The southern trail terminus is within 50 feet or so of the border wall, and the hiker with me said that we could go look at it.  Looked pretty solid and high in that section- these tall metal thinly spaced posts, buried deep into the ground.  We got to talking about refugees fleeing their countries, and what drives people to attempt that crossing.  I said, it’s a weird feeling, isn’t it?  People are fleeing for their lives and we’re here, starting a long thru hike for the next few months.  The hiker then told me his philosophy that we can’t do anything about the conditions in Nicaragua, but we can be kind to the people in our orbit, and for him, that has meant hiking and sharing his knowledge, experiences, and support, with others.  It was said with confidence, and I kind of wished there had been more doubt or grappling there, but oh well.  I’ll just have to keep pondering that one on my own, over the next 2000+ miles 🙂

Then we took a few photos at the monument and walked to the camping area.  Long story short, I met some other hikers who w 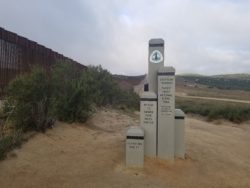 Southern terminus of the PCT.

ere also going to start the next day.  We introduced ourselves, chatted, ate together, listened to lots of hiking stories and advice, and then crawled into our tents.  I thought about how excited I was to actually get started hiking the next day!