Getting to the End of the Desert (May 28)

At this point, we are finishing up some final days of desert hiking, each day getting closer to Kennedy Meadows, a place on the trail known as a transition spot.  (Kennedy Meadows includes a general store, camping areas, and outfitters- it’s a place where hikers can rest up before continuing on towards the next section of trail.)  The transition is a transition from desert to the Sierra Nevada range part of the PCT.  Kennedy Meadows also lies around mile 700, so hikers generally feel accomplished to have hiked that much mileage by the time they reach this point.  I’ve seen from videos that sometimes hikers sitting on the general store porch will clap each time a new PCT hiker wearily walks up to the store.

This day was one of my last in the desert before Kennedy Meadows.  I woke up at my site at Walker Pass Campground, with some other hikers nearby, and started hiking by 0700.  It was a late start by hiker standards, but still early enough to be pleasant and pretty out. 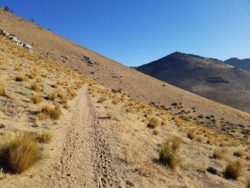 Hiking up from Walker Pass. Pretty morning. You can see all the trekking pole holes on the side of the trail from all the hikers who have hiked this already. 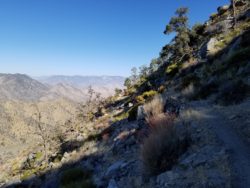 A whole different view on a shady mountainside that morning.

I had been hiking more miles per day this week than ever before (sometimes 30+ miles in a single day!), for a few reasons.  The moon had been really bright at night lately, and sometimes I woke up around 0400 and decided to take advantage of the coolness and open desert, and walk out under the moon for a while.  What an adventure!  I would only very reluctantly hike in the dark in a forest on the AT, but hiking in the open desert feels a lot different to me- I feel more secure in the fact that I can see everything around me, with only low growing chaparral covering most of the ground.  I was also typically hiking late into the evening, enjoying hiking at that time of day.  The hot afternoons I slogged through at a slower pace, but usually still covered ground.

Part of my motivation was that I was starting to feel stronger- they always say, you’re getting your “trail legs”- and part was doing longer miles to be closer to the next water source in the morning.  We’d had to carry water to last us over 10 miles, sometimes closer to 20 miles, day after day.  I was really looking forward to hiking up into the Sierras, where I had been told water would be much more plentiful.

I thought the views from Walker Pass (mile 651) northward to Kennedy Meadows were really beautiful, and could even imagine coming back someday to see that area again.  I guess it’s a popular day hiking area too- I had noticed as I was camping overnight that multiple day hikers, as early as 0300, started hiking this mountain under moonlight!  As I was mostly sleeping, some hikers walking on the road above my tent passed by and said, “There’s a tent!” at that hour.  I’m not sure why they were surprised; I laughed at that some.

I started the long ascent up from Walker Pass and noticed that I had phone service there, and had service in different high places throughout the morning.  It was such a good feeling to be able to text home and touch base on a few things throughout the day.  I’m out here on this adventure, but I sure do feel better when I can stay in contact frequently with my home supports.

The hike up was a climb, and windy, but offered some really beautiful views.  I noticed that now I can hike longer without needing a break due to fatigue…though it seems I’m starting to develop the “hiker hunger”.  I might not need rest breaks, but I need more snack breaks than ever before.  I’m sure some of it is the higher mileage starting to catch up to me.

It does feel gratifying to reach this level of fitness again- back to how I felt when I hiked the AT, and would climb entire mountains without feeling too bad at the top.  It is one of the gratifying realities of hiking all day, every day.

On this day you could start to see some stark granite outcroppings (I think they were granite) on ridges nearby, and the trail also passed among some scraggly pines at different times.  The trail also led over some areas of scree (small rocks) on these mountains, which were hard on the feet, but different, something new in the landscape.  And more of what I call “puffy sand” that you sink into with each step.  That’s always a balance exercise and seems to fatigue the joints more than anything else I’ve come across. 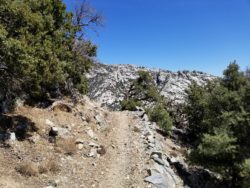 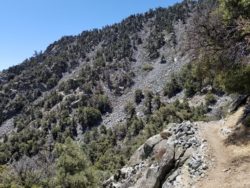 Later in the day I descended on the trail to some hot desert and started looking around for a shady break spot.  So were two older male hikers in front of me.  They said I could share their shade spot under a few pines if I wanted, as there wasn’t much shade to be had.  It was a good break.  They told me about some of the antics they had observed in other hikers’ behavior, and it got me laughing.  Really their main point was that the trail has felt crowded lately, which I can attest to- I came across a register recently and noted 30 hikers had passed by in the day ahead of me.  Complete solitude is not something to be found easily out here, lately.  These men were voicing concerns and dreaming of ways to make their own space on the trail.  One joked around and said, “At Kennedy Meadows, I’m going to buy an 18 pack of beer and lay it down on the picnic table and tell the hikers, “Have at it!” and then we’re going to hit the trail while they’re distracted!”  I thought that was pretty funny.  An interesting tactic, with an underlying bitterness…

What can I say?  I’ve noticed and complained about the crowds lately too, but I’m glad to be out here, so it doesn’t feel right to complain for too long about other hikers being out here too.

Later in the afternoon, I came to a small creek trickling down a mountainside.  Somehow it was strong enough that moist greenery lined the sides of it, and I even smelled mud as I paused by it.  It reminded me of home, really stuck out even though it was just some weeds by a creek, something I wouldn’t even stop for on a hike at home.  It smelled great!  I took a picture before stepping back out into the arid desert.

I hiked further up in elevation and looked down on all these mountains blue on blue spreading out to the horizon in layers, and a creek below that I’d stopped at, and dry yellow desert hills that I’d climbed up to reach this point.  Pretty evening.  Admired grey rock spires covered with bright green moss cresting one set of mountains.  Just looked so old, like they’d been around forever.  Kind of sobering, humbling, and grand.

I finally got to my goal camp area for the night.  Lately, when I stop for the day, the first thing I do is devour food, I get so hungry.  I saw another tent nearby and knew I’d sleep well, knowing someone else was nearby.  Recently we’ve been hearing a lot of talk of bears roaming in this area.

It was just another day on the trail, with some scenic, humorous, or peaceful moments.  For some reason I thought about how when I finish the trail, I’ll miss days like this, days when I was hiking towards Canada but could take the ending for granted, and just enjoy the day as “another day”.  I felt really glad to be out in the fresh air and sun again today, just hiking another day.