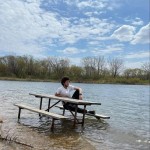 I thought I’d be writing my first post long before this. I also thought I’d be taking a zero day (a full day in which you hike 0 miles) long before the 20th day of my hike. But here I am, at the Mike Urich cabin halfway between the towns Snoqualmie Pass and White Pass, just south of the 300-mile marker.

It’s difficult to believe it’s been 300 miles already — it feels like I walked past “100” and “200” spelled out in rocks just yesterday. No matter how physically challenging the activity, when you fall into a comfortable routine (especially a routine that advances you at least 20 miles per day, regardless of terrain), the miles & days start to fly by.

20 days in, my routine has become fairly consistent. I wake up at 5:30am on the first ring alarm and listen to the others in my campsite start to gather their things. I check for condensation on the inside of my tent and deal with it accordingly. I pack up my backpack and prepare my morning oatmeal (cold-soaked in an empty Jif jar with raisins and peanut butter powder). Finally, a check over the campsite, a few quick stretches, and it’s out onto the trail by 6:30am. From then until the night’s intended campsite — which gets further and further away every day as my legs get in better shape — the goal is simple: walk. To many friends & family back home, the trail seems so exciting — gorgeous vistas and surprisiju, spontaneous meet-ups with fellow hikers — but the reality is wonderfully mundane. If in the course of a 24-hour day, I hike from morning until night, eat enough calories (4000+), sleep long enough, and follow Leave No Trace principles when using the restroom, my day has been a resounding success.

I make my routine out to be simple, but it’s only recently that I’ve gotten so comfortable with it, only in the latest phase of the hike. Town stops are a useful tool for narrativizing the phases of a hike because they carve out discrete sections that feel, and often look, quite different.

First, there was Hart’s Pass to Stehekin, which started with a 30-mile trek in the wrong direction (North) to tag the Canadian border and (probably illegally) walk just a few steps north of the silver obelisk that marks the line between two nations. Looking out on the 30-foot wide clear-cut line in the forest stretching as far as the eye could see East & West, it was difficult not to think about how some of the most arbitrary delimiters can become the most meaningful. Standing in the middle of one forest with one ecosystem, but two nations with two politics, one trying to reopen following the pandemic and the other shutting all its borders to stop the spreads. But there isn’t much time for these sorts of thoughts on this hike — and I, having not read the news in over a month, am certainly unqualified to think them. A few precious moments to stare at the border, sign the log book, stare at the names of so many hopeful Southbounders (SOBOs) and two brave NOBOs who already completed their journey, post with the wooden monument, and I was off again, this time in the right direction. From that step forward, all miles count.

I was fortunate enough to have my friend Maggie hike the 60-mile border tag with me — a ride to the trail and a piece of my past (and future) chapters to carry me into this new one. So, when I dropped her off at Hart’s Pass en route South and continued 6 miles to the campsite, I thought it might be my first night alone on trail. As I quickly learned, it’s much more difficult to camp alone on the PCT than I anticipated. A new friend, Ginger, provided some welcome company and comfort when curious deer & buck decided to investigate our campsite in the middle of the night.

Many of us come to the PCT (especially southbound) for solitude, yet are hesitant to camp alone. Ginger and I ended up camping together the next night and hiking together too, after she caught me enjoying my “John Muir Moment” (as she called it) atop a snowy mountain pass. I was grateful for the company when a 2-hour windy downpour and 3000-foot descent bushwhacking through jungle-like brush threatened hypothermia if we stopped moving.

We would have camped together a third night, 11 miles away from where the stehekin bus picks up, had a new friend I made while hiking convinced me that 6 more miles (for a total of 24, my longest at the time) was worth it for a shorter morning hike to the bus stop. He was right, though the thunder in the sky and pain in my feet for the final few miles had me questioning. My new friend — Carl, a mechanical engineer turned dogsled kennel operator from Minnesota — and I spent the night with two other SOBOs: Tamara, a middle-aged former vet from Fairbanks, Alaska, and Lost Boy, an AT alumnus with a complex hammock setup. While we sat around the table — a luxury provides by the North Cascades national park campsite — eating dinner, I asked Lost Boy: “Do you cook or cold soak?” Armed with a jar of Jif Natural, a jar of Nutella, a hunk of summer sausage, and a block of cheddar cheese, he replied: “I eat.”

Stehekin was the closest thing is seen to a party on trail — familiar faces from all around Hart’s Pass together in the same town for their first food resupply. A group of us — Devon, Carl, Tamara, Kirk, Big City, and I — lounged around the patio all afternoon, trading thoughts about the PCT and other trails, talking far more about future sections to be hiked than reflecting on past scenery. In my interactions with other hikers on trail, they all seem to be a forward-looking bunch. Always thinking about the future, the next thing to hike, but in a far more near-term & practical fashion than the existential spiraling my friends & I often spent our weeknights doing in college.

The party ended on the bus out of Stehekin, as well went our separate ways in the same direction. Some took it easier, shooting for 15 mile days. Others, like Devon, hit the trail like they were running from something. Carl (now Balto), Big City, Tamara (now Doc), and I found ourselves an ambitious, yet reasonable, pace: 20 mi/day, completing the 110-mile Glacier Peak Wilderness stretch in 5.5 days. Of course, we set this goal without attempting to gauge the difficulty by looking at elevation change on the map. If we had, we might have realized that this stretch is one of the toughest sections on the entire trail, with more elevation change even than most of the Sierras. Nonetheless, we surpassed our 5.5 day goal. Sure, it was physically exhausting, but that was part of why I chose to do the PCT.

Those 5.5 days landed us in Skykomish and the first indoor bed I’d had in weeks. Already, that feels like weeks ago, as we’ve knocked down 3 more sections since Skykomish, but there’s too many events & beautiful sights to write down, too little time to write it in, and the allure of my sleeping pad is too compelling at the end of each night. So, that’s all for now.

Hi, I'm Joe! I just finished studying computer science for four years in college and am now in a lifelong pursuit to avoid technology whenever possible. First step: attempt to hike the PCT southbound, starting in July '21.