Spent the night at Lions Den Hostel with Birdy one last time before starting this trip. I got a ride up to the pass with Mary who runs the hostel. The road up may seem intimidating when looking at videos on YouTube but it wasn’t that bad at all. Stopped at one particular spot where Mt. Goats hung out and was graced with seeing three of them out on the rocks. 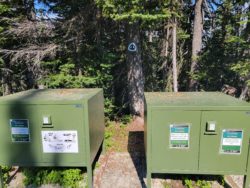 After being dropped off at the pass started looking for the bear boxes. These boxes are being used by SOBOs to store food for the return trip. Since I need to hike 30.5 miles to get to the Canadian border to even start, being able to store food for the next 50 miles South from here is a blessing.

The start of the trail wasn’t that bad, I’m already missing Birdy and I do seem slow with my inactivity the last month and a half. Luckily the climb up to the pass alleviated any initial climbs to start the day. There are alot of ups and downs but nothing that was seriously strenuous.

It’s nice and sunny, and not to long after starting I begin running into SOBOs returning from their trip to the border. It is nice getting some intel on what to expect up ahead. It seems the popular spot to stop for the day is at a large meadow just before Rock Pass. This meadow is about halfway to the border and there are alot of people camping here.

The next morning starts what all the SOBOs coming back say is the most sketchy part of the trail so far. There is still a snowdrift at the top of the Northern part of Rock Pass. The Pass is quite steep and even with footsteps in it, I would agree that I am outside my comfort zone about this. I actually crawl along the top of the snow where there is hard rock to get around it. The switch backs are pretty long going down but the addition snow I encountered was not bad at all, was able to go right over it no problem. At the bottom I run into someone coming back who asked about the snow. I let him know if I can make it across he would have no issues. 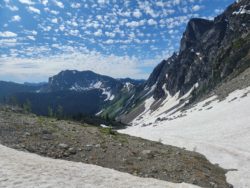 The rest of the day goes great. The climb up Woody Pass seemed long, but that is what climbs are. At the top I sit for a snack and would run into three other hikers going to the border. There is also snow at the top of the Pass that towered a good 12 feet over the rock. The younger guys went sliding down it while I ate.

Once I’m done snacking then it is a bit higher along Lakeview Ridge, which is the highest point of the trail in the State of Washington. Great views of the lake below and up in the slight breeze and snow. The climb down to Hopkins Lake means alot of bugs, as long as you keep moving they do not bother you. As I turn into Hopkins Pass there is a steady breeze blowing and that gives me the opportunity to stop for lunch and not worry about bugs. 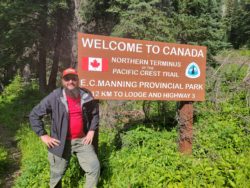 After lunch is the long downhill to the border. Since I am making good time I decide to stop and take a break at Castle Pass, the bugs are horrendous, so I put up my tent and hang out, even a little nap. The other three hikers come in soon after, they stopped and had lunch at Hopkins Lake. They do not stay long and move on. I get going after an hour break and finish the last few miles to the border. It gets very overgrown towards the end but finally making it there feels great. Going to camp here and start Southbound in the morning.

Had a great evening, camped with Geoff, George, and Chris. All doing their first trail. I do not recall any rain at night so it was surprising that going back South would be so wet. The overgrown bushes were soaked with dew and it did not take long to be completely wet right away. 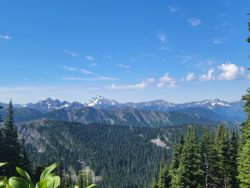 Ran into a couple of Northwest Pacific Trail hikers who were bagging the border also. And since the NPT coincides with the PCT for a few miles, I will run into a few more hikers. The trail going back to the meadow seems to come back faster the second time through. Must be because I was just here, but even with just one day difference the snow on the top of Rock Pass had a significant melt. It was much easier going up than down the day before. Getting back to the meadow was just as many hikers as the previous night.

Getting back to Hart’s Pass ended up being a tough day. I felt a pain in my left foot that started to nag at me. Enough so that I started taking more breaks than normal. What really kept me going was running into hikers that we also starting out for the border. It is a pretty neat experience seeing hikers that are both one or two days ahead and behind you. Really enjoyed the conversations and excitement in everyone’s journey. Including some hikers who were only out for a section of the trail. 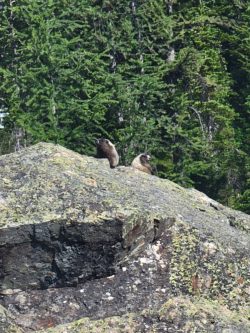 At Hart’s Pass, I decided to stay at the campsite near the Ranger Station. I grabbed the food that was stored in the bear box and enjoyed all the notes that Birdy wrote on the bag. Realized I packed way to much food. Keeping what I wanted for the next 50 miles of trail in my bear vault and stored it all into the bear boxes until next morning. During the night I would be harassed by a deer. He wasn’t aggressive at all to me but really enjoyed tearing apart the dead tree near the tent. I just let him have his fun and slept the rest of the night.