” The mighty Sierra, miles in height, and so gloriously colored and so radiant, it seemed not clothed with light but wholly composed of it, like the wall of some celestial city.” -John Muir

The Sierra truly begins with the first major mountain pass. This is when the thruhiker climbs over Forrester Pass, gulps the thin air at 13,000′ and drops precipitously into the wintry bowl of Kings Canyon National Park, that will consume them for the next few weeks. It is an indescribable experience that pictures and videos cannot capture. My friend, Frost, described the Sierra as “Switzerland, if you took all the people and all the buildings out of the country.”

We awoke at 5:00am at frozen Tyndall Creek to climb up over Forrester Pass. Frost and I quickly got ready and were set to go by 5:45am, but Bingo was not. I tried to wait for her, but she insisted that we move ahead, pressured by our waiting by her tent.  Reluctantly, Frost and I climbed the pass without her. There was a very long approach to the pass in hard snow. The last half mile was very steep and included an ice chute that had Frost nervous, and when she nearly tripped over her hiking poles, it appeared she was going to plunge to a horrific death. We reached the summit and glissaded down much of the icy, steep, backside of the 13,000′ pass. Glissading is the art of sliding down the mountain on your butt. If done properly it can be a safe and fun way to descend a steep slope. Unfortunately, on part of a rocky section I joyfully crashed into a few boulders and ripped my pants. Frost’s confidence grew with this climb and we celebrated our first big pass by eating lunch by a creek below the snow line. 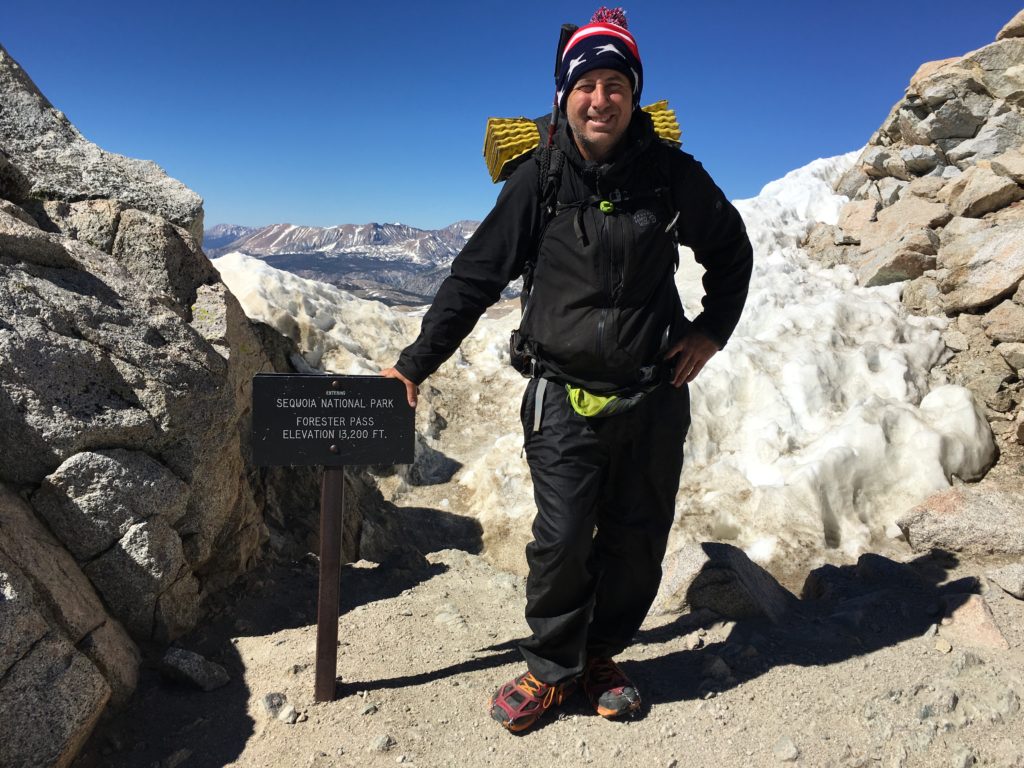 Bingo Gets Rescued Off Forrester Pass

Falling behind in the morning, Bingo never caught up with us. She slowly made her way over the pass, but slipped quite a few times on the backside, and injured her hip badly. The pain got to be so bad, she began fainting and dry-heaving. She was alone and scared. Many hikers came upon her and helped care for her and carry her to a safe spot. Eventually, she activated her SPOT device and a helicopter rescue was neccessary. Many people helped her get to safety, and we thank the many hikers that aided and comforted her in her desperate time. She is recovering nicely in Fresno, and may have to rehabilitate her injury for the rest of the summer.

Mather Pass does not immediately follow Forrester. Glen Pass sits between them and features a very steep northern slope that was covered in a few miles of snow. Mather Pass, however, was the most frightening and steepest on both sides. We climbed the pass in the late afternoon and there was one 30′ section where we climbed a vertical wall of slushy snow at over 12,000′. I had faith that others had done this so I could swallow my considerable fear of heights and proceed. I plunged my ice axe into the snow wall and tried to pull myself up. The axe moved through the snow like a speeding bullet through jello. Useless, absolutely useless. I managed to scale my way to the top without looking down. I got to the top and coached Frost with some encouraging words. She didn’t want to hear it. She barked at me like woman in labor.

Despite my ineffective exhortations, she made it to the top and we were all so very happy. The snow on the backside was so soft and the slope was difficult to descend on our feet, so we glissaded most of the section. Where we couldn’t, we postholed our way into the arms of the green valley at sunset at set up our tents in the first warm night of the Sierra. 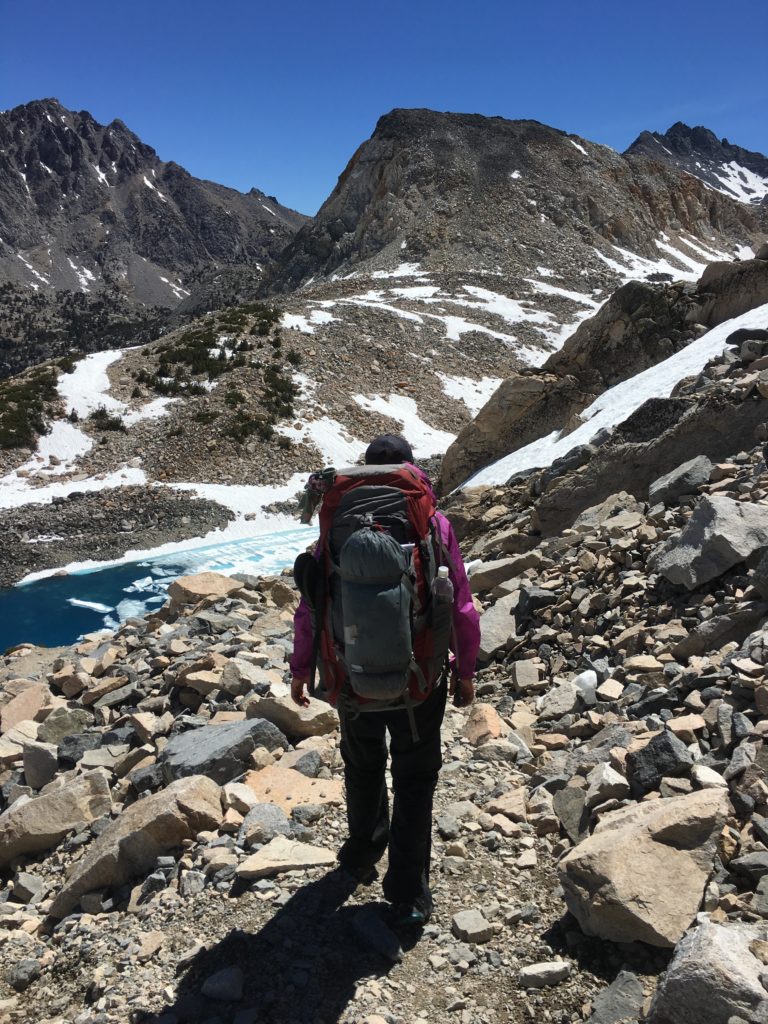 Once we crossed Mather Pass we traversed a couple more snowy, but less dangerous passes over the next two days. When we began the ascent of Muir Pass, we knew it was the last 12,000′ pass on the PCT. We again rose at 5:00am and moved up the longest snow climb to date. We stepped in several frozen creeks and rose up the tortuous snow field that lie before the stone Muir Hut that sat atop the Pass. We were so happy to reach the summit because we knew the toughest part of the Sierra was now behind us. We had finally got our lungs adjusted to the elevation, and now we were going to drop down a bit. The elevation had been my biggest obstacle to date. Overall, I felt the desert was mostly easy. The gut punching thin air of the High Sierra was a different story. I was constantly out of breath for the past week or two. Labored breathing was typical even when lying in my tent. It’s a seldom discussed challenge of thruhiking this trail.

After we crossed Muir Pass, we set our sights for two days on Vermilion Valley Resort. It would be our first opportunity for “real food” and some resupply in quite a while. When we arrived we immediately attacked a reasonable breakfast. Ressupply was spotty at best. The store had very little for hiker food. Some of the product was expired and looked as though they had pulled it from the hiker box. I scraped together a bag of candy, a Danish, a bag of Fritos, and the last good ramen packet in the store. This would have to last me two days on trail. I augmented this bounty with three cans of Coca Cola, one of which fell out of my pack as I walked out of the store and sprayed all over my legs. Despite the paucity of supply at VVR, the people were nice and the boat ride off the resort was delightful.

Many Rivers to Cross

There are endless rivers to cross in the Sierra. Some you can skip across but at least four or five a day include knee to hip deep raging water that your feet get soaked in. Often hikers fall on these crossings and they get soaked in the cold water. Frost fell in a stream near Virginia Lake, and her gear was drenched. I thought Maine on the Appalachian Trail had a lot of water crossings, but it is nothing compared to the constant water hazards in the Sierras. Occasionally we sit by a beautiful alpine lake, and stare into its shimmering blue/green water and dare to jump in. This is an act that looks more delightful in a photograph than in reality. The water is mind freezing cold. Any leap into the water will be immediately followed by a sprint to the shoreline in search of the warmth of clothes and maybe a puffy jacket.

I Hope They Burn in Hell!

In the last few days the snow melt has made the rivers deep, and the rapids violent. With this melt comes the most vicious bug attacks I have ever endured. One must brave a mosquito fog each time we near water in the valleys. Frost looks like she has the measles, she has been attacked so badly. It is an obstacle that I underestimated before I began this trip. Bug defense, of some kind is an absolute necessity. I practically bathe in deet.

We have now finished the first half of the Sierras and enter into Yosemite Park in the coming days after a two day stop in the posh Mammoth Lakes. Here we will ressupply and restore our strength. This section has been tough, but by far the most amazing area of the world I have ever spent such a extended period in. The desolation, the frozen lakes, and the granite towers that surround us haunt and delight around every corner and over each pass. 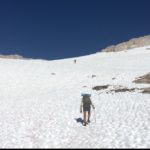