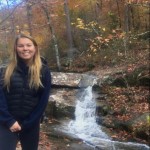 Hiking the PCT in Memory of My Tree-Hugging, Mountain-Loving Father

Every thru-hiker has their reasons. Everyone has their own motivations for committing themselves to what some would consider a rather grueling endeavor– walking through the woods, carrying your life on your back for 2,650 miles. To some, it’s a physical challenge. For others, an opportunity to escape the rigors of life in the 21st century. To me, it’s a little of both but also something a little different. My reasons are steeped in grief, loss, and a deep connection to the Eastern Sierra. It’s a story of a girl and her father and their mutual love of the mountains. And here it is…

Before falling in love with the mountains, I fell in love with fairies. When I was nine years old, my father told me that fairies lived along the shaded slopes of the Eastern Sierra. He told me they built their homes along the shores of the babbling creeks that weave in and out of the tall pine trees. He told me they were friends with the trout, often catching rides on their scaled backs to visit their fairy friends down the river. He told me endless tales of their mystical adventures and enchanted mischief. He told me a new tale each night as we fell asleep nestled side-by-side in our cozy two-person tent. In between his words, I could hear Lone Pine Creek flowing across its rocky banks and the great pines sighing under the weight of the evening air.

Year after year, my father and I would return to the Eastern Sierra for weekends of adventure and exploration. We would go on grand adventures, playing in the creek, catching fish on homemade rods, stargaze, all in the shadow of the majestic Mount Whitney with its dramatic granite peaks keeping watch on us. As I grew older, Whitney’s presence became more pronounced.

In 2009, my father and I set out to summit the granite giant that stood tall above our adventures in the Eastern Sierra—Mount Whitney. Together, we walked and laughed and climbed higher and higher than we had gone before. Somewhere around 12,000 feet, the altitude hit me. Hard. Nausea, dizziness, a relentlessly pounding headache overtook my being. Despite my love for these mountains, my body was having none of it. With only half a mile left between us and the summit, my pain became unbearable and we turned back. My father suggested we promise each other that someday we would be back to conquer the mountain.

In the spring of 2013, my father was diagnosed with stage four gastric cancer.

I immediately did precisely what they tell you not to: googled the survival rate. Three percent for a year after diagnosis. My time with my father was fleeting. I immediately applied for all the necessary permits with the hope that he and I would summit the mountain we had previously attempted. I kept an optimistic front; all the while in the back of my mind, I knew that I would be summiting alone. Come July, after three months of chemotherapy and a failed surgery, my father was in no state to trek up a mountain. But we had a promise and I was intent on fulfilling my half of it.

On July 29, 2013, surrounded by some of my best friends, I called my father from the summit of Mount Whitney. With tears in my eyes and deep melancholy in my heart, I said: “We did it.” Beaming with pride and punctuated by a clear attempt at holding back tears, he responded: “You did it.” After I got home, we continued our ritual of planning the next adventure. Maybe we would go to Costa Rica or run a marathon together. Maybe one day we’d hike the Pacific Crest Trail! But we never got the chance for those adventures together; four months after I summited Mount Whitney, I watched as my father took his last breath.

In the years since my father’s death, my grief has pulled me on all sorts of adventures.

I went backpacking in Nepal, ran a marathon in Chicago, attended college on the other side of the country, spent a week canoe camping in Upstate New York, drove across New Zealand by myself. After every escapade, friends would tell me: “Your dad would be so proud of you.” I’m sure they mean well, but every time it plants this question in my mind—would he actually be proud of me?—and reminds me that I will never know.

It may sound harsh, perhaps bitter, but I don’t want to live my life with the sole purpose of making my dead father proud. That sentence is hard to type, because, for the first few years after his unanticipated death, I was centering my decision-making process around what I thought my dad would want me to do. Sure, I want my father to be proud of the decisions I am making, but I don’t think that his supposed approval should be the core director of my life. My father was a determined, selfless, laid-back man. He was an intelligent and humble man who lived compassionately. As a father, he was a cheerleader, a protector, and a friend. He wouldn’t want me to strive to make him proud; he would want me to pursue my happiness.

So, with all that being said, why exactly am I hiking the Pacific Crest Trail?