Hitting My Stride in Washington

Four months ago, I stood under the blazing sun at the border of the US and Mexico, staring north. The thought of walking from Mexico to Canada was daunting and exhilarating all at the same time. Eventually, I took the leap and started walking. In the beginning, the miles slogged by and the state of California seemed to be endless. The long days and big miles in Oregon flew by despite three zero days and two neros (short hiking days). Before I knew it, I was descending into the Columbia River Gorge with my first views of Washington.

From the time I left Santiam Pass in Oregon, I began to slow my pace. The smoke had finally cleared and all the mountains were peeking out of the Central Cascades. Gone are the days of waking up before the sun and hiking into the night, and with sitting in alpine meadows, staring at incredible mountains while stuffing my face with gummy worms. Twenty-five to 30 miles per day with lazy mornings full of hot drinks and relaxed evenings in camp were quickly becoming the norm.

After parting ways with my trail family in Ashland, OR, to pursue different itineraries and mileage goals, I was giddy to be reunited with these crazy dudes. Although all five of us started our journey within 24 hours of each other, we managed to hike together, go our separate ways, and continually be brought back together again. My last night in Oregon was spent at the local brewery, kicking back beers next to the Columbia River, and catching up with fellow hikers about our recent adventures and sharing our excitement for the final state on the trail.

On the PCT, there are quite a few useless skills that are perfected along the way, one of those is being an expert at loitering. The last morning in Oregon was spent on the bench outside of the post office. I was organizing my resupply in the middle of the sidewalk while another guy named Moana was napping on his sleeping pad. The other two, Bogey and YB (Young Beard), were just sitting on the bench, watching the world go by. The fifth member of our posse, Rawhide, decided to hike out the day before after three zeros in town. 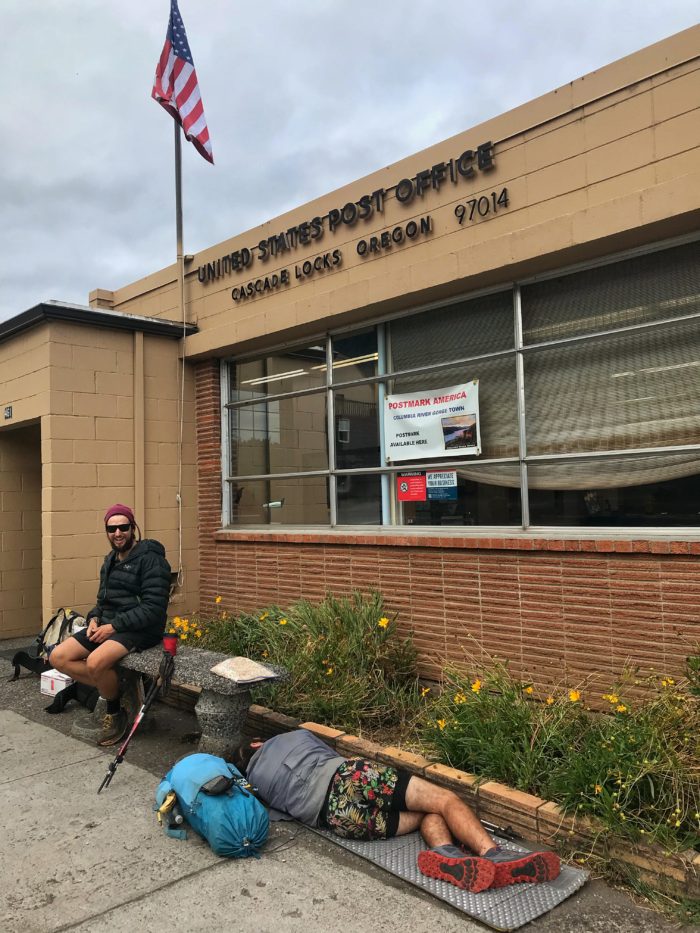 Once all of us finished our town chores, we treated ourselves to some ice cream before a long climb into Washington. Now this wasn’t just any sort of frozen treat; this was a thru-hiker’s eating challenge. The local drive-in serves soft-serve ice cream cones that are nearly a foot tall and I was determined to eat the entire thing. When the woman handed me the giant cone, I was worried it would topple over at any second. I posed for photos quickly and was soon digging in. Not even two bites in, however, the entire ice cream fell to the ground with the cone still in my hand. Luckily I was able to get a new cone, after licking part of the original ice cream from the sidewalk. Talk about hiker trash!

The second cone lasted long enough for me to get to the bench before all of the ice cream fell again, this time in my lap. Like any good hiker, I picked up the ice cream and put it directly in a cup before chowing down. Despite my massive hiker appetite, the ice cream bested me. We wandered back to our spot at the post office to find Moana right where we left him. After digesting for a bit, it was finally time to walk into Washington.

Since the beginning of this adventure, I couldn’t get the image out of my head of drinking a tall boy of Rainier beer as I crossed the Bridge of the Gods. This dream became a reality and I even convinced Moana, Bogey, and YB to get in on the fun. We cracked open our cans and sauntered into Washington. The feeling of walking into the state I call home overwhelmed me with joy. Oregon has brought me so much happiness, but Washington was the state that became my home when I needed it most.

The four of us made it to the trailhead, dropped our packs, and finished our beers. The Columbia River Gorge is the lowest point on the Pacific Crest Trail at about 100 feet above sea level. Once you cross the Bridge of the Gods, the climb begins, and doesn’t seem to end. With six days of food and an excess of snacks and candy, I found myself grumpy these first few days in Washington. Finally, after eating my food down and becoming known as the treat lady among my trail family, I was able to once again embrace the beauty of Washington. 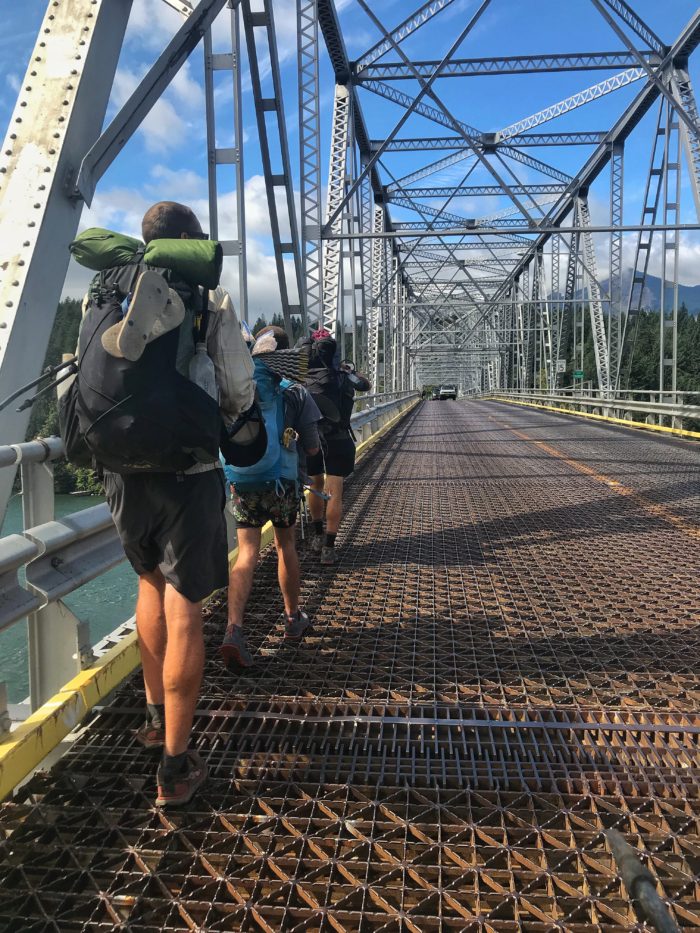 The elevation profile of this incredible state looks a bit like a roller coaster ride. More rugged terrain and steeper climbs are found each day, yet I feel the strength I have gained from hiking 2,400 miles. Not only is the terrain growing more wild, but the animals that inhabit the area are too. Rawhide, YB, and I were hiking along a breathtaking ridge through clouds when we heard the calls of many marmots in the area. Our attention was brought up the hillside when we spotted a mountain lion sauntering along the ridge in search of a stray marmot. We stopped in our tracks and stared up at this incredible beast from 200 yards away. This has been by far the coolest nature sighting I have had on trail!

Even the mice in Washington are wild and fearless. The other night, I woke up to a mouse crawling across my face. I scrambled for my headlamp to get this tiny beast out of my tent. Once I scared it off, I found it chewed a hole in the nylon of my tent and was feasting on my last candy bar. Thinking this tiny bear was gone for good, I tried to fall back to sleep, but this little guy was hungry for more. Every few minutes I would hear it scurrying around my tent, trying to get back in. After several hours of restless sleep, I finally was out for the rest of the night. As I woke up the next morning, quite disheveled, I realized that my headlamp was still on my head and the lid of my pot was in my hand, ready to strike.

Washington has also been wild in other ways. On trail I have begun to realize that almonds do not sit well in my stomach. Since this is new knowledge to me, I’m not very good at reading labels. I was hiking along a burn zone and didn’t feel like stopping, so I found a bar in my pocket and ate it. Big mistake! Ten minutes later, I was dragging along with a gargling stomach trying to figure out how I went from feeling great to feeling like death. Three catholes later within the hour, each being dug with a serious chokehold on a mud turtle (if you know what I mean!), I realized that the bar I ate had almonds in it. I rolled into lunch feeling like I was being steamrolled. Somehow, I rallied in the afternoon and crushed a 30-mile day! I will never eat an almond again.

Despite the almond incident, hiker hunger has been at a new high. With colder temperatures and grueling climbs, food goes straight through me. We have been blessed with a huge amount of trail magic in Washington, and each time I amaze myself with the amount of hot dogs I can eat in one sitting. The best magic we received this week was from a man in a vintage Volkswagen bus on a cold and rainy day. He had a huge tent set up and provided hot chocolate and fresh fruit. The best part was the woodburning stove. I would have stayed there all day, but this trail isn’t going to walk itself.

Food was a great motivation to arrive at Snoqualmie Pass in a timely manner as well, along with a visit from several rowing friends from college. All of us were so hungry when we arrived into town that morning that we made a beeline to the Pancake House and continued to shovel food into our mouths. Luckily rowers know the struggle of constant hunger, so our barbarian behavior wasn’t anything new. But, when Bogey and Moana rolled into the restaurant in their laundry clothes, my frontcountry friends were in for a treat. Laundry clothes are generally the clothes that don’t smell too bad and are often a weird combination of the minimum amount of coverage to be socially acceptable.

Despite witnessing hiker trash firsthand, my visitors stuck around for a while afterward. It was great catching up with familiar people who don’t hike every day. Being with these people brought me back to our days in college when rowing was life. I miss the days of pushing my physical limits and pledging to the grind for the good of the team. Coming into Snoqualmie Pass, I was conflicted about whether to push my limits or cruise to the finish of the PCT. After being with teammates from college, I have been motivated to finish this incredible trail with a bang. I am committing fully to the grind and leaving whatever I have in me on this trail.

When I reflect on the beginning of the trail, I was stopping nearly every hour to have a break. Now, I can go four hours without stopping. Granted, a big reason for that now is because of the Washington rain. At this point in the game, you have to keep hiking just to stay warm.

The rhythm of the PCT seems easy and natural now. Wake with the sun, eat, hike, eat, hike, eat, set up camp, and sleep. Life is simple and beautiful. Washington continues to amaze me with its beauty and sense of the wild.

It’s incredible to think that there’s less than 250 miles between me and Canada. I’m excited to see what the real world has to offer post-trail, but I’m sad to think of the end. The thought of parting ways with these incredible people and returning to a more complicated life is daunting. I have learned so much about myself through life on this trail and I have found strength in myself that I never thought was possible. The Pacific Crest Trail has broken me down and built me into the best version of myself. I look forward to these last days on trail and believe they will be some of the best. Until then, it’s just one foot in front of the other in the pouring rain.