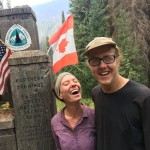 I am not a Mountaineer

Let’s go to Oregon, shall we? 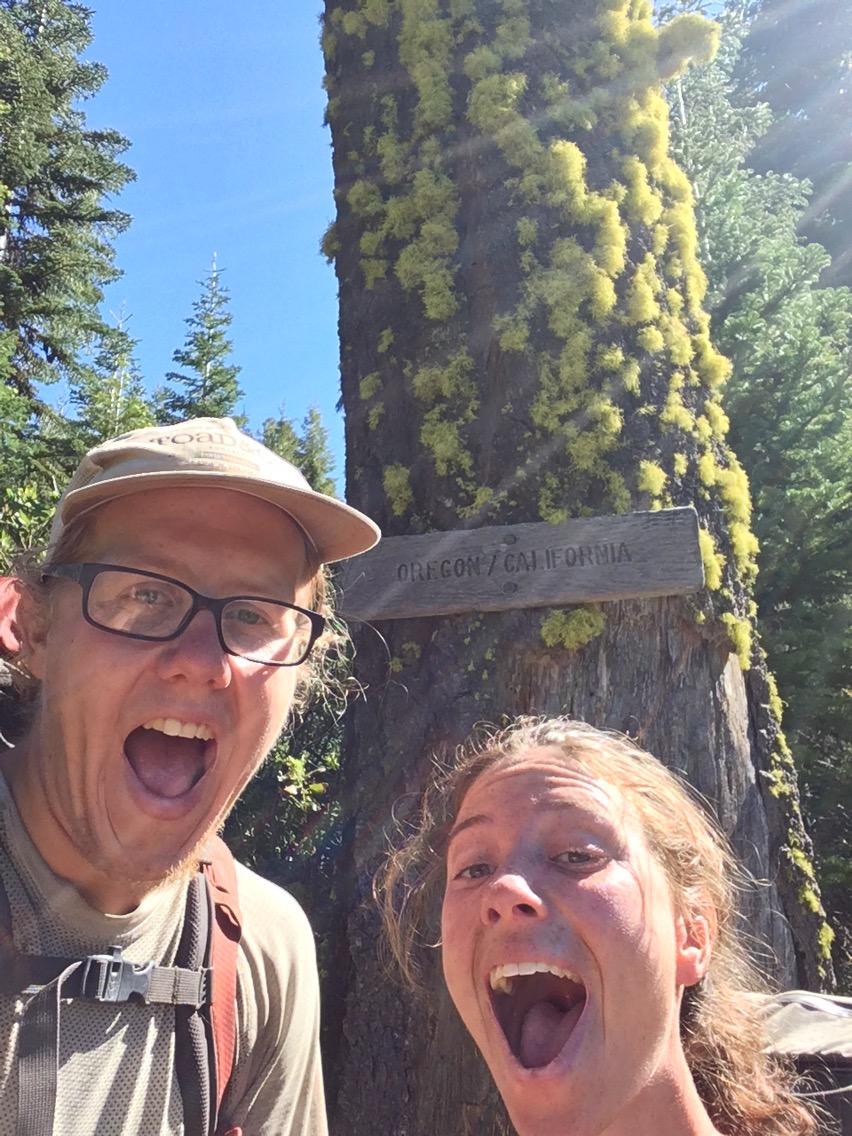 At the Oregon California border as we headed south. It’s fun crossing a state border for once!

If you’ve heard anything about trail conditions this year, then you would be aware of the record setting amount of snow that’s currently (still!) blanketing the Sierras. After three days of trying to push through it all, we became increasingly aware of how difficult the task at hand would actually be and decided to reevaluate. When we made the decision to come to Ashland, it was rooted in the idea that there was less snow up north.

But man, was that wrong. 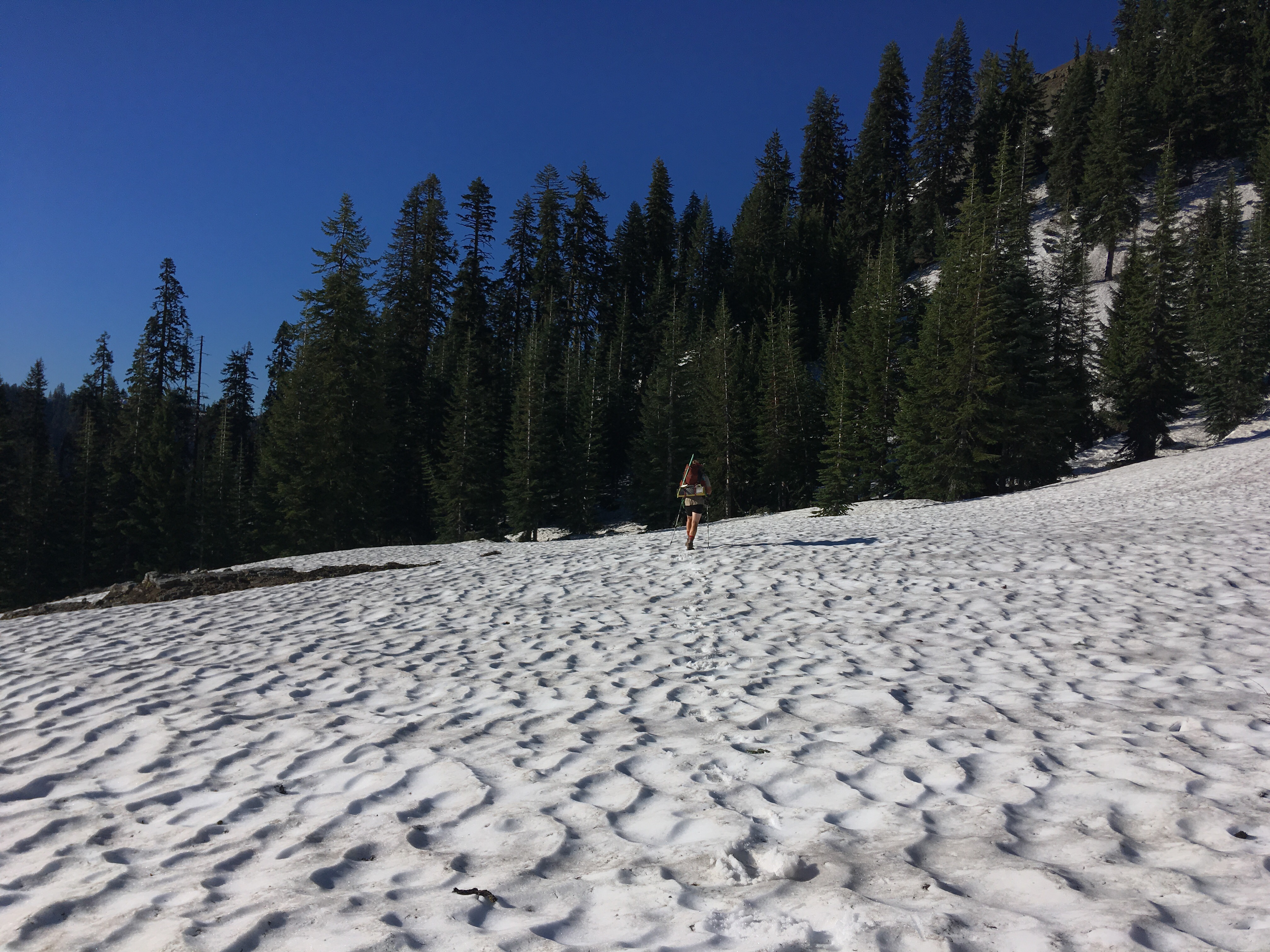 Bighorn walking across a field of snow, one of many that slowed us down throughout the last five days

Bighorn and I just made it to Etna, 119 miles south of Ashland. Somehow we managed to do it in the five and a half days we allotted ourselves, despite a fourteen hour day in which we hiked a total of 15 miles. The experience left us both completely drained of energy and broken down, and for the first time on trail I questioned whether being out here was the right decision for me.

The thing is, what we did for the last five days is not backpacking. At times, we were straight up mountaineering. Not having grown up in snow, this was not a skill I was looking to learn on the fly. 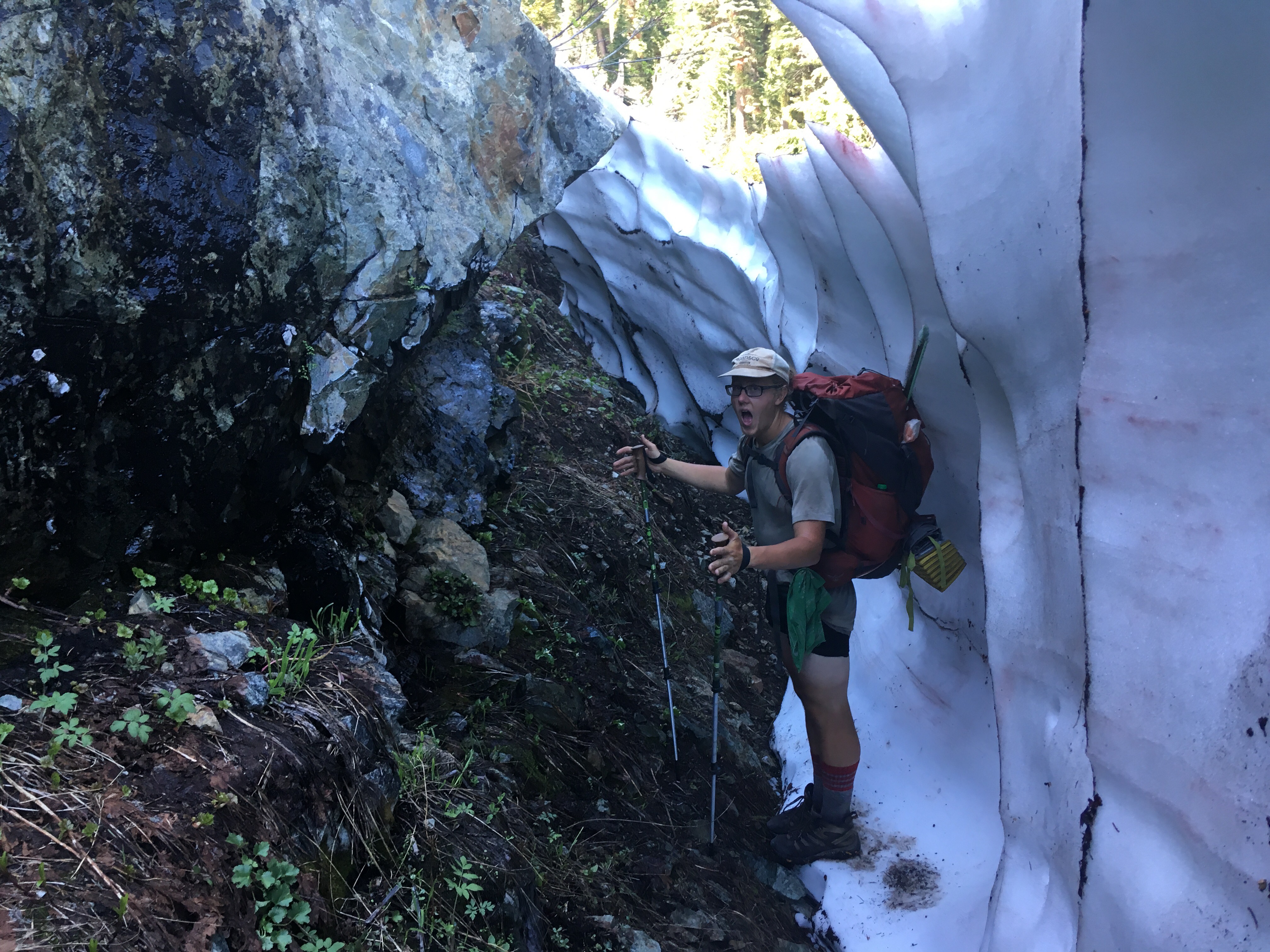 At one point, we had to walk between a wall of snow and rocks. A dramatic change from the desert scenery we grew so use to

On day two of this section, we found ourselves in our first questionable spot. We followed the footprints as best we could and then Bighorn made the decision to go high, climbing to the top of the ridge. Knowing my comfort level, he suggested I stay low and come up later when the hill was less steep. I continued to maneuver my way through the snow, being careful with each step to build a solid platform before moving forward. When it came time to hike up to the ridge, I was frozen still. Below me was a steep hill cascading into vast nothingness, a fall that would surely break some bones if nothing else. To get up higher, I’d have to bring my foot up high above my chest, create a foundation for my foot, and leverage my entire body pack and all onto the snow above me. If I was able to do that, I would have to quickly move to my second step as the only place I could put my first foot was a layer of thin snow, likely to crumble underneath me the minute it had all of my weight. I was convinced I found my final resting place.

We managed to work together to get me up and over the ridge, back to the safety of true flat ground. But instances like this were not so few and far between. Over the next couple of days, we would find ourselves in many more questionable situations.

On our last full day in this section, we approached mile 1613. We had heard a lot from northbounders about the snow around here and had been given the advice to take an alternate trail that would bypass most of the sketchy parts. When we arrived at the go around, you couldn’t see footprints along the PCT. This made it apparent to us that the group ahead of us had also taken the alternate, so we went searching for our new route. Bighorn blazed the trail, walking across a steep section of hill trying to find the other side of the trail. We were with three others at the time, and they decided they would rather go up and around the ridge of the mountain where they would only have to walk on rocks. I went with them, telling Bighorn I’d see him on the other side.

As we got to the top, the group of three let me know that Bighorn was making his way up to the ridge from down below. Where he was, the hill continued to grow steeper and he felt it would be safer to be on the ridge. When he got to the base of the mountain, he began to scramble up the rock only to find that the snow underneath had melted away from the wall he was now climbing, leaving a forty foot drop below him. He kept his eyes forward, moved methodically, and within a half hour he was up on the ridge catching up to the rest of us.

At this point, we had been hiking for well over ten hours and had only managed to go 11 miles. Frustration was brewing, and every new suggestion of what needed to be done was being met with a dull voice in my head saying, “are you f%*!-ing kidding me?”

At one point, we needed to make our way down the ridge about 300 feet to meet up with the trail again. Bighorn decided to take the snow while the rest of us took the rocks. He pulled his pack on, grabbed his ice axe, and began essentially skiing down a giant bowl of snow, moving into imaginary switchbacks as he smoothly glided down the hill. It was an amazing sight and one I would have filmed if I wasn’t so terrified of him falling to his death the entire time.

All that being said, the last few days have been valuable learning experiences for the both of us. As I said, my comfort in snow is not great. I never wanted to buy an ice axe, let alone use it to self arrest day three of this section when my foot slipped underneath me and my body began to hurdle down a steep hill of snow. But, as I grow more familiar with the terrain and the gear needed to navigate this section, my confidence in my own abilities has grown too. We’re learning how to move forward together, methodically and carefully, in order to accomplish this section just as successfully as the other 800 miles we’ve completed. It may be slow moving, but we’re managing to figure it out all the same and come out safe and sound on the other end.

We’ll be leaving Etna some time today and have about 100 miles more of probable snow before we enter a clear patch for 200 miles. We’ll update as soon as we can when we get to our next town, and until then happy trails!