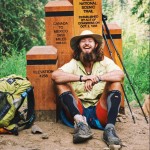 A Broken Ankle, the Worst News, and a Triumphant Return to the PCT

As a thru-hiker we must learn to find comfort in the uncomfortable, to redefine mental barriers, and to overcome primal pains. It’s in the job description. If you can learn to embrace all of that, there are only a handful of things that can truly end your thru-hike: finances, a family emergency, and my biggest fear coming into the PCT this year, injury.

What is a thru-hiker’s biggest fear? Wildlife? Being cold? Running out of water? A heavy pack? The list goes on and on and varies depending on what hiker you’re talking to.

As I prepared for my ever-nearing start date, I followed fellow hikers on social media, as we do these days. So many of them were forced off trail due to injuries: stress fractures, shin splints, plantar fasciitis, and a handful of others that plague the thru-hiking world. “What if this happened to me?” Injury rarely crossed my mind during my thru-hike of the Appalachian Trail in 2015, so why now?

I began this thru-hike in a different head space from the last. I was hypersensitive to any ache or pain felt and was worried that anyone of them could be a trail-ending injury. Injury is a special kind of fear because unlike others it can’t be remedied with a pack shakedown, another puffy jacket, extra water, or a whistle. Yes, braces and boots help prevent but injuries can still occur. This fear slowly faded into the back of my mind after Big Bear a few hundred miles in. We got our trail legs, found our groove, and started busting out miles. Canada, here I come!

Pop. The Beginning of the End 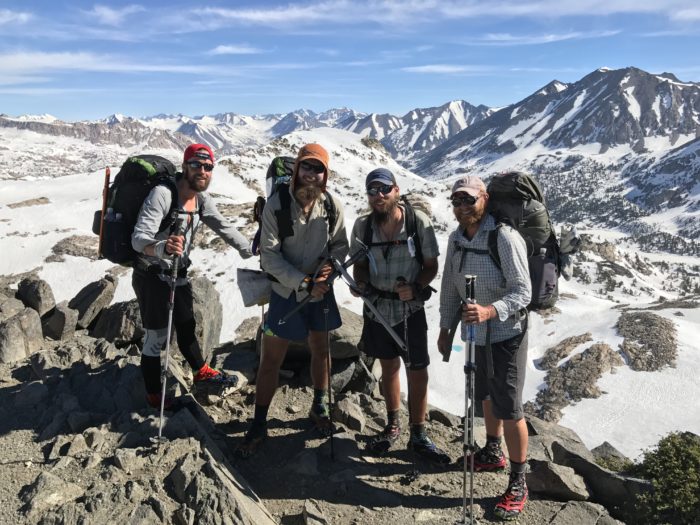 As a trail family, we decided not to skip the Sierra Nevadas and push straight north from Kennedy Meadows. One month and 300 miles of snow later, we made it to Sonora Pass. We took two zero days to celebrate before heading back to the trail. Eleven miles into a 75-mile resupply, my right heel caught a tree well (ice buildup around a tree) and I landed two feet down with a full pack onto the side of my right ankle.  Pop! The sound of my ankle was louder than snapping branches when gathering firewood.  I threw down my trekking poles and fell onto the ice, clutching my ankle. I knew it was bad. Within 30 seconds, my ankle swelled up to the size of a golf ball. The thing I feared had happened. I was now an injured hiker. It took another 300 miles and 20 more days of fighting pain to finally accept my fate. My thru-hike of the PCT was over. 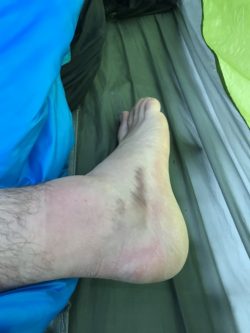 Now I’m sure you’re saying, “What? 300 miles?” If you’re drinking coffee you just spit it out in surprise. Yes, I hiked 300 miles on what I didn’t know at the time was a broken ankle. Maybe I just didn’t want to know… any who, aren’t all thru-hikers a little stubborn? I thought it was just a bad sprain that would heal with some zero days, an ankle brace, vitamin I, and lower miles. It didn’t. But hey, we live and we learn right?

The day I got to the halfway point on trail,  all signs pointed at me to get off. That morning, the intensity of pain caused me to throw up as the day started. Then the constant throbbing caused me to stop every two or three miles to sit down and rest. All I could do to coax myself along was constantly listen to podcasts and music to distract my mind from the pain. After tweaking my ankle one last time it hit me, “This isn’t what thru-hiking is about.” I was actually counting down the days till the end of the trail because that’s when the pain would stop. “This is my vacation. I pay to do this. Yes, it is hard to be a thru-hiker but hiking on a hurt ankle and being miserable isn’t why I am I out here. Well Jolly, time to go home.”

It’s such a hard call to get get off trail. I dedicated my hike to a little girl named Julie who has Rett syndrome and I felt like I was letting her down. With a broken heart, I made the decision to come home 80 days after starting the epic journey. I fooled myself into thinking I would make a return that year and finish.

After being home for two days, I went to the doctor with high hopes that I could receive therapy for my ankle and return to the trail in two weeks. The X-rays had other plans. The doctor explained that this was a very serious fracture and tear. Not only could I not return to the trail, but I might also need surgery and worst of all he told me, “You may never be able to hike again.”

Next stop: get an MRI to see truly how bad it was. I tried to hold it together but all I could think was, “I may never be able to hike again, something I love so much, and I didn’t even say goodbye. Well… maybe I can get into kayaking to help me stay active outside.” What would life look like without backpacking in my life?

The results came in the next day with good news. “No surgery. We will need to put you in a boot for six to eight weeks.” That’s it? I can handle that. That means I can hike! Maybe not this year but the lifetime restriction had been lifted. Wow.

After going back to the doctor, just six days after getting off trail, I felt so much joy that I was only in a boot. Isn’t that funny? I thought I would only be away from trail for two weeks, so if the doctor told me I would be in a boot for two months on the first day I saw him, I would have been destroyed; however, since I got the worst possible news the first day this boot sounded like the sweetest noise to my ears, second to s’mores Pop-Tarts with Marshmallow Fluff and Nutella between them. It’s funny how the trail provides even when we are away. 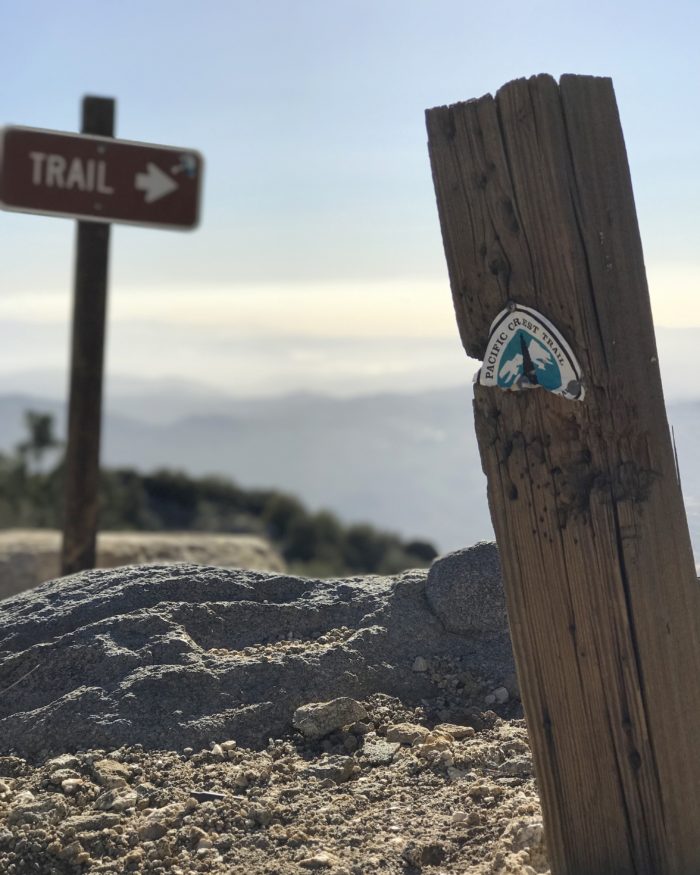 When my sentence to the boot was served and my time of physical therapy was met, I was a free hiker trash backpacker again. It was no longer a question of if I would finish the PCT anymore but when.

I’m beyond stoked and so thankful to get back on trail in April. Just like the Gatorade commercial says (not a sponsor but wouldn’t say no), “failure is the best motivator.” My gear list is made. My ankle braces have been bought. My base weight has been made lighter and my stoke level at an all-time high. PCT 2018 here I come.