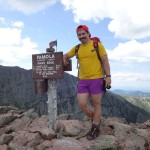 I Got 99 Problems, But a Hiking Partner Ain’t One

Over the last couple years I’ve seen hundreds of people post on different thru hiking forums looking for a hiking partner. Often it’s because their partner bailed on them last minute, or they are just legitimately concerned that they can’t complete a thru hike by themselves. I want to take these people by the shoulders and shake them while I yell in their face. Not because I think they shouldn’t hike with anybody, but because they are already doubting themselves! Now if I said that I was always 100% confident that I could hike the Appalachian Trail solo, then I’d be lying. My mother can vouch for that considering she was usually on the receiving end of my depressed lonely texts. But like any good mother would, she gave me zero sympathy and told me to figure it out.

My mom was right to give me no sympathy, I brought my loneliness upon myself. Not only did I choose to go Southbound on the AT, but I also absolutely refused to slow down for anybody. I’m not saying I was the fastest Southbounder on the AT that year (I kept up with Anish only long enough to catch a whiff of what crushing miles really smells like) but there still were not many hikers that would string together consecutive 30 mile days. It took me awhile to realize that I wanted to hike solo. I spent about 7 days hiking with a guy named Snow in Maine and New Hampshire. On the 8th morning, I broke camp first and let him know where I planned to camp that night, he didn’t make it to that shelter and I never looked back. Sure, this may make me sound like a dick, but that’s when I first realized that the only commitment I had on the trail was to make sure that I made it to Georgia.

No, I don’t have commitment issues like some classic male character in a romantic comedy. I just don’t commit to anybody while I’m thru hiking. Every time I started hiking with somebody else, it became quite obvious that the partnership wasn’t going to last because of my lack of commitment. There are a slew of reasons why I would “breakup” with another hiker or a group, some more reasonable than others. In Vermont I met a group of hikers that were really excited about starting to do bigger miles. The first day I hiked with them we had a 21 mile day planned. They stopped 8 miles in to set up camp at a lake and swim all day…I hiked 21 miles and never saw one of them again. This was the most frequent reason for leaving a fellow hiker behind, I was just never willing to cut my days short. Like I said before, all I cared about was getting my butt to Georgia and I didn’t change my game plan for anybody. In case you were wondering, this can be a terribly lonely way to hike 2,200 miles.

All By Myself, Don’t Wanna be…

Now here’s the real shocker, I don’t want to hike solo all the time! As a SOBO with commitment issues, seeing other thru hikers was few and far between. I took every chance I could get to hike with somebody for at least a day or two. Most of the time I knew it wouldn’t last, but it was nice to chat and have some company occasionally. The loneliest days were always when I out-hiked my company, but I could never bring myself to put on the brakes. Those were the days I’d text my mom complaining about my loneliness, to which I received well deserved tough love. I don’t feel like I’m asking for much in a hiking partner though, I just need somebody who is willing to hike my exact mileage, spend as much time in town as I want, carries all my gear, and massages my feet every evening at camp.

I know I’m never going to find the perfect hiking partner, and I know I’m never going to fully commit to somebody who drastically changes my pace. But there are some awesome perks of hiking solo and I strongly encourage people to at least try it out sometime. As a solo hiker, you have total control over every decision that needs to be made. You decide how far, how fast, how many breaks, where to camp, when to go to town, how long to be in town, and how many pee breaks you take without having to be embarrassed by your hamster sized bladder. Ideally, you can hike “around” a few people that you enjoy seeing every few days or every other week depending on your paces. Leap frogging with a few other hikers is a good way to make all your own decisions, but also see some familiar faces every now and then. I’d also love to give hiking with a partner a shot on the PCT if I find the right person with similar goals in mind. But for now, I’m still living the solo life. Sure going solo has it’s setbacks, but in my opinion they are all worth it.

Overall, I just want people tell people that this is your hike! You should enjoy it however you want whether that be solo, with a group of 15, or anywhere in between. (Don’t hike in huge groups unless you hate nature) Whatever you do, don’t let somebody else compromise the success, or most importantly the enjoyment of your hike.

After the PCT I plan to thru hike the Vermont Long Trail with my wonderful girlfriend. Sarah, if you’re reading this, I plan to commit totally to whatever mileage you want…you can just ignore everything that was said above this.

Hey, I'm Mismatch, I enjoy long scenic hikes through the woods and a chilled bottle of Mike's Hard Lemonade. AT '15 ME-GA, and setting off for a PCT thru hike attempt in May. I'm currently a personal trainer based out of the cornfields in central Illinois. I have my sights set on hiking the Triple Crown and I'm excited to share all the ups and downs of this journey with you all.