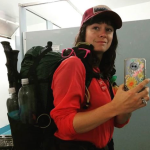 Trail Advice For A Newbie On The JMT

I have a confession – I have been going on pathetically few hikes this summer! Combine too much work, sweltering Utah heat that I’m just not accustomed to (people hike in this?), traveling for weddings, etc – and bam! Hardly any hiking!

However, I have been able to get a little mountain fix by giving some trail advice to a friend who is just departing on the John Muir Trail (JMT). My hiking pal, Andrea, is new to long distance hiking. She and I hiked the Long Trail last summer, but otherwise she’s new to the scene. As we know, there are a lot of details to figure out and there’s a lot that goes into planning for a JMT hike.

Andrea hit the trail yesterday, but not before asking me lots of questions. Luckily, I also had lots of answers! 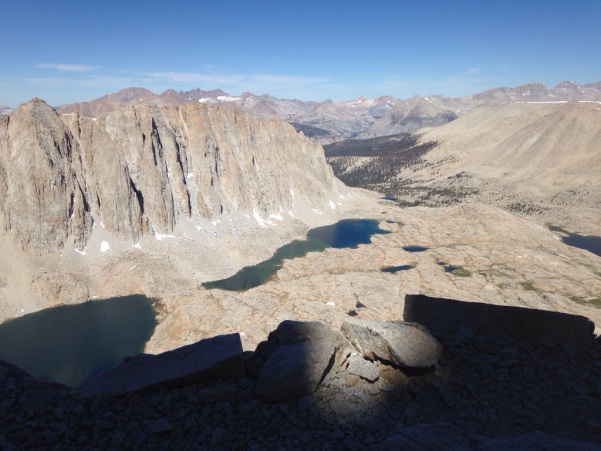 I wanted to share some of this Q&A with the Appalachian Trials community in the hopes that it helps a few readers get pumped and prepared their own hike of the JMT – or other trail! This information is just a little primer to get you started, and hopefully answers some of those midst-of-preparation questions as well.

(Note, some of this info may be a bit controversial, this is not “advice”, and I accept no responsibility if you adhere to this info 🙂 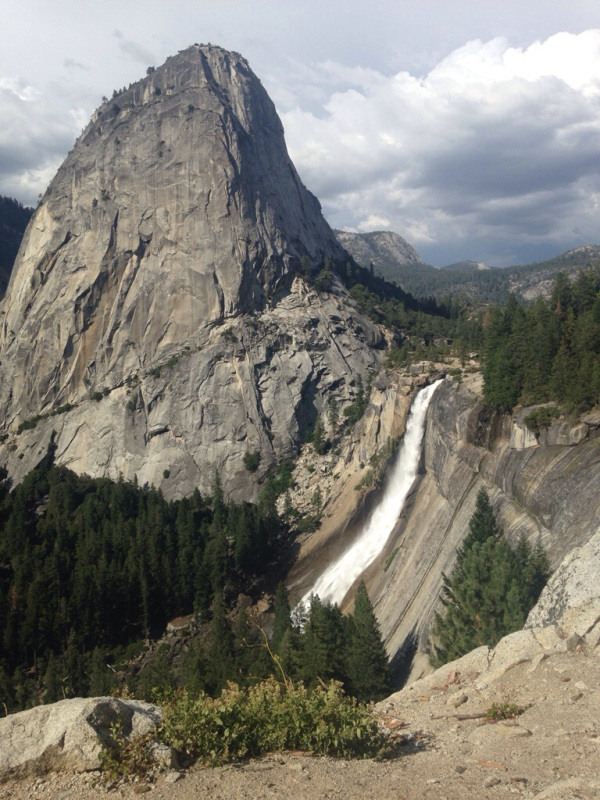 Start in the Yosemite Valley

Why do they call it the John Muir Trail?: Because John Muir was a badass! And the Sierras were his stomping grounds. He was a 19th century naturalist, conservationist, and founder of the Sierra Club.

Overlap with PCT (Pacific Crest Trail): About 170 miles (most of the trail), with the exception of the Yosemite Valley, the spur to Mount Whitney, and a chunk in the middle which parallels the PCT (and is often considered more beautiful btw). 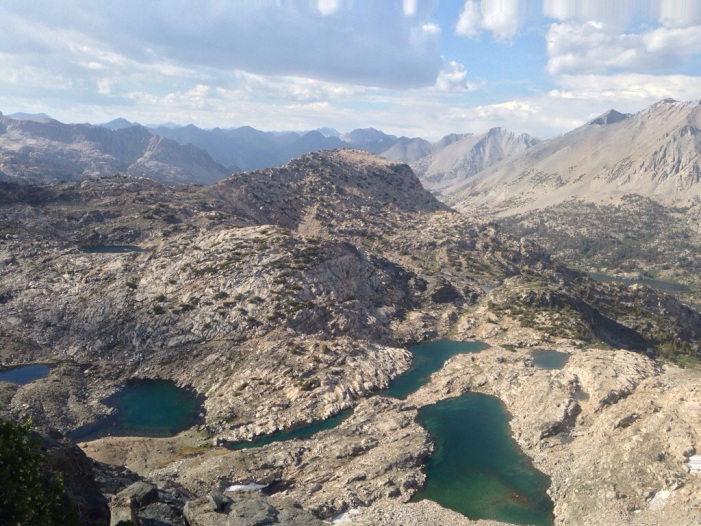 Rae Lakes on the JMT/PCT

Q: Which direction should I hike the trail?

A: Either direction is great, but it might be a bit easier hiking southbound as the elevation is generally lower – and the passes lower – to the north whereas the elevation – and passes – are higher in the south. If you’re up for a challenge, go south to north – you’ll start with Mount Whitney (14,505 feet), which is the highest mountain in the lower 48, so if you do northbound take your time and/or spend time at elevation (>10,000 feet) to get acclimated. 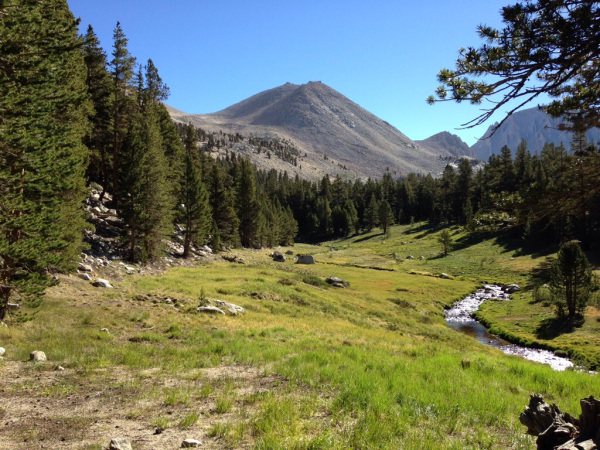 Crabtree Meadows is at the base of Mount Whitney, on the southern end of the JMT

Q: Do I need to buy the Tom Harrison JMT maps?

A: Not necessarily. I did when I hiked the PCT/JMT and I liked the level of detail they provided. You can always borrow those maps from a friend if you’re lucky! Either way, you’ll want some form of map/navigation, be that the Tom Harrison maps (buy online), Halfmile’s PCT maps (print for free and include the spurs off the PCT that cover the JMT), Guthook’s app, or another form of map.

Q: Do I really need a permit?

A: Yep. I mean, sure, there’s the off chance you could “sneak” past the rangers that may check your permit, but 1) it helps keep the trail from being totally overrun with hikers, and 2) it’s not so hard to get as long as you plan ahead. You can get the JMT permit if you’re hiking the JMT only. Or if you plan to hike a larger section of the PCT that overlaps with the JMT, you can get a PCT permit which are valid if you’re hiking 500+ miles. (The PCTA website is an amazing resource!) 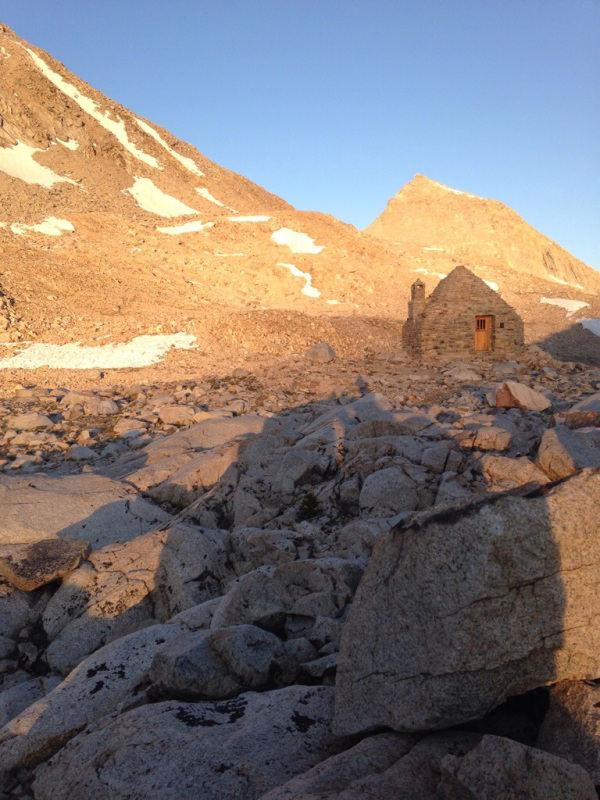 Q: Do I really need a bear canister?

A: Yep. They’re required on large chunks of the trail – if not all of it – so it’s worth carrying the entire way. Rangers don’t look at them, but they will ask you, and you’ll want to knock on it through your pack for reassurance. See the PCTA website for all details – very helpful! Truth: not all of my food fit into my bear can (as will happen) and I also used a backup Ursack for the remainder of my food. Disclaimer: the Ursack is not approved bear containment in Yosemite, and if a Ranger knows you have one they may escort you out of the park. I carried one, along with an Opsak odor proof food bag, for any other smelly items (e.g., toothpaste) that would not fit in can – which was better in my opinion than just storing those inevitable spillover items in a stuff sack.

Q: So what do I do with the bear canister?

A: Screw it shut and set outside on the ground – I believe the recommended distance is 100 yards downwind from your tent. Confession: I didn’t always put my bear can that far away from my tent. 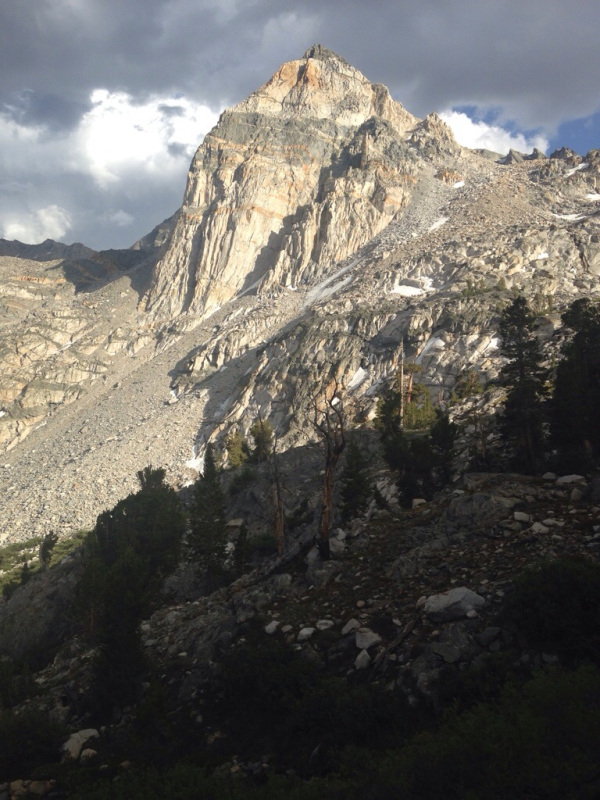 A: Haha, that wont happen. Well, actually there are rumors that intelligent bears in Yosemite used to drop the canisters off cliffs then hike down to the base to retrieve the food! If that happens, tell another hiker that a bear stole your food and ask if they have extra! But seriously, that probably wont happen.

Q: And what do I do with an Ursack?

A: Tie it to a tree! The website says to use a “double overhand knot”, which is the same as a surgeons knot. Tie it down, then use the same knot to tie to a tree. They’re really easy knots, but the key is – you need opposable thumbs to untie! Hence, bears can’t get in.

Q: There’s a big gap in the opening of the Ursack even after I tie it closed. What to do?

A: As long as you use an odorproof food bag inside, it will be fine. Too small for a bear to get in! However, the opening is large enough for a mouse to get in. In fact, a mouse got into mine once (in Washington, not the CA Sierras), nibbled on a gross whole wheat tortilla which was in a separate bag – and it ignored everything in the odorproof bag. The odorproof bags really work. 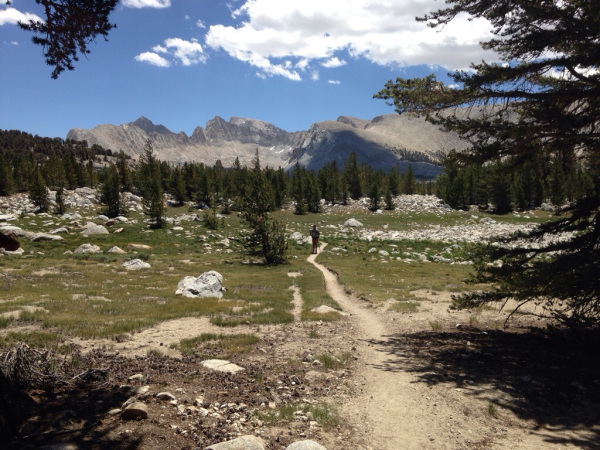 Q: Should I fly into Sacramento or Reno?

A: Reno. We flew out of Reno and that was easy. And flights are cheap. Busses take you from Reno to South Lake Tahoe, and all the other trail towns you will want to reach to access the JMT. Honestly, I don’t know much about flying out of Sacramento…

Q: How will I get from the airport to the trail?

A: Many options: 1) busses, 2) rent a car, 3) hitch a ride, 4) a combination of those options. Also, there may be Trail Angels nearby or someone who happens to be going that way – try posting on the PCT Facebook group, too. 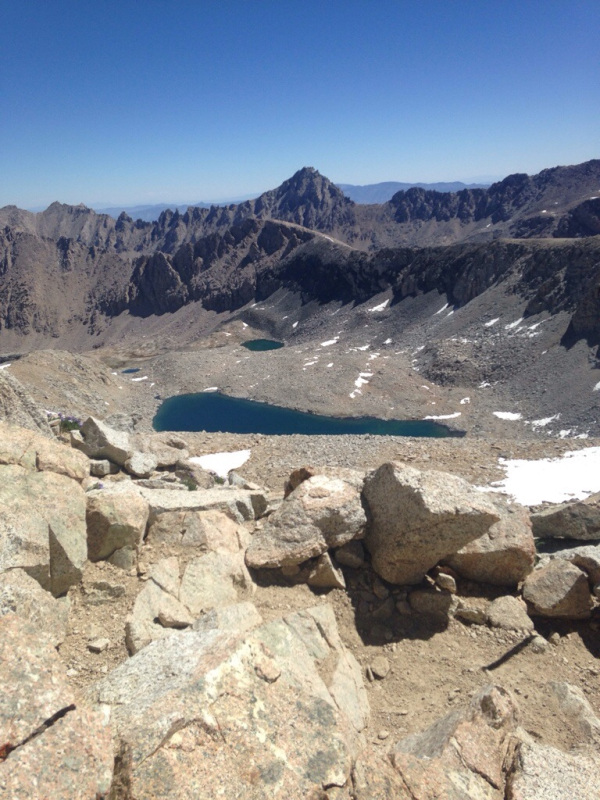 Q: I hate planning food! What should I do?

A: Either mail yourself food entirely, or buy yourself food in towns in addition to mailing yourself food. NOTE!: You have to send yourself food to several locations* weeks in advance so prepare early. A strategy I go with breaks my miles down to days… Then I eat one of a few options for breakfast (oatmeal, grits, bars) and dinner (noodles, couscous, Mac&cheese, potatoes + veg + protein). And tons of various snacks for lunch. Don’t forget coffee, electrolyte powder, hot chocolate, cheese, jerky, and maple syrup!

Q: Why am I so nervous about bears??!

A: You don’t have to worry about bears! First, no grizzly’s in the area. Second, be careful with your food and they will be more afraid of you than you are of them!

A few things to remember and a few tips: if you leave your food out for bears they will become habituated to human food and seek it out. Unfortunately, this has happened a lot in Yosemite – hence people-food hungry bears and as a result those aggressive bears have been killed – very sad but safer as a hiker. Result: bear cans and being safe with food! Extra precaution: cook and eat before you get to camp so that you and your camp don’t smell like delicious food.

To assuage your fears: 1) I saw no bears when I hiked on the PCT. The only one I heard of (it was lurking around camp) was actually in the desert. 2) Animals are generally confused by the shape of a tent – they don’t equate it with a person, so a bear will not be sneaking into your tent at night (unless you sleep with a buffet of open food – see above)

Can’t get enough of that muir hut

Q: Do you think I should stay in South Lake Tahoe (SLT) or head to Mammoth Lake before I get on the trail?

A: If you have a few days, you may want to head straight to Mammoth – it’s more walkable than SLT and is closer to the trail.

Q: I didn’t sent my food to the ranches in time – Vermillion Valley Resort (VVR) and Muir Trail Ranch (MTR)! What do I do?!

A: It doesn’t mean the end of your hike! A few options: 1) Send your food to Independence CA and hike the 7.8 mile spur Onion Valley Trail – followed by a 13 mile hitch – to town. When I hiked the PCT in 2014, my Sierra stops included Kennedy Meadows (not on the JMT – it’s further south), Independence, and Mammoth – which is to say, if you only have a few stops, you will be fine. You will have to carry a little more food, but it’s no big deal and definitely feasible! 2) Stop by VVR and MTR and hope they will let you pilfer their hiker boxes for food? (Note: they will probably not let you into the hiker box if you did not send anything there and/or are not staying there, so I cannot recommend this option).

Also, check out the As the Crow Flies PCT Town Guide – this is a great website and will help you plan last minute changes and will give you an idea about what you’ll find in town! 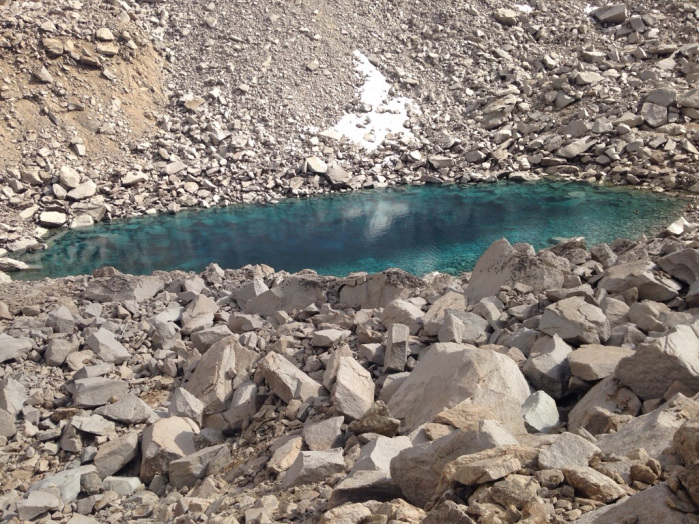 Lake at the base of Glen Pass. Can you spot the tiny swimmer for scale?

Q: Did you have a fire permit? I don’t have one!

A: Yes. But it’s not a deal breaker if you don’t have one. However, you can go online, watch a short video, take the test, then take a screenshot if you have no printing options and you’ll probably be fine. The key info is no open fires and no stoves without an off switch (aka, no alcohol stoves).

Q: Any other helpful apps I should have?

A: Guthook, PCTHYOH (for iPhone, although this might no longer be available?), and HikerBot-PCT (if you have an Android).

Q: Did you have cell reception on-trail?

A: No – I think the Sierras were a total dead zone as they are so remote. I did have reception in all trail towns though.

Hope you enjoyed the Q&A on the JMT! For helpful links, see the links above embedded in text.

2014 PCT LASHer, 2015 Long Trail Thru-Hiker, 2018 AZT Thru-Hiker, 2019 AT LASHer. I grew up in the NH White Mountains. I'm the proud owner of a 1991 Toyota Hiace retired Japanese Ambulance named Yakushi with whom I adventure. Read about my adventures at jeanhikes.com.