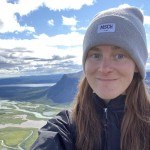 Julian to Big Bear lake: Through the Anza Borrego desert and into the San Jacinto mountains

I don’t know whether to cry or vomit. I still have 2 miles (3 km) to climb of a peak with a total grade of 20%. It’s the end of a whole day of walking and climbing. I’m exhausted. I have been hot all day but now I’m starting to get cold quickly. The path is not the smooth dirt ribbon I have become used to but it’s muddy and slippery. There’s a lot of debris. Sometimes it’s barely a path. I know that the camp spot that’s waiting for me at the top of Apache peak is very exposed. It’s basically a wind tunnel that is gonna make me even colder and the flapping of my tent will keep me awake all night. I’m ready to camp right there and then. The only thing that keeps me going is Midnight, a member of my trail family, who is struggling right ahead of me. And the thought that if I make it these last miles, tomorrow I will have a shorter day to hike into Idyllwild. 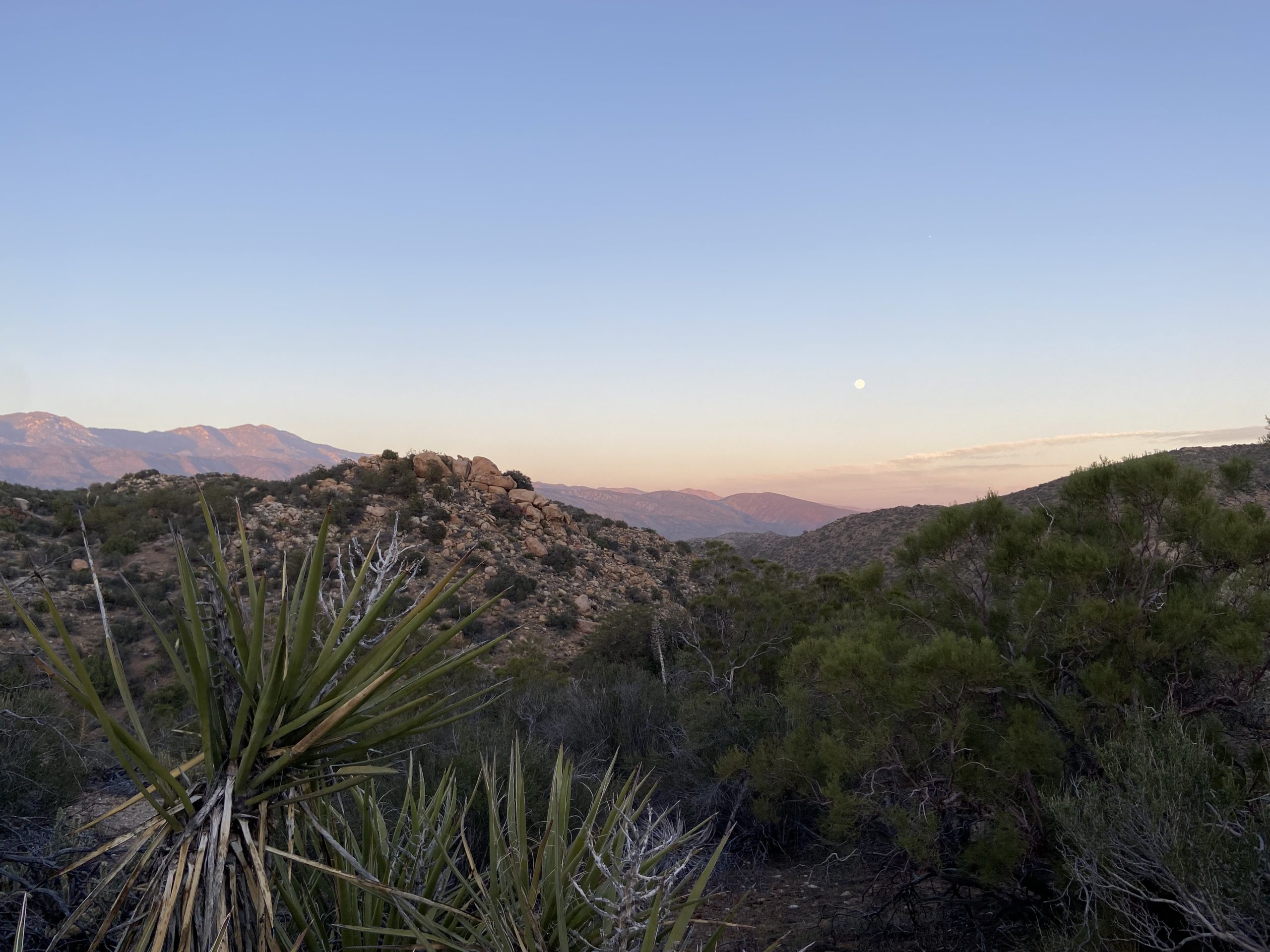 If the first week on the PCT was the honeymoon, the second and third week were a rude awakening. We walked many miles a day and we climbed up to great heights. The climbs were steep. Sometimes we had to struggle under or over fallen trees or other debris. The weather was either extremely hot or super cold. The day we descended from San Jacinto and down Fuller Ridge, for example, I was wearing all my clothes including my puffy. I met the limitations of my body. I still am very lucky in the sense that I don’t have any terrible blisters or major injuries. But there have been days where my energy level has been so low I felt like I was moving through a thick substance. Or where I could only slowly shuffle up the ascents. Being the slowest hiker in my trail family was also mentally tough. 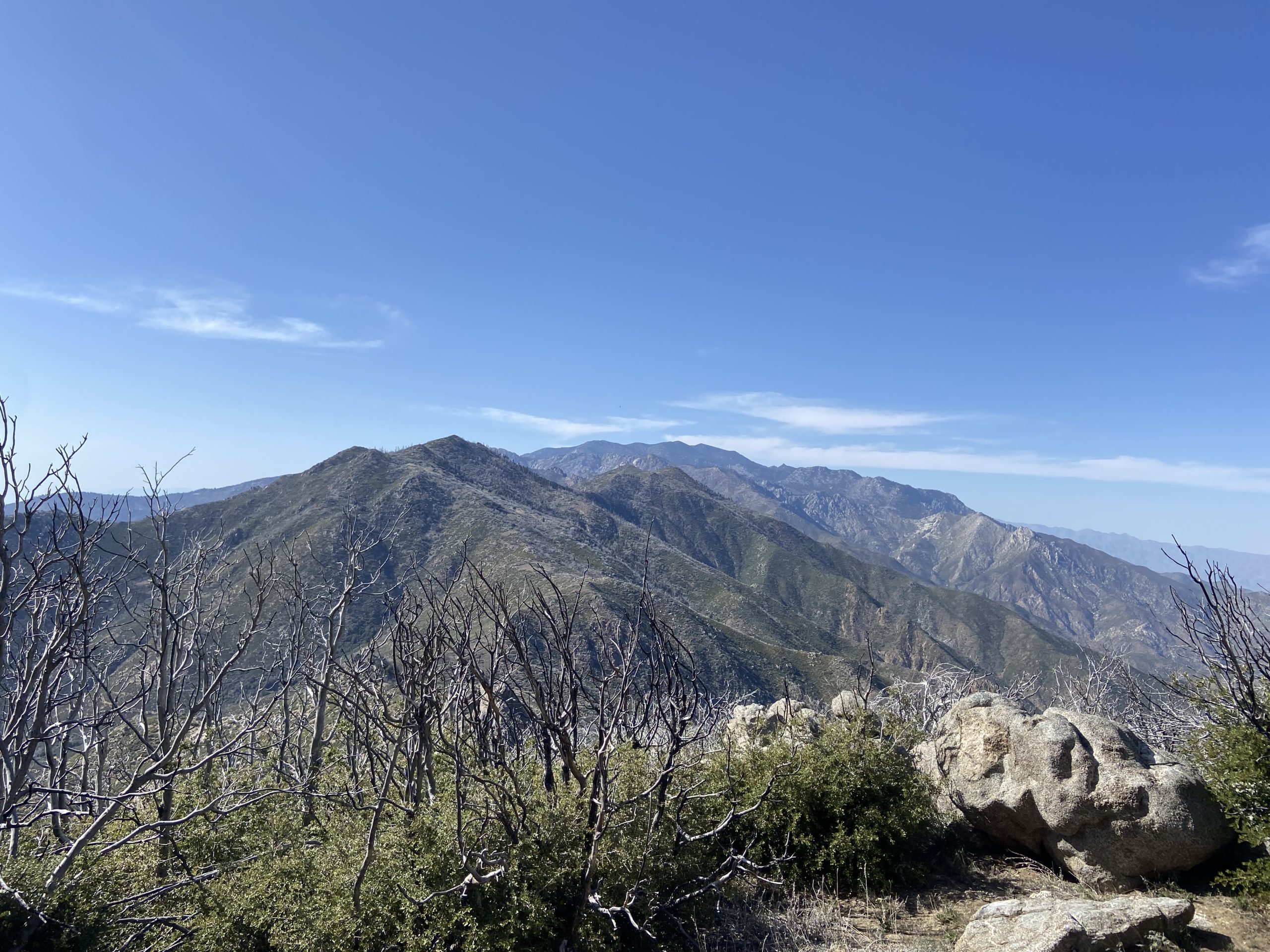 It was another two weeks of conquering fears. I hiked alone from the San Jacinto junction to our campsite that was 3 miles (4,5 km) away. It was late in the day and I watched a beautiful sunset from the ridge at 8943 feet (2726 meters). Then I descended into a rapidly darkening forest. I was carrying 6 liters of waters on my back because the next 20 miles (30 kilometers) we would be without. I was hiking fast, down slippery slopes, barely able to keep my balance with my heavy pack and absolutely terrified of the dark forest and possible mountain lions around the corner. I have never been so relieved as when I heard voices – guiding me into camp. Other fears I overcame were: hiking incredibly sketchy sections of the trail, the path falling apart above a steep abyss and the treacherous slopes of San Jacinto. 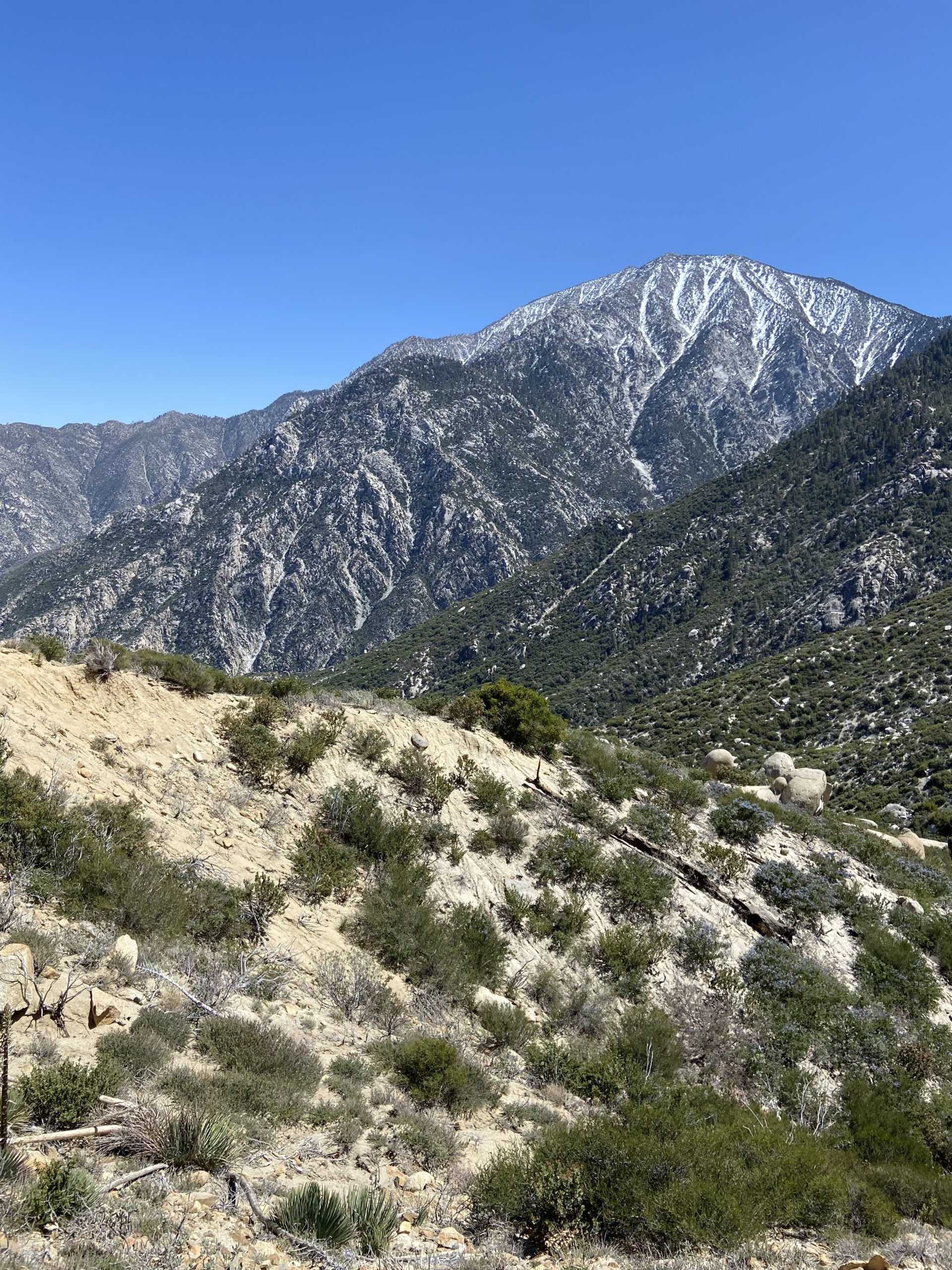 Yet, there have been so many moments of bliss and beauty. Walking through the golden fields full of cows before Warner Springs, right when the sun was going down, lighting everything up in a golden glow. Seeing the terrain change from the desert after Scissors Crossing to the mountainous pine forests and granite rocks of San Bernadino forest.The purple, pink, orange and red flowers. Smelling a Ponderosa pine or Bush poppy’s. Catching the sunset from various mountain ridges. Cooling my feet in the little creeks after Warner Springs or at the Whitewater preserve. Snow-capped peaks in the distance. Discovering cute trail towns such as Julian and Idyllwild with my trail family. 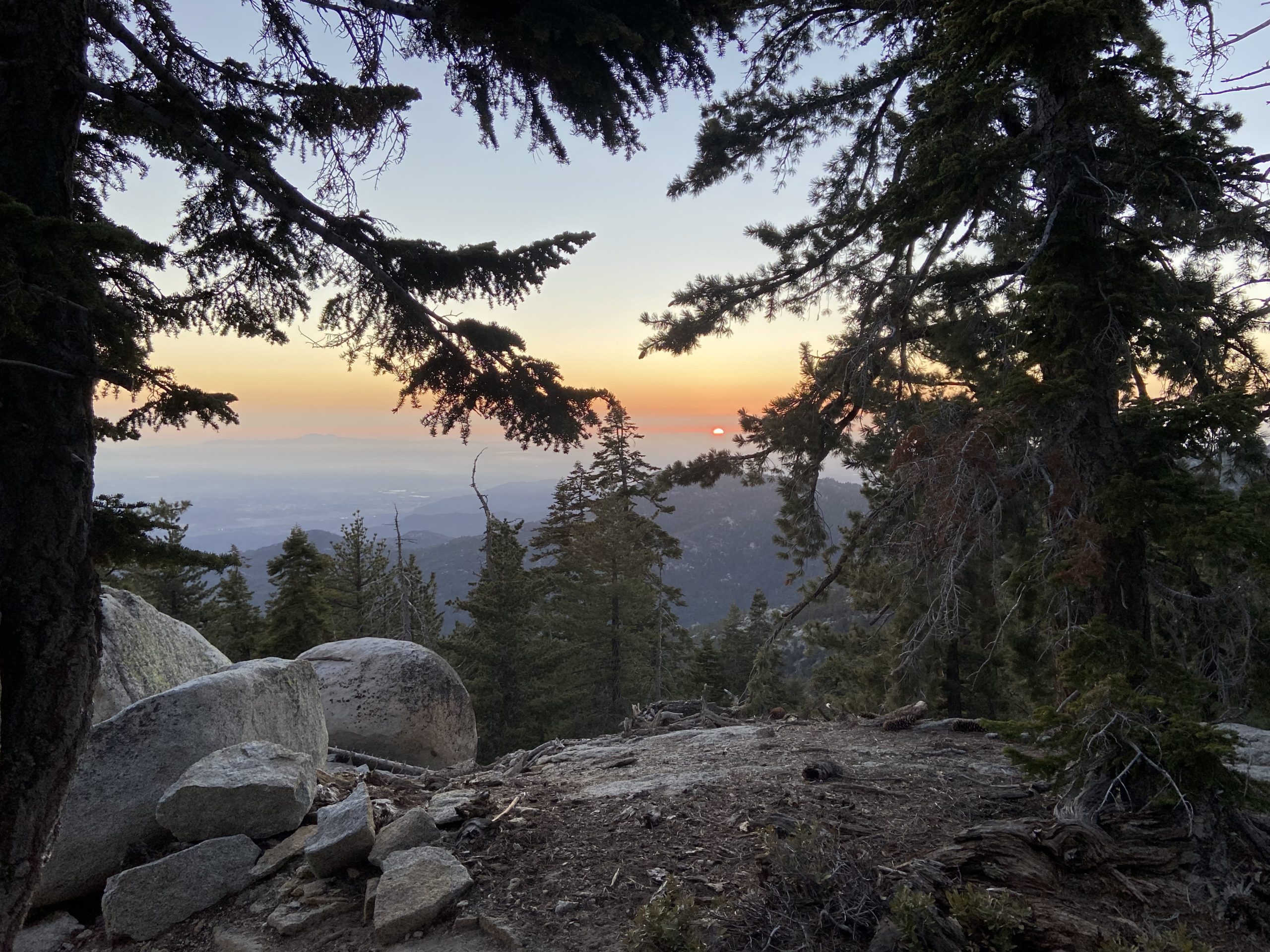 The social aspect of the trail adds another dynamic. There have been so many times where the only thing that kept me going, was the thought that my tramily (= trail family) was waiting at the camp or lunch spot for me. Or being so relieved to have someone else with me on sketchy sections, navigating the difficult to find trail around Whitewater, or the sketchy slopes of San Jacinto. Yet, having to be somewhere at a certain place and a certain time, especially if the mileages are high, add a pressure that can take away the enjoyment and the magic of the trail. I haven’t felt that sense of empowerment or self-reliance that I felt during the first week. Though, I also haven’t felt the sense of loneliness or of being the new kid in class since then. So I’m constantly grappling with the dilemma of staying with the tramily or striking out on my own.

Another hiker told me it takes about 28 days before your trail legs kick in. When your pack starts feeling like part of your body, when climbing mountains no longer leaves you out of breath and when you can push miles without it hurting too much. As I’m embarking on my fourth week on trail, I’m hoping that the physical becomes less overbearing so I can let the mental and spiritual in. 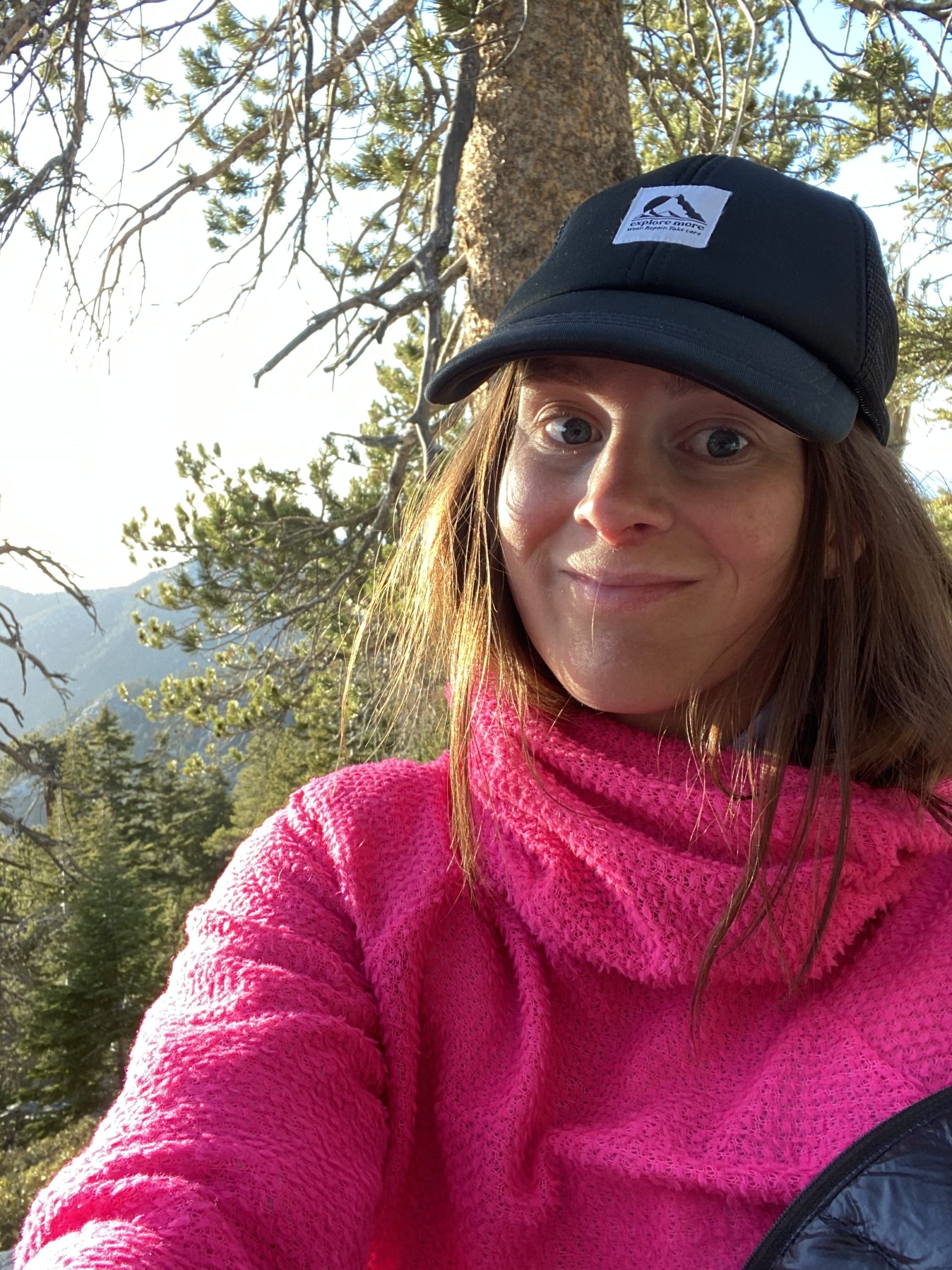 A 30-year-old woman from the Netherlands, exchanging being 6 meters below sea level for mountains. I'm crossing the ocean in 2022 to hike the Pacific Crest Trail. I cannot wait to dress in the dirt, lose my body weight in sweat, eat cold-soaked couscous for 6 months straight and hike many kilometers (oops. miles!) a day. Truly! Apart from hiking, I like fries with mayonnaise, dogs, fantasy books, and did I say dogs yet?!